Funny women are all around us and this week, we’re highlighting Abbi Crutchfield. The New York City-based comedian goes by @curlycomedy on Twitter.

She also can hum and whistle at the same time, which she says sounds something like a tornado siren. If that’s not #goals, we don’t know what is. 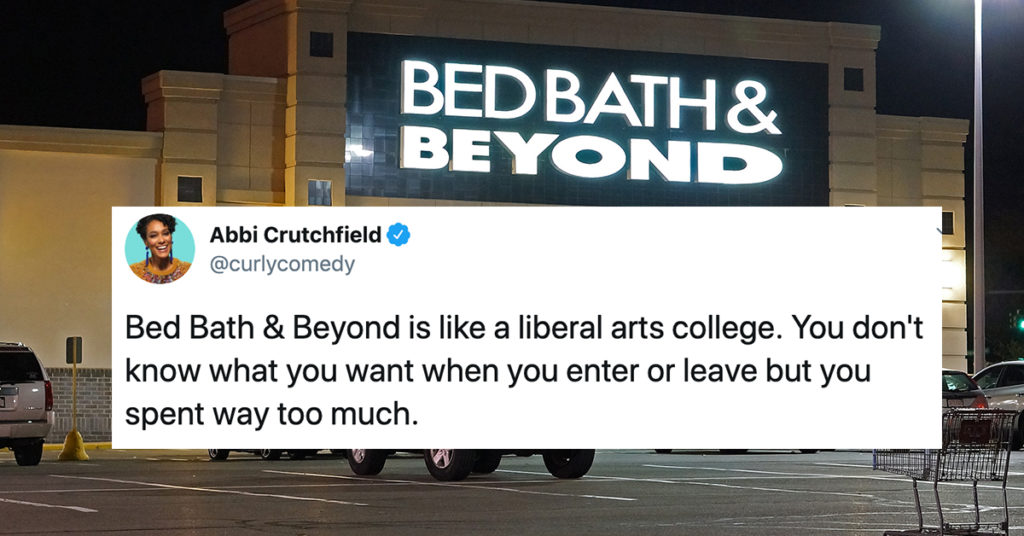 1. What am I doing wrong here?

I can't get rid of my under-eye bags no matter how late I stay up working on a solution.

I had a nightmare my nugget wouldn't fit into the cup of dipping sauce.

Not even Thomas Jefferson could decide on a selfie. pic.twitter.com/FAyBVJJ1qe

It’s addictive, and it kills you slowly. Sugar is a drug. Yes I may be in the pocket of Big Broccoli.

Okay but what if you fool me nine times? It goes back on you, right?

When someone begins, “With all due respect,” stop them right there, because that is as good as the sentence gets for you.

If Die Hard isn’t a Christmas movie why do I spend the holidays hiding in the vents of my workplace?

Me: Last name Ever, First name Greatest
Starbucks barista: I’m not writing that.

People who finish their entire stick of lip balm without losing it first should be the only ones allowed to have kids.

White people don't dance at concerts so they can save all their energy for the "Woo!" at the end of a song.

When I say, "No problem," I mean, "YOU REMEMBER THIS FAVOR FOREVER."

I ran into my old English teacher. He said, "Goode to see ye!"

It's a 'pride' of lions, a 'pack' of wolves and an 'embarrassment' of reality TV stars.

"There are no words." – Early review of my book I haven't started.

Dated the Kool-Aid man once. He trashed a lot of hotel rooms, but to his credit he never disagreed with me.

The Katy Perry song that goes, "You're hot and you're cold," was actually about a microwaveable burrito.

19. It’s a little darker than Candyland.

Clue is a wonderful game that teaches children about murder.

I turned auto correct off and now nothing funny ever happens to me.

At a restaurant I thought a family was praying at the table but then I realized they were all texting.

Someone accused me of spending too much time on the Internet. I don't know what to say. I am so full of emoticons right now.

It's so hot outside the guy across the street's balls are sticking to MY leg.

24. Can we finally admit oysters are gross?

The world is your oyster! Stinky. Expensive. Scary-looking.

Bed Bath & Beyond is like a liberal arts college. You don't know what you want when you enter or leave but you spent way too much.

If it's so normal and well-intended, why don't men tell other men to smile?

👨🏽Let's take our relationship to the next level.
👩🏽This is where I hope you mean something romantic but
👨🏽Let's get a Costco membership!!
👩🏽

I was nervous about trying mushrooms at a party. I mean they were canned for crying out loud.

No one takes baths because it’s impossible to know when they’re over.

Latest posts by Mac McCann (see all)
As an Amazon Associate we earn from qualifying purchases. This post may contain affiliate links from Amazon and other sites that we collect a share of sales from.
502 shares