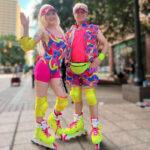 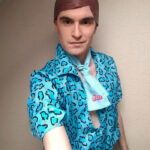 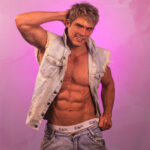 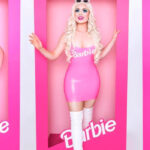 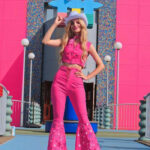 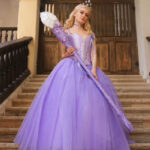 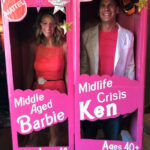 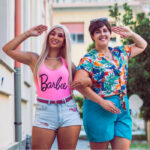 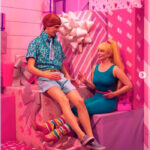 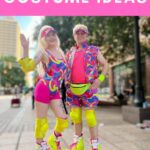 Thanks to the publicity surrounding the upcoming Barbie movie, Barbie and Ken costumes will be some of the most popular looks this Halloween. You may not have the same great hair as Margot Robbie and Ryan Gosling, but at least you can wear the same clothes as them!

Since these characters are dolls, and the whole point is to dress them up in matching clothes, Barbie and Ken costumes come in a variety of different styles. The main thing to focus on when creating your outfit is using bright colors, like pink and neon blue.

Pink is the new pink. You heard it here first. 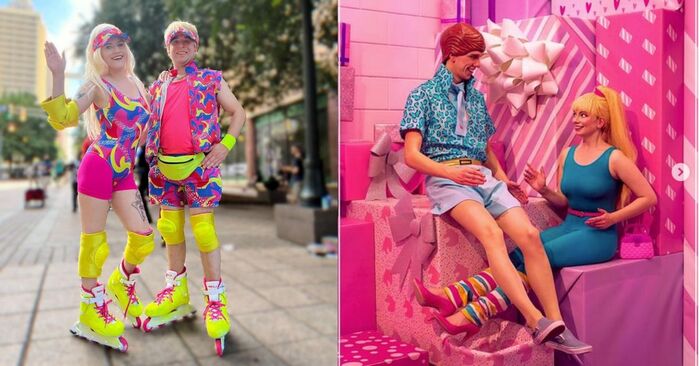 We rounded up the best Barbie and Ken costume inspiration, so all you have to do now is convince your boyfriend to dress up with you. If all else fails, your golden doodle would make an incredible partner. Possibly even better.

14 Ideas for Barbie and Ken Costumes

We’ve all seen the incredible photos of Margot Robbie and Ryan Gosling on the set of the new Barbie movie. It hasn’t even come out yet, but the looks are already iconic. Kris Jenner works hard, but this PR team works harder.

Recreate one of the best looks by wearing vibrant, pink and blue Spandex, lots of neon yellow, and rollerblades. We suggest that you practice rollerblading before you head out for the night. But what’s Halloween without some blood?

Barbie and Ken are leading characters in Disney’s Toy Story 3, and their 80s-inspired looks are a popular choice for Halloween. And the best part is, you might not even need to buy anything to put this costume together! What do you mean you don’t have rainbow leg warmers?

If you’ve got it, flaunt it. And these two have definitely got it. Not recommended if you’re trick-or-treating in the Northeast.

This is an easy group costume because you all can wear the same exact thing. Just be sure to invite a Virgo so they can be in charge of ordering everything.

You get the formula to these costumes by now. Pink. Blue. And for this, something a little tropical. Just like a really confusing gender reveal. With mojitos!

Barbie and Ken, but make them Gen-Z at Coachella. It’s a vibe. Slayyyy. Did we Gen-Z correctly?

For the opposite approach, take Barbie and Ken forward in time to their mid-life crises. To create this costume, you first need to order a couple refrigerators to get two giant boxes. Then you’ll probably want to brainstorm what to do with all those fridges. Don’t forget the pink paint!

Barbie: Princess Charm School is an animated film starring Barbie as Blair Willows, not to be confused with Blair Waldorf. But if you can’t decide between dressing up as Gossip Girl or Barbie, this costume is the best of both worlds. Let’s leave Hannah Montana out of it, though.

She doesn’t just do pink, she does purple, too. There are multiple versions of Barbie princesses you could portray, but this one is from the Barbie and the Magic of Pegasus movie. Obviously.

Another one of Margot Robbie’s leaked looks from the movie is this pink cowgirl extravaganza. It’s nothing new – just go to Nashville and you’ll see at least fourteen bachelorette parties dressed up exactly like this. Further proof that Halloween is a lifestyle.

We’ve never danced ballet a day in our lives and we still want to wear this costume. Who cares if it requires you to put your tree up three months early for the photoshoot? Taylor Swift said it’s okay.

One small step for womankind, one giant leap for Barbie. This isn’t the most practical costume choice, as it requires you to stand in a two-by-two square box. It’ll make socializing quite the challenge! On second thought, it might be the best costume of all. Bring that charcuterie platter over here, will you?

It’s Ryan Gosling. It’s Lance Bass. It’s…Ken? Whoever it is needs to give us the number of their personal trainer. Abs sold separately.

Life in plastic, it’s fantastic. Until your head starts chafing.

Latest posts by Laura Davis (see all)
As an Amazon Associate we earn from qualifying purchases. This post may contain affiliate links from Amazon and other sites that we collect a share of sales from.
15 shares