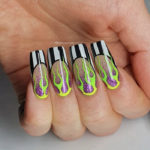 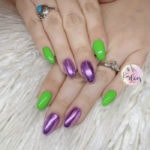 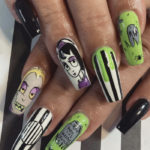 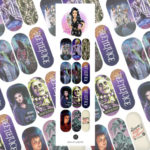 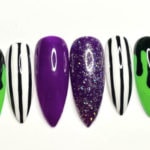 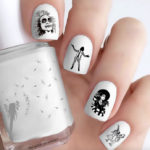 When it comes to Halloween nail art, Beetlejuice is a fashion icon. Maybe not the actual bioexorcist — unless vertical stripes are your thing – but, his purple and green color palette is to die for. Same goes for Lydia Deetz’s goth aesthetic. So, here’s more than a dozen Beetlejuice nail ideas that pay homage to the 1988 film.

Because covering your entire house in Beetlejuice decor wasn’t enough.

From images of Barbara and Adam Maitland and nail designs based on the cartoon series to more Sandworms than Saturn could handle, there’s something for everyone. Except Otto. 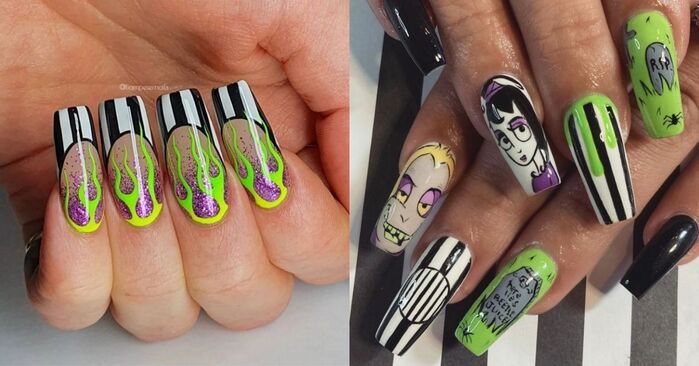 14 Beetlejuice Nails That Are Just Strange and Unusual Enough

Keep things classic with a black and white color palette that reflects Lydia’s monochromatic wardrobe. These nail decals that feature Lydia, Beetlejuice, and the Maitlands are just understated enough to pass by a family reunion unnoticed. 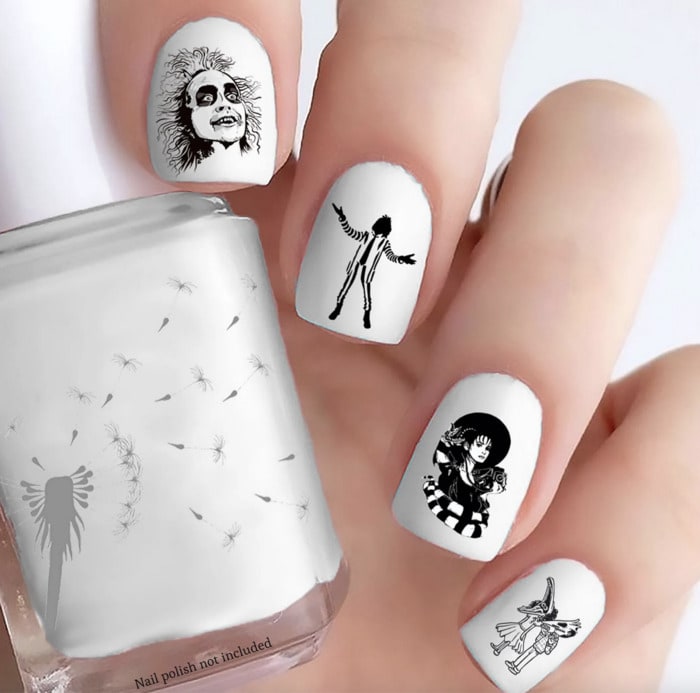 Drippy nails, simple stripes, and a little pop of purple glitter give these Beetlejuice press-ons a glam update. Personally, we think that Michael Keaton could have benefited from a little glitter too.

Let everyone know that you were a 90s kid with the cartoon version of Beetlejuice and Lydia on your nails. Since it’s still not streaming anywhere, you can make up scenes using these nails. Just like we made up having friends as a kid.

This subtle ode to the movie says, “I’m a lady in the streets but a freak in the Essie aisle at Walgreens.”

These nails are fire. Like, wildfire. (GOT fans? Anyone?) Add some of these neon flames to your fingertips, and then say “careful, those are hot!” every time someone tries to shake your hand. It’s never too early to start on your dad jokes.

These nails wraps featuring all the main characters are perfect for the person who wants an intricate manicure without having to sit at a salon and pay an electric bill’s amount of money for it. Oh wait, that’s all of us, right? 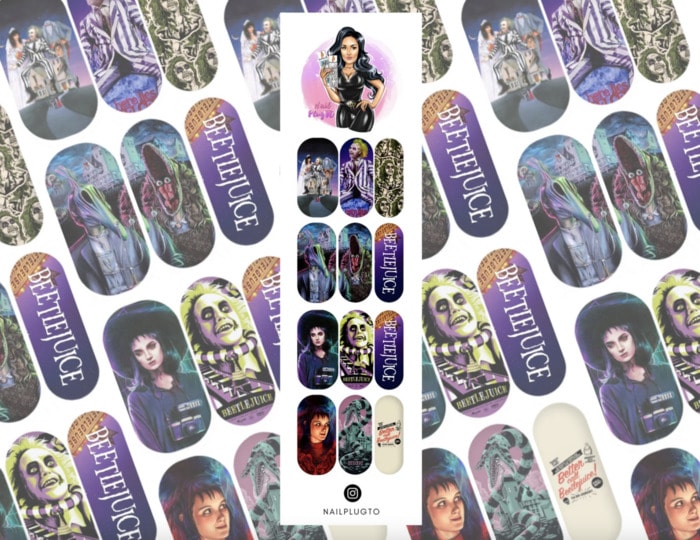 If you love to go all out with your mani, go for this one featuring the scary distorted faces of Barbara and Adam Maitland. It says, “if you come any closer, you will find out if my nails actually bite.” (They missed breakfast.)

Planning on going camping or to a bonfire this spooky season? Take a hands-on flashlight with these bright glowing nails! It’ll make it much easier for your friends to find you in the woods when you take a wrong turn and encounter Mr. Voorhees.

If you’re looking for something a little more understated, these simple black and white stripes have understood the assignment. It says, “the monster isn’t here yet, but I do have Michael Keaton on speed dial.”

It’s Halloween, so there’s no better time to opt for these long, witchy nails. Just keep the Sandworm away from Beetlejuice unless you want a battle on your hands.

For a subtle nod to the animated show, try this look that features purple glitter nails, green slime, and strips representing the Ghost with the Most’s iconic black and white suit. Yes, we just suggested green slime was subtle. Could have been red!

A post shared by Sanctuary Spa at Tradition (@sanctuaryspatradition)

These nails don’t have to say Beetlejuice. They could say, could you cook tonight instead of ordering Doordash again? But then they’d be talking nails and that seems like a larger problem.

When he’s good he’s very, no we take that back. He’s always terrible.

You know it’s time to move when Beetlejuice and the Sandworm have merged to become one. No you can’t borrow any sugar.

If you want to try doing your own at home vs at the salon follow this tutorial.

Latest posts by Leah Mulroney (see all)
As an Amazon Associate we earn from qualifying purchases. This post may contain affiliate links from Amazon and other sites that we collect a share of sales from.
4.5K shares