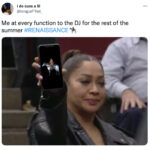 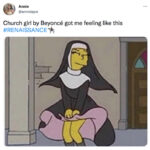 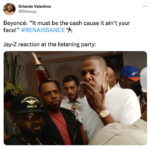 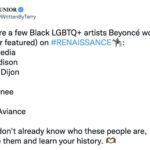 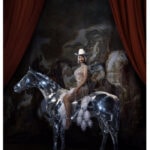 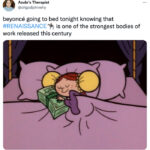 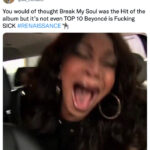 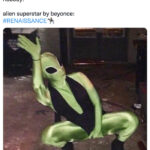 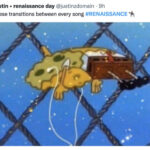 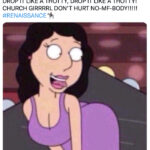 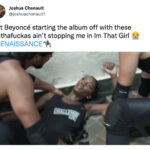 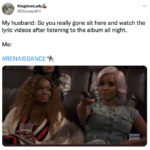 While the rest of us were holed up in our apartments during quarantine deciding whether to watch Schitt’s Creek for the fourth time or play Animal Crossing until our eyes bled, Beyoncé was making new music. Her newest album, RENAISSANCE, dropped on Friday, July 29, and Twitter lost some sleep.

How much sleep? Well, take a look at these RENAISSANCE memes and tweets to see. 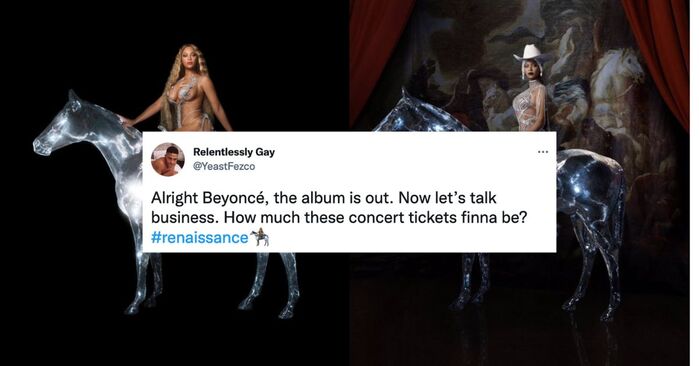 “Creating this album allowed me a place to dream and to find escape during a scary time for the world,” Beyoncé wrote in a post on Instagram, explaining that the album was entirely recorded during the pandemic. We found escape by plowing through yet another bag of chocolate-covered pretzels, but we respect the hustle.

In response to the release, fans are exuberant. It’s been six years since the drop of her last studio album, Lemonade, but rest assured: the Queen Bey has still got it. With 16 tracks, the album is full of music that makes you want to dance like nobody’s watching. We bought new curtains just in case.

From responses to fan-favorite songs like “CHURCH GIRL” and “AMERICA HAS A PROBLEM,” to discussions about the legend that is Beyonce herself, bask in the pure joy that is album release day. If you need us, we’ll be twerking in that corner over there.

The Best Memes and Tweets about Beyoncé’s RENAISSANCE

1. The audacity to even try. 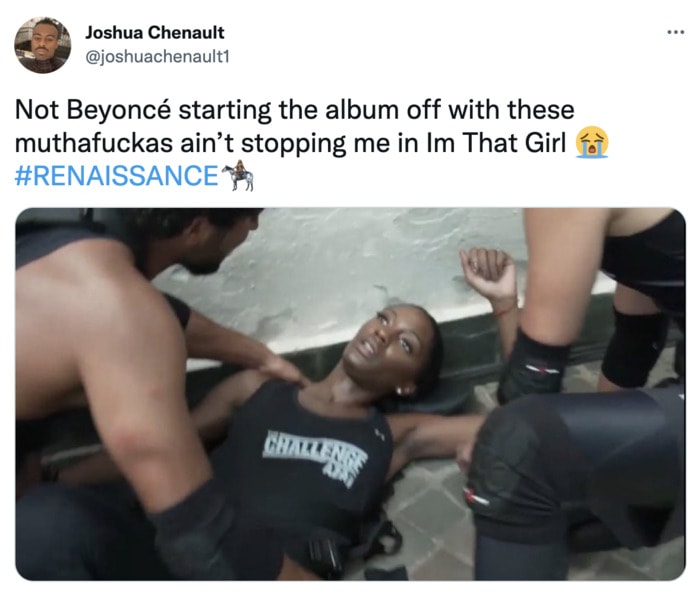 2. Mood, all day. We closed the office door for good measure. 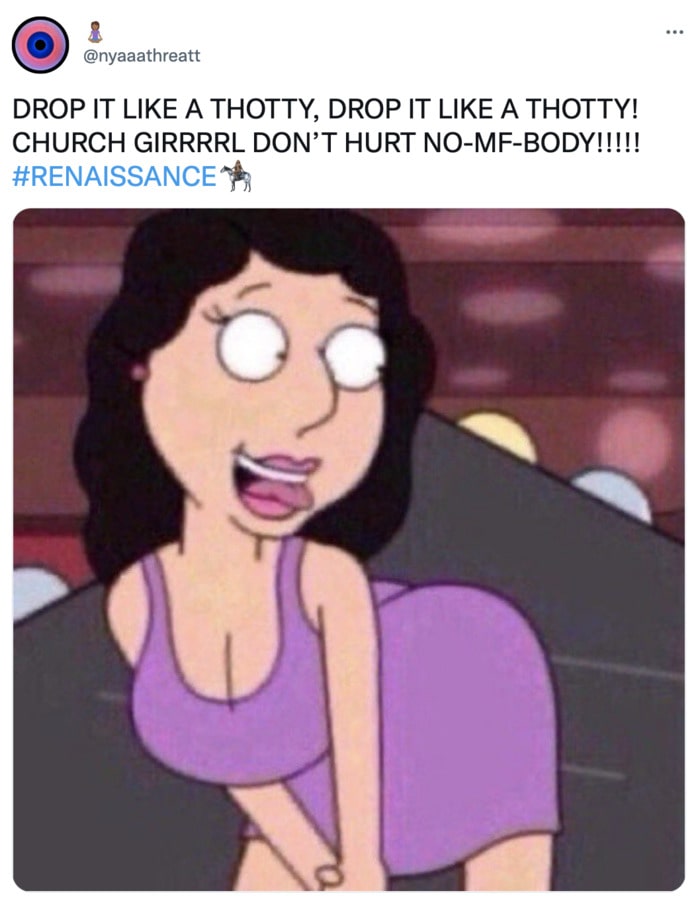 3. It makes pausing difficult, but makes escaping Vecna a breeze. 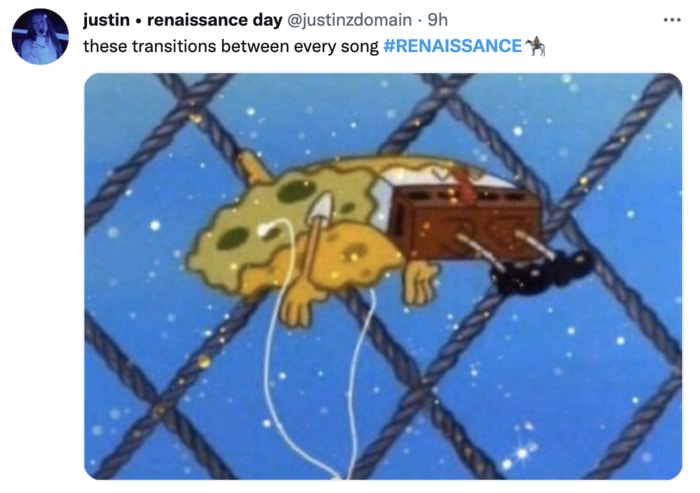 4. beyoncé gave us a new album *and* a Halloween costume idea? Legend. 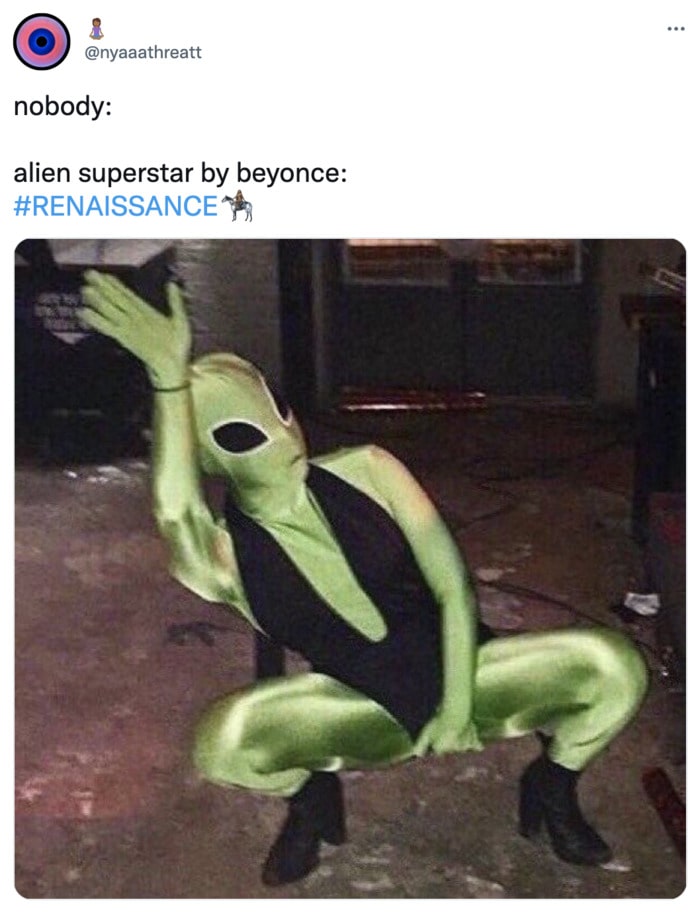 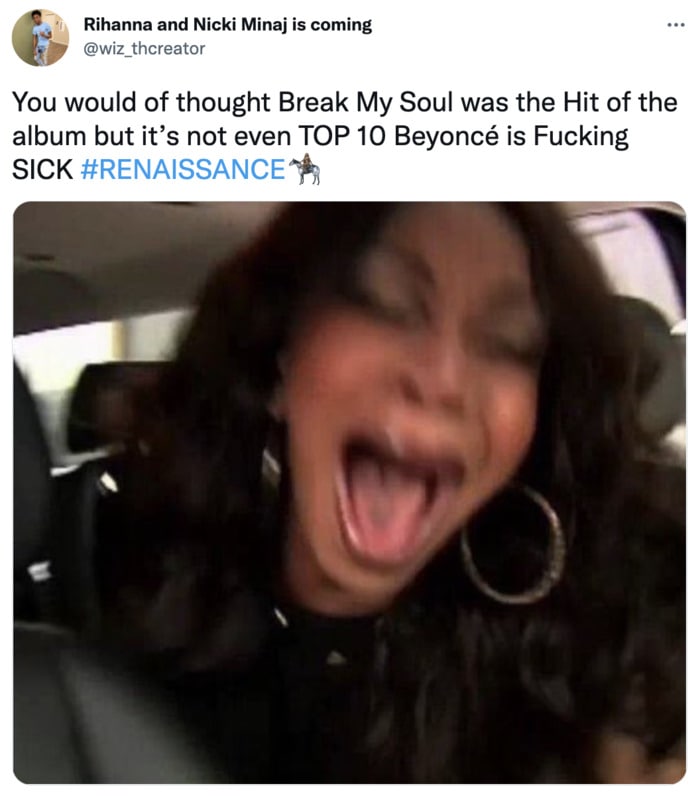 6. Celebrities are just like us. Just replace the money with a bag of Hot Cheetos. 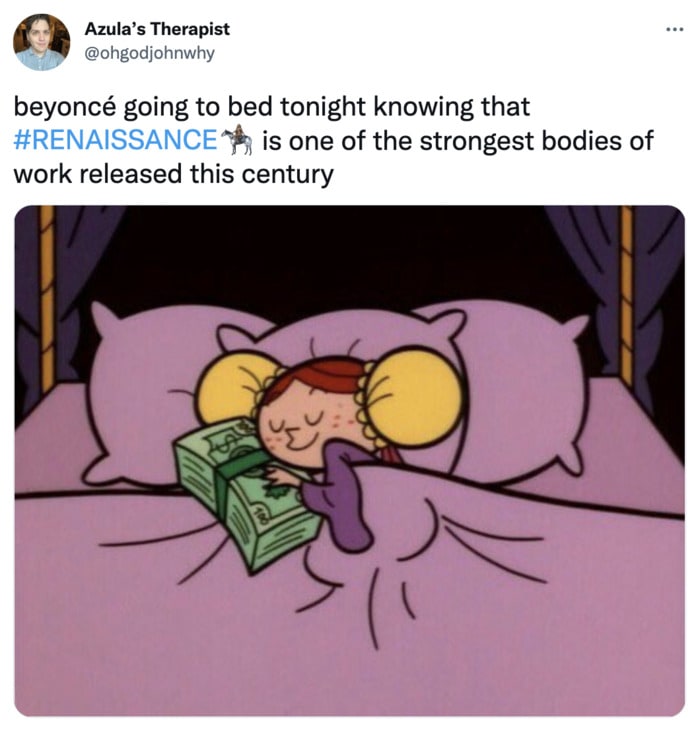 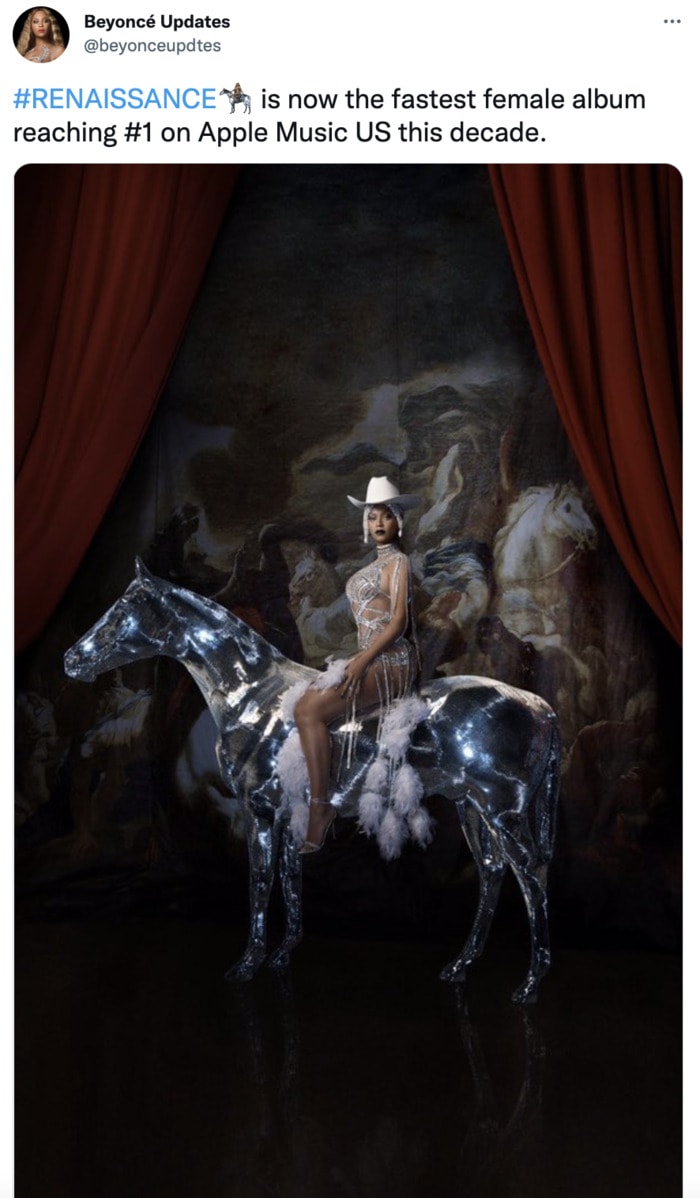 8. Don’t forget to close the studio door on the way out, boo.

Jay-Z: Can I record a verse for your album?
Beyoncé: #Renaissance pic.twitter.com/lgBgr8DuU4

9. When you get an education and a chart-topping album all in one. 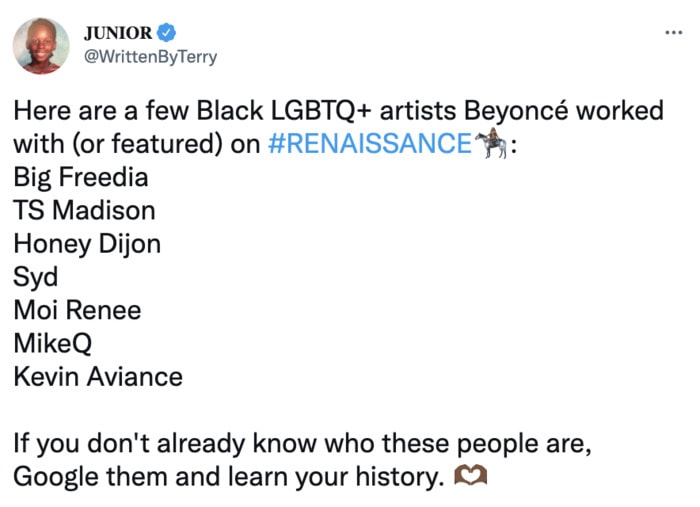 this album gone have me feelin like this walkin around with my headphones in 🤣 #Beyonce #RENAISSANCE pic.twitter.com/Tiosay4HQC

11. We don’t understand the question. 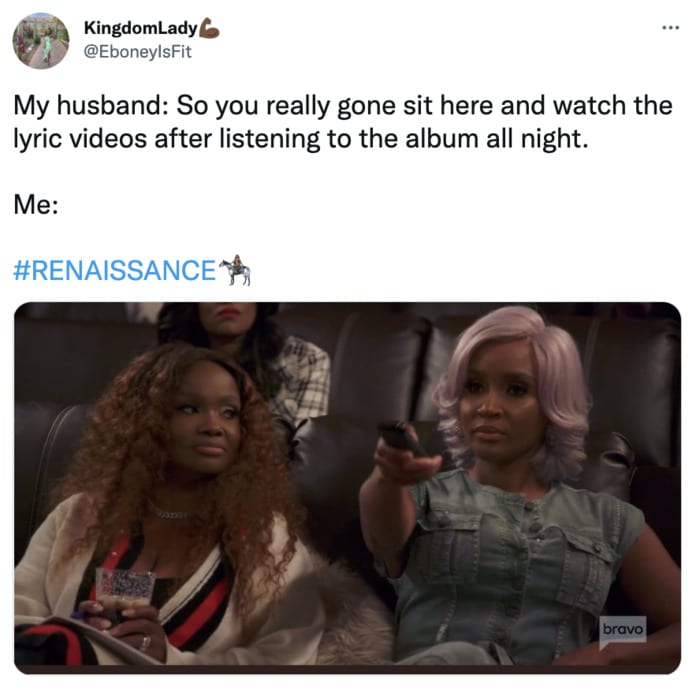 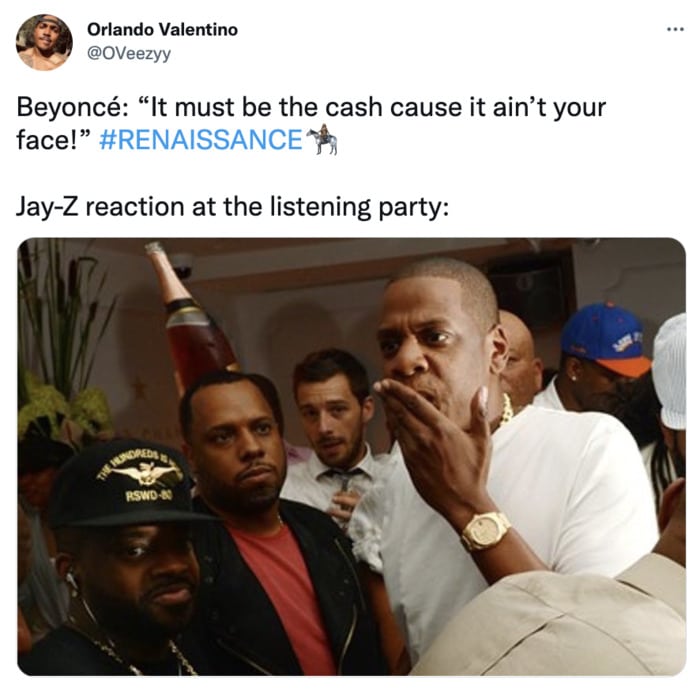 13. Legend says that day is now a national holiday.

This how Beyoncé left the studio when she finished this album.#renaissance pic.twitter.com/W8Dm3ghV2N

14. Ugh, and we just donated our habit to Goodwill. 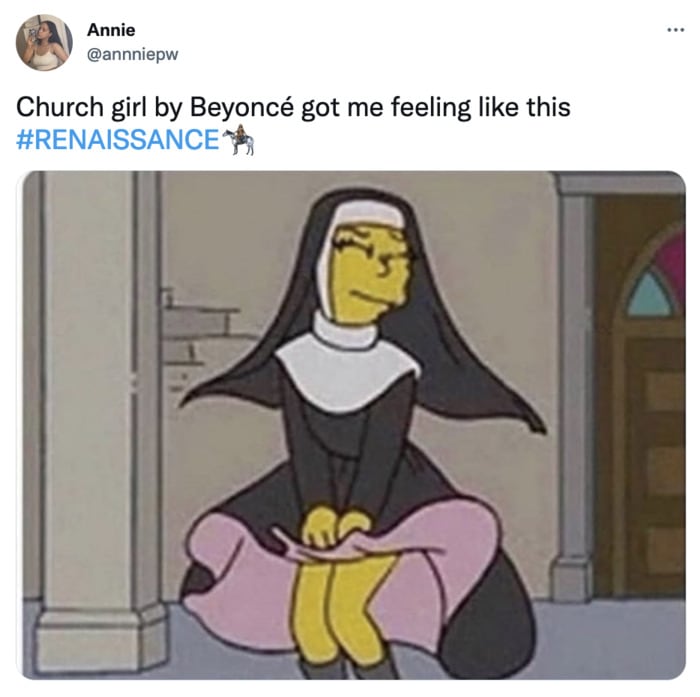 This woman really said “America Has A Problem…it’s not student loan debt, it’s that I’m too bad of a bitch and the kids can’t handle it.”

16. All before our first coffee, too.

she really got me out here throwing ASS at 1 in the morning #RENAISSANCE pic.twitter.com/kjJvbJqNos

17. Translation: how many mortgages do we have to take out?

Alright Beyoncé, the album is out. Now let’s talk business. How much these concert tickets finna be? #renaissance pic.twitter.com/2tEor54I1G

18. As long as our Crocs make it into the new dimension, we’re good.

Me saying goodbye to the world we currently live in before Beyoncé resets everything tonight #RENAISSANCE pic.twitter.com/qSyfMS13KC

how it feels to be a "BLOW" beyoncé stan rn pic.twitter.com/bwEpEg0kun

20. We won’t be taking any other requests, please and thank you. 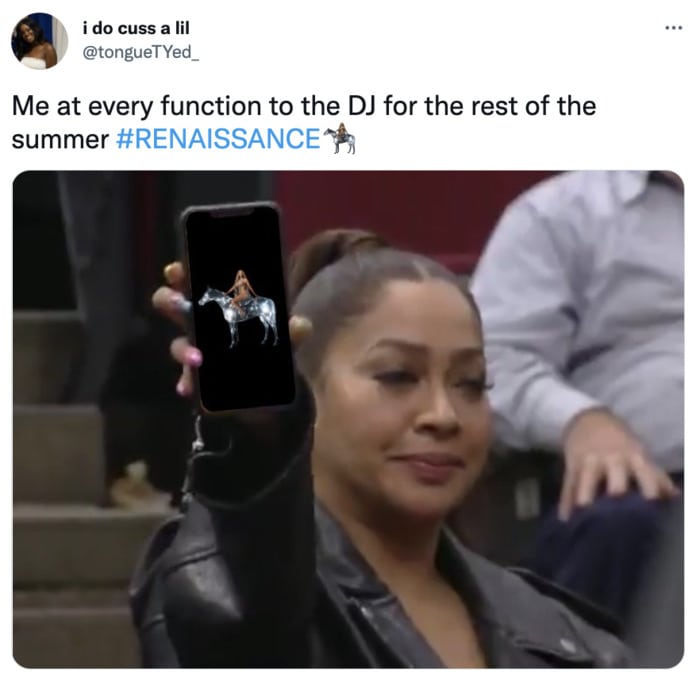 Just finished #RENAISSANCE and my soul is happy. My heart is full. My ass is ready to shake. Life is good. pic.twitter.com/ISD5Ho47l9

22. It’s time for our inner xenomorph to shine.

Me heading to the dance floor when they play Alien Superstar #RENAISSANCE pic.twitter.com/hIeoVF1s3x

23. We appreciate the sentiment, but um, no.

If this what Beyoncé was doing in the house the whole quarantine, LOCK US BACK UP!!!!!!

24. What noises are the ghosts making in your house?

I know yall really think we be gassing up Beyoncé but yall she really dont have peers. She is competing with her elders and ghosts.

25. Oh, crud. All out. Maybe she will accept a charcuterie plate?

BEYONCÉ IS COMING FOR BLOOD pic.twitter.com/YZdrm4cBKb

Latest posts by Laura Davis (see all)
As an Amazon Associate we earn from qualifying purchases. This post may contain affiliate links from Amazon and other sites that we collect a share of sales from.
18 shares