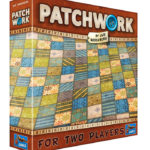 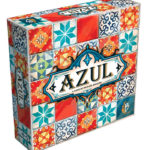 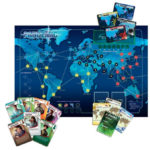 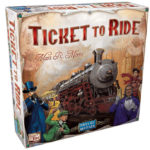 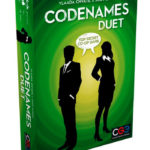 Anyone in a relationship knows that it can be hard to find board games for two people. And yes, you and your roommate’s bond counts as a relationship. Just not your cat in this case…that pesky lack of opposable thumbs!

Sure, you could drag out Monopoly again. But after the Park Place/Boardwalk disaster of ‘08, we understand if you’d prefer to let that one continue catching dust. 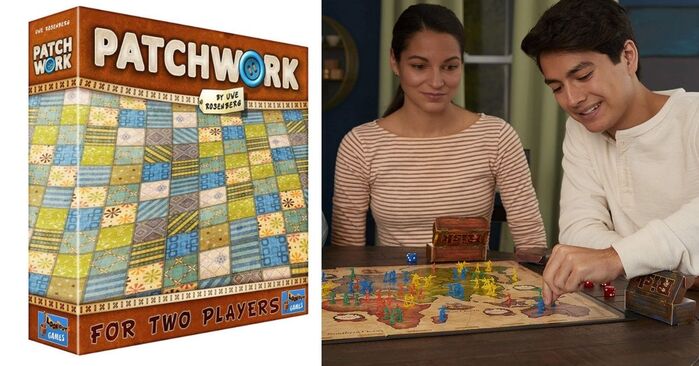 Two-person board games may be few and far between, but they’ll actually easier to find than all those missing bobby pins. If it’s high time for you to update your game closet to include more than just Parcheesi and a version of Life that’s missing half the pieces, read on.

Just don’t come crying to us if a heated round of Ticket to Ride ends up with someone on the couch. You’ve been warned.

These Are The Best Board Games for Two People

Don’t be fooled by the Disney affiliation: this game is utterly ruthless. One of the coolest parts about Villainous is that everyone playing has a different objective. This element means that every time you play as a new character, it feels like a whole new game.

And if you’re playing with your boyfriend, it’ll bring you back to countless conversations you’ve had about what’s to eat for dinner.

The original pack comes with six villains that you can play as: Maleficent, Ursula, Jafar, Prince John, Queen of Hearts, and Captain Hook. There are currently three available add-on packs, too, so if you get bored of stealing the voices of mermaids, you can add new villains to the mix.

There’s even a Marvel version with its own expansion pack. Get your snapping fingers ready. 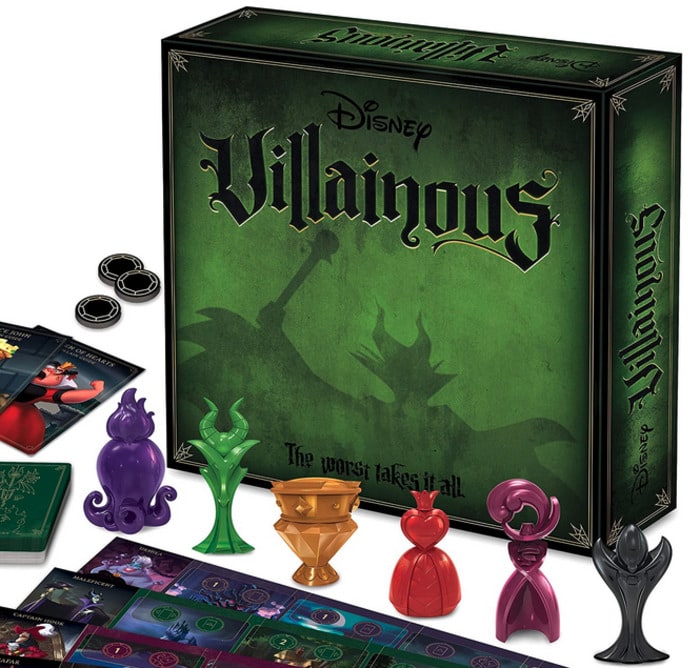 Codenames is the classic party game that now comes in a version suitable for two players. However, if you constantly scored low on “plays well with others” in school, this game probably isn’t the best for you.

Codenames Duet has more of a teamwork vibe than a competitive vibe. But for fans of Wordle and other word-association games, it can’t be beat. 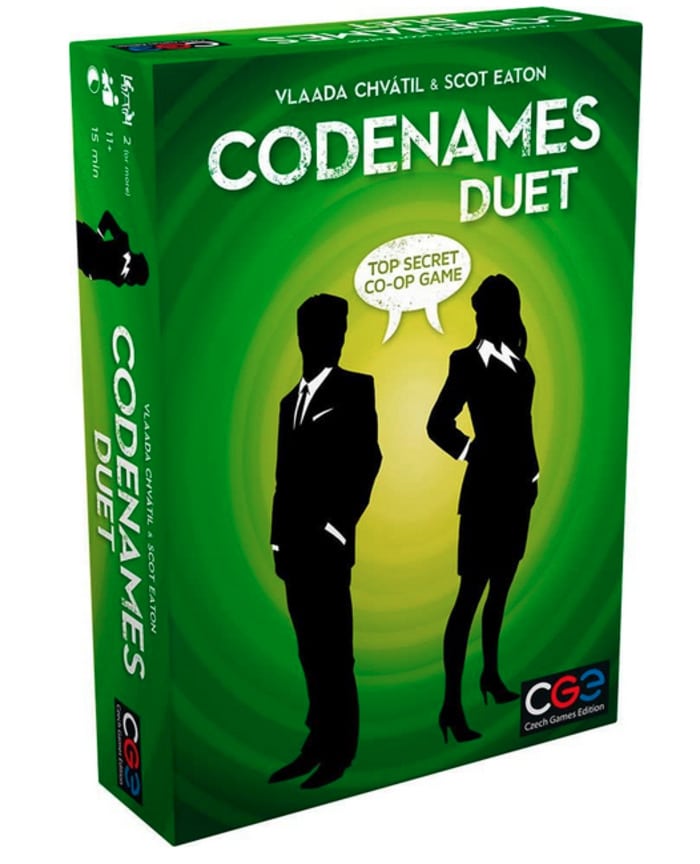 This game involves light strategy, puzzling capabilities, and will make you feel like maybe you could really design your own quilt someday. You artist, you.

It’s exclusively designed for two players, so it’s not one of those games that says two to four, but is actually way more fun with four. Kind of like how we say we like both cats and dogs but, we’re definitely not trying to go on walks at 5am in the cold.

Patchwork is easy to learn, has an average game time of 30 minutes, and is oddly relaxing. It’s a spin on Tetris, so there’s something nostalgic about it, too. You just can’t play this one on your calculator in the middle of Math class. 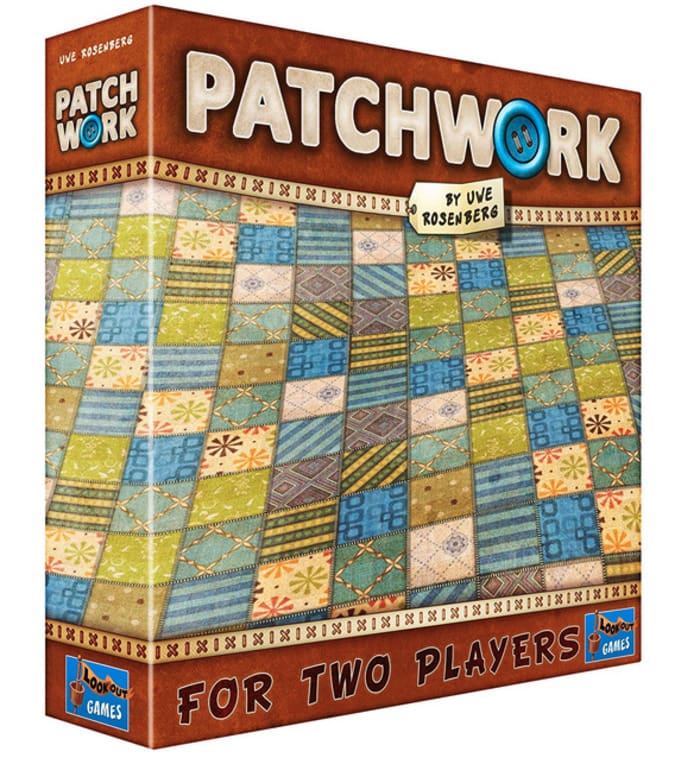 This quick-moving take on Scrabble is perfect for two players, can accommodate up to eight, or you can play it alone! Perfect for those self-care nights with your cheetah face mask.

The objective is to create your own crossword with the 20 tiles you’re randomly assigned. And yes, the words have to be real. Darnq.

As people complete their boards, they have to take one more piece from the remaining pile. So Bananagrams can really be extra fun with less people since it makes it last longer. Unless chaos is your thing.

Have a dictionary on standby, and don’t skip a day of Wordle in preparation.

If you’re an avid board-gamer, you might be surprised to see this classic group game on the list. Although often played with multiple people, Ticket to Ride is equally fun for groups of two. Unlike trying to make the world’s largest pizza.

The goal of Ticket to Ride is to create several cross-country train tracks based on the cards in your hand. But you need to make sure that you don’t let on where you’re going, lest your opponent sabotages you. If you fail to complete a track in your hand, you lose points.

It’s easy to learn and with only two players, and you’ll probably find yourself less frustrated by the heavy traffic preventing you from completing your routes. We can’t help you on I-95, though. 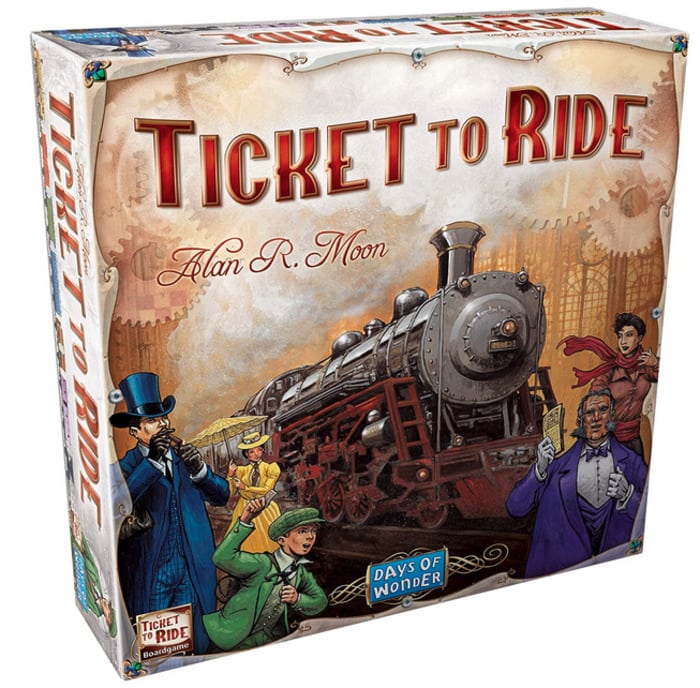 It’s classic. It’s fun. And it dominates Amazon’s board game bestseller list for a reason. Their promotional Instagram Reels are just so good!

Battleship is easy to learn, quick to play, and it’ll have you coming back again and again for yet another rematch. Plus, a round of Battleship happens to be how we found out our brother has x-ray vision. 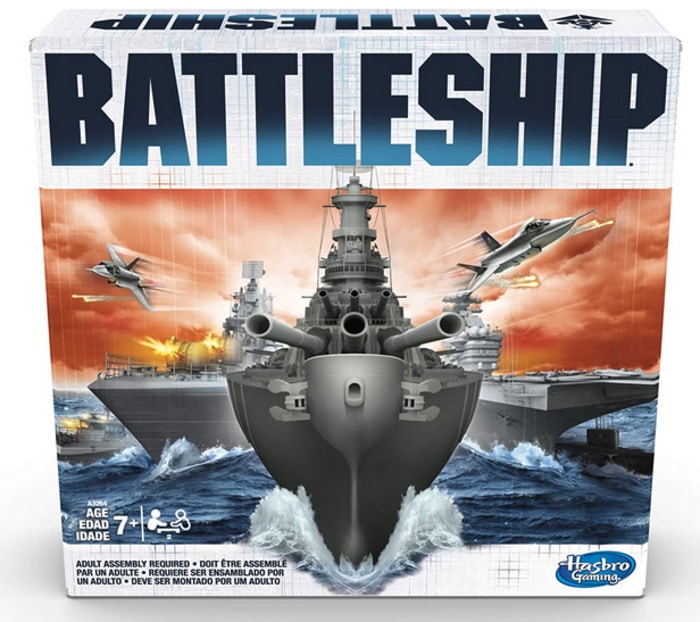 Everyone knows about Settlers of Catan. But have you heard about Rivals for Catan? It’s the two-person take on the strategy card game.

This version takes between 45-60 minutes to play on average, and it’s not too challenging to learn. Unless you’re three beers deep, in which case…best of luck.

If you’re a fan of Catan but find it challenging to convince three other people to play with you, you’ll like Rivals. It comes with its own expansion packs, too, so you’ll never tire of the gameplay. Unless that fourth beer is a double IPA. 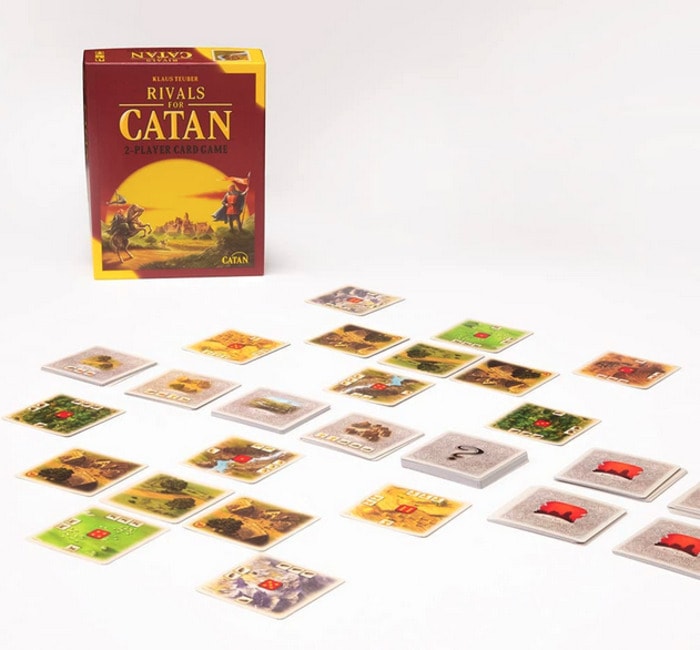 For Risk, you need a strategy, some diplomacy, a healthy dose of competition…and a schedule free of literally any other conflicts. Seriously, Risk can take forever.

So if you want to keep things moving at a quicker place, opt for just one partner. The objective is still the same: capture the territories from your fellow player. And maybe steal the last slice of pizza while you’re at it.

Make it even more fun by opting for the Game of Thrones board. Naturally, we call Targaryen. Finally, a second reason to use our flame gun. 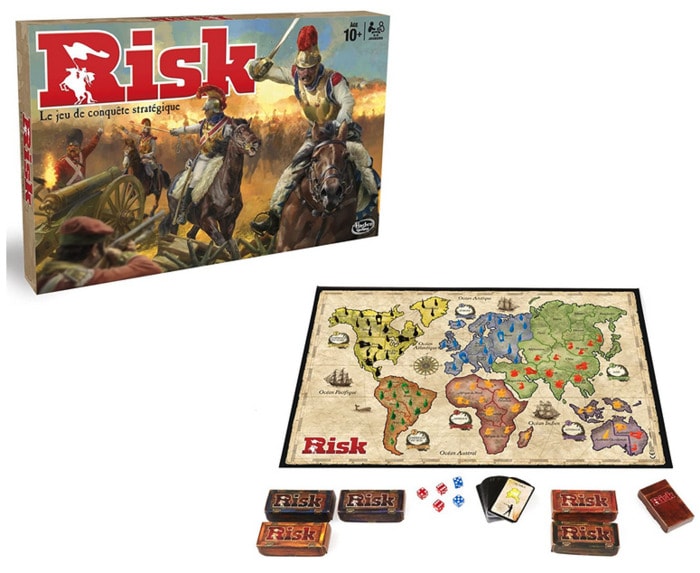 Spend some time living in an alternate reality without going full-on Inventing Anna. In Azul, you play as dueling artisans attempting to impress the King of Portugal with your tile designs. The better tiles you use, the more points you’ll get.

Azul is a fun two-person board game because it’s easy to learn while still being repeatable – every game will yield a new set of tiles. You can play with up to four people, so now you know what to do if that upcoming Bumble BFF date goes well. 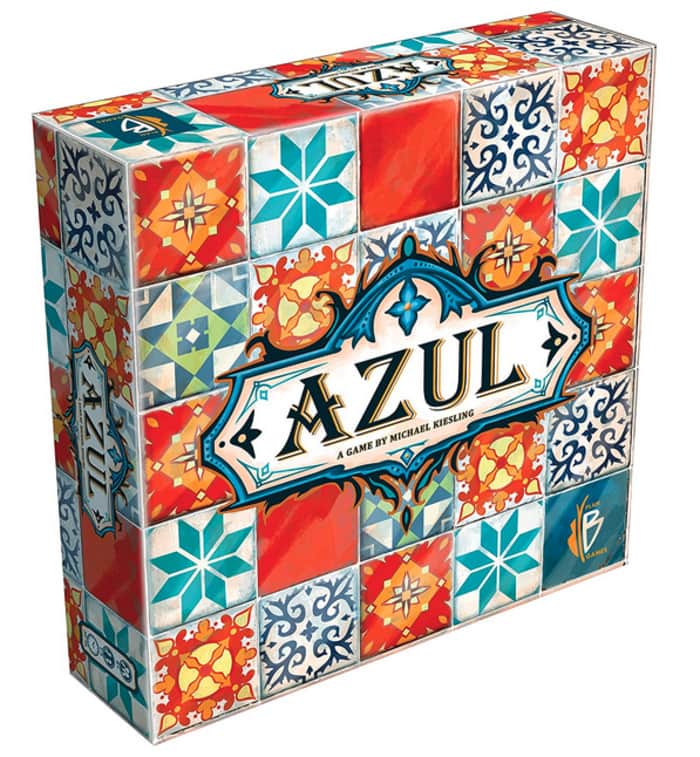 If you can look past the premise of this game (might we suggest a rename to 2020?), Pandemic is beloved by many for good reason. Plus, the world leaders could, frankly, use some advice.

The Pandemic series of games are great board games for two people, but it can also be scaled up to enjoy with four players. It combines strategic elements with cooperative game play, meaning you and the person you’re playing with are on the same team.

You have to work together to come up with a cure, build research centers, and stop the spread. So pass the social distancing card! Or…don’t? 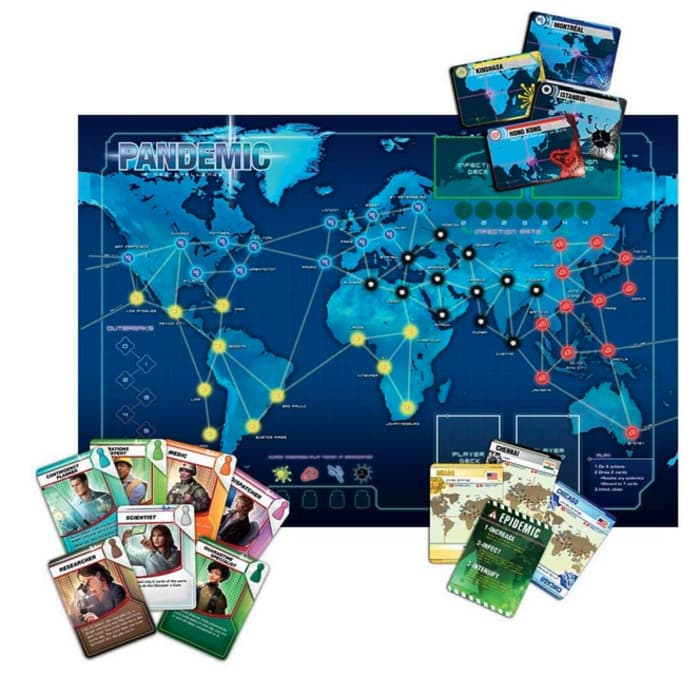 Latest posts by Laura Davis (see all)
As an Amazon Associate we earn from qualifying purchases. This post may contain affiliate links from Amazon and other sites that we collect a share of sales from.
3 shares