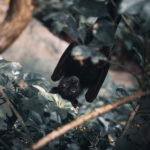 If you’ve been frantically Googling “can I have a pet bat,” you’re not the only one. Exotic pets are trending in a big way. After all, why pose with a plain old dog on Instagram when you can cuddle up to a venomous arachnid or a wild otter?

Owning an exotic pet can be a thrill, but unfortunately it’s the same kind of thrill as taking an Uber ride with a 1.5-star driver.

Exotic pets are way more hassle than they seem — and if you don’t have enough time, money, space, and know-how to properly care for them, you could be putting yourself and the critter in danger. And based on how your fiddle leaf fig is looking these days, caring for an exotic pet probably isn’t in your wheelhouse.

So if you’re itching to bring a furry (or scaly) new friend into your life, think twice before adopting these terrible exotic pets.

Can You Have a Bat As a Pet?

You can…but we don’t recommend it. In the wild, bats are furry little superheroes — killing mosquitoes, pollinating fruit trees, that sort of thing. In your house, they’re just critters with scary fangs and tiny claws that can get tangled in your hair.

And while bats can live up to 25 years in the wild, pet bats rarely survive more than a year in captivity because it stresses them out. If you have a pet bat, email sanctuary@batworld.org and they will come pick it up, no questions asked. Unfortunately, they only pick up bats. If you need to get rid of that aspiring screenwriter who’s been crashing on your couch for the past three weeks, you’re going to have to do your own dirty work.

Need something to satisfy your inner goth? Get a black cat or dog from a shelter. They’re the least likely to be adopted and most likely to be put down.

Sure, they’re cute. But a hedgehog is basically a hamster with quills — and while you may have visions of your pet hedgehog rolling into a ball and attacking your enemies like Sonic, those prickly quills can spread icky bacteria like salmonella and hand-foot-and-mouth disease.

However, when hedgehogs need to power-up their protection, they eat poisonous plants, produce a frothy saliva, and lick their spines to coat them in poison. This is called “self-anointing” — similar to how you self-anoint with patchouli, but this wards off predators instead of warding off potential dates.

Hedgehogs are also nocturnal, will literally die if they have dairy, and have been known to occasionally eat their own babies and fight to the death. Bottom line? Stick with a standard, non-spiky hamster.

Foxes have become a trendy pet thanks to some Instagram influencer foxes, but their photogenic skills will only get them so far. Hear that? Only. So. Far.

These pricey models need an enclosure that’s at least six feet tall and twenty feet wide, with plenty of room for running and digging. Do you have a whole extra apartment lying around somewhere? How do you feel about ball pits?

Anyway, foxes also smell terrible. This a good time to remind you that foxes have very cute, domesticated cousins called dogs. Get one of those.

Most Likely to Ruin Your Furniture: Pet Goats

We’ve all seen those adorable videos of baby goats learning to jump.

But before you get inspired to call your local goat farm, hear us out. Goats will eat your shoes, eat your hair, and eat that Ikea dresser you built with your best friend. (It was a total bonding experience, and it’s so weird that she’s suddenly “too busy” to help you build another one.)

Goats also pee everywhere. When your pet goat is ready to mate, it’ll even pee on itself like the worst Hinge date ever. Those cute YouTube videos don’t warn you about all the peeing.

Vet tech Kelly Engler says goats need a lot of enrichment — and like a Roman emperor, if they’re not sufficiently entertained, they’re going to start destroying some shit. Do you really want a tiny Nero in your house? Do you?

We get why you want a sloth. They’re cute, they move in slow motion, and those long arms were made for hugging.

But sloths can cost thousands of dollars, and that’s before you build their enclosure — which needs to be staggeringly large, says Taylor Blakin, a former vet assistant.

Plus their digestive system moves in slow-mo too, which means they only defecate once a week — and when they do, their poop can be up to 40% of their body weight. Skip the pet sloth, unless you’re in the market for a pet that poops half their body weight in your apartment. Just don’t expect your security deposit back.

Yes, they look like a chipmunk wearing a wingsuit, and that is exactly as cute as it sounds.

But sugar gliders also poop everywhere, stay awake all night, and jump on everything… like your nephew. But at least you get to give him back.

Sugar gliders follow a really specific diet called the Bourbon’s Modified Leadbeater diet. We know that sounds delicious, but if you’re the type who can barely manage to make mac ‘n’ cheese from a box, a sugar glider probably isn’t the pet for you.

If you really want a pet that needs to be fed hard-boiled eggs, veggies, and supplements every morning, then start hanging out outside your neighborhood CrossFit gym and land yourself a vegetarian.

Seriously Why Would You Ever Want This: Pet Scorpion

Also, scorpions are venomous. And while scorpion stings don’t live up to their deadly reputation, they can still cause convulsions and breathing issues. (And, Blakin points out, it’s a huge liability if it stings a child or a small pet.)

If you really need to prove how badass you are by adopting a poisonous pet with giant pincers that scares the crap out of all your houseguests, you might want to do a little self-exploration. Maybe take up journaling?

When your landlord tries to rebrand a pest as a pet, you know something is off.

But these aren’t your ordinary New York City cockroaches. Madagascar hissing cockroaches can live up to five years and grow as large as three inches — and they’re social insects, so it’s recommended you adopt more than one of these giant mutant-looking bugs so they can have meetups and talk about you behind your back.

You should probably invest in a pair of noise-cancelling headphones to drown out the gross hissing sound their breathing tubes make. The hissing cockroaches also shed their skin six times before they’re full size, so we hope you’re looking forward to a terrarium full of ghostly cockroach skins.

On the upside, they’re cheap and legal, which sets them apart from most of the exotic pets on this list. So there’s that.

We’ve also walked past the otter exhibit at the zoo and wondered if we could smuggle one home in our tote bag.

Unfortunately, otters have a lighting-fast metabolism and have been known to spraint — a cute word that literally just means “otter poop” — and then spread it around to mark their territory.

If that’s not enough to dissuade you, ask yourself: Do you have enough space for an enormous freshwater tank? If you don’t, then don’t get an otter. If you do, still don’t get an otter, because otters like to travel in large families — so unless you have the ability to adopt a lot of otters, you’re going to end up with a very sad and lonely otter. You monster.

Instead, sign up to go swimming with otters. It’s cheaper than owning your own pet otter and you get to help fund opportunities for kids in the Make-a-Wish and other similar programs to meet them too. And, you probably won’t get spraint on.

So, Should You Adopt an Exotic Pet?

Probably not — unless you’ve got tons of spare time and money on your hands, or you recently inherited the deed to an abandoned zoo.

If you want to do something unique, maybe take up a weird hobby like soapmaking. Or brew your own kombucha. (Does a SCOBY count as an exotic pet?)

But when it comes to pets, this is the one time it’s good to be basic. Do yourself a favor and consider a kitten — small, fluffy, and only a tiny bit evil. 10/10 would recommend.

Latest posts by Kate Villa (see all)
As an Amazon Associate we earn from qualifying purchases. This post may contain affiliate links from Amazon and other sites that we collect a share of sales from.
106 shares