In a move that would have probably made National Treasure’s Ben Gates proud, a group of crypto investors nearly bought one of the last remaining copies of the Constitution that was up for auction at Sotheby’s.

We thought the same thing. It’s not like the Declaration of Independence. There were 500 printed copies of the U.S. Constitution and 13 are said to remain. The rest have been lost to time, bad organization, and probably someone’s dog.

Wait, Someone Bought the U.S. Constitution?

Yes. In less than a week, a group known as ConstitutionDAO had raised $47 million for their PEOPLE token with the intention of purchasing the Constitution. Most of it within 72 hours. Unfortunately, with taxes and auction fees, it appears the overall cost just outpaced how much they had crowdfunded and someone else snapped it up for $43 million.

The drama was even more intense for those turning in to watch the live auction on YouTube since almost no one knew whether they should rooting for Brooke or David. The confusion was all summed up succinctly by one person who exclaimed, “Should we be rooting for the woman or the bald guy?” (In the end, it seems it was the bald guy.)

Would Individual Investors Have Owned A Fractional Part of the Constitution?

No. As the group explained on their site, “You are receiving a governance token, not fractionalized ownership. Governance includes the ability to advise on (for illustrative purposes) where the Constitution should be displayed, how it should be exhibited, and the mission and values of ConstitutionDAO.”

Which, admittedly, is 500% less cool than owning an actual part of the Constitution, but still an interesting idea nonetheless.

The funds are now in the process of being returned to those who donated, minus gas fees. 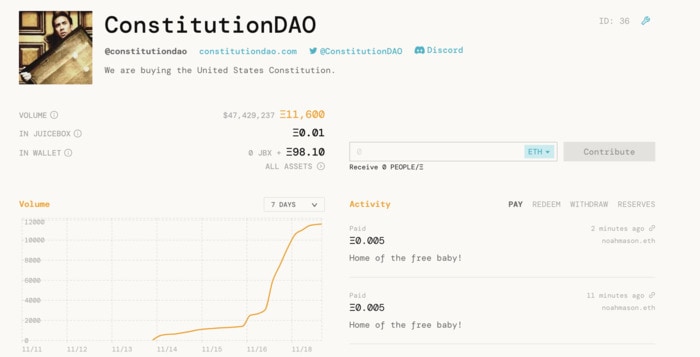 Even though they lost, it feels like a watershed moment for crypto. The fact that they could galvanize interest and raise so much so quickly leads us to ask what else could the community do.

Because, sure, it’s cool to buy the Constitution (even if you’d only get voting rights on how it’s displayed, etc.), but what about projects surrounding world hunger, climate change, and creating a real life Jurassic Park? If billionaires aren’t going to do much except launch themselves into the sun — er, space – maybe the crypto community can make a difference instead. Something to ponder.

In the meantime, here’s how to invest in crypto if you haven’t yet.

(Oh, and before you try and fight us, there’s 26 copies of the Declaration of Independence.)