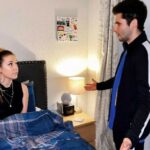 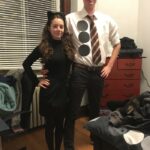 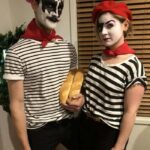 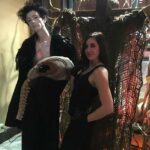 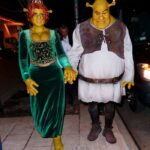 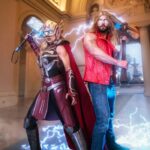 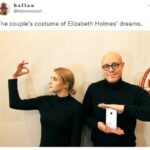 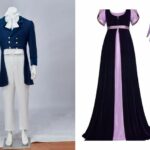 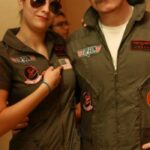 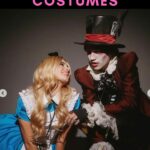 It can be exhausting to come up with a unique Halloween idea year after year. So when it seems like too much work for one person, bring in a partner! To sweeten the deal, we even did part of the task for you by creating this list of the best couples Halloween costumes for 2022.

Although we won’t say no to a king size candy bar as a thank you.

Now, a couples costume can go in many directions. You can go as a crime fighting power couple (despite the fight you had in the car on the way over about parking.) Or, you can flex your pop culture knowledge and dress up as something cinematic, like Top Gun cadets (despite your fear of flying and aviator sunglasses). 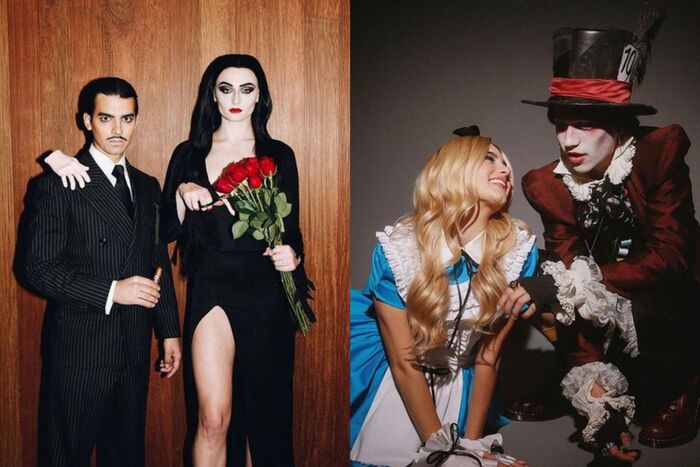 Whether you’re dressing up with a partner or a friend, we compiled a list of the best looks so you don’t have to. Now you have more time for you to focus on all your other to-do lists that you will definitely complete.

Who wouldn’t want to dress as two blonde bombshells in capes?

Halloween costumes are like onions: delicious, and require a lot of perfume to cover the smell of being stuffed into the back of a closet for 11 months out of the year.

3. Dream and Death from Sandman

A costume fit for a pair of hot goths. If you’ve been waiting for the series as long as we have, you probably already have Morpheus’ helm, pouch, and ruby ready to go.

Just bust out that striped shirt you’ve been afraid of wearing for fear of looking like a mime. Then, ask your four-year-old nephew to paint your face.

5. Jim and Pam from The Office

To really dive into a Dunder Mifflin character, get a job at your local paper supply company. Hurry, before they digitize everything!

“They’re here, they’re there, they’re every f–king where!” That is, as long as one of you is down to grimace the whole night.

Choose your players: Maverick and Goose, or Maverick and Rooster. Either way, someone should start growing out a mustache ASAP. And the other should…join Scientology?

8. Anthony and Kate from Bridgerton

Make sure to avoid all contact with one another except for lingering stares and walking past one another, letting your pinkies graze. *shudders in delight*

To create the Theranos founder’s iconic look, you can go as your normal, disheveled Monday morning self with some bright red lipstick. As for her male counterpart, Businessman Balwani is an easy outfit to recreate with a pairing of green juice. 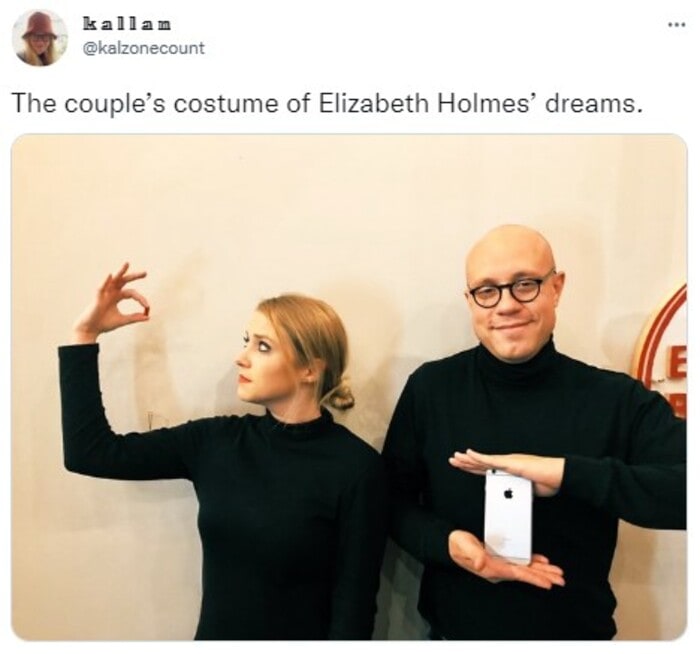 10. Taylor Swift and Her Private Jet

This is a much better costume than dressing up as yourself and recycling.

11. Chrissy and Eddie from Stranger Things

This year’s hottest costume is going to be the hottest couple that never was. No spoilers, but let’s just say Chrissy never woke up and Eddie did not like it. Oh, was that a spoiler?

Here’s our detailed guide on how to dress up as each. For a quicker version, dig out your old cheerleader uniform and grab yourself a Hellfire Club t-shirt.

Just because you’re not dating Ryan Gosling doesn’t mean you can’t pretend! Channel the upcoming Barbie movie with a bright pink or neon rollerblading outfit. Your costumes might not be plastic, but we’re sure you’ll look fantastic. Especially when running from Eva Mendes.

13. Morticia and Gomez from the Addams Family

Morticia and Gomez are quite possibly the healthiest couple costume on this list. Nothing says sexy like communication and endless devotion.

14. Baby and Johnny from Dirty Dancing

Nobody puts this costume in a corner. Unless you’re waiting to cross the street. That typically happens at corners.

15. Ash and Pikachu from Pokemon

For a classic couples costume, go as a trainer and the animal they captured and keeps in a ball. Don’t think about it too hard.

We don’t condone this marriage, but we know we look good in stripes and decay.

17. Cosmo and Wanda from Fairly OddParents

Did you decide to dye your hair pink this year and has your blonde boyfriend been swimming in too many pools? No? Just us?

Invisible boat mobile not included. Or is it?

This is perfect for any couple made up of two contrasting individuals: one who can’t stay away from bright colors and big glasses, and one who is grumpy with piercing blue eyes we could stare into for hours.

Okay, maybe you should bring some baked goods to the party for added effect.

A post shared by The Great British Bake Off (@britishbakeoff)

20. Wayne and Garth from Wayne’s World

We’re not worthy of how good you will look dressed up as the two greatest best friends in history.

21. Yzma and Kronk from The Emperor’s New Groove

Who wouldn’t want to spend their night yelling, “What?! A llama! He’s supposed to be dead!” Watch out for levers.

Bonus points if you can find someone who will let you sit on their shoulders as you and your BFF don this timeless couples costume.

This punny costume is a lot easier to understand than when we tried to dress up as Alexander Graham Bell. Although, both ideas can involve bringing along a tasty snack for the night!

You’ll be feeling peachy keen in this look. All you need is a pink dress, red hat, red socks, and maybe a baseball or bat. Oh, plus at least one friend. One that everyone can see this time.

25. Alice and the Mad Hatter from Alice in Wonderland

Find yourself a blue dress and white apron for an easy DIY costume. Now, which Mad Hatter you are is up to you, but our hearts go out to the 2010 edition. Mainly because we’re still trying to use up that pale foundation we got after a very long winter.

What is the purpose of having children if you can’t utilize them for a punny costume? Now, technically, this look involves a trio. But we hear that kids are kind of attached to a parent’s hip, so we’ll call it even.

Be smart about what kind of cookie you choose this monster to be paired with. People have some strong feelings about raisins in desserts.

This is one for the gorls. And their balding boyfriends.

29. Kermit and Miss Piggy from the Muppets

It’s not easy being green, but someone has to do it! And that someone is whoever has the most green clothes in their wardrobe.

Doctor Strange looked at all the possibilities and decided that this was the best one.

Latest posts by Katie Schindelheim (see all)
As an Amazon Associate we earn from qualifying purchases. This post may contain affiliate links from Amazon and other sites that we collect a share of sales from.
179 shares