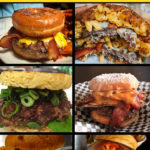 Imagine the perfect burger: two thick buns, a hunk of perfectly-seasoned glistening beef, melted cheese dripping down the sides, all smothered with special sauce. Maybe add a few pickles on the side. (Look, ma, we’re eating our veggies!)

Now, take that idea up a few thousand notches. Because, that’s what the inventors of these 10 crazy burgers did. They knew, no one should ever have to settle for a sad patty between two lettuce leaves — we’re looking at you, unnamed fancy pants restaurant in Hollywood. Not in ‘Merica!

So throw your low carb ideas out the window, pack a suitcase, and plan your road-trip-slash-burger-pilgrimage now.

Because here are ten of the craziest, most over-the-top burgers that put that Costanza burger to shame. Shame.

Yeah sure the Slab burger at Nosh Kitchen features mozzarella, marinara sauce, pesto, and two buns made out of pizza, but the Nosh Mac ‘N Stack is one of the craziest bacon cheeseburgers in existence.

It starts with the signature Nosh patty (or up to four of them) — a blend of ground chuck, brisket, pork shoulder, bacon, and spices — then they throw on American cheese, smoked BBQ sauce, and smoked bacon and shove it all between two deep fried mac n’ cheese bun patties.

We know what you’re thinking. Marinara and pesto?! What is the world coming to?

The Ramen Shack no longer exists, but it lives on in similar incarnations, like Tatusu Ramen’s poshed-up version that tops a medium rare Wagyu beef patty with green onions and a soft-boiled egg. Neither beats our overcooked 25-cent Maruchan ramen sprinkled with a salty mushroom flavor packet, but it’s cute that they tried.

The happiest place on earth (that’s Disneyland, not the Sahara tent at Coachella) has just debuted the Ramen’s burger’s new nemesis: the Spaghetti Burger. It features two buns made from fried spaghetti nestle a beef patty topped with mozzarella cheese, arugula, and a sun-dried tomato spread. If you think it sounds like something you’d make after four hours in the Sahara tent, you’d be right.

Los Angeles isn’t all about kale smoothies, grain bowls, and kombucha. After all, it was Southern California that gave us In-N-Out, Carl’s Jr., and McDonald’s. And it keeps the gift going with the Dee Snider burger at the heavy metal-themed burger joint Grill ’Em All. Named for Twisted Sister’s lead singer, this outrageous sweet and savory burger is topped with peanut butter, strawberry jam, bacon, sriracha, and the most batshit dreams ever.

Your hangover doesn’t stand a chance against this 100% Angus burger topped with fried egg, bacon, Swiss cheese, cheddar cheese, sliced potatoes, pickles, ketchup, and mayo — although you might need to unhinge your jaw to actually take a bite. If we weren’t a family-friendly site, this is where we’d make a joke about snakes.

You can keep your cute little donut holes. We’ll be over here in Florida feasting on a beef patty with American cheese and bacon, sandwiched between two glazed donuts.

Can a turducken sandwich be considered a burger? Yes, because we make the rules around here. Ground turkey is topped with chicken, truffled duck mousse, homemade stuffing, Southern-style gravy, homemade cranberry sauce, and sweet potato ribbons. It sounds like a weird blend, but let’s be real, no less weird than your uncle. Which is why we recommend doing Friendsgivings from now on.

A post shared by A Day Without Love (@adaywithoutlove)

Dirty Harry was one crazy mofo, but he wasn’t even this nuts. This beef patty is topped with peanut butter, fried egg, bacon, hash browns, and cheddar cheese, served on a glazed donut that’s been sprinkled with powdered sugar. It sounds like a carnival ride of gastrointestinal issues, but we’re feeling pretty lucky.

“Some of everything — it’s absolutely disgusting.” That’s the menu description for this burger, and they’re not kidding — it’s topped with corned beef, liverwurst, wasabi, banana peppers, guacamole, remoulade, vanilla ice cream, hot fudge, and a cherry on top. There’s actually more, but we had to stop typing so we could dry-heave.

Latest posts by Chelsea Frank (see all)
As an Amazon Associate we earn from qualifying purchases. This post may contain affiliate links from Amazon and other sites that we collect a share of sales from.
289 shares