Apparently, our world is quickly becoming Jetson-ized thanks to Internet mastermind Larry Page, with an assist from Elon Musk. What’s that Astro? You haven’t heard about these flying cars? Well, our story begins at Kitty Hawk. No, not that one. 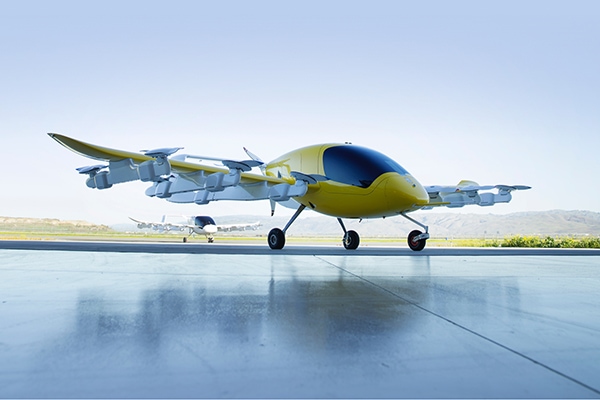 What Is Kitty Hawk?

While Elon “Mr. Useless Submarine” Musk shoots cars into space (and rockets too, but whatever), the Google co-founder has chosen to invest in Kitty Hawk, a flying car company based in Mountain View — stop us if you’ve heard this one before —and led by Sebastian Thrun, the founder of Google X. It was dubbed, humbly, after the beach in North Carolina where the Wright Brothers first took flight in 1903.

Kitty Hawk has announced two prototype machines that get you from point A to point B without having to use the oh-so-pedestrian ground.

The Flyer is an all-electric “personal flying vehicle” (we prefer to call it a “flying car” so we can still make zoom zoom noises when we talk about it) with a top speed of 20 mph that’s meant to be used “over water and uncongested areas.” This doesn’t seem like a terrible idea in the making! And Chad from the gym is literally counting down the days until he can zoom zoom this puppy all over Lake Havasu. Hey Chad, maybe count silently? Thanks, bro!

The Cora is a two-seater zero-emissions flying taxi with a supposed top speed of 90 miles per hour. It will combine “self-flying software with expert human supervision, so you can enjoy the ride.” If you do your how far can I travel before landing in the ocean math properly, that is. Its website asks important questions like: What if flying across town was as easy as hopping in a rideshare? What if Cora could fly for you? Well, it depends. Are there mints? Is there water? Also, how exactly does this “self-flying” thing work? Where are these answers, Kitty Hawk?

No launch dates have been announced for Kitty Hawk’s Flyer or Cora, but even though there are multiple companies — alongside Kitty Hawk, there’s Joby Aviation, Ehang, Volocopter, and Opener (Page is investing in this one…despite the fact that it looks like a giant bug), and more — all competing to be the first to market, flying air taxis aren’t going the only unique way to get from point A to point B. Even if Opener’s Black Fly will reportedly cost the same of an SUV and no pilot’s license will be required to fly one.

Page has invested in not just one, but three different kinds of flying vehicles, so I vote we come up with our own utopian, cartoon-worthy, alternative forms of transportation. If he can make flying cars, then the rest of us get to where we’re going however we want.

With Uber’s corporate drama and Lyft’s role as a price-comparison tool, I need a chauffer I can trust.  And, as an adult woman, I’d like to throw the “cool” rule book out the window (of which I’ve never been great at following anyway) and be driven place to place by a mom in a minivan.

Those of us struggling to accept adulthood can hire moms to pick us up and drive us from our house to a first date, the bar, or our co-ed soccer game. The ride is always complete with orange slices, apple juice, teeny Ritz cracker sandwiches, and unsolicited advice on everything.

Zebras are a great way to weave through traffic. Who needs to shell out dough for a Lambo when you can get the reject of the horse family that runs on grass?

Is it black with white stripes or white with black stripes? No one cares! You get to cross against the light either way!

Not sure what to talk about on a ride to dinner with a date? Literally all you have to say is “oh, did you see that we’re riding on an actual zebra? Anyway, what were you saying about your dad being annoying?”

If Segways were too cool for you and you don’t want to get caught up in the Bird vs. Lime drama, then may we suggest the Orbit Wheel skates? You simply put your foot in each and get moving. You know, it’s like walking. But on a unicycle. And not like walking at all.

If the previous three alternative transportation modes aren’t available, I’ll take the next best thing: My cousins (aged 9,13, and10) can carry me. But only if they’re stacked haphazardly inside a trench coat. Bonus points if they’re wearing a wig and a tiny mustache.

If they want me to take them to see an R-rated movie, I gotta get something out of it. Also, they’re paying because if you think I’m spending my hard-earned cash to see “Scary Movie 8: Saw No Evil,” you got another thing coming to you.

Latest posts by Kate Villa (see all)
As an Amazon Associate we earn from qualifying purchases. This post may contain affiliate links from Amazon and other sites that we collect a share of sales from.
121 shares