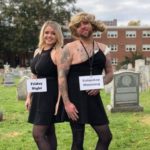 Funny couples costumes are the only legit reason to be in a romantic relationship as far as we’re concerned. Sure, splitting rent is why the couples we know stay together, but if it weren’t for the prospect of being the best-dressed twosome at Halloween, we might have stuck with singledom.

We’ve saved you the endless Googling and trips to Party City and found the best funny couples costumes for you and your sweetie. Whether you’re the type of couple that wins cosplay contests or are last-minute planning your Halloween costume the morning of October 31, there’s something for everyone among these.

1. You rang? The best part about this Wednesday Addams and Lurch combo is having an excuse to show off your knife skills. And your tall boyfriend.

2. Bob Ross was doing ASMR way before YouTubes of people chewing gum was a thing. Bonus points for squirrels attached to your happy little tree costume.

3. This Misery get-up is a fun way to take advantage of your boyfriend’s injury and your grandmother’s underutilized wheelchair. (What, like she’s going to leave the house this year?)

4. We love puns, schoolyard games, and breakfast foods. Anyway, we think this is supposed to be potatoes playing Simon Says. To recreate it, check out this DIY guide.

. This costume is a metaphor for our relationship.

6. But we can dream! You could likely re-create the classic fitness stars Richard Simmons and Jane Fonda pretty easily, or you can buy Richard< and Jane costumes.

7. Not part of a couple, but still want to get on our list? Grow a beard, then cut half of it off. Now do the same with your chest hair.

8. Wait, we’ve got something for this. Go as animation’s most on-again-off-again couple, Sterling Archer and Lana Kane.

9. This family is killing it harder than the Kellys. (They were late-19th century serial killers. Look it up!)

11. Poor Billy. No one thinks he’s funny and he has to drag his girlfriend around all night.

13. If we had a time machine, we’d travel back to 2016 — when Narcos was popular, cocaine was legal, and the World Series hadn’t finished yet. Gambling on events from the past is easy money!

14. A tribute to our favorite Christmas movie and second-favorite Daniel Stern vehicle.

15. Ross and Rachel from that classic Friends episode, “The One with the Juicebox”

16. We’re not worthy! Seriously, we are so incredibly blessed and undeserving of this charmed life.

17. The only way it’s appropriate to call your S.O. an idiot sandwich.

my sister & her bf gmfu pic.twitter.com/fZnNeeIthT

18. Got jaundice? With the right outfit, you can still party like a default emoji.

19. Like a moth to a flame, burned by desire… well, at least this fly and lamp couple costume was fun while it lasted.

20. Big, bold signs preempt silly questions like “What are you supposed to be?” and “Where’s the exit?”

21. Another great use for balloons — traveling to the upper atmosphere.

22. Are you dating your twin? Dress up as these Legends of the Hidden Temple characters. Choose your team and get your own shirt here.

25.The Sandlot did for lifeguards what Baywatch did for… other lifeguards.

26. We attempted something like this with TikTok, only to be banned in the US.

28. Flashback to 2001 and the last time denim was allowed at the American Music Awards!

29. Much as we love the phrase “bun in the oven,” this has us considering “a small moon in our uterus.”

30. The rapper who performed this pun was recently arrested for an alleged hatchet attack. Happy Halloween!

31. This is why we can’t watch Modern Family. That and we haven’t had a DVD player since the tornado.

33. Cozy or sexy? The choice is yours in this Batman Returns couples costume starring the Penguin and Catwoman.

34. The Plague Doctor we want to see is out-of-network, so we’re gonna wait out this hacking cough and body chills thing a bit longer.

35. Admittedly, we also post filtered photos to IG. (Our cupcakes are really muffins.)

36. Finding an adult’s Girl Scouts uniform is not as difficult as not eating all the Thin Mints before the cookies return.

37. We see your Girl with the Pearl Earring and raise you on Mona Lisa. Mostly because we’re out of actual chips.

38. We love Halloween costumes that you can create with what’s already in your closet. Or that you can painstakingly put together with many separate eBay and Etsy purchases.

39. The ending to 101 Dalmatians we always longed for — a happy Cruella! (She’s just pledged to give up smoking.) 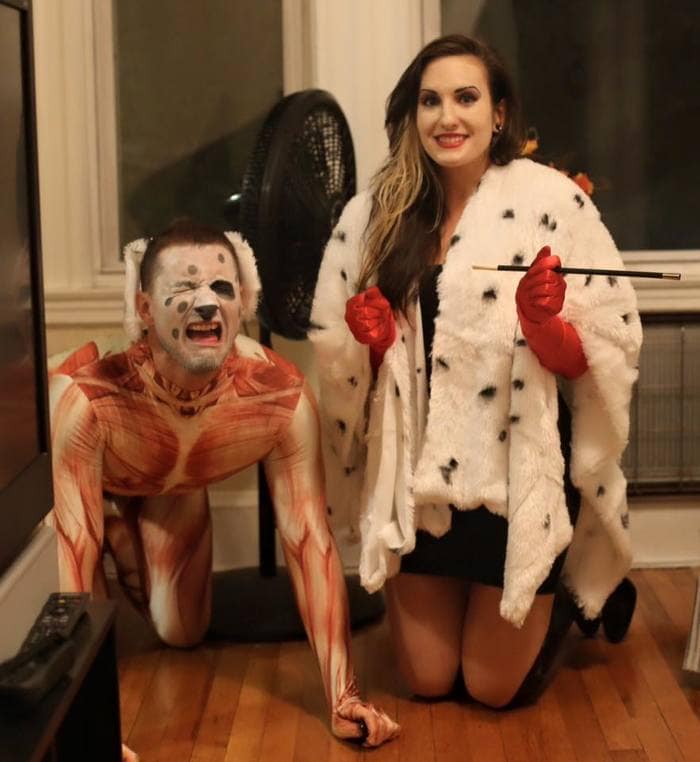 42. Our TLC theme party invitations clearly stated “No Scrubs,” but who are we to call out healthcare workers?

43. This before-and-after couple is killing it. We’re dying. Someone please bury us before we type another pun.

44. Now that we see them together, it’s clear the icon designers had P and V on their brains when they came up with these. Power and voltage, that is! 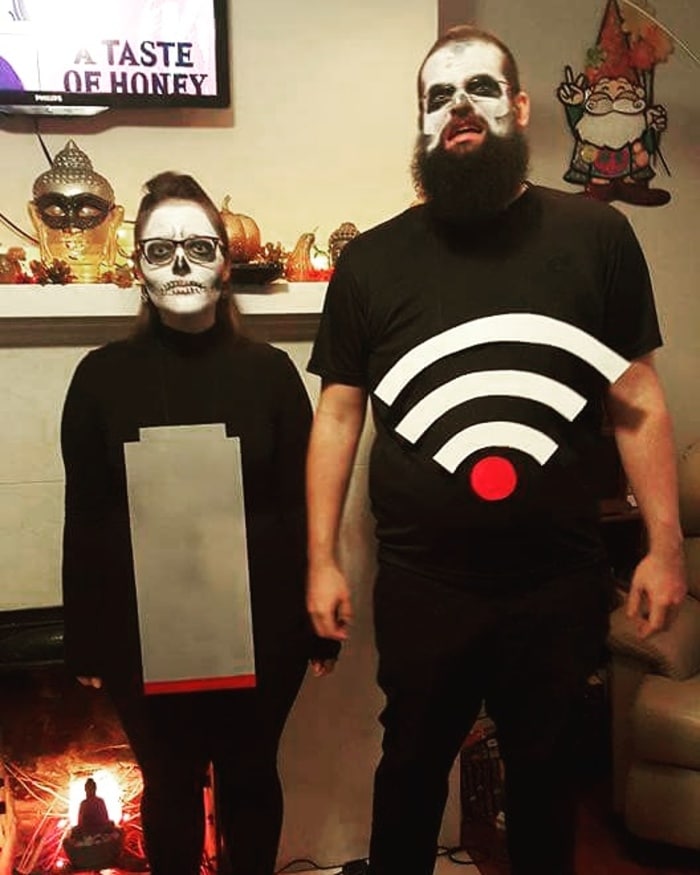 45. Mining The Simpsons archive for costume ideas is like shooting fish in a barrel — pretty likely to end up with you in court. 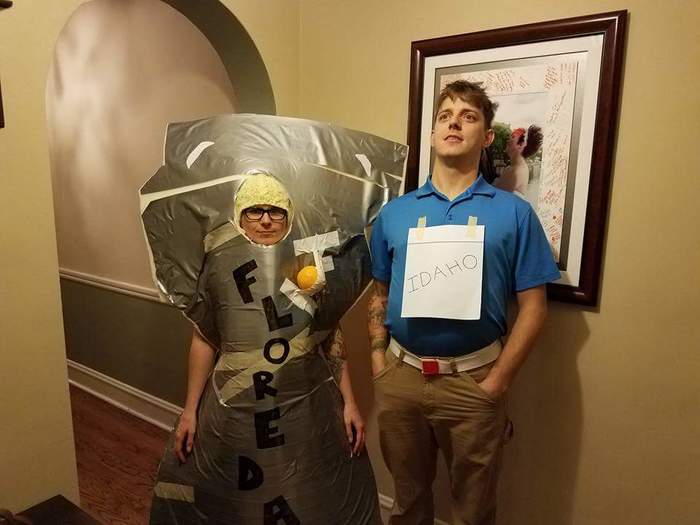 47. This couples costume is relatively easy to pull off — unless your partner refuses to let go when you try to yank it off them.

48. Matilda’s chocolate cake scene inspired us to name our child Bruce (if it’s a boy) or Bogtrotter (if it’s a girl). If we have twins, we’ll run a contest for the second kid —the winner can name and keep the thing!

49. We know we’re not alone in feeling that Tiger King is easily the worst thing to have happened in 2020.

50. Feeling fiesty? Go as Great British Bake Off‘s Mary Berry and Paul Hollywood and you get to banter / spar with your partner all night long!

51. Your boyfriend talking to a woman dressed up as a movie prop is a clear sign he’s lonely.

52. Chicken-n-waffles is a fine breakfast combo and easier as dress-up than our usual, last night’s pizza-n-Diet Coke.

53. This Edward Scissorhands costume would be simple to pull together if you and your partner are a Hollywood wardrobe stylist and topiary professional (or vice versa).

54. This X-Files costume is highly unlikely but not outside the realm of extreme possibility. Whatever that means. 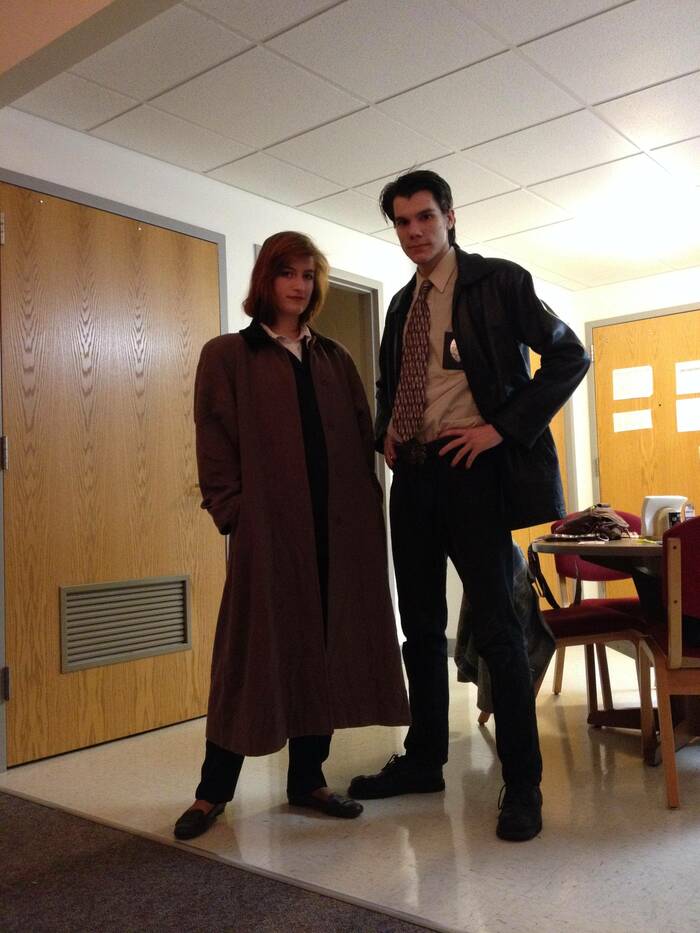 55. This Monarch Butterfly and catcher combo is very much like how our parents met — at a Halloween costume party.

57. Oh my god, Karen. You can’t just ask people what their costumes are.

58. La Croix tastes like tropical cardboard, but these costumes are awesome.

59. But it could always be a White Claw, so there’s that.

60. The best Marvel couple this side of us and Thanos. What can we say, we have good taste.

61. From “The One Where Friends Jumped the Shark” 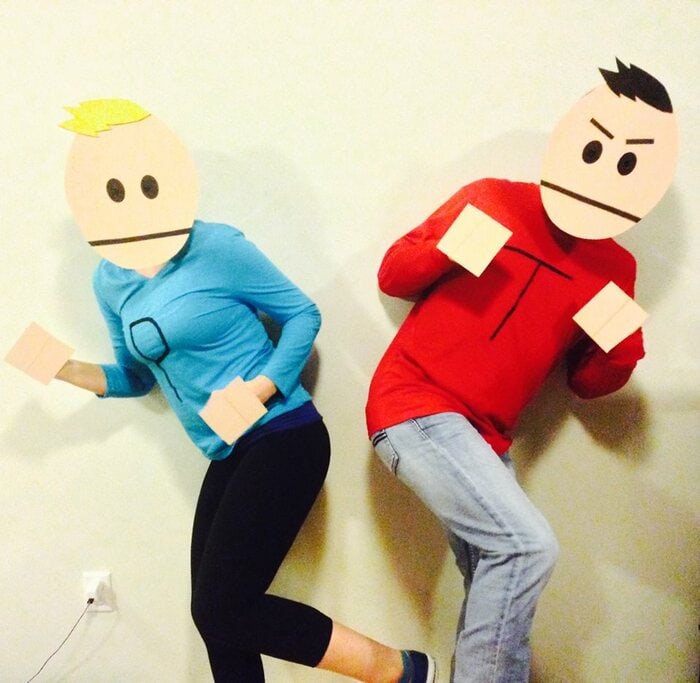 63. The Vampire Diaries kind of went off the rails in Season 8 when Tarantino took over.

64. We always lose at this game, probably owing to our inability to read.

65. Rest assured, Cinderella’s stepsisters did have their own happily ever afters. (C left them money in her will — she died at 16, just a year after her wedding.)

66. Though group costumes should be a genre unto themselves, we’re OK with this Schitt’s Creek costume, provided you’re in a poly or partner-swapping situation.

67. Dress up as Blathers and Celeste and give Animal Crossing the love it deserves after single-handedly salvaging the year.

Latest posts by Ashley Hubbard (see all)
As an Amazon Associate we earn from qualifying purchases. This post may contain affiliate links from Amazon and other sites that we collect a share of sales from.
5.2K shares