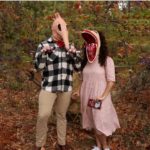 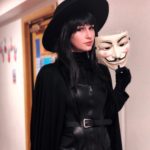 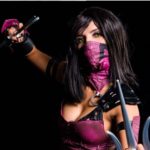 We’ve passed the halfway point of 2020, which means it’s almost time for pumpkin spice lattes, cardigans, and of course: Halloween. Since it doesn’t look like Miss Rona is packing her bags and leaving anytime soon, we’ve rounded up the best Halloween costumes with masks.

And by that, we mean the mask is a crucial part of the costume, so you’re not just cosplaying as “a witch in an N95 mask.”

Because while you might not be chatting it up with some hottie at a giant house party this year, that doesn’t mean you can’t still celebrate Halloween. You still get to eat all the candy! And bob for apples! And, at worst, you can dress up and walk around your neighborhood frightening anyone who’s outside. That’s fun, right?

This is for all you 90s babies, who played Mortal Kombat on Sega Genesis and always picked Mileena as your favorite character because a) women characters were slim pickings and b) those teeth! This fierce Halloween costume is bound to kick butt on multiple levels as Mandy Calabria demonstrates. While you’re at it, can you use the Face Feast fatality to “finish” this pandemic? Get it on HalloweenCostumes.

Back in the day, Plague Doctors treated victims of outbreaks while dressed in long robes and beaked masks, which was… an interesting choice. Anyway, a pandemic seems like the perfect time to revive that 14th-century physician look. While this slim-fitting hooded ensemble looks a little bit like World of Warcraft, think of it as a throwback (like, seven centuries back) sexy nurse outfit or be like Doctor DellaPeste and make it your own. Get a mask on Etsy and the classic robe on Amazon.

Just picture Spiderman, but evil! As cosplayer Parichu Uchiha‘s epic costume shows, this Marvel character’s black and white bodysuit is the perfect outfit to wear during a pandemic because you’re legit covered from head to toe. You’re protected and wearing a killer costume! Unfortunately, Tom Hardy is not included. Uchiha had the costume custom created for her by Heroestime, but you can get a similar version on Etsy.

If you’re looking for a series to binge, HBO’s Watchmen is a must. Sister Night is not only intelligent, curious, and tough, her costume is 100% pandemic approved! She sports a low-cut bodysuit, topped with a trench coat, and a mask. You may even draw the eyes of a hot Dr. Manhattan (from six feet away, of course) at your Halloween party. Available on Etsy.

Deadpool is one of the most hilarious and recognizable Marvel characters and owns his black and red bodysuit, complete with tactical weaponry and a full-face mask. His counterpart, Lady Deadpool, wields the same irreverent attitude. Simply throw your own face mask on underneath the suit, and you’ll be all set for All Hallows Eve. While the costume won’t make you the funniest person on Twitter, at least you can be the life of the party when you ask “Whose kitty litter did I just sh*t in?” Get it on HalloweenCostumes.

For those wanting to start a revolution, V for Vendetta’s freedom fighter is the ideal look to wear this October. The Guy Fawkes mask is instantly recognizable for those who are fans of the graphic novel and 2005 Natalie Portman film. Izzy tells us she got the majority of the costume from Spirit, which should be popping up in the shell of a Pier One anytime now. If you can’t make it there, you can get a similar version here on Amazon.

Does anyone actually know what the members of this iconic musical duo look like behind these futuristic space suits? If you wear this costume, not only do you not have to wear any makeup, but you also might be able to fool people into believing you’re in the group. Maybe they’ll put you in charge of the Halloween party playlist. Who wants to hear some Bon Iver? …no? Get it on Amazon.

Since it already feels like we’re living in the upside-down, this inter-dimensional monster costume from Stranger Things fits the theme of 2020. From the lab in Hawkins, Indiana, to your Halloween party, take your night to Eleven! Get it on Amazon.

Orville Peck is a Canadian country singer, best known for his fringed Lone Ranger face mask. Did he know something before we did? This is the perfect DIY costume — all you need are tight Wrangler jeans, a western button-down shirt, a cowboy hat and boots. Then, complete your costume with a trademark fringe mask. Giddy up! Mask available on Etsy.

If you’re in the market for a couple’s costume, Adam and Barbara Maitland from Beetlejuice is an instant hit as you can see in Violet Vixen’s cosplay below. The Barbara mask is fun, ridiculous, and most important will scare off anyone named Otto. Yes, even Otto Von Bismark! Get it on Amazon.

When the Philadelphia Flyers unveiled Gritty in 2018, he quickly became one of the most beloved sports mascots of modern times. Bring joy to those around you with this fun, lovable orange monster that looks like the result of a weird one night stand between Chewbacca and Animal from the Muppets! Get it on Amazon.

Brittny Pierre
Brittny Pierre is a pop culture and music journalist who resides in Chicago, IL via NYC. Brittny has had work published in Bustle, Zora, Shondaland, and runs the pop culture blog, Pierre Into My Life. You can find her live-tweeting about the Real Housewives at @sleep2dream or discussing your problematic favs with her podcast, Problematical.

Latest posts by Brittny Pierre (see all)
As an Amazon Associate we earn from qualifying purchases. This post may contain affiliate links from Amazon and other sites that we collect a share of sales from.
765 shares