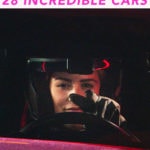 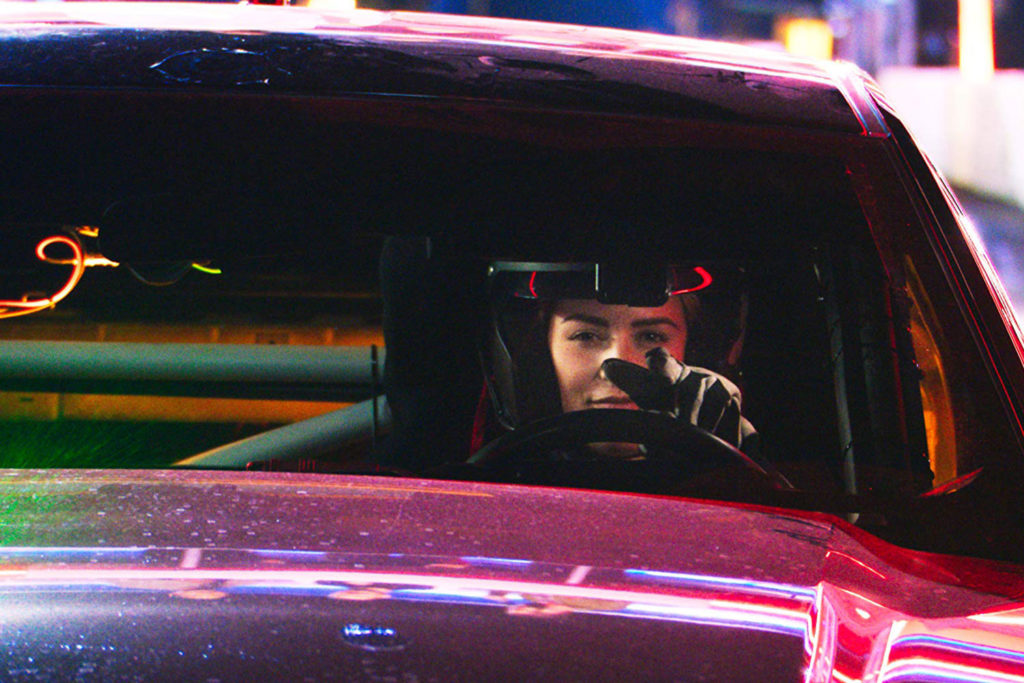 On each episode, drivers go head-to-head to see who can maneuver their custom, tricked-out cars the fastest through challenging obstacles that test their abilities in precision, control, balance… and patience dodging tourists on Bird scooters. Oh, wait, that’s just us driving in Santa Monica.

And, while there’s no rose ceremony in this “non-scripted” reality television show set in Rochester, New York, there is a wildcard competition allowing some previously failed racers the chance to advance to the final.

Here are some of the craziest moments from Hyperdrive’s first season that have us saying, hey maybe our commute home isn’t all that bad.

The Cast and Cars of Hyperdrive

Spinner and law school student Stacey-Lee “Queen of Smoke” May drives a 1986 BMW E30 3 Series. When you drive as fast as she does, it pays to know how to talk your way out of speeding tickets. Law school isn’t such a waste after all!
Hometown: Johannesburg, South Africa

Truck driver Sara Haro knew she had to ditch the heavy big rig if she wanted to compete on Hyperdrive. She chose a 2014 Ford Mustang outfitted with a 3.7 V6 Cyclone engine. There, there Mr. Truck. You’ve got a few years before she sends you to the scrapyard.
Hometown: Östergötland, Sweden and Florida

“Baby-Faced Assassin” and drift school founder Diego Higa drives a 2006 Ford Mustang GT. Little known untrue fact: Not only is he an assassin of other driver’s course times, he’s also known to demolish an entire large pizza on his own.
Hometown: São Paulo, Brazil

Rally instructor and professional drifter Fielding Shredder, drives a 1997 Nissan 240SX with a trash can in his car to help him handle water obstacles. Are we the last to find out that Oscar the Grouch is the new BB-8?
Hometown: Austin, Texas

Former J-Pop singer turned drifter Kisa Awano is a D1 Lights and D1GP Pro2 driver eager to get Formula D racing here in the States. She drives a splatter-painted 2000 Toyota JXZ100 Cresta. She definitely has the best road trip playlist out there. You know…for those 100 mph, two-minute road trips.
Hometown: Osaka, Japan

Professional drifter and Queen of Europe champion Karolina Pilarczyk takes on the other Hyperdrive racers with her hot pink 1999 Nissan S14 and it’s LSX 6.2 V8 Supercharger engine. But only on Wednesdays.
Hometown: Warsaw, Poland

When Alexandre Claudin isn’t speeding around the Hyperdrive track in his 1968 Dodge Charger, he’s shushing down mountains on his mountain bike. That’s the noise they make right? They never let us out from behind our desk.
Hometown: French Alps

Veterinary assistant turned YouTuber/drifter Brittany Williams drives a 2008 Nissan 350z. With video titles like “DON’T DIE” we know where we’re taking our dog when she inevitably gets into the Halloween candy. Puppy Chow. It’s really really not for dogs.
Hometown: Lewisville, Texas

Corinna “Driftbeast“ Gräff, mom and badass co-owner of Graeff Motorsport and one of the fastest female drivers in Europe. She drives a 2012 Mercedes Benz E500. We’re counting down the hours until she picks us up from this terrible party.
Hometown: Trochtelfingen, Germany

Alex Gräff, husband to Corrina, and winner of two Guinness World Records: longest drift and fastest drift. We assume these have something to do with beer. He drives a 1986 BMW E28 5 Series.
Hometown: Germany

Veteran driver Atsushi Taniguchi, gets around the track in his 565 horsepower 2001 Toyota Crown 2JZ with no hydraulic handbrake. Look, ma, no brakes!
Hometown: Aichi, Japan

Mick “Wacky” Wilkes’ car has the weirdest history. The 1978 Bedford HA Viva Van used to be used as a chicken shed. So no, the feather’s spewing from the engine when he rips out aren’t just special effects! Unfortunately, neither is the smell.
Hometown: Birmingham, England

Like Taniguchi, rally driver Axel François also drives a car outfitted to resemble a police car. Is that because they know the other drivers will slow down if they see them in their rear view mirror? Sneaky guys. Very sneaky. (It’s a 1993 Nissan 200SX S13 if you need to know.)
Hometown: Manosque, France

Omar Salaymeh is the founder of the Ultimate Road Rally and dad to the cutest French Bulldog. Oh yeah and he drives a 2016 Mercedes AMG GTS on the show that seems to have a problem with the doors opening at the most inopportune times. We said close the doors, HAL. Close!
Hometown: Chicago, Illinois

Aspiring stunt car driver Aaron Parker scoots around the Hyperdrive track in his customized 1993 Mazda FD RX-7 with a rotary engine that used to be his commuting car in college. Is that why he hasn’t texted back?
Hometown: Quartz Hill, California 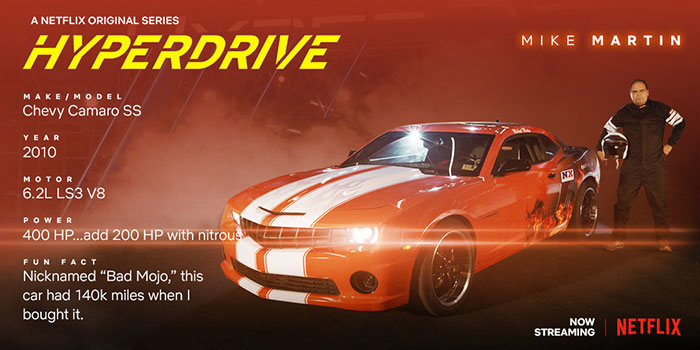 Formula Drift PRO1 driver João “Sheriff” Barion actually taught Diego Higa how to drift. They both took on the course, with Barion in a 1965 Ford Mustang. Wax on, wax off. And that’s how you make a car shiny!
Hometown: Brazil

Marine Corps Veteran Edward Michalak’s 1969 Chevy Camaro wasn’t what we’d call nimble, but it is what we’d call would-look-great-parked-in-our-driveway. If we had a driveway.
Hometown: Deltona, Florida

John Klarich, a longtime fan of the Fast and the Furious, drove a 2005 Ford Mustang GT onto the course. Unfortunately, on a drift course, it helps to have a car that can drift… so he only lasted so long.
Hometown: Chula Vista, California

Histotechnologist Sherry Kamiya, like Woodbury, brought on a 1991 Nissan 240SX S13. The official scientific diagnosis on why neither passed the qualifying round? They were both too slow.
Hometown: San Francisco, California

Nate Galvez’s 1990 Mazda MX-5 Miata’s the “Goblin” has more than 300,000 miles on it. Meanwhile, we’re trying to keep ours under 30,000 before we turn it back into the dealership. Hey Galvez, can we get a ride to work?
Hometown: Rancho Cucamonga, California

Blackhawk helicopter mechanic Marc Rios and his 2002 Chevy Camaro SS came to win, but quickly got smoked by the Rockford Turn in the Supernova and later stalled and refused to restart.
Hometown: Cocoa, Florida

1. Too Fast, Too Furious, Or Just Right?

In Hyperdrive’s episode 6, Fielding Shredder — who comes at every obstacle as fast as our dog when he sees bacon — slammed the back of his car into a brick wall going 80 miles an hour.

While this might seem to be a game over move for most, Shredder lived up to his TMNT Boss name and proved to be nearly unstoppable. Though he couldn’t continue that day, he returned in the wild card race in episode 8.

2. She Might Not Be Able to Walk On Water But She Did Power Miraculously Through It

In episode 7, German powerhouse Corrina Gräff was the first to face off against the water cannon obstacle and the last.

When the water cannon went off, it blasted straight at Gräff’s E500, pancaking her windshield. Gräff reported that she couldn’t see and had glass in her mouth. She drove off the course and was escorted to an ambulance. Not an IHOP, which is all we’re thinking about since we read the word pancake.

Will There Be a Hyperdrive Season 2?

Netflix hasn’t yet greenlight a second season of the show, but considering it recently debuted, there’s still time. 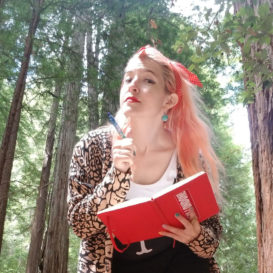 Jennifer Stavros
Jennifer Stavros is a freelance writer who found herself dazzled by city life... but hasn't been able to decide completely on which one she'd like to call her one and only. As a self-identified hipster art geek, she enjoys beer, travel, video games, nature, cannabis, art, roller skates, and occasional throwbacks in her token booty shorts to her hometown closest city she also escaped from while wearing black sunglasses and on a mission from... well she was raised Catholic even though she doesn't practice anymore.

Her adventures in the city have spanned a variety of topics from art, politics, cannabis, beer, and even a serial killer and her work has been featured on The Independent, October, LAist, The LA Weekly, and more.

Her stories infuse her musings and personal growth embarking in academic and artistic exploration while double-fisting cocktails and beers in cities and frequently blur the lines of an artistic, corporate, colorful and dark world. You can read more about them on her blog Little Girl, Big City, on her Twitter, Medium, or perhaps in one of the many books she's writing.

Latest posts by Jennifer Stavros (see all)
As an Amazon Associate we earn from qualifying purchases. This post may contain affiliate links from Amazon and other sites that we collect a share of sales from.
25 shares