If you haven’t had at least one hot dog today already, you’re doing it wrong. It’s summer, baby! In the meantime, grab a homemade patriotic popsicle, let the grill keep flaming on, and enjoy these Independence Day tweets created for the 4th of July! 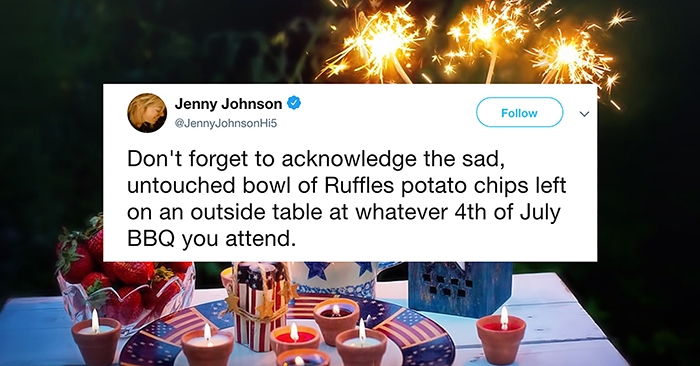 1. The best people to watch fireworks with.

2. We’re already dreading going back to the office.

"Hope you had a great 4th of July!" – someone about to ask you for something in an email.

You know the 4th of July is an American holiday because everyone says to "Stay safe" when celebrating.

Celebrating the 4th of July like every other parent: angrily cursing each firework that goes off after my kids are in bed.

7. The Internet is forever.

Happy 4th of July weekend!
Remember if you've been drinking and are going to be using fireworks – make sure someone is getting it on video.

8. Do you really think you can fly that thing? Well, yes.

Dad, why do we celebrate 4th of July?

Well son, it celebrates our defeating the aliens that blew up the White House after Will Smith attac

me every 4th of july pic.twitter.com/xeCSyTPe1q

Don't forget to acknowledge the sad, untouched bowl of Ruffles potato chips left on an outside table at whatever 4th of July BBQ you attend.

11. Just as the Founding Fathers intended.

this 4th of july, don’t forget to leave milk and hot-dogs under your flag so george washington will come and leave you a big mac in the morning ??????

he's scared of the fireworks so my mom put on some dog videos for him ❤️ pic.twitter.com/VTjYa6YIcK

15. The most patriotic of body types.

most people's 4th of july plans are really just what people do in texas everyday: eat bbq, drink beer and light shit on fire

The Purge, but for people who set off fireworks the 5th of July

So, on July 4th, one of the hottest days of the year, we're all going to sit outside of our air-conditioned homes and cook over a fire?

20. Well done! Is definitely not how we like our steak!

Congratulations to me on a successful first use of a barbecue! Nothing was set on fire…except the bbq. But I'm told that is essential.

If Toby Keith sees his shadow on the 4th of July, we get 6 more weeks of freedom

Spread patriotic spirit by telling the barista your name is "USA" and hiding. When they say your name, watch as Starbucks begins chanting

You can always count on me to bring my famous recipe of "bag of ice" to your summer cookout.

Are these firecrackers in my pants, or am I glad to see a paramedic?

Latest posts by Mac McCann (see all)
As an Amazon Associate we earn from qualifying purchases. This post may contain affiliate links from Amazon and other sites that we collect a share of sales from.
103 shares