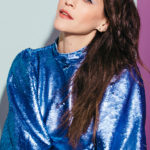 I met GLOW actress Jackie Tohn about five years ago when I saw her doing standup comedy about a pair of fancy boutique pants and thought, “Oh my god, I think I stalked her on my ex’s Instagram account once.”

She was absolutely captivating to watch on stage. She has this childlike energy when conveying her observations, but expresses herself with the mannerisms of a New York mobster meets your favorite Jewish deli regular. Bold, loud, in your face, and would probably slap the salami right out of your hands then write a musical comedy about it.

If you want to talk about perseverance, Jackie Tohn could write the damn book. She’s originally from Long Island, but been at this Hollywood game since she was just nine years old.

She came out to Los Angeles at eighteen to be an actor, and found her way to stand up simply by being the funniest girl in the room. All the time. “I was hyperactive, and they just needed somewhere to put me.”

After spending almost her entire life scraping by on just enough work, she landed the role of Gilda Radner in A Futile and Stupid Gesture. After Tohn says, “they’d literally seen everybody else in Hollywood.”

“Literally, everybody. I sat in the waiting room of the audition with some super hot girl who called her ‘Gilda Rosener.’” But, then, everything changed for her.

The protege of the casting director who gave her Gilda was casting a little wrestling show from none other than Jenji Kohan, the creator of Orange is the New Black. She landed the role of Melrose on GLOW a few short months later. The show is now in its third season, with a fourth and final season likely coming next year.

In anticipation of Marvelous Mrs. Maisel’s season three debut on December 6, here’s Tohn’s tips on how to get into comedy, dealing with rejection, and the importance of getting out of your own way.

Chelsea Frank: Did you always want to be a stand up comic?
Jackie Tohn: I always wanted to be a professional funny person, but the idea of being a standup scared me. I did stand up a bunch as a free-spirited / hyperactive teenager, then stopped in my twenties.

At that point in my life, for a number of reasons, I was making fear-based decisions. Fear of success, fear of failure — all that bullshit self-sabotage we do to ourselves.

And I was making excuses about why I no longer wanted to do standup. I’d say “it’s too depressing, that lifestyle is too hard, I don’t want to be on the road all the time, it’s all men…”

But that was all fear. But then in my thirties, I was able to get out of my own goddamn way and get back on stage.

What advice do you have for other women who want to become comedians?
I’d say, spend the time doing the work. Make stuff. Write jokes, go to mics, put stuff on Instagram. You just gotta put yourself out there.

This career takes so much perseverance, so be patient. And, honestly, you’re probably going to need to be a little bit insane in order to keep coming back for more in the face of almost constant rejection.

Do you know how crazy it is to hear ‘no’ all the time and still think ‘I should do this?’ It’s the definition of insanity. But it’s what you have to do.

I think Hollywood is just a bunch of beautiful, talented psychopaths. Did you deal with rejection a lot growing up as an actor?
So much. A truly unbelievable amount of “No, we want someone taller, shorter, funnier, less funny, older, younger, less edgy.” Funny, no one ever said more edgy.

How did you continue on? Who can handle that kind of persistent rejection?
I had a lot of close calls too. That’s why I kept coming back for more. Because as many times as I heard “no,” there were also so many super close calls for a bunch of incredible projects. And every time, I would think, “It’ll be me next time.” And it almost always wasn’t. Sounds super sad, but that’s the name of the game.

What brought you back to stand up after taking a break in your twenties?
I was finally ready to show up for myself in a way I hadn’t before. I was done being bitter toward my friends who were doing better than I was and ready to focus on myself and do the actual work.

A lot of the power I was feeling then came directly from doing Gerry Katzman’s standup class / writing group. (I recommend it for anyone who wants to start doing comedy.

[His class] was a game changer and operates more like a writer’s room than it does a class. Everyone pitches jokes to each other. And it’s such a warm and open community. You end up with seven minutes of material in like, three months. That would normally take you a year. You get the weekly accountability to keep writing, and it guarantees you get stage time every week.

Do you think it’s still necessary to specify “female comedians” or even discuss the “women in comedy” thing?
Even though there’s definitely a lot more of us now, I do still think we have to talk about it. I still get male bookers asking me for ‘female comic recommendations’ since the club ‘needs to put a woman on the lineup.’

I can name 25 female comedians right now.
I know. I mean, on the one hand, that’s great that the clubs recognize they need to be putting up more women but on the other hand, it just shows that it’s still very much a boy’s club.

Okay, so let’s say you’re choosing a lineup for a comedy show, who are some current comedians you’d want to put up?
Let’s see… I mean, Sarah Silverman is the greatest in the game, but she doesn’t need my shout out. So… Heather Pasternak is great. My writing partner, Rachel Forman. Jessica Keenan. Nicole Aimée Schreiber, that girl makes me laugh so hard. I can’t say you, can I? I can? Okay, you.

Obviously, you’re closing us out.
Yeah bro. I’m headlining the shit out of this made-up show.

Is there anything you think women should not do if they want to be successful in this business? Like, should female comics avoid dating male comics?
Nah, you can date comics. Do whatever you want. Just don’t focus on their career so hard that you lose sight of your own. Speaking from major experience.

So now you’re starring on GLOW and doing the whole damn thing. Was all the rejection and the time and the nonsense worth it?
You know, I don’t even think about it like that. Being a performer and writer is all I’ve ever done. I don’t know what else I would even be doing. I read an interview with Brittany Murphy once and she was asked about what she’d be doing if acting didn’t work out.  And she said, “I don’t know man, probably performing for pigeons in the park.”

That made so much sense to me. I have to perform. So for me, there’s no other option. If I wasn’t acting on GLOW and nothing ever came of my career, I’d be performing for pigeons in the park.

‘Cause I just have to.

Latest posts by Chelsea Frank (see all)
As an Amazon Associate we earn from qualifying purchases. This post may contain affiliate links from Amazon and other sites that we collect a share of sales from.
232 shares