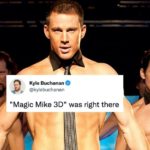 In case you missed it, Channing Tatum announced that there will, in fact, be a Magic Mike 3, better known as Magic Mike’s Last Dance. The final film of the heartfelt comedy series will be available exclusively in 2022 on HBO Max and playing in a continual loop on our TV in case you don’t have HBO.

Twitter was clearly thirsty this morning, because when Tatum dropped the news with a photo of the screenplay, the Magic Mike tweets and memes started rolling in as fast as the shirts come off in the revue. Here’s the best one we could find so far. For the full effect, read them with “Pony” blasting in the background.

2. It probably wasn’t for the money.

i only care about the mmcu (magic mike cinematic universe) https://t.co/Pv8Z28JdPw

7. With consent, of course.

9. Adds Jason Momoa and Oscar Issac to the list…

Latest posts by Rebecca Swanner (see all)
As an Amazon Associate we earn from qualifying purchases. This post may contain affiliate links from Amazon and other sites that we collect a share of sales from.
84 shares