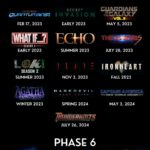 Marvel has been churning out movies and shows as part of their ever-reaching Marvel Cinematic Universe. And, during their panel at the 2022 San Diego Comic Con, they revealed the timelines for Phase 5 and 6.

During the panel Marvel CEO Kevin Feige also announced that Phase 4, 5, and 6 are officially part of the MCU’s Multiverse Saga, which takes place after the Infinity Saga. (The Infinity Wars Saga started in 2008 with Iron Man and ended when someone let Thanos get his hands on all five Infinity Stones.)

The Multiverse Saga will include at least 37 titles and stretch until November 2025. It will include sequels like Black Panther: Wakanda Forever, reboots of franchises such as Blade, and Disney+ TV shows, including a WandaVision spin-off starring Agatha. 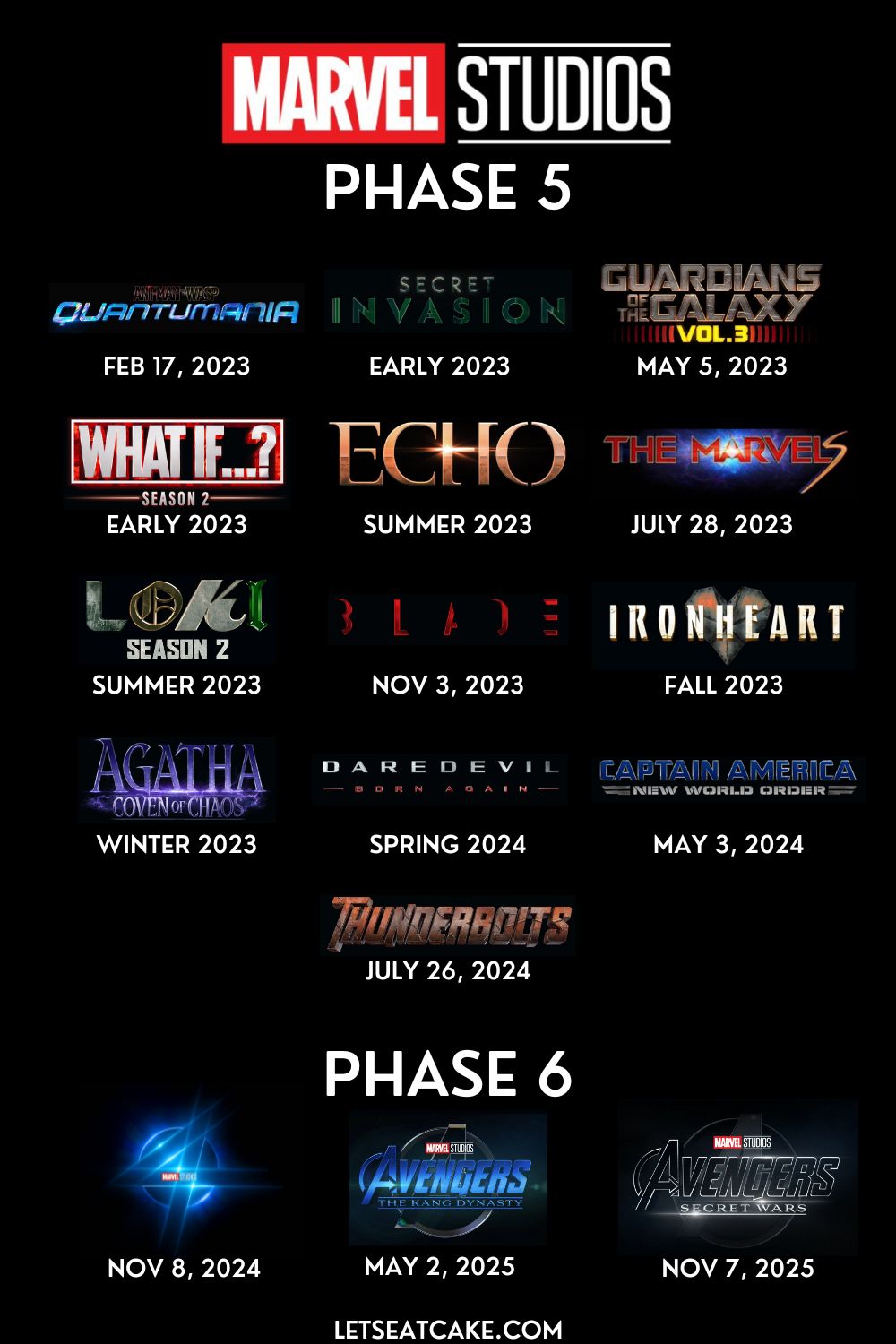 Marvel’s Multiverse Saga: The Timeline for Phase 4, 5, and 6

As the She-Hulk, Jennifer Walters (Tatiana Maslany) is the cousin to Bruce Banner (Mark Ruffalo) and a lawyer for superhero-related cases. Expect cameos from tons of MCU newcomers along with the return of Daredevil (Charlie Cox).

It’s impressive that the most shocking news about this Phase 4 show is that we never thought we’d see a half-hour legal comedy on Disney+.

Returning to Black Panther after the passing of Chadwick Boseman is going to be emotional. And Wakanda Forever isn’t going to make that any easier. Marvel is fairly tight-lipped on plot details, but we do know a few things.

First, as Feige mentioned in December 2020 at Disney’s Investor’s Day, T’Challa (Boseman) will not be recast.

It’s rumored, however that T’Challa’s sister Shuri (Letitia Wright) will become the Queen of Wakanda for the film that wraps Phase 4. We also got a look at the villain, Namor (Tenoch Huerta), and his Atlantis-dwelling allies. Unfortunately, W’Kabi (Daniel Kaluuya, Nope) will not be reprising his role due to scheduling conflicts. We heard it’s because he got abducted by aliens, though. Uh, spoiler alert.

We love Paul Rudd as much as the girl who hired him to DJ her Bat Mitzvah. But Ant-Man? To lead Phase 5? According to Feige, Kang the Conqueror (Jonathan Majors) is the reason an Ant-Man sequel is kicking things off.

Majors made his MCU debut in Loki when he played a Kang variant known as He Who Remains. It seems he’ll be to the Multiverse Saga what Thanos was to the Infinity Saga. And we don’t mean large and purple.

In the Phase 5 opener, Ant-Man (Paul Rudd), and his family get sucked into the Quantum Realm, where they encounter Kang the Conqueror and an unknown character (played by Bill Murray). But it probably won’t be Peter Venkman. Michelle Pfeiffer also stars. 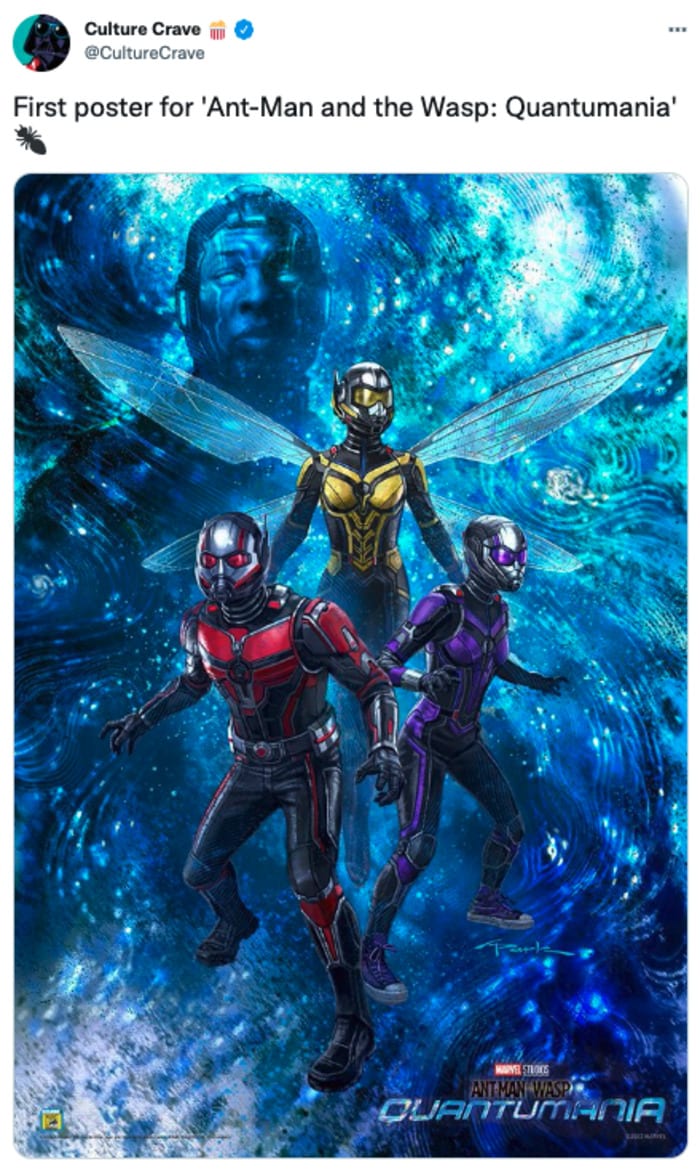 This spy thriller centers around Nick Fury (Samuel L. Jackson) and his attempt to deal with the invasion of the Skrulls. They’re an alien race that can impersonate humans, making it impossible to determine their true identity. Great, more fodder for conspiracy theorists.

Emilia Clarke (Game of Thrones), Cobie Smulders, Olivia Coleman, and Kingsley Ben-Adir are also all set to star in this series. 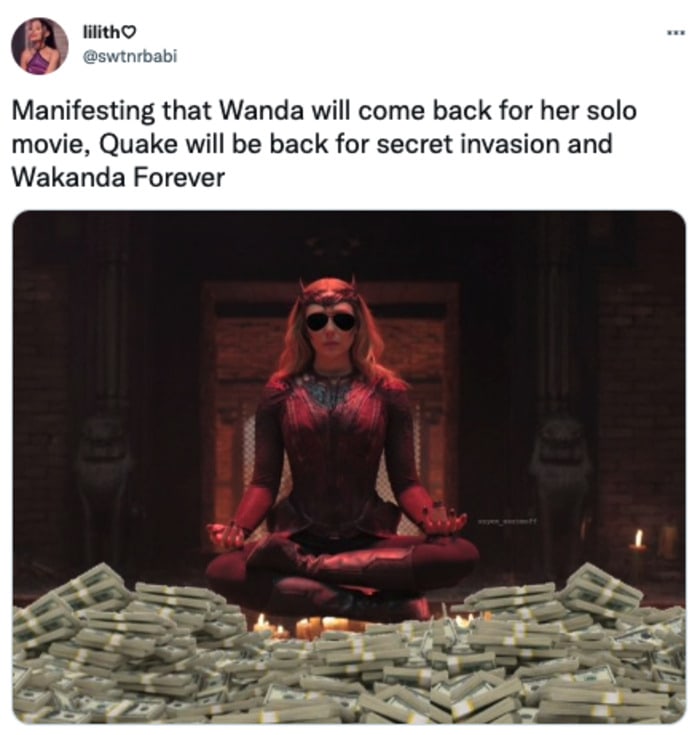 The third and final Guardians of the Galaxy volume is on our doorstep. DoorDash has really outdone themselves this time. Though, they didn’t leave out the Chris Pratt like we asked.

The plot of Volume 3 centers around Rocket’s (voiced by Bradley Cooper) origin – sadly, one that involved a lot of baby raccoon experiments. We can only hope the story ends in a lot of revenge. And tequila. 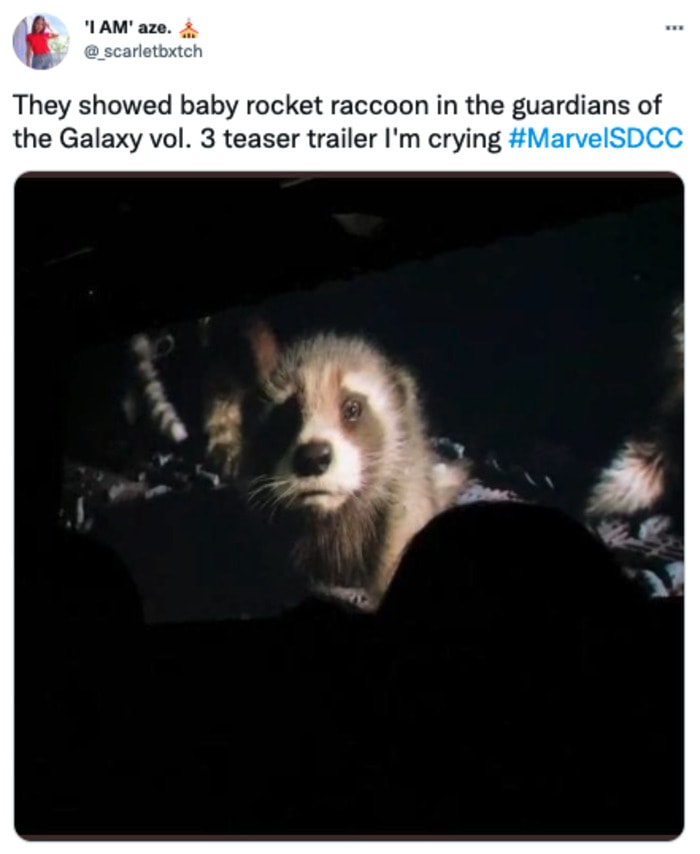 Season 2 of What If…? was also announced at SDCC. If you’re unfamiliar, the animated anthology show explores alternative MCU timelines and answers the question…what if? Just like your 3-year old nephew with a newfound curiosity for…everything. 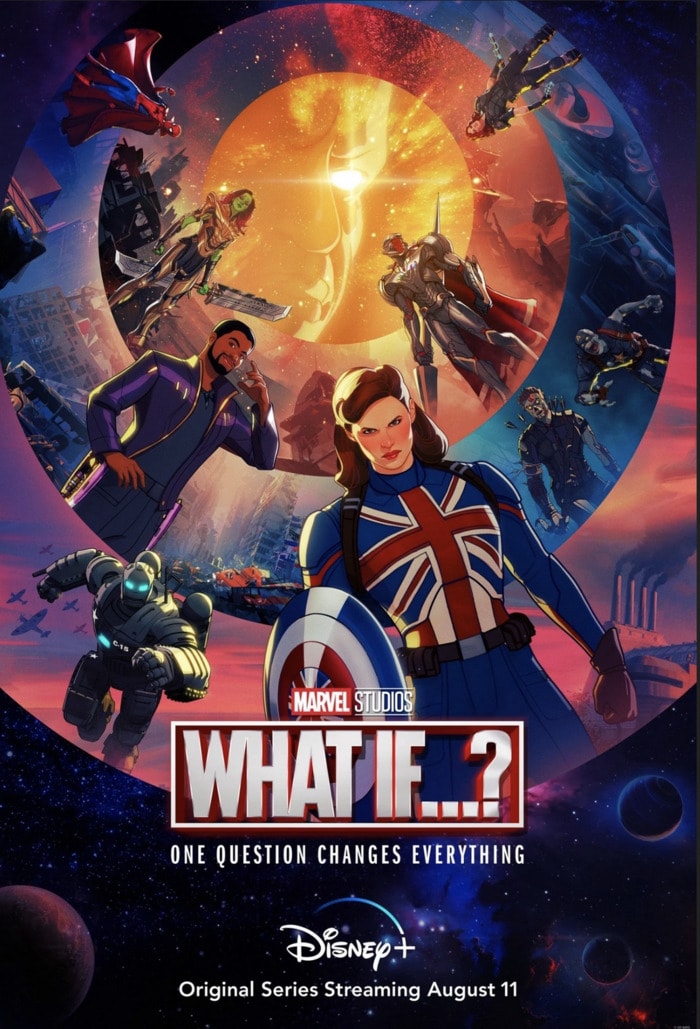 This Hawkeye spin-off focuses on gang leader Maya aka Echo (Alaqua Cox), the first deaf superhero in the MCU. In the show, Maya will face her past, reconnect with her Native American roots, and embrace the meaning of family. If only Vin Diesel wasn’t busy as Groot, he could have lent some familial advice. 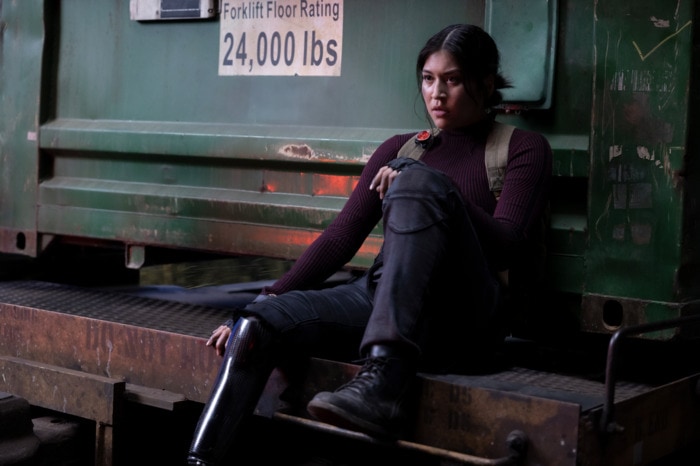 While not much is known about this Captain Marvel sequel, it stars Brie Larson (Captain Marvel), Teyonah Parris (Monica Rambeau), and Iman Vellani (Ms. Marvel). Even if it’s just us watching them all play Animal Crossing for two hours, we’re in. 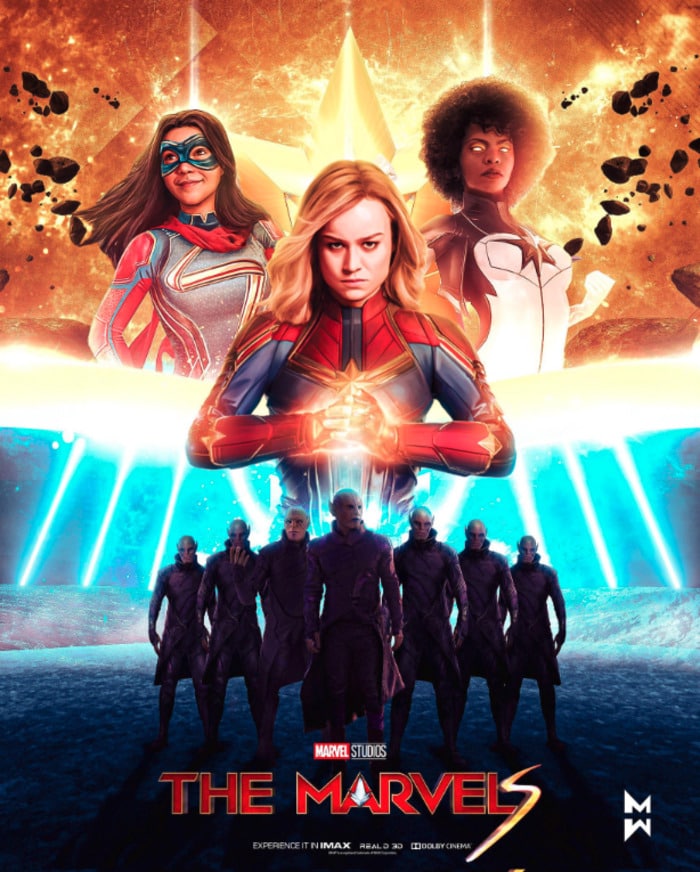 Season 2 of Loki will be returning. Given the previous Kang connection and the near-promise of his future involvement in the MCU, we’d anticipate that to continue in Loki.But, if we’re honest, as long as alligator Loki returns, we don’t really care what else transpires. 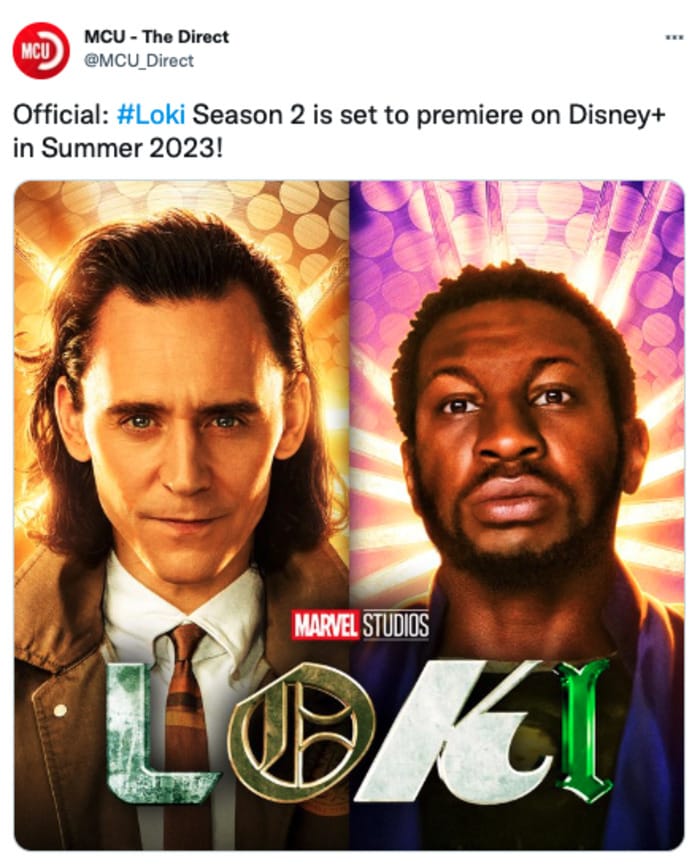 Fans have known since 2019 that Mahershala Ali (Luke Cage, Moonlight) will play the iconic vampire hunter Blade in the reboot. Which weirdly centers around tax evasion. 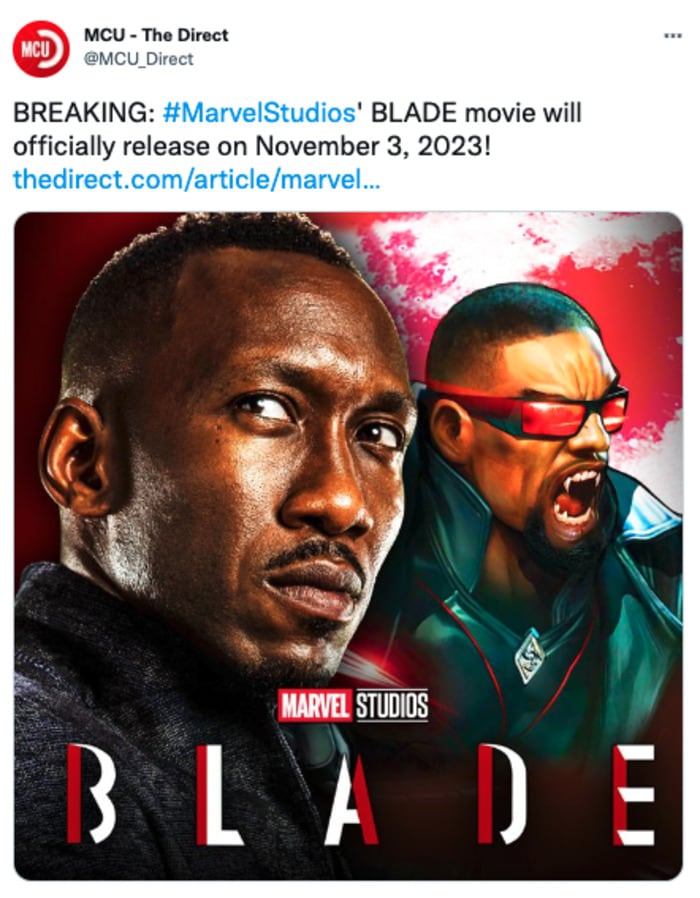 Riri Williams (Dominique Thorne) will debut in the not-yet-released Wakanda Forever and already has her own Disney+ series scheduled. She clearly has some fantastic negotiating skills. Just like us, who recently bought a 2005 Toyota Camry for $20k. It’s got just 125,000 miles!

The story follows Williams as she develops her own super suit similar to Tony Stark’s Iron Man.

This WandaVision spin-off focuses on kooky neighbor and witch Agatha Harkness (Kathryn Hahn). Though it was originally titled “House of Harkness,” Coven of Chaos is a more apt description of what it’s like to try and wrangle 13 people to do anything together on the regular. Tuesday night doesn’t work for you, Samantha? How about Wednesdays? Sabrina, you free then?

The long-awaited return of Daredevil is almost over. Both Charlie Cox (Daredevil) and Vincent D’Onofrio (Kingpin) are confirmed to return in this 18-episode season.

We’ll have to wait and see how close it follows the plot of Frank Miller’s graphic novel in which Karen Page — who has become a heroin addict — reveals Matt Murdock is Daredevil, Murdock hits rock bottom, and Captain America makes an appearance. Wait, did they just describe our family’s Thanksgiving?

Ignoring the violence in Daredevil and staying for the plot pic.twitter.com/AZojO3xxBw

Wonder what exactly Valentina Allegra de Fontaine (Julia Louis-Dreyfus) has been doing during those end-credit scenes in Falcon and the Winter Soldier and Black Widow? Recruiting a team of anti-heroes / potential supervillains known as the Thunderbolts to wrap up Phase 5 of the Multiverse Saga. Their worst crime: not sparing a square.

We can only hope this one —possibly starring John Krasinski — succeeds where every other Fantastic Four has failed. Fourth time’s a charm?

The Avengers as we knew them are long gone. Some are dead and others have retired. We’re guessing it will feature an showdown between Kang the Conqueror and the new Captain America, Thor, Hulk, Hawkeye, and Echo. Or it’ll be a two-hour one-man performance starring none other than Kang. And only Kang.

Kang the Conqueror: "NOBODY is powerful enough to stop me…"

The Multiverse Saga closes with Avengers: Secret Wars. There are two Secret Wars story lines within Marvel Comics so the plot is likely one of those.

In Jim Shooter’s 1984-1985 series, all the superheroes are teleported to a battle arena planet to fight. In Jonathan Hickman and Esad Ribic’s 2015 version, two timelines crash into each other with devastating consequences. The survivors live in a post-apocalyptic universe known as Battleworld, which is policed by different versions of Thor called Thor Corps.

We absolutely aren’t playing favorites, but we also absolutely vote for the latter. 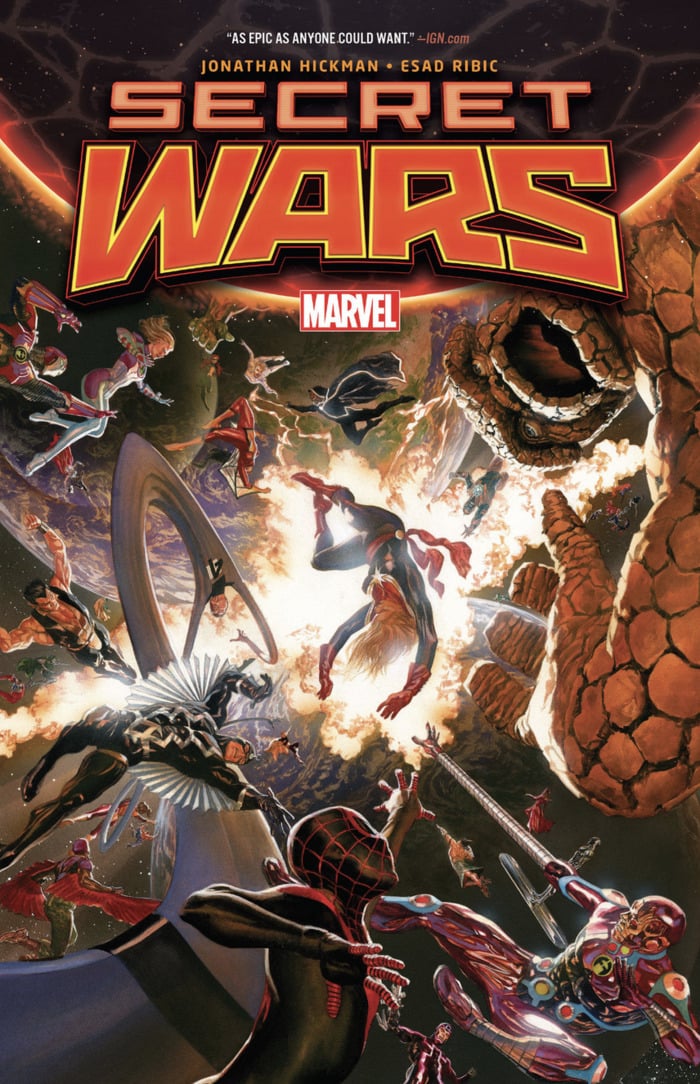 Not much is known about Deadpool 3, including the release date (possibly 2024), the plot, or the cast. Except for Ryan Reynolds as Deadpool. Anything else would be blasphemy. Though Deadpool isn’t part of Phase 6, he’s technically been connected to the MCU within an advert in Thor: Ragnarok.

We’re supposed to announce Logan and Deadpool will soon be the first R-rated movies on Disney+. But we all know some Disney movies should already be rated R for irreversible trauma. pic.twitter.com/FoIbiwKhiG

It’s unclear if I Am Groot is technically part of the MCU, although director James Gunn says the animated shorts are not necessarily part of the Guardians saga. Groot might have something to say about that. Probably “I am Groot.”

Fans have been waiting for X-Men-related news ever since Disney acquired Fox. Little did they know that Marvel was going to jump on the 90s nostalgia bandwagon and make the TV series a direct sequel to the classic X-Men cartoon that aired from 1992 to 1997. While they’re at it, can they bring back The Tick?

Waves of applause wash over Ballroom 20 as the new animated X-Men are revealed. #SDCC2022#dapsmagiclive pic.twitter.com/oRMiLqrUDC

Freshman Year will be an animated take on Peter Parker’s origin story. Parker, are you trapped in Groundhog Day? Just nod three times and we’ll try to get you out. The cast has yet to be announced, with the exception of an appearance from Daredevil, but our bets are on Parker being voiced by Bill Murray.

This upcoming animated series will expand on the “What If…Zombies!?” episode. It will explore an apocalyptic timeline of the MCU, where a plague has turned many of the beloved superheroes into zombies and earn Marvel its first TV-MA rating. How fast they grow up.

Latest posts by Ashley Hubbard (see all)
As an Amazon Associate we earn from qualifying purchases. This post may contain affiliate links from Amazon and other sites that we collect a share of sales from.
39 shares