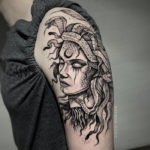 Everyone knows that Medusa has the best hair in Greek Mythology. A head full of loyal pets who are willing to bite your enemies if they get too close? Try getting that from your local Supercuts. If they won’t do the honors, pay homage to the powerful Gorgon with one of these Medusa tattoos.

Medusa has one of the more tragic stories in mythology. She was taken against her will by the sea god Poseidon in Athena’s temple, punished by the goddess for the act, and later, murdered by Perseus. Instead of thinking of Medusa as a monster as some of us might have growing up, we now think of her in a more sympathetic light

The tattoos below honor the feminine power of this legendary being with serpentine hair who could turn anyone to stone with a mere glance. 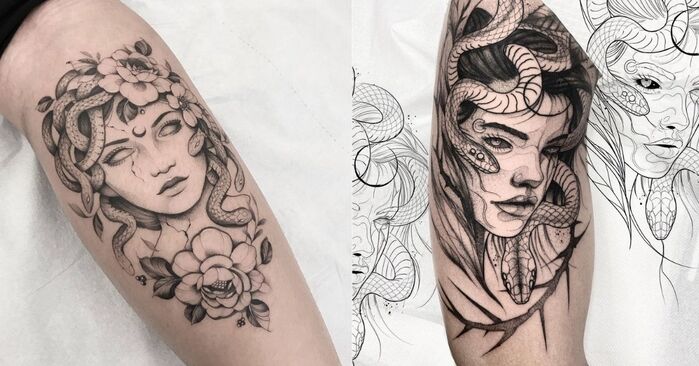 1. Medusa Tattoo on the Upper Arm

Go all in by getting a life-sized Medusa portrait on your stomach. It’ll be a show-stopper anytime you head to the beach. Especially if it retains any of her powers. Was there always a boulder over by that dock?

Ancient Greeks were all about art, so they’d probably be cool with you incorporating it into their rich mythology. We’d suggest giving them a call to ask, but they’re voicemail is always full.

This bold tattoo placement is a great way to let your intentions be known with a simple handshake. That being, you’re not opposed to turning them to stone if they’re annoying. Or worse – they won’t share their chips.

To capture Medusa’s ability to transform people into stone, her portraits are most often shown without irises. That or she’s rolling her eyes at your latest bad joke.

Caravaggio’s painting of Medusa’s severed head is hardly subtle. Then again, neither are we.

Who cares if you can’t afford a fancy designer dress? Neither could Gianni Versace when he selected Medusa’s head as the main component of the iconic fashion brand’s logo. We’ll take that kind of manifestation any day. Although…we’ll likely use it to get a PS5.

This gorgeous black-and-white ink portrait of the Gorgon is enchanting, as long as she doesn’t turn her gaze upon you.

This statue-style tattoo is a meta interpretation of the Greek icon… and a great way to conceal your dry skin. We ran out of our favorite Cucumber Melon lotion weeks ago.

For something dark and spooky, look no further than this skull variation of Medusa. We love that even in death, her snake friends stay loyal. Which is unique for snakes… but hey, it also worked for Taylor Swift.

Medusa’s story is not a fairy tale, so your Medusa ink doesn’t need to look like a princess.

Latest posts by Leah Mulroney (see all)
As an Amazon Associate we earn from qualifying purchases. This post may contain affiliate links from Amazon and other sites that we collect a share of sales from.
123 shares