Most of you know us for our funny content. You’re probably a fan of our memes, our puns, or our nonstop Starbucks content, all run through our highly caffeinated editorial team. But, sometimes, a member of the meme community does something extraordinary.

And no, we don’t mean coming up with a new Ben Affleck meme.

Tommy Marcus, the guy behind the large meme account @Quentin.quarantino has created a GoFundMe to get targeted Afghans out of Kabul. In two days, the fundraiser has raised more than $6.1 million dollars. 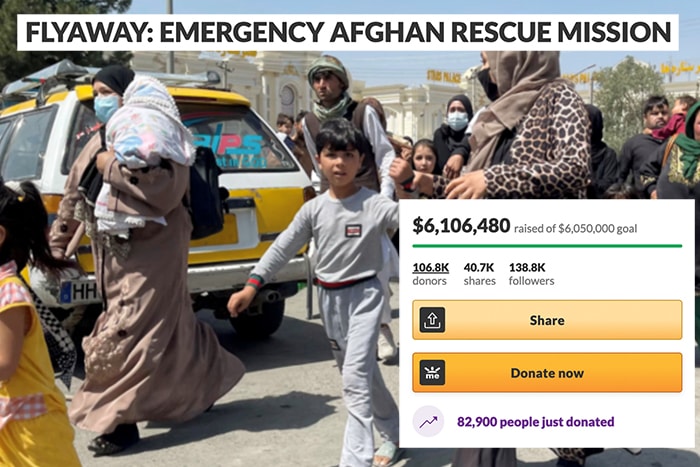 Why Do These People Need to Evacuate?

If you haven’t been watching the news, the Taliban seized control over the Afghan capital of Kabul after the U.S withdrew its military forces. The current situation has become dire for all citizens, but the Taliban reportedly have a “kill list.” Journalists, women, members of the LGBTQIA community, activists, human rights lawyers, judges, and more are said to be on it.

Marcus writes in the GoFundMe, “If these people do not get rescued as soon as possible, neither they nor their family will make it through the month. The Taliban have a KILL LIST and are going door to door, searching for these people and reportedly killing them on sight if found. Every one of these individuals on the manifest have been vetted.”

The money raised will fund the cost of getting private planes in and out of the city and into countries nearby. It costs $550,000 to evacuate about 300 people via two airplanes. And you thought the Delta Comfort Plus seats were pricey.

The initial goal was quickly surpassed, so the current intention is to move as many people on the list (and their families) to safety. Marcus explains, “If we raise twice the amount ($1,100,000), we’ll do another run. There are enough people in need to make many round-trips with our two airplanes. We will continue multiplying as goals are met.”

They will be donating any leftover funds to the International Women’s Media Foundation, “who are actively helping with this rescue effort + settlement, to help the people we rescue start a new life.”

Marcus writes, “Every $1,500 raised represents a seat on one of the planes, and a life saved.” Donate here.

Latest posts by Rebecca Swanner (see all)
As an Amazon Associate we earn from qualifying purchases. This post may contain affiliate links from Amazon and other sites that we collect a share of sales from.
545 shares