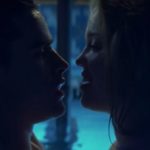 Back in the 90s, the only way you could see something sexy was wait 30 minutes for a two-minute video to buffer or hope your parents let you see a R-rated movie. Now, you can look at all the hot photos and watch all the sexy movies you want without worrying someone is going to pick up the phone.

So, that’s where these films come in. If you grew up in the 90s or 00s, the sex scenes from these movies might have helped awaken your sexuality. Or continued where David Bowie and his pants left off.

Brad Pitt and Angelina Jolie – at peak Brangelina status – play Mr. and Mrs. Smith, secret assassins sent to kill each other. After they destroy the house in their battle to do so, the passionate fight leads to passionate make-up sex.

Everyone knows that post-fight sex is a special kind of steamy, and this scene takes it to another level. Take notes. But maybe leave out the total house destruction? The kitchen is finally clean.

This movie follows the relationship and basketball careers between childhood sweethearts Monica (Sanaa Lathan) and Quicy (Omar Epps). The build-up is a slow burn romance. You really feel how much the characters feel for each other. And how much they want to feel each other.

The sex scene that still catches our breath is their first time together. The chemistry between the two off the charts and you can sense the first time jitters. Watch it here.

In this cult classic, Natasha Lyonne plays Megan, the titular cheerleader who is sent to a conversion therapy camp. There, she falls in love with Graham (Clea DuVall). When they sneak away to hook up, it’s a sensual scene that’s made even hotter by the fear that they may get caught. Lyonne and DuVall top the WLW heartthrobs charts, and our crushes on them started here.

Everyone was shocked when Eminem became a bonafide movie star in 8 Mile. The Slim Shady guy? With his mom’s spaghetti? And the vomit?

8 Mile was one of the top-grossing films of 2002 and also had one of the hottest sex scenes. When Jimmy (Eminem) and Alex (Brittany Murphy) hook up in a car factory, the desperation and chemistry are out of control. We definitely lost ourselves in that moment. Watch it here.

This sexy scene in Pretty Woman features Richard Gere and Julia Roberts at their peak of popularity. The tickle of the piano keys breaking the tense silence makes you want to hop on the nearest instrument and go wild.

Do baby grand pianos come with same day shipping? Because all we have is this recorder.

You can feel the sexual tension between Acid Burn (Angelina Jolie) and her frenemy/co-conspirator Zero Cool (Johnny Lee Miller) from the moment these two meet onscreen. They do too, apparently, because each has a hot dream about the other before they finally get it on… with all of their friends watching. And then again later in a pool… with their friends seemingly watching from afar. Well, at least they know their kink.

Considering how much chemistry these two had, it’s not that surprising they were briefly married each other afterwards. Watch it here.

This movie made us all want to break into the Y’s pool after hours to reenact it, but that would definitely get you on a list. And not one you’d want to brag about.

In it, Madison (Erika Christensen) is obsessed with high school swim star Ben (Jesse Bradford). Your blood is already pumping from the psychological thrills, and this scene sends your blood pumping somewhere else. Watch it here.

Kristen Dunst’s Marie Antoinette tries to get laid the whole movie, but nauseating Louis XVI (Jason Schwartzman) is not into it. When she finally gets to hook up with Axel von Fersen (Jamie Dornan), you can feel her confidence and energy spring back to life.

And who can forget the look: the thigh high stockings, the feather in her hair, the hand fan barely hiding her suit d’anniversaire. Let him eat this cake. We’re all hungry.

Latest posts by Madison Higgins Hwang (see all)
As an Amazon Associate we earn from qualifying purchases. This post may contain affiliate links from Amazon and other sites that we collect a share of sales from.
206 shares