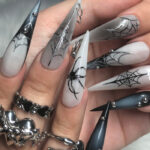 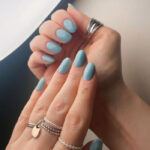 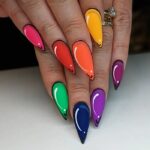 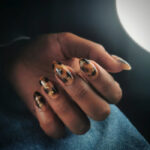 New year, new trends. You didn’t expect us to be into hair bump-its forever, did you? The top nail designs for 2023 mirror what’s popular in fashion, art, and pop culture. Luckily, without the risk of low rise jeans.

We consulted what’s dominating social media platforms like Pinterest and TikTok so you can be ahead of the curve with your nail art. And if we happen to be wrong, please don’t tell our sister. No one ever thought this day would come.

From rising trends like chrome designs to revived designs like pop art nails, this is going to be the hottest nail art in 2023. Manicured pinky promise. 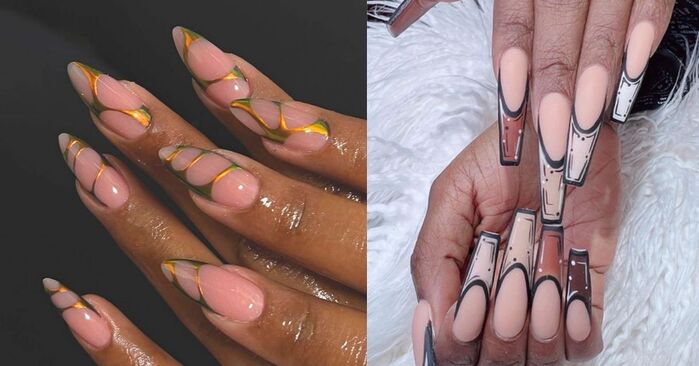 Wednesday Addams is the coolest girl in class, especially with the release of the new Netflix show starring Jenna Ortega. All things black and gothic are coming for us as beauty trends for 2023.

Plain black nails are one option, but Addams-Core nails are more ornate and channel the Goth Queen herself. Pet scorpions and all.

Pinterest is predicting “airy” styles to be big in 2023. You might be wondering how that translates to nails, which are distinctly made of…not air. Think frilly, feminine, flirty, and pastels. Like Bridgerton, but nails.

Rather than going all in on traditionally “girly” colors (not that colors have genders) you can expect to see these pastels in cool tones, like blues and purples. No botched wildfire-starting baby announcement necessary.

Tortoiseshell nail art is rising on TikTok, and it’s often paired with a neon accent. The classic print is animal-inspired, but not quite so loud. It’ll give you some flair without going full-on Carole Baskin.

Long, over-the-top nails might be left in 2022, because Pinterest is forecasting shorter nails in 2023. Our apologies to cats everywhere for the soon-to-be-lacking scratchies.

One way you’ll see this manifest is on the French manicure. You might have thought it was done, but it’s proven itself to be a design that will just not quit — and in 2023, you’ll still see it, just on shorter nails.

Magenta is Pantone’s Color of the Year and you can expect it to have its moment as a nail trend. Plus, with the whole Barbiecore movement and the hype around the Barbie movie coming in September 2023, we’re positively peachy at the thought that pink nails are going to shine. Also, have you seen our site?

We called this one last year, but mushrooms are very much a *thing* right now. We aren’t sure whether it’s because people are trying to embrace the psychedelics or if they just really like their veggies. Either way, we get it. A fun-guy is the life of the party.

While mushroom home decor is all the rage, your nails don’t want to feel left out. Step aside, succulents. You had your moment.

Yes, chrome nails were big in 2022. But guess what? They’re not going anywhere. Get that acetone out of here.

Expect to see them transformed for 2023, though. Instead of only seeing all-over chrome in a traditional color, you’ll start to see chrome designs in other metallic shades, featured as accent nails, and other variations on the trend. Because we must avoid being basic at all costs. Hide the Starbucks cup!

One quick scroll through TikTok will reveal approximately 7,292 people making something that looks like it’s a cartoon. Cakes, makeup, nails, you name it. Elon Musk has himself covered.

Pop art or cartoon-inspired nails are only going to continue to gain popularity in 2023. Stock up on black nail polish, because you’re about to be outlining all your nails for the foreseeable future. Your new career as a cartoonist starts today.

The texture trend is all about…well, texture. Rhinestones, embossing, corduroy, sweater material, it’s all fair game. Yes, even hedgehog scales. Though we don’t necessarily recommend that.

Added texture gives your fingers a 3D effect that will be very ‘in’ for 2023. 2D hands are so yesterday. But the true fans know that 1D will never go out of style.

Orange hasn’t always been a go-to nail shade, especially outside of the fall season. Longtime lovers of the color will be happy to know that it’s back and better than ever, baby.

In 2023, burnt orange, copper, and sienna will all be popular, which means everyone will be painting their nails these earthy shades. Everyone except that one friend whose entire brand is only using white nail polish.

People don’t have time for, like, anything these days. That’s why press-on nails are going to become even more popular options in 2023.

They’re easy to put on and pop off, and they come in every color and pattern you could ever want. Don’t shoot the messenger, nail techs!

Latest posts by Hedy Phillips (see all)
As an Amazon Associate we earn from qualifying purchases. This post may contain affiliate links from Amazon and other sites that we collect a share of sales from.
37 shares