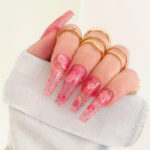 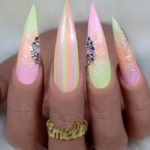 As if your manicurist doesn’t put enough pressure on you to pick a color when you sit down in the chair, you also have to decide what nail shape you like. Because, you could always leave it up to the dealer’s choice, but it’s kind of weird to get your nails done in the middle of a blackjack table.

So here’s a super simple guide to the seven most popular nail shapes and what kind of nail length they’re best for.

We even threw in two extra options for when you need something really funky for your Halloween nails. Broom not included.

How Many Nail Shapes Are There?

There are seven main types of nail shapes:

But technically, there are an infinite number of shapes, like lipstick, flare, or the one that comes from catching your nail on a loose thread and now is half torn off.

The 7 Most Common Nail Shapes

Most people’s nails naturally grow square-ish on their own, so there isn’t much upkeep required to maintain this shape. It’s also pretty flattering, unlike that newsboy hat you thought would make you look like Hilary Duff back in 2003.

“My favorite nail shape is tapered square,” says nail artist Liz of @marinesnailedit. “It suits everyone’s fingers so well no matter how short or long the nails are.”

The oval nail shape is like a circle, but longer. We’ll be here all week for geometry lessons!

This one is for the girlies with the wide nail beds, because it’s great at helping elongate your nails. To get oval nails, file the sides of the nail slightly diagonally toward the center, then round out the tip.

When a square and an oval love each other very much, a squoval is born.

This nail shape is pretty conservative so it’s great for anyone who actually needs to pick things up and type on keyboards. It works best with a short-to-medium-length nail and is easy to nail down. To create the squoval, file the top of the nail straight, then round out the edges.

Round nails look good in just about any length and with any design. If you have nails that are prone to breakage, this nail shape helps visually elongate the fingers and won’t break as easily as some of the others.

To create round nails, follow your nail’s natural curve to round out the entire tip.

While almonds might be one of the more boring snacks out there, we’ll take it as a nail shape. The almond looks almost identical to the oval nail shape, but has a slightly more pointed peak. And, it’s great for long nails.

“My personal favorite nail shape is almond,” says Tamara of Artistry by Camille. “I have small hands, and this shape makes my hands appear more elegant, and it’s also a lot easier to shape.”

If you’re a nail DIY-er, this one is probably going to stress you out. Coffin nails — also known as ballerina nails — are one of the most difficult nail shapes to get right on your own.

Take this one to your nail salon and let them handle it, because when it’s done right, it’s so right for natural long nails or acrylics. Tutu not included.

The stiletto is the baddest of all the nail shapes. If you want these long pointed tips, you’ll need to adorn your nails with long acrylics or to tell us how you get your nails that long without them breaking.

They’re literal daggers on the tips of your fingers. Some may say that’s scary. We say it’s a great way to pick up cheese cubes from an appetizer platter!

As you probably guessed, the lipstick nail shape features an angled edge just like lipstick. Or at least one before you drop it on the counter and let it bang around in your purse for a month.

If you’re feeling adventurous and want to try this shape, file your nails to create a peak, then file one side down to create the sharp edge.

Then there’s flare nails, which I have yet to actually see in real life. This shape reminds me of bell bottoms, Doritos, a duckbill, or any other triangular-shaped items that seem like they’d get in the way if they were on your fingers. 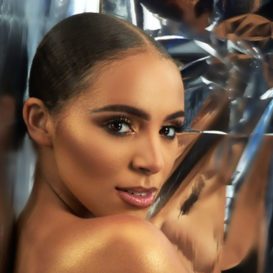 Kaitlyn Morris
Kaitlyn Morris is a native of New Orleans. She has insatiable wanderlust and would rather be somewhere abroad at all times. She writes for her own lifestyle blog According to Kaitlyn and as a content creator for Search Influence. Follow her on Instagram at @kaitlyn_amor or on Twitter.

Latest posts by Kaitlyn Morris (see all)
As an Amazon Associate we earn from qualifying purchases. This post may contain affiliate links from Amazon and other sites that we collect a share of sales from.
241 shares