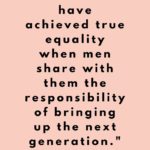 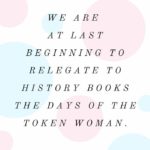 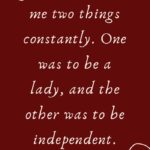 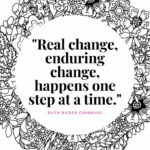 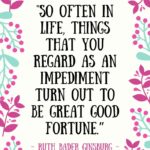 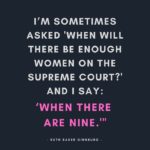 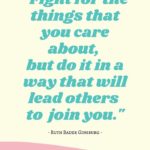 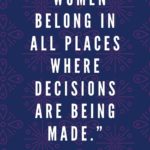 On September 18th, Ruth Bader Ginsburg — U.S. Supreme Court Associate Justice, women’s rights activist, our Notorious R.B.G. — passed away at the age of 87. She spent her lifetime fighting against gender discrimination and breaking barriers for women and, not surprisingly, RBG’s quotes speak volumes.

She smashed through so many glass ceilings, you could use the broken glass to make RBG memorial mosaic portraits to sell on Etsy. When she became a law professor at Rutgers Law School in 1963, she was one of just 19 female law professors in the country. She co-founded the Women’s Rights Project at the ACLU and argued six gender discrimination cases before the Supreme Court, and won five.

The Supreme Court must have been tired of watching her sweep the floor with her opposing counsel, because they recruited her. In 1993, she became the second woman and first Jewish woman justice on the Supreme Court.

If it wasn’t for her, Let’s Eat Cake might have not existed. It’s hard to start a humorous lifestyle blog for Millennial women if you can’t open a bank account to buy the domain. That’s just one thing RBG made possible. In fact, many of the rights women have are thanks to her.

Some of the rights RBG helped secured for women:

1. “Women belong in all places where decision are being made. I don’t say [the split] should be 50-50. It could be 60 percent men, 40 percent women, or the other way around. It shouldn’t be that women are the exception.”
–  USA Today 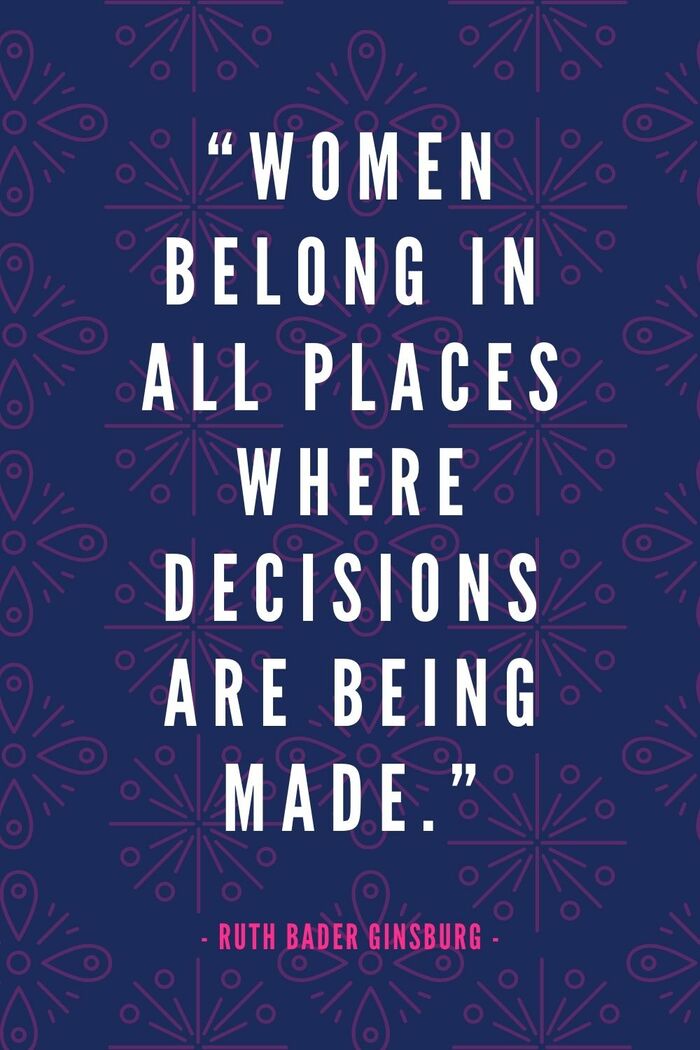 2. “[W]hen I’m sometimes asked when will there be enough [women on the supreme court]? And I say ‘When there are nine.’ People are shocked. But there’d been nine men, and nobody’s ever raised a question about that.”— 10th Circuit Bench & Bar Conference at the University of Colorado in Boulder (according to CNS news) 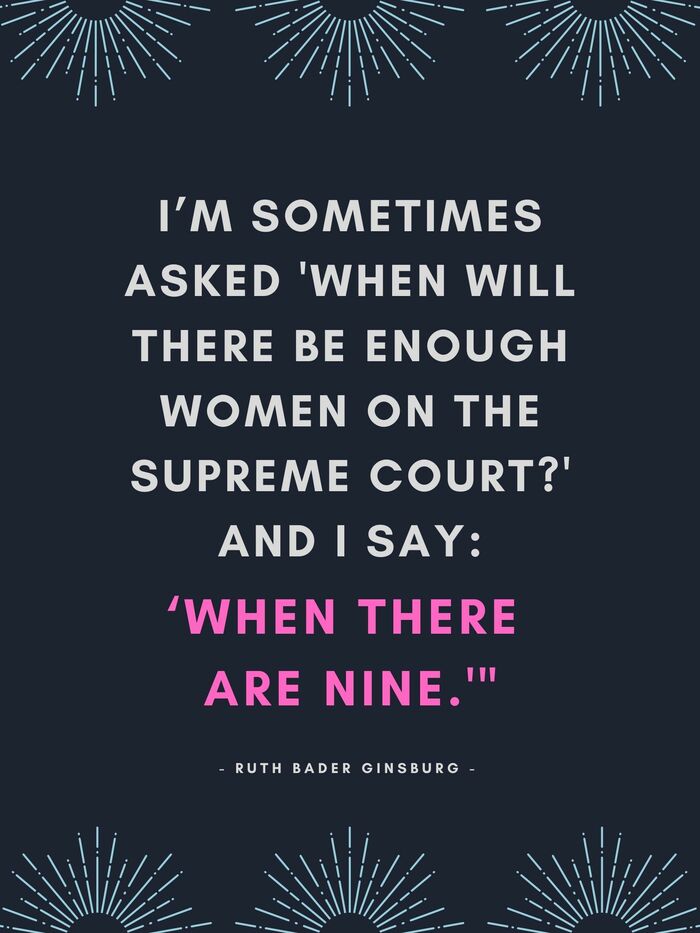 3. “Women will have achieved true equality when men share with them the responsibility of bringing up the next generation.”
— In an interview with New York City Bar Association 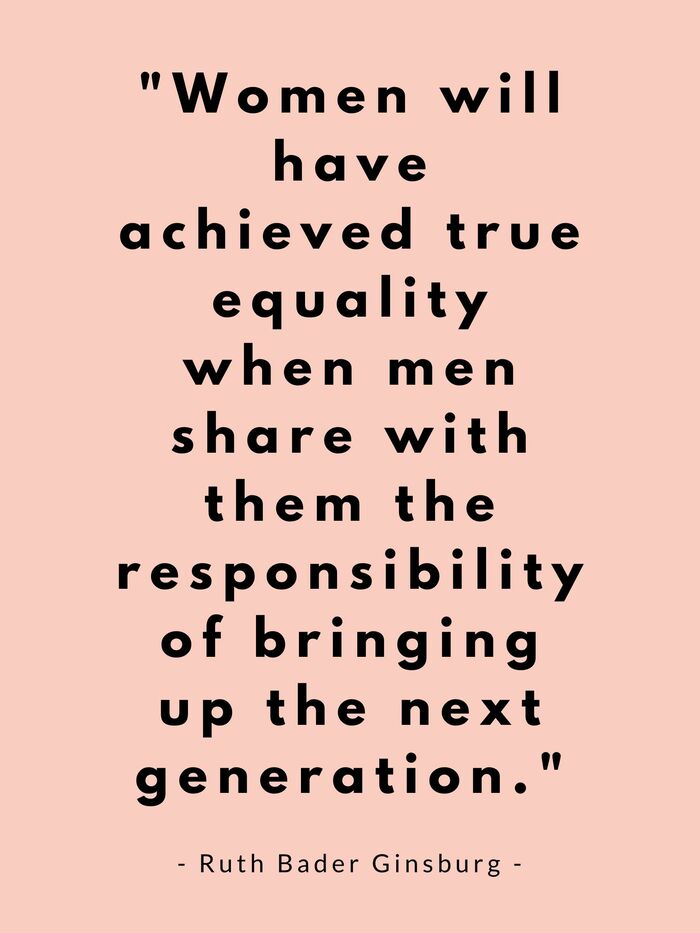 4. “I pray that I may be all that [my mother] would have been had she lived in an age when women could aspire and achieve and daughters are cherished as much as sons.”
— in her Supreme Court acceptance speech

5. “We are at last beginning to relegate to history books the days of the token woman.”
— CNN 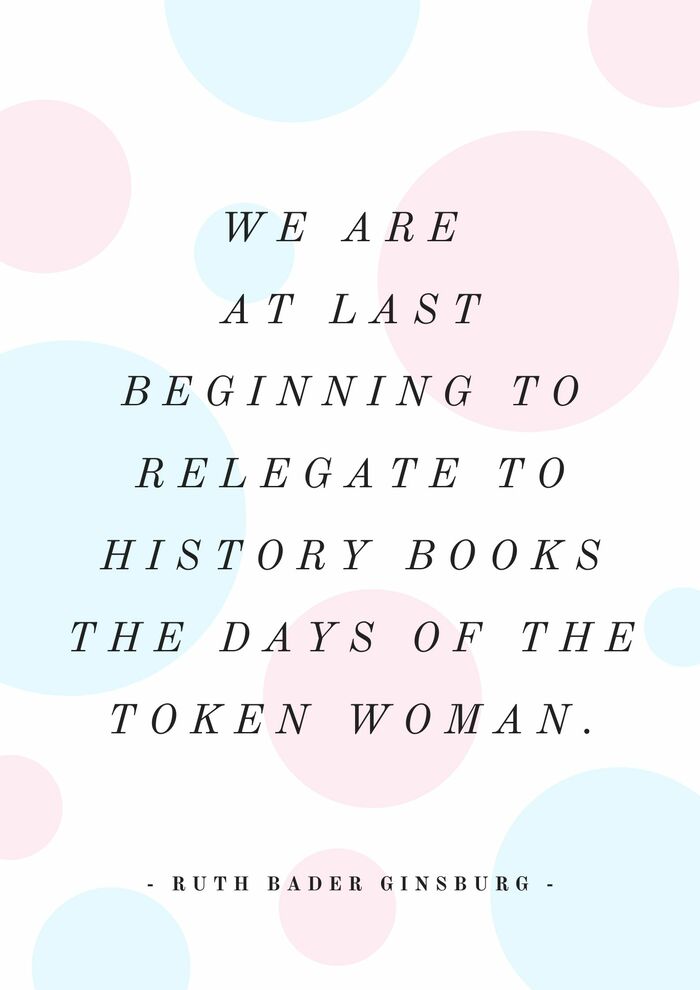 6. “Fight for the things that you care about, but do it in a way that will lead others to join you.”
— At Harvard in her speech accepting the Radcliffe Medal 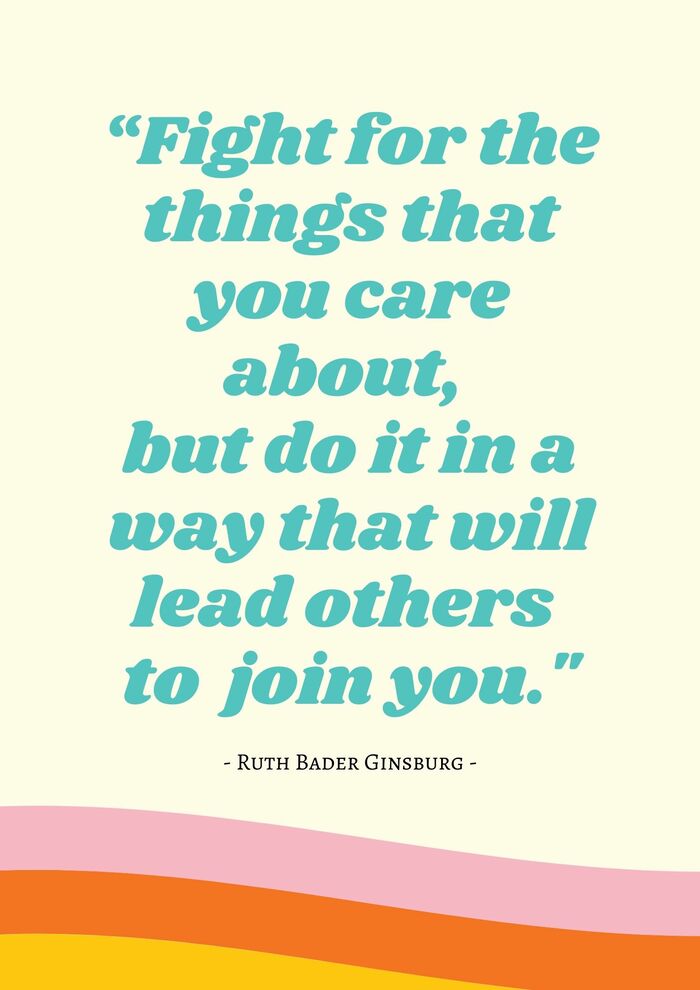 7. “One thing that I did feel in law school was that if I flubbed, that I would be bringing down my entire sex. That you weren’t just failing for yourself, but people would say, ‘Well, I did expect it of a woman.’ … I was determined not to leave that impression.”
— In an interview with Slate

8. “My mother told me two things constantly. One was to be a lady, and the other was to be independent. The study of law was unusual for women of my generation. For most girls growing up in the ’40s, the most important degree was not your B.A., but your M.R.S.”
— ACLU 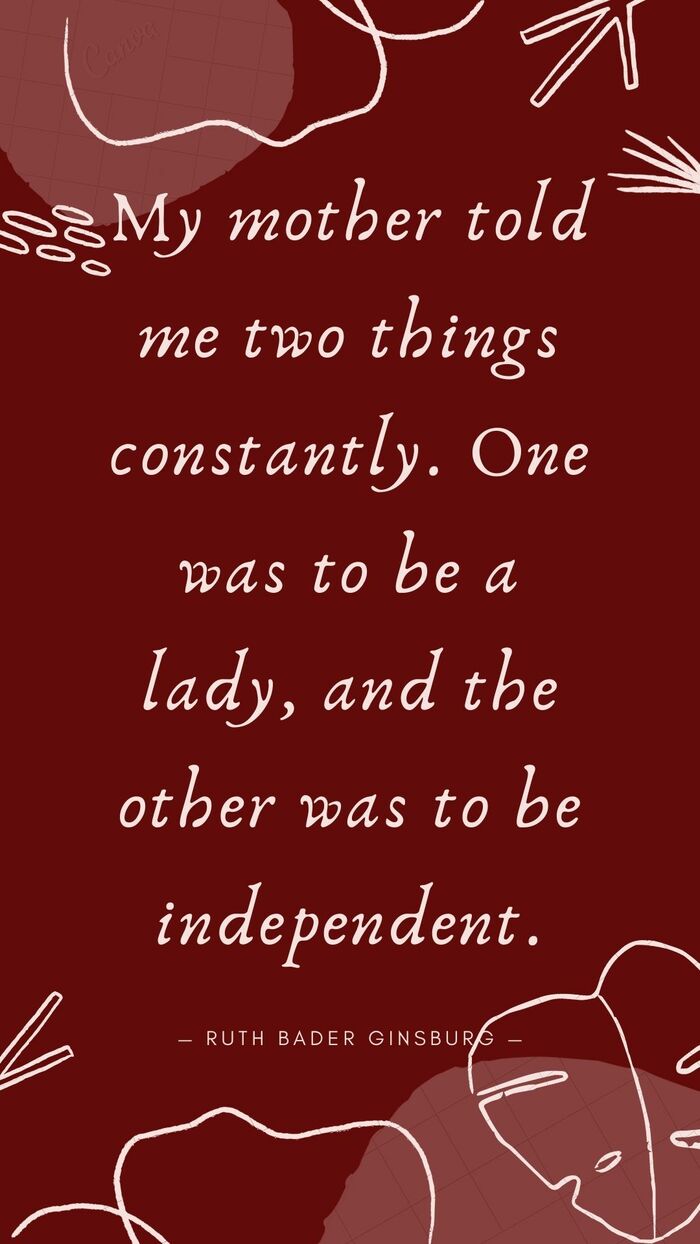 9. After not being hired full-time at a law firm due to her gender: “Suppose I had gotten a job as a permanent associate. Probably I would have climbed up the ladder and today I would be a retired partner. So often in life, things that you regard as an impediment turn out to be great good fortune.”
— Makers 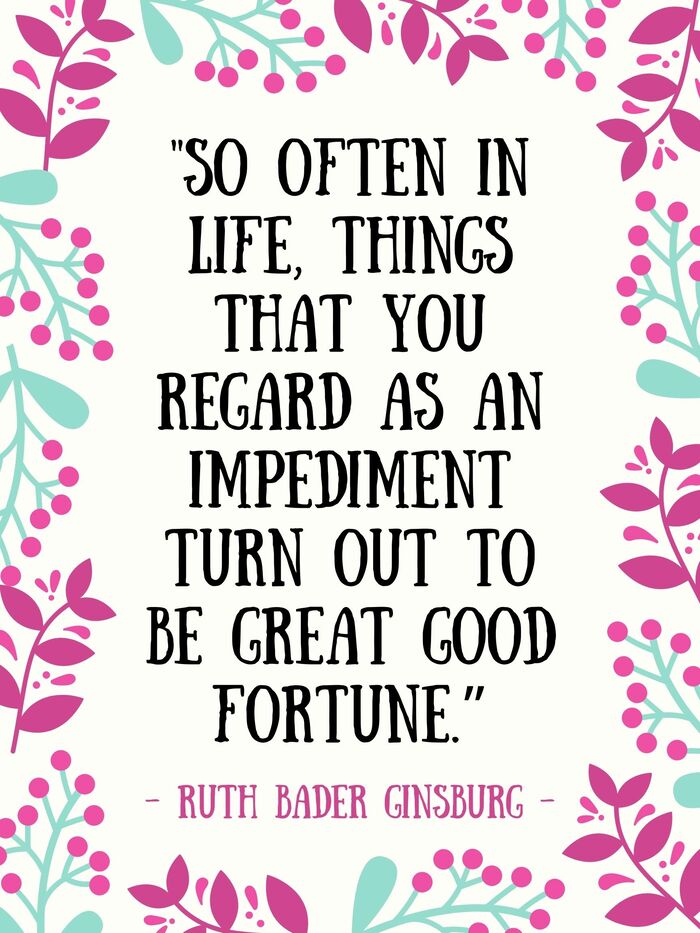 10. “Real change, enduring change, happens one step at a time.”
— in Notorious RBG 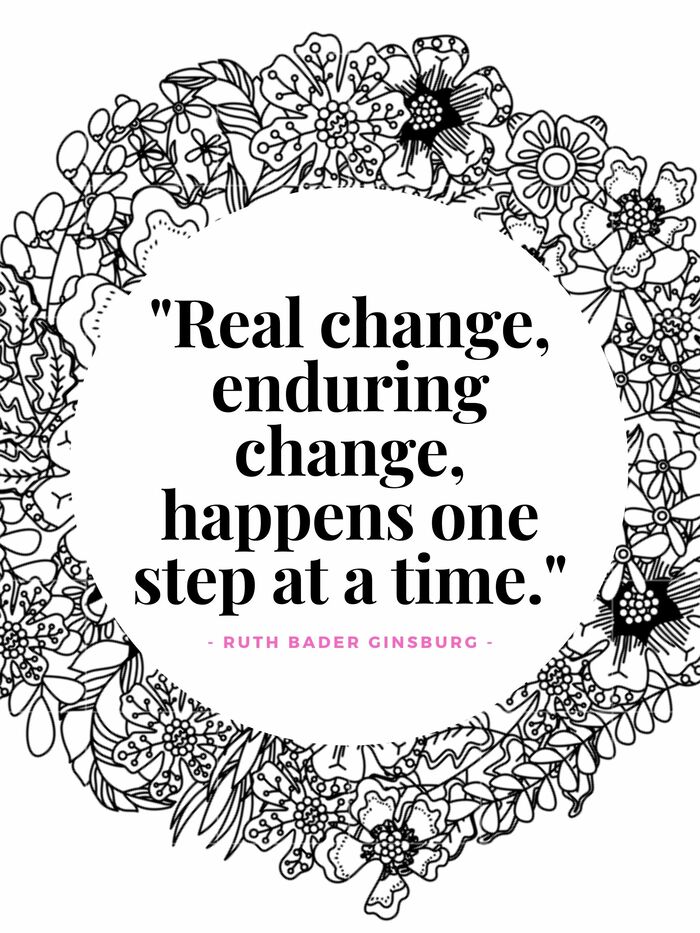 On Fighting for Change

11. “No doors should be closed to people willing to spend the hours of effort needed to make dreams come true.”
— Brown University commencement address 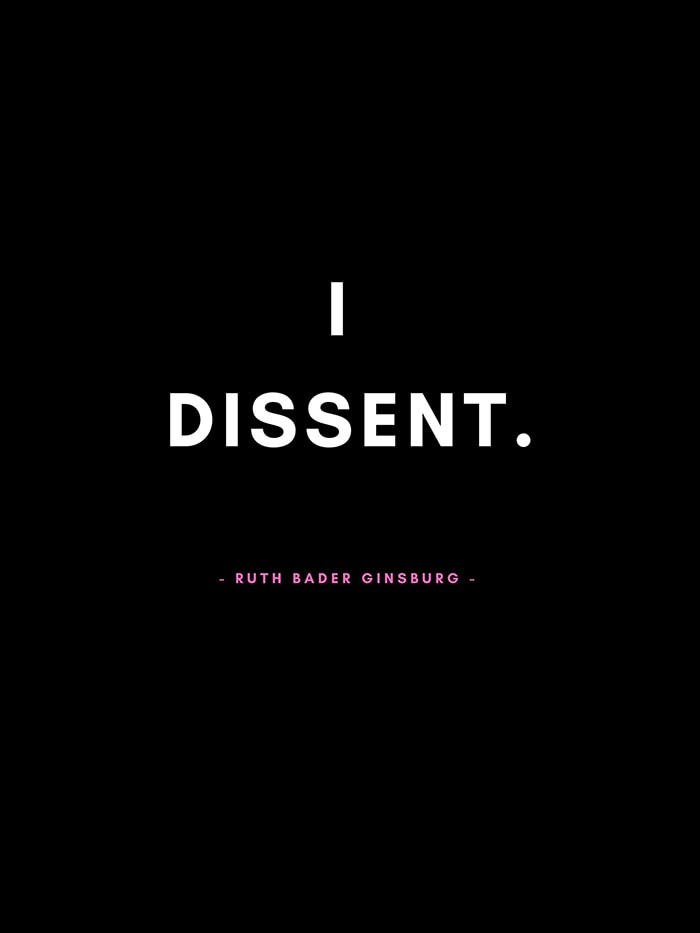 13. “[I want to be remembered as] someone who used whatever talent she had to do her work to the very best of her ability. And to help repair tears in her society, to make things a little better through the use of whatever ability she has.”
— MSNBC

Latest posts by Madison Higgins Hwang (see all)
As an Amazon Associate we earn from qualifying purchases. This post may contain affiliate links from Amazon and other sites that we collect a share of sales from.
266 shares