Christmas has finally arrived, and we think we all need it. So, here comes Clausthaler with Santa Clausthaler, a non-alcoholic beer that you can enjoy all day long without the fear of reliving last year’s holiday decorating disaster. (We put all the bad ornaments on the front of the tree and Santa is never going to forgive us.) 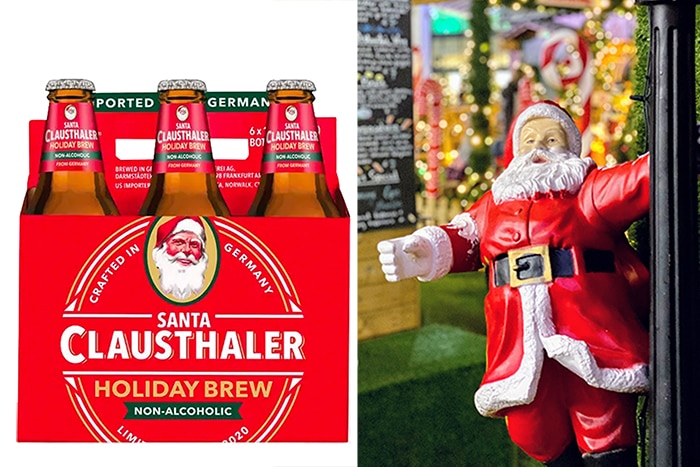 We love a good Christmas beer. But, if you don’t drink or just don’t want to resemble Blitzen by noon, and you want to keep the festive vibe going, that’s where this cranberry and cinnamon spiced limited-edition non-alcoholic beer comes in.

Last year, was all about wellness drinks. This year, our liver took one for the team. And, next year, it looks like non-alcoholic brews are going to be all the (sober) rage.

The attempts to make non-alcoholic beer were popular in the 1970s but no one could quite get it right. Not until German brewing company Clausthaler  invented a brewing process that stopped fermentation right before alcohol was about to develop. The process, called controlled fermentation, gives you all of the taste of beer (and the smell of your favorite Christmas candle) without the buzz. Or the hangover. Or the wax!

Santa Clausthaler is a 50/50 mix of Clausthaler’s original malt brew and a cranberry cinnamon drink. If you were to throw an elf into a cup this is probably what it would taste like. Not that we’d know.

What Does Santa Have to Say About This?

We hear that Mr. Claus approves it. His face is even on the bottle with a jolly ol’ smile. So this year, instead of milk, pour St. Nick a nice Santa Clausthaler and bribe your way to the front of the nice list.

Santa Clausthaler is available across the United States for around $8.99 a six-pack.

Latest posts by Katie Schindelheim (see all)
As an Amazon Associate we earn from qualifying purchases. This post may contain affiliate links from Amazon and other sites that we collect a share of sales from.
206 shares