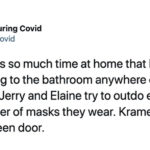 Matt Shirley, better known as that guy who makes awesome charts on Instagram as @mattsurelee has branched out. His newest project? Seinfeld. Well, Seinfeld during COVID, if we’re being specific.

Shirley has taken on the arduous task of creating a parody Twitter account that reimagines would have been Seinfeld’s 10th season. Except that all episodes about nothing take place during the pandemic.

What inspired the project? “I’ve always been a huge fan of ’90s sitcoms and how the episodes were described so bluntly and matter-of-fact,” says Shirley. “I really enjoy writing in that style and I think the Seinfeld gang and I would have similar reactions to Covid and lockdown so it was something that came fairly natural to me once I got the idea going.”

Shirley says though he was on the younger side when it came out, he’s a huge Seinfeld fan, which makes the episode conceits that much more believable. So, we had a few questions for him.

What’s the Best Original Seinfeld Episode?
I think my favorite episode is The Summer of George. But special commendations to the episode that was written backwards. That’s the type of thing you would never ever see on TV today.

[Edit: It’s The Betrayal, which, weirdly, isn’t about our roommate who ate the last plums in the icebox.]

Who’s Your Favorite Character?
My favorite character is probably Frank Costanza. I don’t know what that says about my personality, but I enjoy his old-man-ness.

Who Would Make the Worst Roommate?
I really think they would all be terrible roommates in different ways. But, I think Kramer would be the worst. I can’t deal with zany experiments happening in my apartment all the time. And I’m not sure he sleeps.

Whether Jerry decides to take him for a ride in a fancy automobile after all is yet to be seen.

10 of our Favorite Seinfeld During Covid Tweets

Here are some of our favorites. Tune in for the rest at @SeinfeldCovid.

Jerry runs into Uncle Leo not wearing a mask and has to try to convince him that Covid is real. Elaine dates an essential worker. George starts hoarding toilet paper 6 months too late.

Kramer unwittingly attends an anti-mask rally while wearing a mask and runs into David Puddy. Jerry starts to date all the girls he’s dated before since he can’t meet anyone new. Elaine does a dry January.

5. For once, we empathize with Newman.

George, Jerry, and Elaine try to finish a game of Monopoly. Kramer creates an indoor driving range in his apartment. Newman complains about being an essential worker.

6. Do you get extra turns for staying in your apartment?

7. We feel you, Jerry. We’re starting to run out of Netflix shows.

Jerry is almost out of money since all of the comedy clubs have shut down and seeks George’s advice on how to pinch pennies. George outlines the 12 Pillars of Cheapness.