The new Marvel movie Shang-Chi and The Legend of The Ten Rings opened last weekend in theaters, and nabbed an impressive 92% fresh rating on Rotten Tomatoes.

It’s the first Marvel Cinematic Universe film focused around an Asian superhero, with Simu Liu starring as kung fu master Shang-Chi. The movie will see Shang-Chi, who’s spent years distancing himself from his father’s criminal organization the Ten Rings, finally confronting the demons of his past. Better him than us!

While the MCU movie will offer new fans an introduction to Shang-Chi, the Master of Kung Fu already has a very rich history in Marvel Comics and the martial arts genre. From his unconventional parents to his unique relationship with Marvel superheroes, here are 10 things you need to know about Shang-Chi.

Martial arts legend Bruce Lee is synonymous with kung fu. So, it’s not surprising that when Marvel artist Paul Gulacy first drew Shang-Chi back in 1974, he based his look off of the Enter the Dragon star. Thankfully, there wasn’t a bad side to choose from.

Interestingly, Marvel created Shang-Chi because they wanted to turn the TV show Kung Fu — which Bruce Lee auditioned for before David Carradine was cast — into a comic book.

Since Kung Fu was owned by Warner Bros., which owned Marvel’s rival company DC Comics, Marvel had to create their own Kung Fu-style story. So, in a way, Bruce Lee did end up starring in Marvel’s version. We love a wholesome origin story.

2. He’s half-Asian in the comics

Shang-Chi may be billed as the MCU’s first major Asian superhero, but his ethnic background is more complicated in the comics. While his father is indeed an Asian crime lord, Shang-Chi’s mother is a white American woman.

In Shang-Chi’s first appearance in Special Marvel Edition #15, his mother tells him that she was selected out of all the women in the world to be “the scientifically-perfect mother” of Shang-Chi. Which makes us wonder…was their courtship a really insane season of The Bachelor? 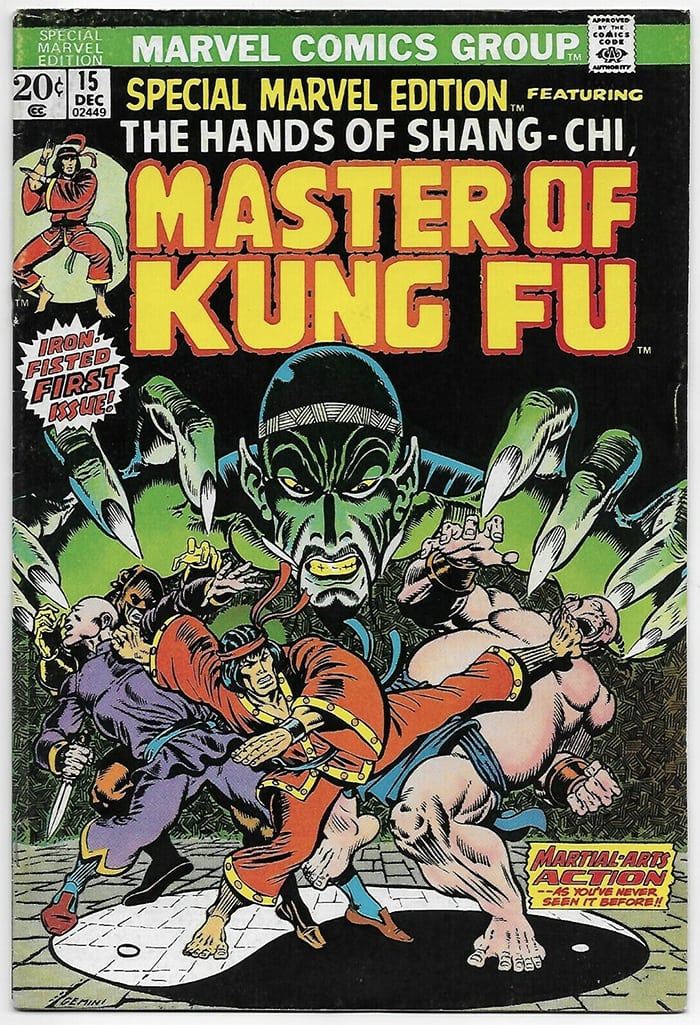 In the MCU film, Shang-Chi’s father, played by Tony Leung, is listed as Wenwu.

However, in the comics, Shang-Chi was originally supposed to be the son of Fu Manchu, an awful supervillain caricature of the Chinese who appeared in many non-Marvel novels and films. The character was such a racist depiction of Asians that Marvel retconned his identity and claimed “Fu Manchu” was just one of several aliases used by Shang-Chi’s criminal father.

4. He’s considered a criminal by many Marvel superheroes

Like Marvel’s Black Widow, Shang-Chi was raised to be a living weapon, although he later turned his back on his crime family. Talk about high-stakes family reunions. But in recent comics, Shang-Chi has become the new Supreme Commander of his family’s Five Weapons Society.

While he’s trying to reform the organization from the inside, a lot of superheroes, including Spider-Man and Wolverine, believe Shang-Chi has become a criminal, which makes many of his superhero team-ups awkward. Also, because he always forgets to bring dip.

5. He developed a brand-new martial art with Spider-Man

Speaking of Spider-Man, Shang-Chi once invented a new martial art called “The Way of the Spider” with Spidey. This happened when Peter Parker temporarily lost his spider-sense during Marvel Comics’ “Spider-Island” storyline. Puberty can really be tough on some people.

To compensate, Shang-Chi combined Spider-Man’s unique combat style with his own martial arts techniques. It helped, but once Peter’s spider-sense returned, he stopped practicing his new fighting style and let his skills slip. Exactly the same as us and drums.

The X-Men’s Wolverine is famous for his berserker rage. But in Wolverine: First Class #9, Shang-Chi revealed to Logan that his problem wasn’t anger — it was overthinking. Ok, we’re listening.

Showing Wolverine that when he stopped worrying about his animal nature, he was a much more effective fighter, Shang-Chi helped the mutant brawler gain a level of enlightenment. Do you think he tried Headspace, too? 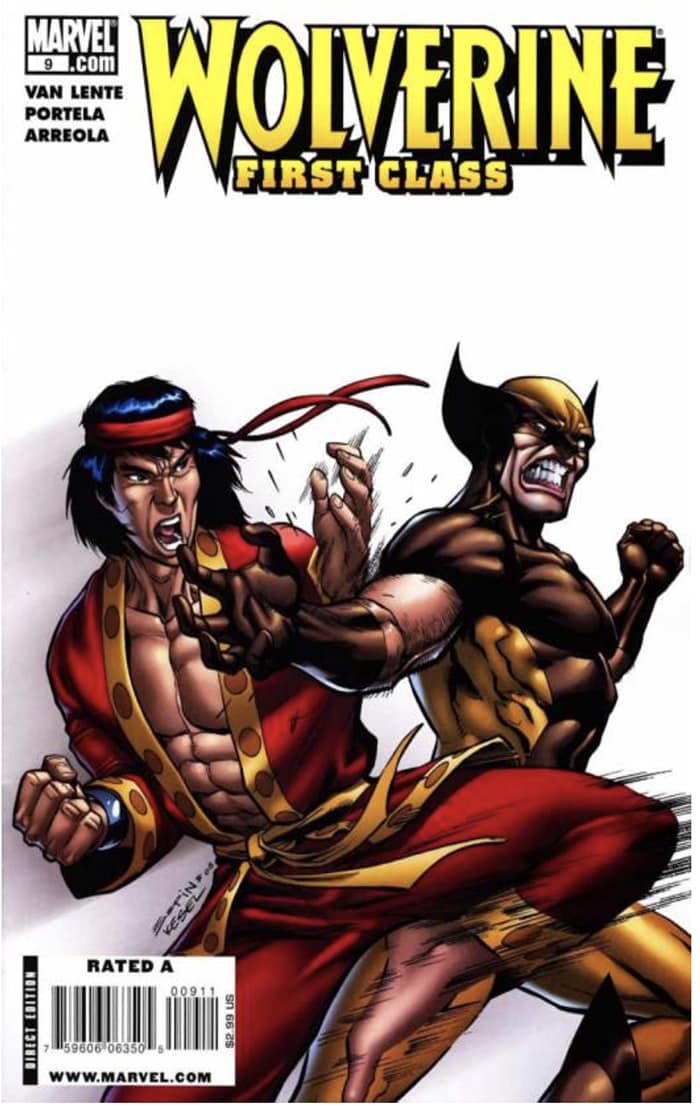 7.  He can outlast Captain America

Captain America is one of Marvel’s toughest superheroes with a working knowledge of basically every fighting style in existence. Still, even he has to push himself to keep up with Shang-Chi during their sparring matches. You don’t want to see them fight over the last jar of hair gel in the MCU community bathrooms.

8. He has no “real” superpowers

Shang-Chi may be a Marvel superhero, but strictly speaking, he doesn’t have superpowers. No Super Soldier Serum, radioactive spider bites or gamma exposure for this guy — he’s just been training a long time in martial arts. This makes us wonder what we’ll get from all our time scrolling TikTok.

Then again, Shang-Chi doesn’t really need superpowers. As the greatest kung fu master alive, Shang-Chi has held his own against superheroes, gamma mutated beings, and gods, including Ares, the Greek God of War.

He’s also been able to dodge, deflect, and catch bullets fired by machine guns. Shang-Chi can even give himself superhuman speed and strength just by focusing on his own chi. Is he available for lazer tag next week?

Living in the Marvel Universe gives you plenty of opportunities to gain superpowers, and Shang-Chi seems to gain — and lose — new ones on a regular basis. Superpowers, hair ties…it’s all the same.

During “Spider-Island,” he contracted a “Spider-Virus” and turned into a giant spider. While fighting with the Avengers, he used Pym Particles to grow to Giant Man’s size. And while hanging out with Iron Man, Shang-Chi received special Stark Tech, which came with repulsor-powered nunchaku. Unfortunately that didn’t also come with Tony Starks’ level of snark.

10. He could have been played by Bruce Lee’s son

We’re all excited to see Chinese-Canadian actor Simu Liu’s take on Shang-Chi — but if things had gone a little differently, we could have seen a very different Shang-Chi much earlier.

Way before the MCU was a thing, Stan Lee had a meeting with Bruce Lee’s son, Brandon, when Brandon was just getting started on his own acting career.

Unfortunately, it would be many years before Marvel movies became the entertainment juggernaut they are today. And tragically, Brandon Lee would die in an on-set accident playing the mystic superhero The Crow in 1994.

Latest posts by Michael Jung (see all)
As an Amazon Associate we earn from qualifying purchases. This post may contain affiliate links from Amazon and other sites that we collect a share of sales from.
96 shares