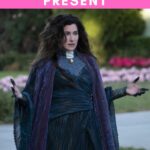 If you don’t live in a forest hut that stands on chicken legs, then you’ve probably noticed the witchcraft in the air. With reboots of our favorite 90s witches and new originals like WandaVision and its upcoming spinoff Agatha: Coven of Chaos, they’re having a bit of a moment.

But these ladies have been gracing our silver screens for well over half a century. Before that, they were enchanting us through regular ole spells. We really prefer ours with a side of entertainment, though, don’t you?

Here’s a look at some of the television’s most famous witches. Put on something black, grab the salt, and pick your next witch show to get lost in. 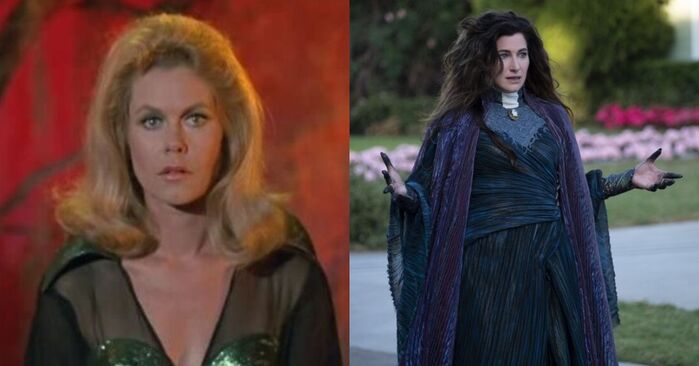 A History of Witches on Television

The sitcom Betwiched ran for eight seasons. It centers around the witch Samantha Stephens (Elizabeth Montgomery) as she tries her best to be a “normal” housewife to her husband, Darrin (Dick York).

Though she could easily do all of those wifely duties with her signature nose twitch, she promised her husband she’d no longer practice magic. And, suddenly it’s a very boring show. But, wait! She does practice magic. Bet you didn’t see that coming. 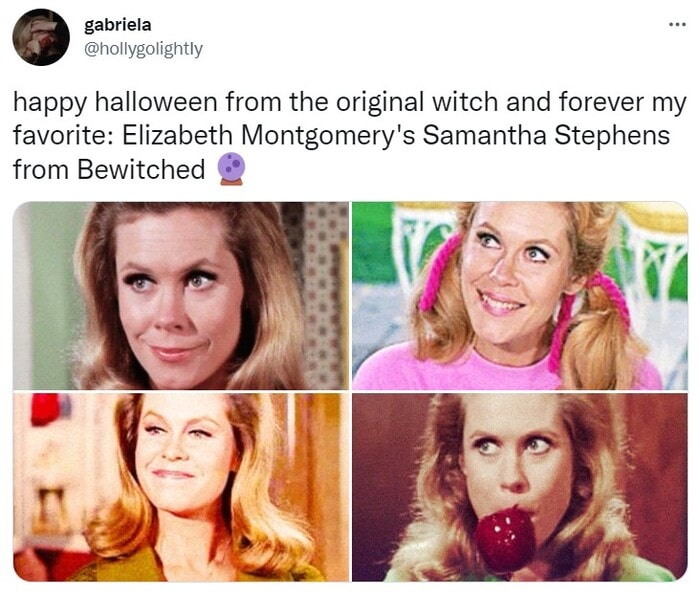 Only known as Grandmama, the witch in the Addams Family is Gomez’s mother and the grandmother of Pugsley and Wednesday. She’s somehow more eccentric than the rest of the kooky family.

This witch can often be seen casting spells, concocting potions, freaking people out at seances, and trying to get you to eat things that are still moving. Make sure to like and subscribe to catch next week’s YouTube episode: Curses! Starring the ghost of George Carlin. 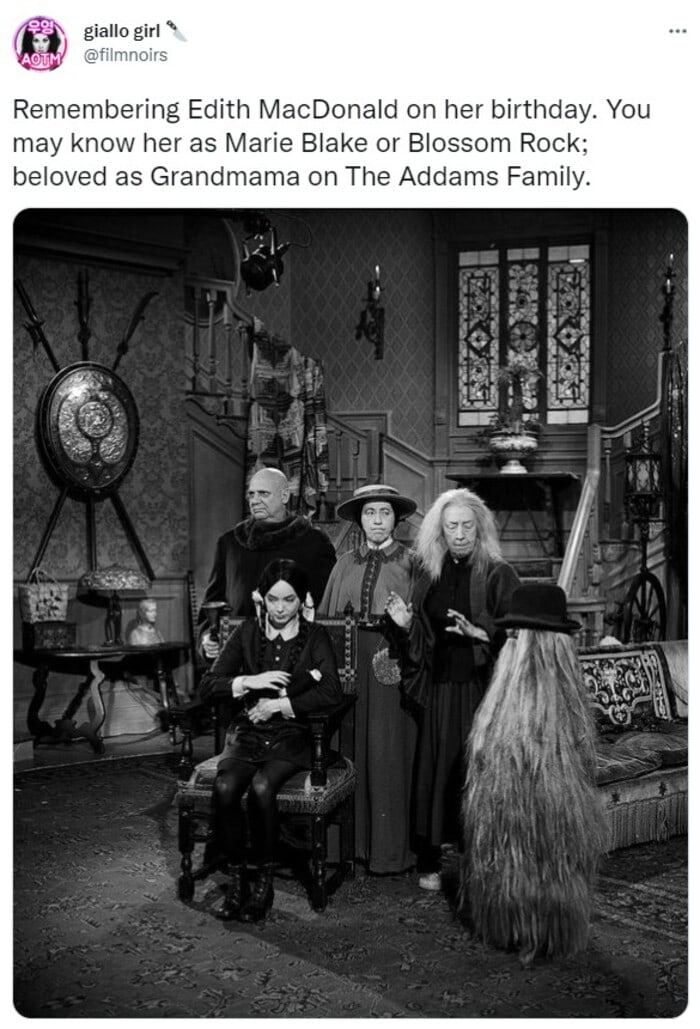 This teenage witch is known to turn people into pineapples, change outfits with a snap of her fingers, and converse with her cat Salem. We’ve only mastered one of these. As soon as we move these pineapples out of the way, we’ll let you know which one. 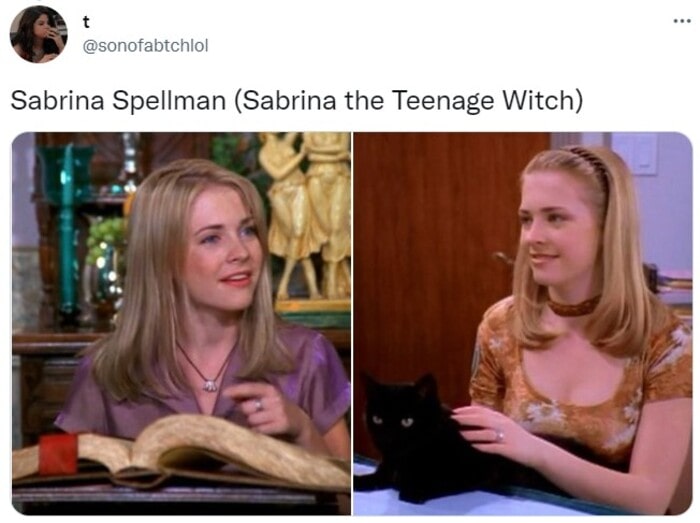 The show may have vampire in the title, but Buffy’s (Sarah Michelle Gellar) best friend and budding witch Willow Rosenberg (Alyson Hannigan) is just as important. Occasionally, Willow skirts the dark side, but she always finds her way back.

And that’s why it’s important to keep a compass in your bag at all times. 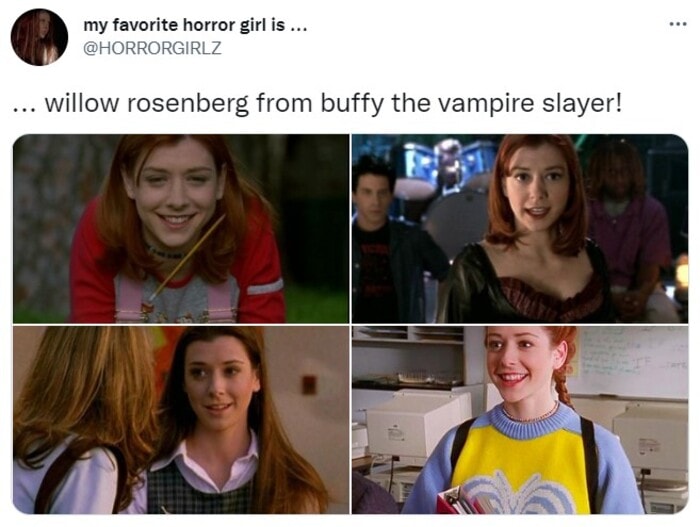 Anyway, the show was full of sisterly love, and demons. And sisters that date demons. You know how it goes. You’ve used Tinder.

20 years ago today, Piper and Phoebe were reunited with their sister Paige, and the Charmed Ones were reconstituted ❤️🔮 #Charmed #CharmedAgain pic.twitter.com/5yNzDyiy3m

One of Supernatural’s witches is Crowley’s mother, Rowena. She wasn’t added into the show until the last five seasons, but that’s ⅓ of the series. Fractions are our hidden magical talent.

This natural witch has no problem sacrificing others, displaying zero love for her son, and doing plenty of generally evil things. Like eating the last slice of pie. Seriously, who does that? 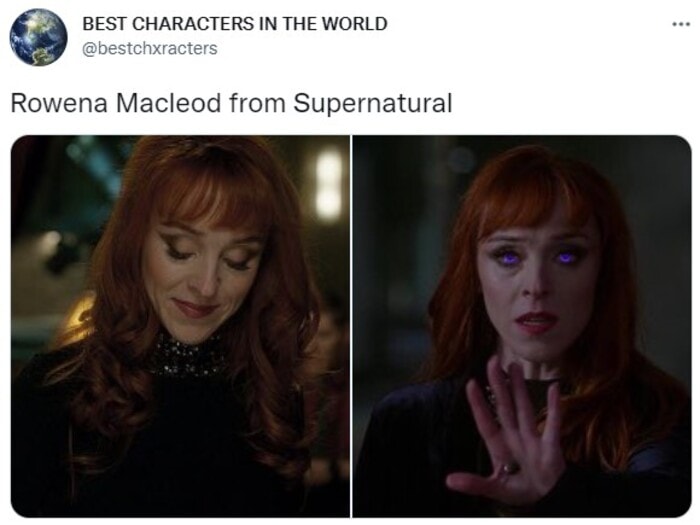 Bonnie is skilled in light and dark magic. This level-headed witch is also occasionally acts as an anchor to the “other side.” Maybe she can finally find out if the chicken or egg crossed first. 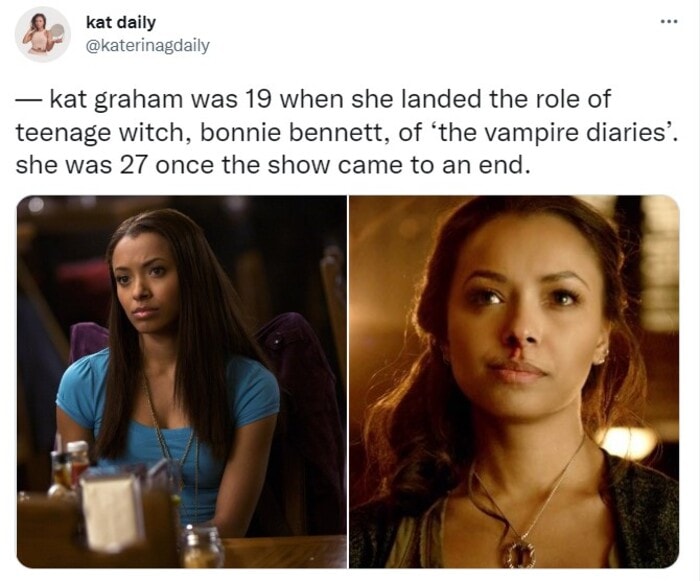 Anthology horror series American Horror Story’s season three is all about witches whose coven we would not like to join. Queenie (Gabourey Sidibe) is a descendant of Tituba, the first woman accused of witchcraft in the Salem Witch Trials.

She also has the ability to be a “human voodoo doll.” Maybe she can help us get a decent night’s sleep one of these days. 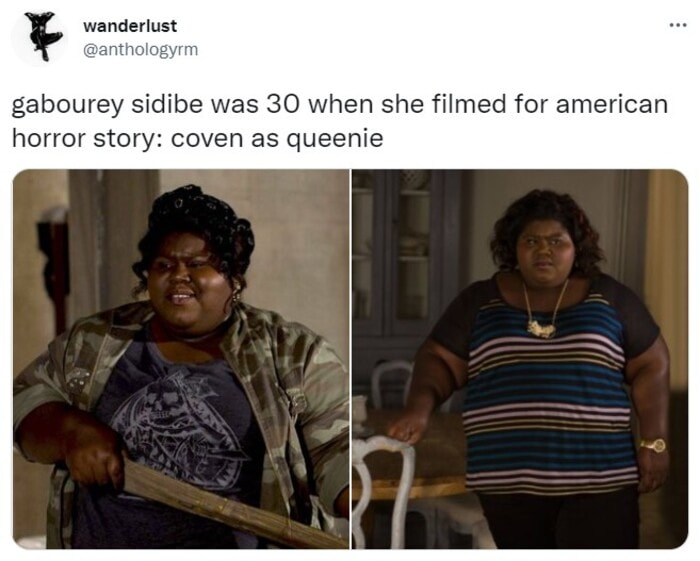 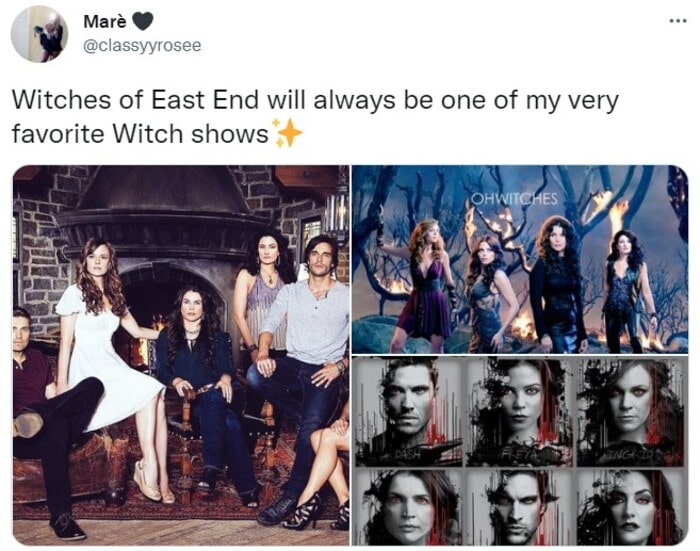 This supernatural horror series is loosely based on Salem’s 17th century witch trials. Mary Sibley (Janet Montgomery) is a powerful witch who exacerbates hysteria among the Puritans and plans to summon the Devil.

If he looks anything like Tom Ellis, we are happy to help. 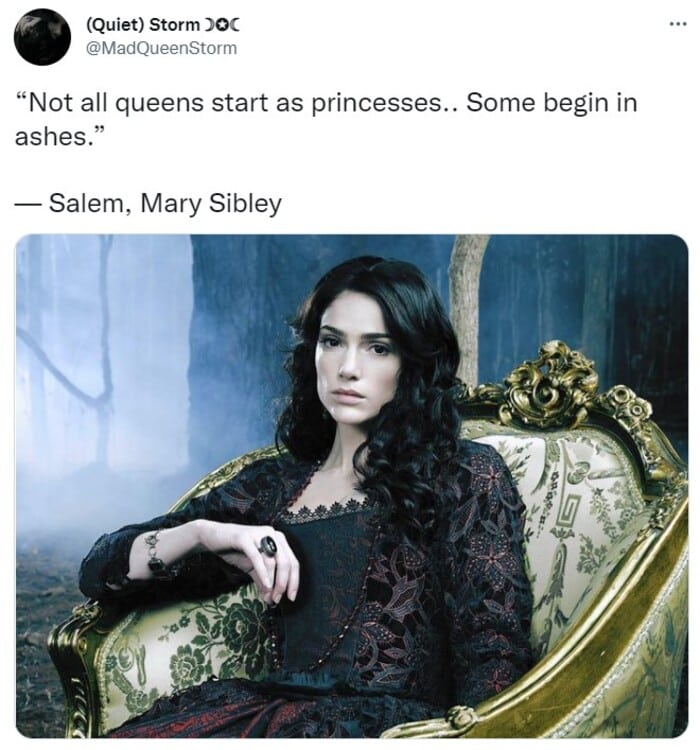 This revamp of Sabrina centers around the same family as the 90s version, but the show is more horror than camp. In this eerie Riverdale-adjacent version, Sabrina is a reluctant member of the Satan-worshiping Church of Night who ends up facing off against the Weird Sisters, Lilith, and trigonometry. 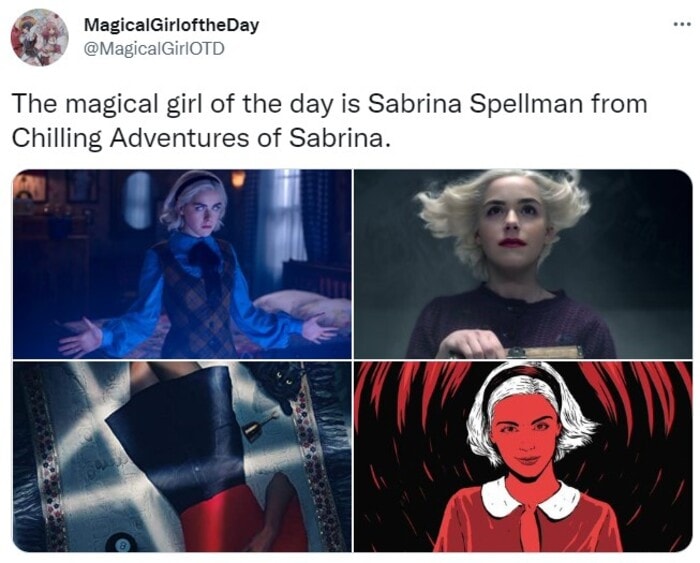 Based on the “All Souls” book trilogy, A Discovery of Witches follows historian and witch Diana Bishop as she discovers a lost manuscript and all the mysteries that come along with it. Like how print still manages to exist. 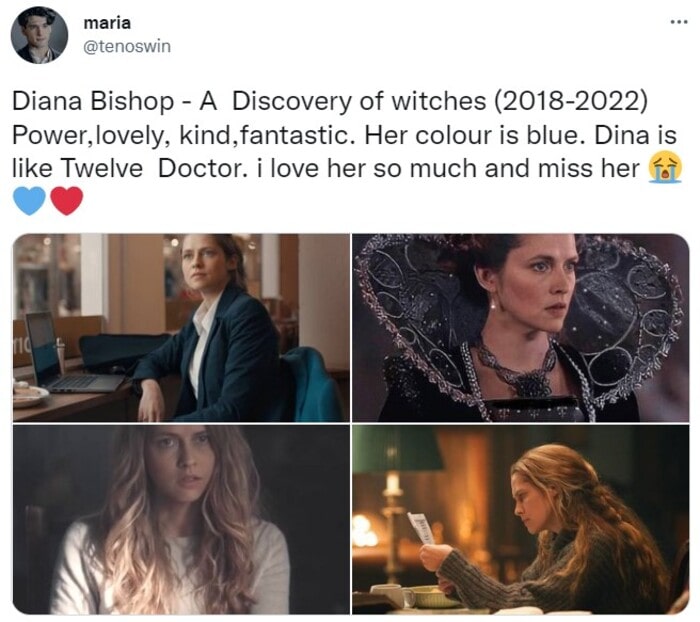 In the alternate universe of Motherland:Fort Salem, witches struck a deal to serve in the military in order to escape the Salem Witch Trials.

Sneak peek: and that's how the Bellweather Unit does a Windstrike.

The strongest Marvel hero, Scarlet Witch/Wanda Maximoff (Elizabeth Olsen), made it to the small screen with the Disney+ show WandaVision. That show follows her as she makes a nice suburban life with Vision and their two sons.

Except – spoiler alert – she’s created the entire scenario in her head and has the whole town under her control. Which is impressive and all, but her imagination skills could use some work. Main Street, USA, Wanda? You know Lake Como exists, right? 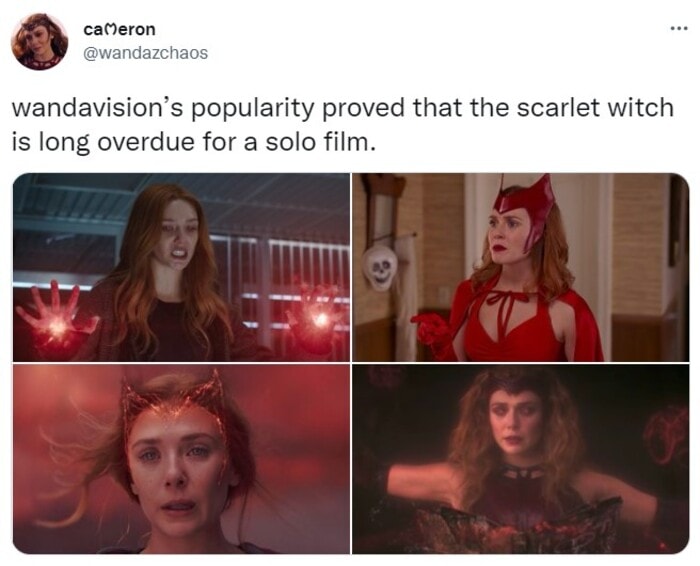 Details are scarce, but the upcoming WandaVision spin-off will focus on Agatha Harkness, Wanda’s next-door neighbor. Along with being that neighbor, she also can harness the power of the Darkhold, so best to keep your complaints about her off of NextDoor.

Latest posts by Ashley Hubbard (see all)
As an Amazon Associate we earn from qualifying purchases. This post may contain affiliate links from Amazon and other sites that we collect a share of sales from.
62 shares