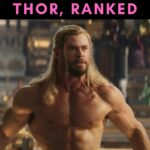 Move over, God of Thunder. It’s time for a goddess to take over. We’ve got a new Thor version to adore. Thor: Love and Thunder, which hits theaters on July 8, reintroduces Natalie Portman’s Jane Foster as Mighty Thor. This is what happens when you spend too much time fighting with your siblings.

In honor of the new movie, we’ve ranked some of the best versions of Thor in Marvel comic book history. But not by who is strongest or most powerful (yawn). We’re ranking by whether or not we’d kick these superheroes out of bed. Because, around here, we answer the tough questions. You’re welcome.

Red was a villain when he was introduced, but he became the adopted son of Odin and a hero in his own right and came to possess the power of Thor.

However, a big part of his storyline is his desire for Lady Sif. And every time she rejects him, he throws a temper tantrum. He does finally get over it, but it takes way too long. 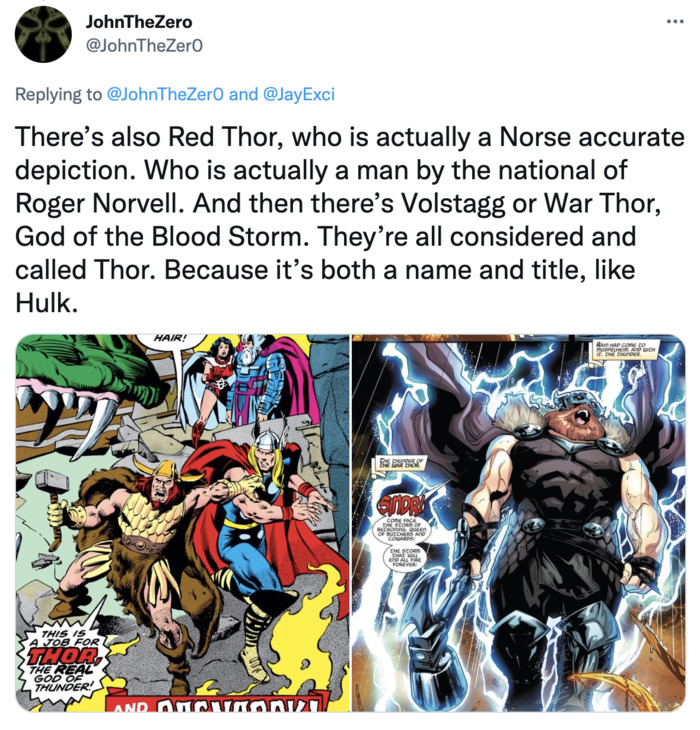 Even though Throg — once known as Puddlegup — was introduced back in the ‘80s, but MCU fans only recently (briefly) met him in Loki. Puddlegup was a human named Simon Walterson. After meeting Thor, he proves himself worthy and begins to wield his own hammer named Frogjolnir.

Sounds great, but we’re not down for having an actual frog in our bed, even if he has Asgardian powers. 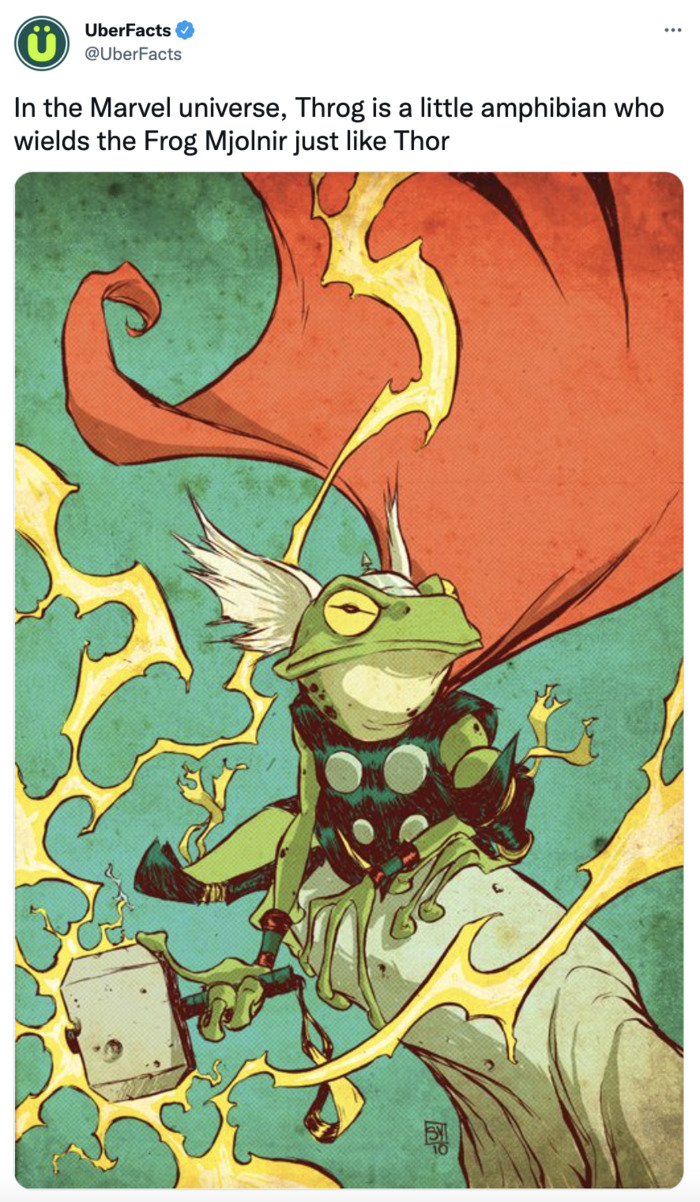 Beta Ray Bill may look scary, but he has one of the purest hearts of any of the Thor variants. And he may just make his MCU debut soon with rumors that Jane Foster isn’t the only new Thor in Love and Thunder.

It hurts us to put this fan-favorite character so low on the list, but we’re not sure we’d be able to get past the cybernetic horse head. We’re still scarred from The Godfather. 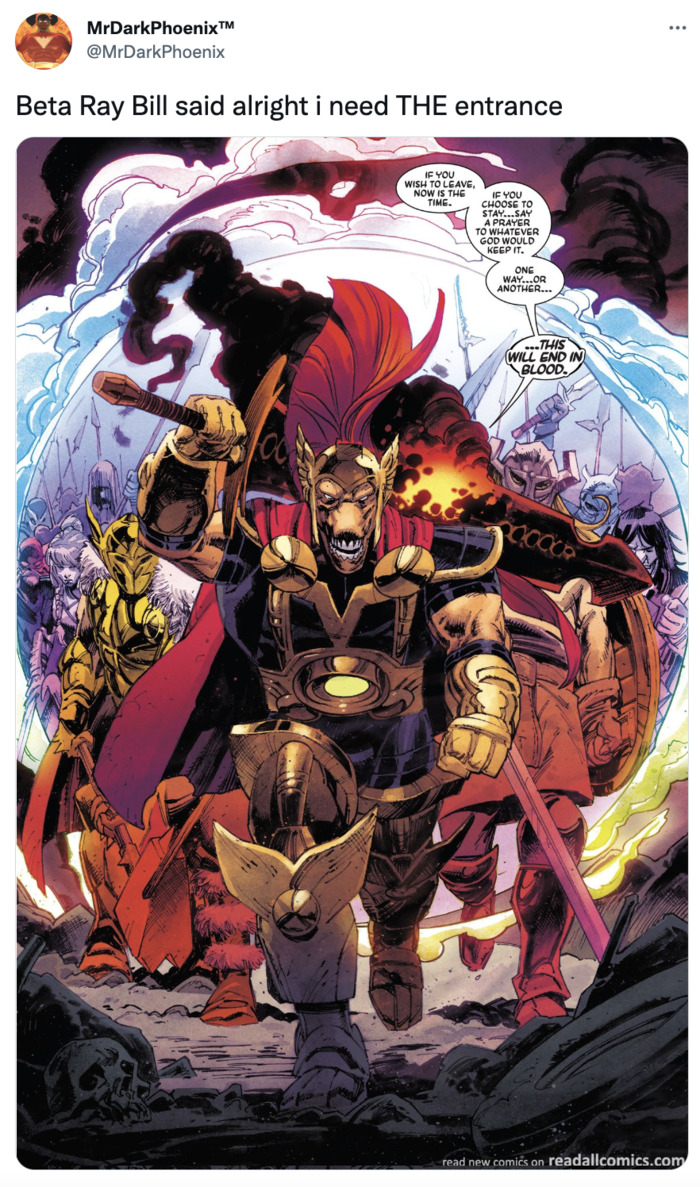 Ragnarök is no hero. He’s a villain and doesn’t even really have any agency of his own. He was originally a clone of Thor created by Iron Man to fight in the Civil War between pro- and anti-registration superheroes, and ends up being a pawn in the Skulls’ Secret Invasion.

Now, we’re not saying we don’t like a bad boy, but we prefer a bad boy who at least calls the shots. We’re tired of doing all the work.

In 2099, superheroes aren’t exactly beloved by the general public, and most of them have gone underground. You know, like The Incredibles.

But a new group of Norse gods, the Aesir, come to Earth and are worshiped by the Church of Thor. A cleric of the church, Cecil McAdam, becomes the new Thor variant.

Turns out, the new Thor and the rest of the Aesir were created by the evil company Alchemax, the Vought Industries of 2099 as a way to distract the people from the company’s sinister dealings.

Thor 2099 isn’t much of a hero, but he thinks he is. He probably thinks he also just got us off. Out of our bed. Now. 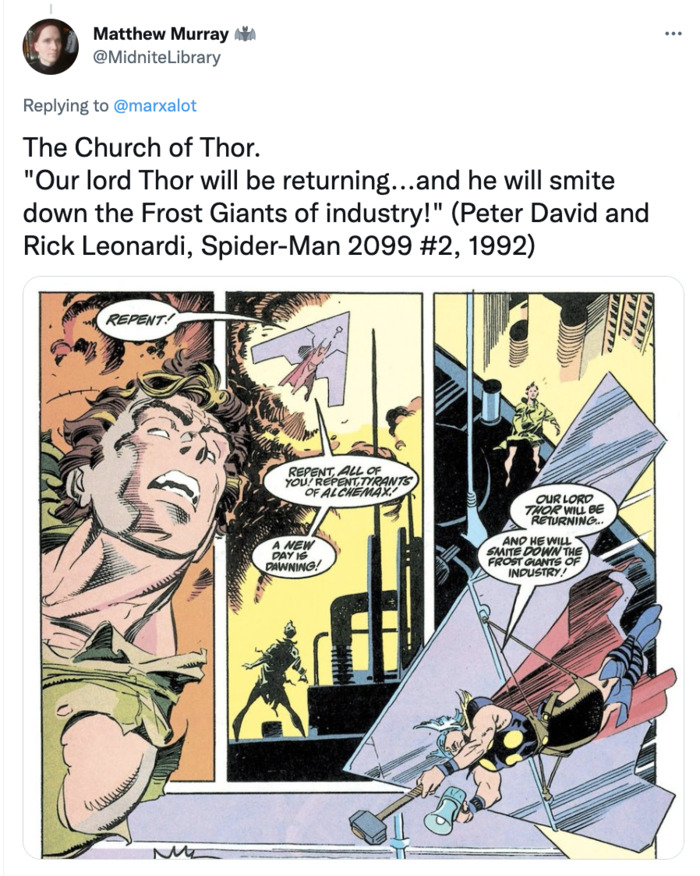 When Thor becomes King Thor, he essentially becomes Odin 2.0. And a cynical, bitter old man just doesn’t give us the zaddy vibes we were hoping for. 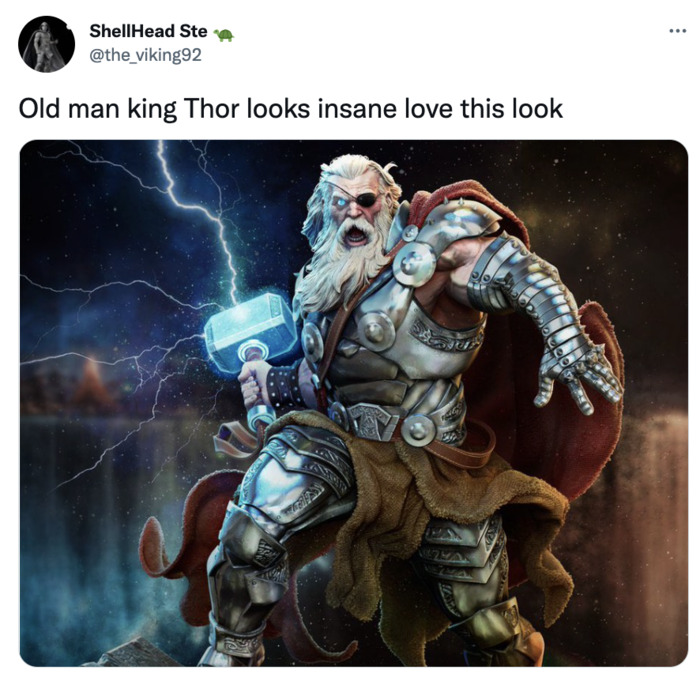 When Gamora created the Warp World in the Soul Gem, she essentially merged every soul with another, resulting in a hybrid of Thor and Iron Man. He follows a similar path in life as the OG Thor, just with a rich CEO spin.

Sure Iron Hammer is powerful, but he’s also got both the arrogance of both Thor and Iron Man. Confidence is hot. This hot mess? Yeah, we’re good. He sounds like the kind of lover that sets up a mirror on the ceiling just to watch himself in action. 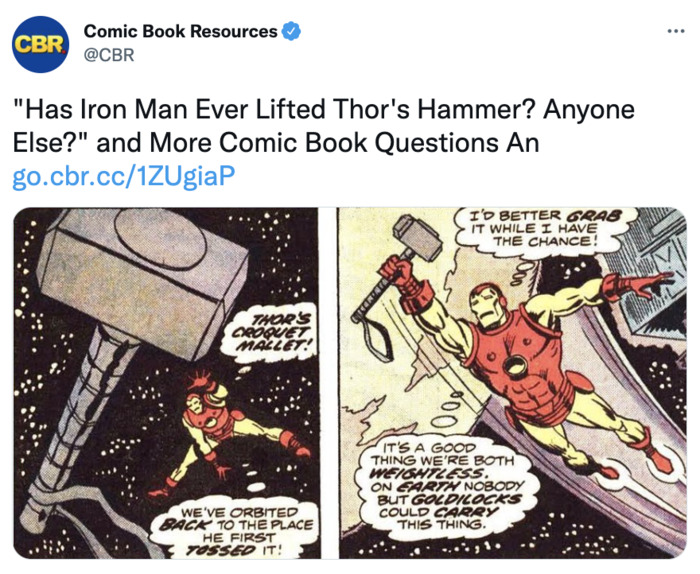 Ultimate Thor is a reincarnated version named Thorlief Golmen with all of the god’s attributes turned up to eleven. And that includes the not-so-great ones.

He’s even more unpredictable than the normal version, which would probably be fun in the bedroom. But in the end, unpredictability plus the powers of a god might result in some not-to-fun injuries, so we’re going to pass. 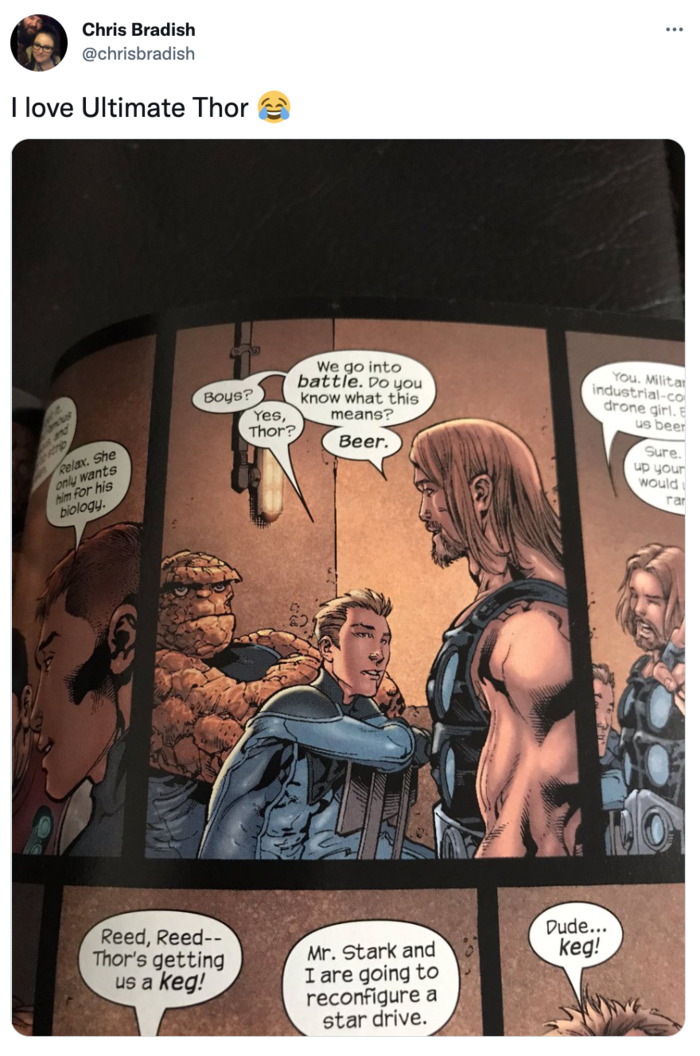 Though he would later take on the mantle of Thunderstrike, Eric Masterson joined the world of superheroes as a version of Thor. He’s widely considered to have one of the most tragic Thor storylines, which is saying something considering Asgard has been destroyed multiple times.

In an effort to protect his son from superhero life, he gives up his relationship with him to keep him safe. Spoiler Alert: It doesn’t work. And the kid grows up resenting dear ol’ dad.

Eric comes with a lot of baggage. And, while we’re all about being a supportive partner, he needs to go to therapy and do some self reflection work first. After that, he’s welcome to wield his hammer in our bed. 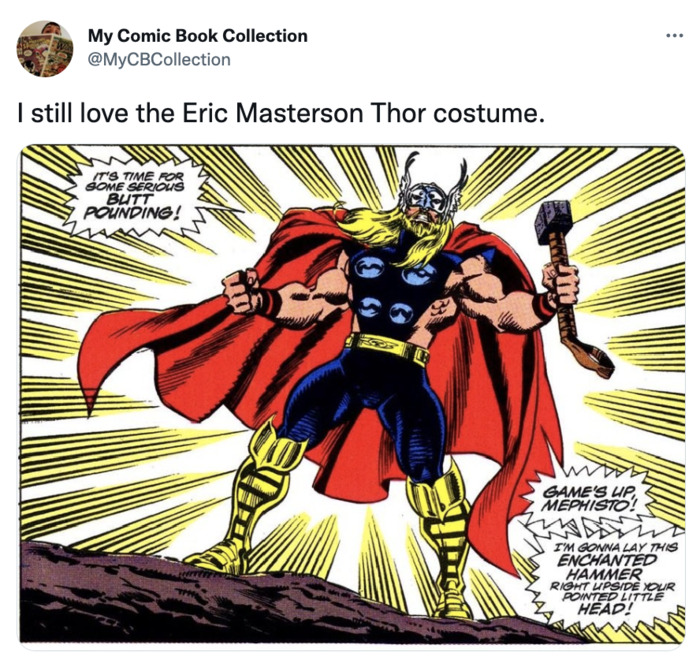 When Asgard’s Volstagg took up the Thor mantle, he became War Thor, one of the most brutal versions of the character. War Thor is on a bloodthirsty quest for vengeance. It’s only when Jane Foster reaches through to Volstagg is he able to realize he needs to work through his trauma and stop his rage.

We’d kick War Thor out of bed, but Volstagg can stay. 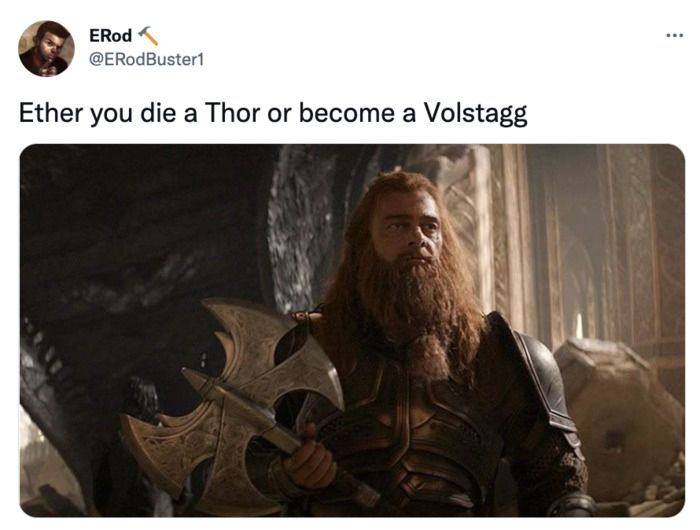 When Thor’s trademark arrogance gets him into trouble, Odin sends him to Earth as Donald Blake, who has no memory of his true life. When he regains his memory and learns that he is indeed a powerful cosmic being, his love of humanity causes him to become a defender of both Asgard and Earth.

Though his story changed somewhat for the screen, Chris Hemsworth has been portraying him in the MCU since 2011. We wouldn’t kick him out of bed. Unless Tom Hiddleston’s Loki propositioned us instead. 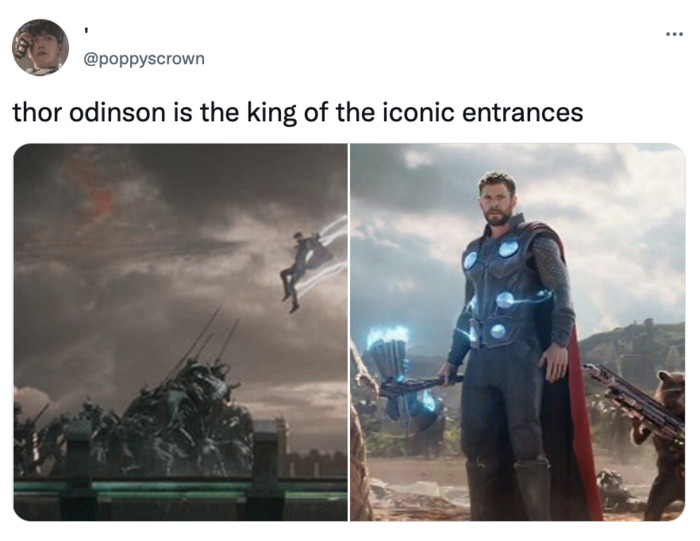 Jane Foster is far more than a love interest for Thor. She becomes a version of Thor in her own right. While dying, she ends up taking on the powers of Thor, filling the space left by a who can no longer use Mjolnir.

Despite the pain she experiences in her human form, she continues to fight for good and protect the universe. Jane is welcome in our bed anytime, and you better believe we’d treat her like the queen she is. 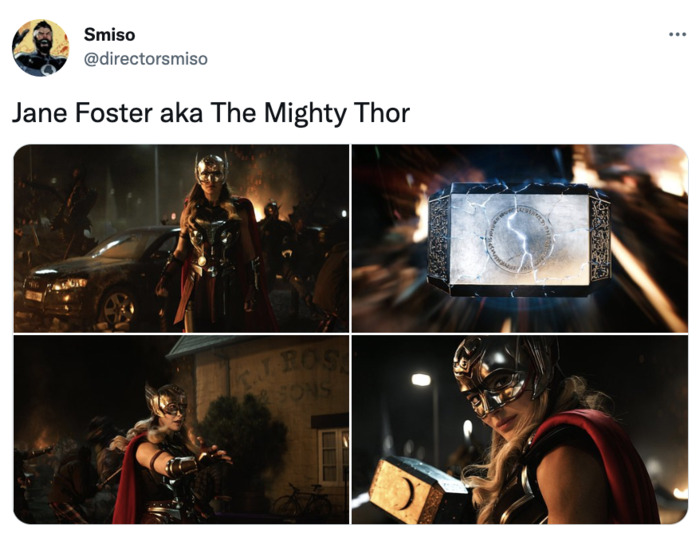 In The Unworthy Thor, Thor loses the ability to wield Mjolnir because he comes to believe that all gods are no longer worthy of the admiration they receive. But in his steadfast belief, he becomes far more worthy of admiration than he’s ever been. He continues to fight for what’s right, even without the powers he once had.

He becomes known as Odinson for a time, bequeathing his Thor name on Jane Foster instead. His trademark Thor arrogance is humbled, and we just know this man would be a sensitive, passionate lover.

Don’t know how exactly they will do the Jane Foster Thor storyline, but man I hope they don’t make Odinson unworthy right after Endgame. pic.twitter.com/01jH6RD2uG

Latest posts by Jacqueline Gualtieri (see all)
As an Amazon Associate we earn from qualifying purchases. This post may contain affiliate links from Amazon and other sites that we collect a share of sales from.
2 shares