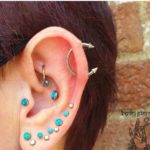 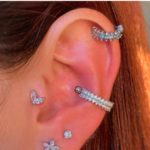 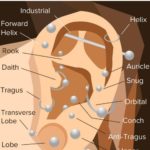 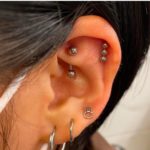 Cartilage ear piercings are one of the most fun things you can do with needles, second perhaps only to tattoos and cross stitch. And there are at least 10 types of ear piercings to choose from. We realize those numbers don’t hold a candle to all the cityscapes you can find on Etsy, but at least these won’t languish in the back of your closet.

According to Broseph, a professional piercer at Atomic Tattoo & Body Piercing in Los Angeles, piercings like the conch, rook and daith are now just as popular as helix piercings. What’s driving their popularity? Celebrities of course! Healing and pain levels vary from a few weeks to a few months and not bad to excruciating depending on what piercing you’re getting.

If you’re worried about the pain factor keep in mind that “it takes you longer to fill out the paperwork,” says Broseph. What you should be worried about is piercing aftercare and most importantly, not touching it.

So, if you’re thinking about getting one, and want to know all the details, behold this handy guide. Go forth, adventurer. And remember, never go to the mall to get pierced.

Is this an intimidating number and placement of piercings? Yes. Yes, it is. But you’ll soon learn the differences between all of these piercing types.

The 12 Common Types of Ear Piercings

Ah, the good ‘ol lobe piercing. The one that if you went to the mall to get a piercing it was probably this one. It’s one of the most common types of ear piercings. It’s also lowest on the pain scale and takes a mere six to eight weeks to heal. As you start to add more to create a constellation piercing, they will hurt more. Like each time you learn the hard way not to date Geminis.

A helix piercing is any cartilage piercing around the outer edge of the ear. It’s a great way to “dip your toes in the water” of cartilage piercings, to get a sense of things since the pain level is around a 5 out of 10 and healing takes four to six months. You can even go double or triple with your helix, like a delicious fudge sundae or Tonya Harding at the 1991 World Figure Skating Championships.

A forward helix is similar to a helix in that it’s done in the cartilage at the top of the ear. But, it’s located in the very front (or forward part) of the ear and, once healed, most people insert studs instead of hoops or rings. Expect a healing time of around six to twelve months. The pain for a single forward helix is relatively low. As you step it with a double or triple helix (two or three piercings), the pain level ramps up too.

A flat piercing is located in the top portion of your ear and just inward from the helix. It hurts about as much as a helix and takes 4 to 6 months to heal. That flat part of the ear makes a great canvas for single, double, or triple piercings featuring your stud or studs of choice. Speaking of, where is Adam Driver these days?

An industrial piercing is also known as a barbell or scaffold piercing and often connects one part of the ear with another. One common variation of the industrial uses a barbell to connect a helix to a forward helix.

This piercing hurts more than the helix, and according to Broseph, introduces the possibility for more pain and irritation. “If you bump one side, the other side’s going to feel the same irritation.” Our inner klutz means this one is a thumbs down, but if it sounds right for you, factor in a longer healing time lasting between four and twelve months. And, think of all the teeny-tiny ornaments you can hang from it once it’s healed!

An orbital is “like an industrial but instead of using a barbell that goes through the ear, you use a hoop,” according to Broseph. Your piercer will pierce your lobe in two places and connect these with a ring. It hurts just slightly more than a helix but the healing time is about the same (around 4 to 6 months).

The rook piercing is located below the top part of the helix at the top of the inner curve of your ear. It hurts a bit more than a helix, has a healing time of four to six months, and should not be confused with the chess piece or the “most abundant Eurasian bird of the crow family.” Even if yours won’t stop yelling nevermore. We told you not to get a talking captive bead ring.

Follow the inner curve where the rook is located to the center of the ear and you get the snug. Think of it as a hug for the inner cartilage of your ear. Except a hug that hurts like the Dickens and takes four to six months to heal. Kind of like that weird dream you had about the Ghost of Christmas Past you keep talking to your therapist about.

A daith piercing is located on the cartilage fold just below the forward helix. They hurt slightly more to get than a helix, and have the same healing time of four to six months. Most people wear a captive bead ring in their daith piercing, so if your favorite form of punctuation is the parentheses, this might be the piercing for you. More of an interrobang fan? Go for the industrial‽

The tragus is that sexy bit of cartilage that stands guard over the ear canal. Tragus piercings are usually styled with a single stud and take four to six months to heal, but are more on the painful side and may take a second longer as there’s more cartilage for the needle to go through.

The anti-tragus is located in the cartilage across from the tragus, above the lobe and hurts about as much as the tragus (which some say is the most painful piercing they’ve ever gotten). It also takes the same amount of time to heal. Fun fact: Tragus comes from the Ancient Greek word trágos meaning “he goat.” Show those hoofed mammals who’s boss with your anti-tragus.

Have you ever looked at your ear and thought, “Hmm, it reminds me of a seashell.” The conch piercing is located is in the “bowl of your ear.” It hurts about the same as a helix and has a similar healing time. It’s also one of Broseph’s favorites because of the creative possibilities:

“I really like those more than anything. They’re fun to do and you [can] get very creative with the jewelry and the positioning.” Yeah, we’re going straight Ariel with this one and don’t care what Sebastian has to say about it.

Latest posts by Maylin Tu (see all)
As an Amazon Associate we earn from qualifying purchases. This post may contain affiliate links from Amazon and other sites that we collect a share of sales from.
5.8K shares