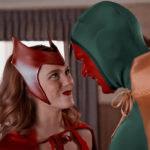 We’re pretty excited about WandaVision premiering on Disney+ so we threw together some fun facts and trivia you can read when you’re supposed to be working. 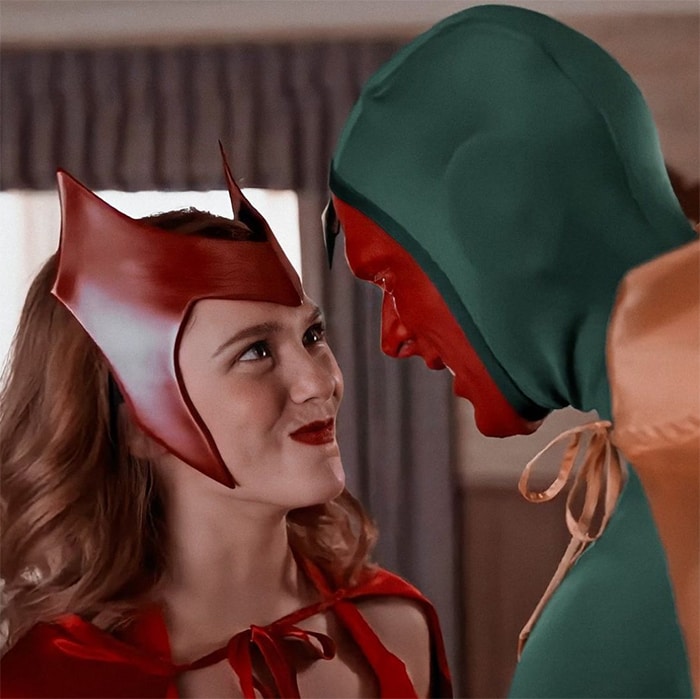 Don’t worry if you’re unfamiliar with the Marvel Cinematic Universe (MCU), Wanda, Vision, or which timeline we’re currently in — no one else really knows what’s going on, either. That said, there are possible spoilers ahead — but only if you’ve been avoiding all media since Avengers: Endgame. In which case please take us to the rock you’ve been hiding under, as we’d like to go to there. Just bring Chris Evans.

Marvel verified that WandaVision transpires after the events of Avengers: Endgame. They also confirmed it’s canon – so completists will have to watch it and the rest of us will have to deal with the annoying question, How is Vision alive?

At the end of Avengers: Infinity War, baddy Thanos ends Vision to get his Infinity Stone — and that’s after Wanda (Vision’s girlfriend) destroys Vision in an attempt to save the universe. Please don’t make us explain this.

Wanda, then, goes *poof* when Thanos snaps half the universe’s population into non-existence. Sure, she comes back to a very boring approximation of life along with everybody else, but unless we missed a post-credits scene that takes place several hours after the cinema closes, Vision didn’t. So… hey buddy, how’d you get here again?

Just like in the movies, Mary Kate & Ashley Olsen’s less twin-y sister Elizabeth plays Scarlet Witch. Elizabeth didn’t begin acting until 22, after growing up in the dis-proportionality large shadows of her petite child-star sisters. She avoided the spotlight — until suddenly she didn’t.

3. In the Marvel comics, Scarlet Witch and Vision are a lasting couple

Forget Cyclops and Jean Grey — Wanda and Vision are one of the most enduring relationships in the comic books. And regardless of their on-again, off-again status, they manage to do a bunch of coupley stuff, like get married, have children, and, um, more.

4. Scarlet Witch is one of Marvel’s most powerful characters

Like Vision, Wanda’s powers originated from the Mind Stone. Initially, she could perform telekinesis and plant psychic visions into people’s minds. As her powers grew, she became able to manipulate her energy and levitate, emit psychic energy blasts, and create force fields. But what makes her really impressive — and likely what WandaVision hinges on — is her ability to alter reality itself.

5. Kat Dennings returns to the MCU in WandaVision

Dennings joined the MCU in 2011’s Thor as Jane Foster’s quick-witted assistant Darcy Lewis. She appeared again in Thor: The Dark World and then went off to do derivative sitcoms.

But, she’s back in WandaVision — and may even have a decent-sized part. We’re pretty excited because both Dennings and her character Lewis are about as sarcastic as we were in high school, back when being sarcastic was cool and not considered a character defect.

6. WandaVision kicks off phase four of the MCU

You might ask, “What the heck are MCU phases?” Sigh.

The MCU kicked off with Iron Man in 2008. 13 years and more than 20 films later, here we are. The series of movies is divided into distinct sections — “phases” — with overlapping storylines. Just make sure you get off by 54th Street or you’ll end up in the Spider-Man and His Amazing Friends multiverse.

7. You can watch WandaVision without having seen the movies

Don’t worry that you won’t understand a thing if you accidentally hit “play” on WandaVision. You may still be able to enjoy it without knowing anything about the greater MCU. And you may even learn something about yourself. JK, it’s a comic book show.

With that said, if you really want to get Wanda and Vision’s backstory, watch these movies: Avengers: Age of Ultron, Captain America: Civil War, Avengers: Infinity War, and Avengers: Endgame. Given that these, like WandaVision, are all on Disney+, it’s not like it’ll cost you more than a few weekends to get up to speed.

Maybe we’ve been stuck inside too long, or maybe we’re bored of Flirty Emoji Pro, but we’re pretty hyped about Disney’s release of its Twitter emojis for the show. Type any of these hashtags and they’ll appear — like magic: #WandaVision #Wanda #TheVision #WandaMaximoff.

9. Scarlet Witch is an actual witch

She isn’t called “Witch” because she wears black, red, and seems like she’d be into being thrown into a lake. Nope, Wanda is an actual witch. Wanda was ordained with magical powers as a baby in the Wundagore mountains and received official magical training under a witch named Agatha Harkness. If you’re getting her a gift, we recommend one of these.

10. Elizabeth Olsen helped choreograph some of her fight scenes

The Scarlet Witch’s fight scenes are pretty cool — in part, thanks to Olsen. She helped choreograph them by working with Jenny White, a British dancer, and learned to isolate specific finger movements that would appear “magical.”

11. WandaVision is going to be unlike any other Marvel movie or show

The presentation of WandaVision is out of character for the MCU. Which, despite the flying superheroes and talking trees and trips to mythical Norse sky kingdoms, is rooted in relatively specific places and times. WandaVision is likely to transcend or bend the rules of the MCU’s reality.

Hence the appearance of characters (at least one of whom should totally be gone forever) existing in different sitcom eras, from black and white I Love Lucy-style to a Brady Bunch-esque world to something relatively modern with an Office feel. 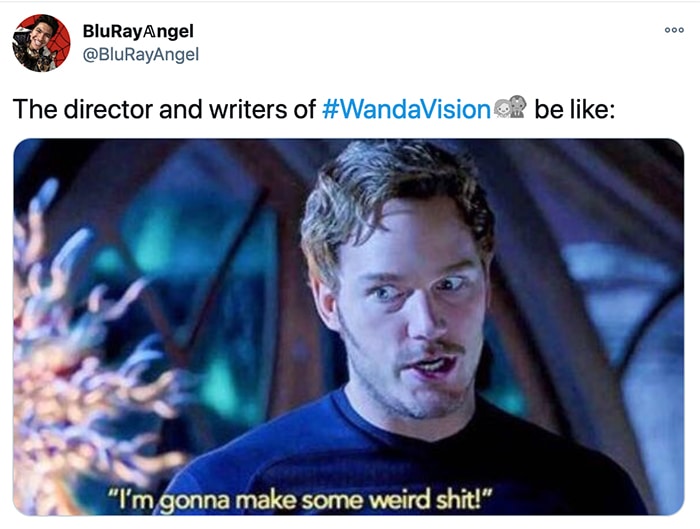 Latest posts by Ashley Hubbard (see all)
As an Amazon Associate we earn from qualifying purchases. This post may contain affiliate links from Amazon and other sites that we collect a share of sales from.
9.1K shares