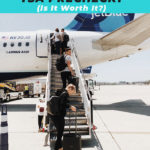 The last time we have $85 dollars lying around we bought all of the cactus-shaped margarita glasses at the Dollar Store. If we had another $85 dollars, we’d do the same thing. They’re so cute!

Since there aren’t any left, we recommend you use your spare $85 to get TSA PreCheck.

What is TSA PreCheck?

TSA PreCheck is a U.S. based program that allows trusted travelers to pass through an expedited airport security screening without having to remove your shoes or take anything out of your carry-on bag for five years. Coincidentally, that’s how long it took us to unpack from our last trip.

While everyone else in the regular security line has to take off random articles of clothing — we learned the hard way it’s not that kind of party — and remove half of their belongings from their bags, having TSA PreCheck means you get a special line and don’t have to remove your:

You do have to remove the bottle of vodka. Whether or not you chug it before going through security is on you.

Need a great carry-on? These are 8 of our favorites.

Ok, That Sounds Pretty Great. Am I Eligible for TSA PreCheck?

TSA PreCheck is available to those who meet the following initial criteria:

Sorry, Russian spy readers. That means you shouldn’t get PreCheck. Also, if you were actually considering it, you’re the worst spy ever. Did our boss hire you?

How Can I Get TSA PreCheck?

First you’ll need to complete and submit your PreCheck application online on the TSA’s website.

You’ll include the typical information such as name, address, citizenship, date of birth, social security number, and what star sign you’re not compatible with. Just kidding. Everyone knows it’s Gemini.

But because we’re not the government and we want to make things easy for you, here’s a step-by-step guide on how to do this.

Fill out the application correctly and honestly. Now is not the time for jokes. Put in your real phone number, not that fake one you give out at the bar, “Emily.” 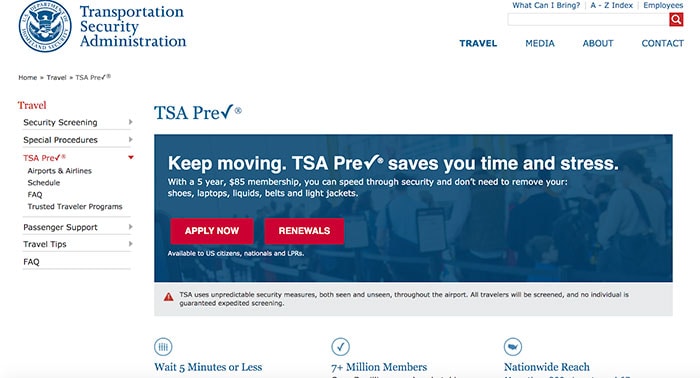 Set aside up to an hour in your schedule for the interview so you have enough time to park, wait if they’re running behind, and do the actual interview. Make sure to bring proof of citizenship, like your passport or a photo ID and your birth certificate.

The appointment isn’t like a job interview. The questions are pretty easy — mostly about your travel habits and why you want PreCheck. And they’ll take your fingerprints, so now is the time to stop committing crimes or, at the very least, start wearing gloves. 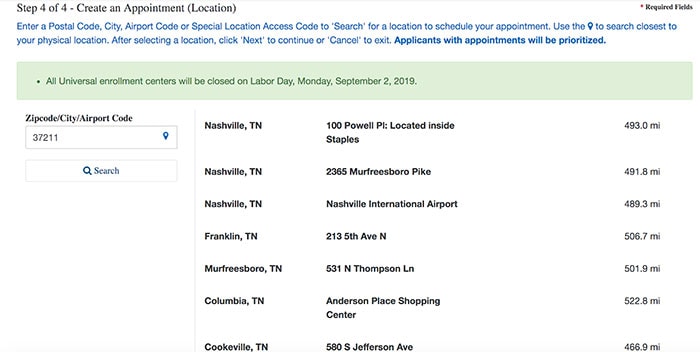 It generally takes two to three weeks for the TSA to approve or deny your application. If you’re approved, they’ll send your status via both email and mail, and it will include your Known Traveler number.

Use your Known Traveler number when you buy tickets, so the airline knows you’re a PreCheck member, and hopefully makes a note in their system to have extra tequila on board for you. (If you’re giving them your social security number, they should at least learn your drink order, right?) If they forget to add it, go to the check-in counter and ask for it to be added to your ticket.

Bypass the unwashed masses in the normal security line. Remember to wave!

How Much Is TSA PreCheck? Do Any Credit Cards Reimburse It?

The non-refundable application fee for TSA PreCheck is $85 for five years.

While 85 bucks is a pretty good deal, it’s still money you can’t spend on cactus glasses. Thankfully there are some credit cards that reimburse the fee for TSA PreCheck or Global Entry.

How Do I Use TSA PreCheck?

When booking your flight, there will be a spot on the reservation to input your nine-digit Known Traveler Number (or KTN). If you’re able to do this at the time of booking, then you should be good to go.

If you get your PreCheck approval after booking your ticket or you forget to input your KTN when you buy your tickets, you can add it later by editing your reservation details or by calling the airline. Make sure to do this before check-in though.

If I Sign Up for TSA PreCheck, Will I Always Get It?

Not always. Not every airport or airline provides it. And sometimes, the PreCheck line is closed. This is usually at low-traffic times, but it still means you may occasionally make the TSA jealous by showing off your sloth socks.

Why Don’t All Airports and Airlines Have TSA PreCheck?

Who knows? Why does Panera run out of bread bowls sometimes? Why does it rain? Some things just can’t be explained.

However, TSA PreCheck is available in 200+ airports and it’s covered by 67 airlines — so there’s a pretty good chance the airport you’re at and the airline you’re flying uses it.

Airlines That Have Adopted TSA PreCheck

No, TSA PreCheck does not work overseas, so it is only beneficial on flights that originate in the U.S. If you’re traveling out of the country, PreCheck will work for your outbound flight, but it won’t get you through customs any faster, and it will be of no use when returning to the country.

Which is Better: TSA PreCheck or Global Entry, NEXUS or SENTRI?

If you travel internationally and hate lines, you may want to consider one of the other three trusted traveler programs — Global Entry, NEXUS, and SENTRI — to expedite your way through Customs and Border Protection (CBP).

Each program offers all of the benefits of PreCheck plus more. Unfortunately “more” doesn’t include free kittens, no matter how many times we suggest it to their customer service department. More like a PASS ID number instead of a KTN, and less time between deboarding and getting into your Uber.

One catch: None of these programs work when you’re going through customs in a country outside of North America.

Global Entry is administered by the U.S. Customs and Border Protection, costs $100, and lasts for five years. The application is done online, requires a more thorough in-person interview, and the overall process can take several months as opposed to weeks. But your patience pays off the first time you breeze past the customs line at LAX after getting off a red-eye.

Are you a fan of Canada? Who isn’t? They’ve got maple syrup, Ryan Reynolds, and sub-zero temperatures.

If you’re nostalgic for the days when you could enter Canada without a passport, apply for NEXUS. You’ll typically get all the benefits of PreCheck, plus expedited entry on both sides when traveling between the U.S. and Canada — yet it’s only $50. Apparently this is just one of those things Canada does better than everyone, like curling, or apologizing.

Apply online, attend an in-person interview at an enrollment center in the northeastern U.S., and then travel to a participating Canadian airport to have your iris scanned. Yes, that’s a lot of effort, but 100% worth it for expedited access to Tim Hortons honey crullers.

On the flip side, literally, SENTRI offers similar benefits on the southern border. Like NEXUS, SENTRI typically includes PreCheck benefits, along with expedited border crossings when coming into the U.S. from Mexico and Canada.

If you’re a fan of Mexico and all it has to offer — including but not limited to Tulum, Mexico City’s Dia De Los Muertos festival, and lots of tequila — you may want to consider SENTRI.

The SENTRI application is online, the application fee is $122.25, and you’ll need to attend an in-person interview at an enrollment center in Arizona, California, New Mexico, or Texas. 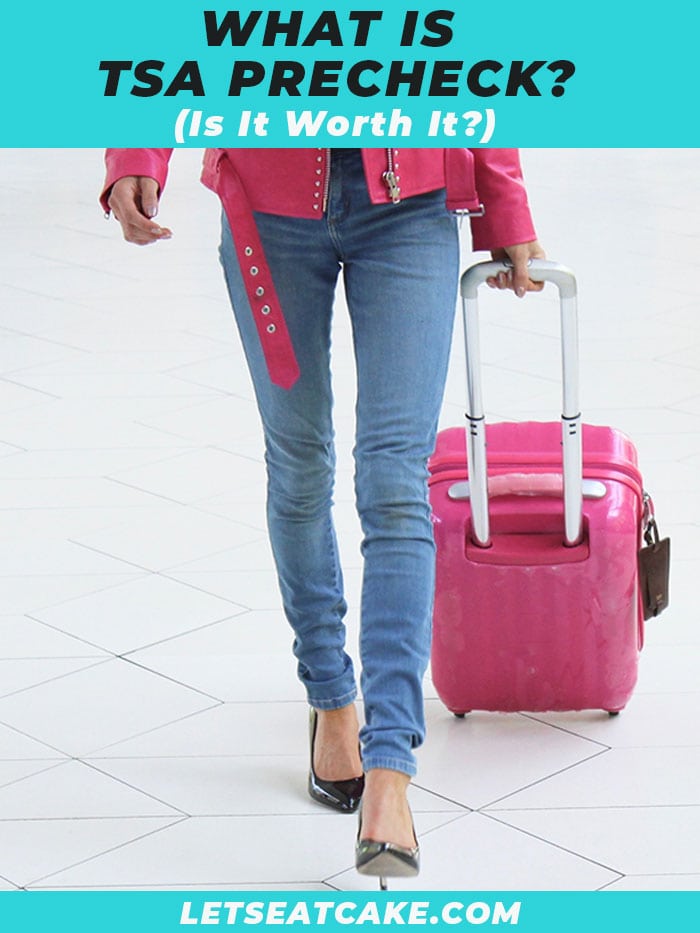 Latest posts by Ashley Hubbard (see all)
As an Amazon Associate we earn from qualifying purchases. This post may contain affiliate links from Amazon and other sites that we collect a share of sales from.
318 shares