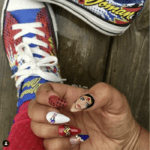 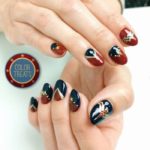 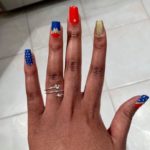 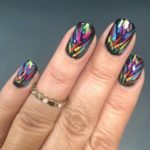 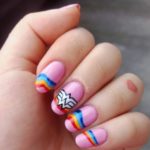 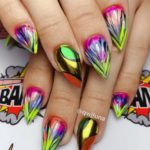 When your boss says you can’t come to work dressed like Wonder Woman, show your Amazonian pride with your manicure.

If you’re a Diana Prince fan, you already know that Wonder Woman 1984 is coming out on Christmas Day. So, it’s time to remove your Christmas nails and don these Wonder Woman nail art ideas to channel your inner goddess from Themyscira.

Most of these designs you can try out at home with a basic nail art kit, or to make it even easier on yourself, a Wonder Woman nail stamp plate. If nail art really isn’t your thing, try out one of the press-on or decal options.

With Wonder Woman’s iconic red, gold, and blue, this simple chevron nail set is a more subtle nod to our favorite superhero. Since they’re press-ons, you can transform your nails about as quickly as it takes Lynda Carter to spin into a star-spangled leotard. 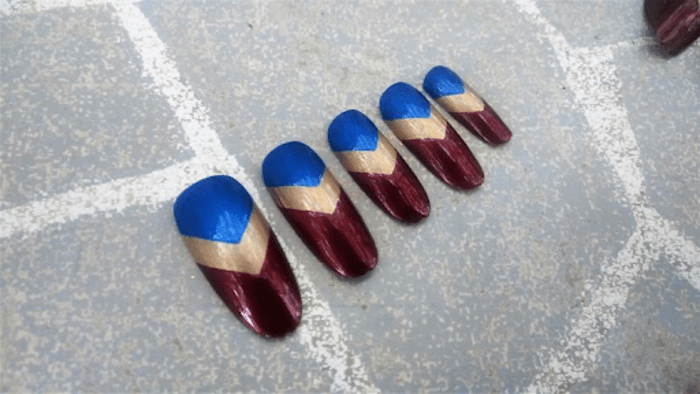 Nail stamps are going to be your best friend if you want to recreate this look from @Arselia. Either that or hands so steady you could win the World Championship of Operation. In which case, let’s team up next game night!

Rhinestones and chrome polish make this Wonder Woman design by @Home of Deva truly wondrous. It even features a chain lasso, but please, do not try to lasso of truth your boyfriend with your manicure.

If you were mesmerized by the teaser posters and the trailer showing Gal Gadot rocking the Golden Eagle armor, get the golden talon look with these chrome polish press-ons, available on Etsy. Nothing gives you confidence quite like a gold chrome mani. Unless it’s seeing your ex at the grocery store when they’re looking super hag and you just got a blow-out and a gold chrome mani. 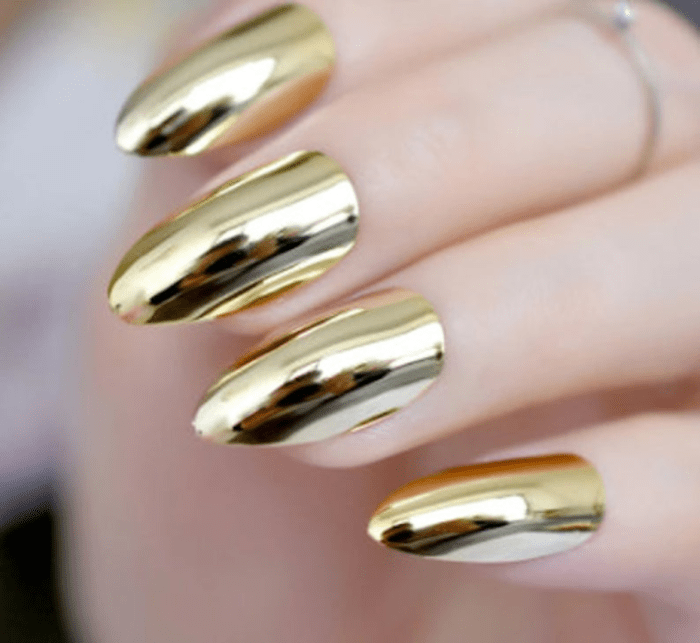 These neon nails are inspired by the Wonder Woman 1984 posters. Just get all of those retro vibes and go full-on 80s: fanny pack, big hair, and leg warmers. Or just try out this neon-inspired manicure idea from @pizzaandnailpolish.

This is @qwjluna’s take on the Wonder Woman 1984 poster, proving how neon and 80s vibes are super on-trend.

We wanted to get the interior designer that did Themyscira, but she was unavailable, so we’ll just fawn over these nails from @harleyquinnbabe.

@Katelyn Shay used Jamberry nail wraps that are no longer available, but Wonder Woman nail stamps and tape could help you recreate the look, proving what we knew to be true in 2nd grade. Every art project is better with lots of stamps and tape.

This hand-painted design by @Shaylin Duran makes us feel elegant and confident, like we could attend a party with a sword sheathed in the back of our dress. Just as long as nobody asks us to limbo.

If the whole idea of keeping a superhero suit discreetly hidden beneath civilian clothes has always appealed to you, this subtle minimalist take on Wonder Woman style could be your go-to.

The glitter ombre and bold stars in @Nail Love By Kylie’s design remind us Wonder Woman is all about making big statements and putting it all out there. She doesn’t wear a crown and a star-spangled leotard, and fly around in an invisible jet because she’s shy. It’s because of the loyalty miles she gets.

This incredible nail art by @Nina Blanchard goes with the matching kicks. By which we mean, we’d feel so badass with this manicure, we’d go around kicking doors down and trying to lasso miscreants. The shoes are pretty neat too.

If you don’t trust your hand-painting skills, these retro Wonder Woman nail decals on Etsy do all the work for you. It’s like doing a group project, only this time you’re the one putting your name on at the end and getting all the credit. 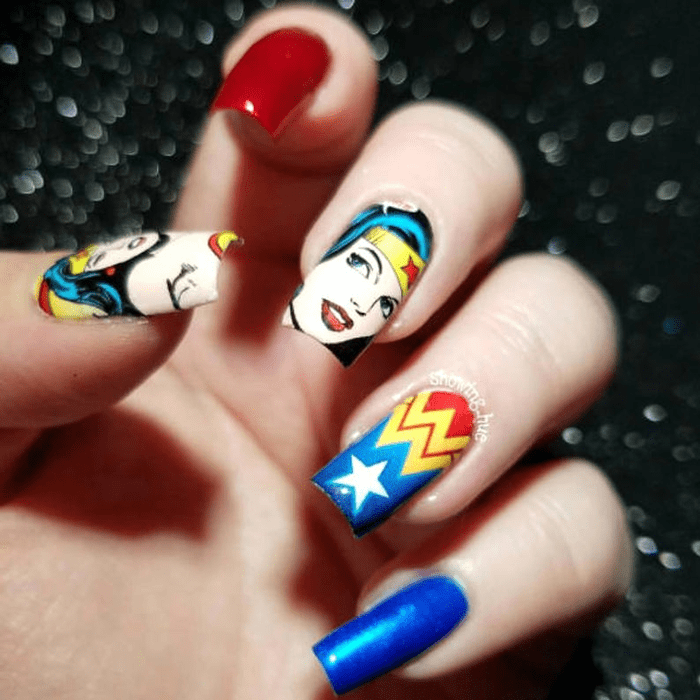 These almond nails from nail artist @Anita Buccioni with a starry accent nail give us 1975 Lynda Carter vibes. Just grab some go-go boots and a star-spangled cape and you’re ready for a Technicolor debut.

This pop art design with gold foil accents from @Bella Bar Organic Spa is so chic, you’ll feel ready to deflect whatever comes at you with confidence, whether or not you have Wonder Woman’s bracelets. Sometimes metal cuffs just don’t go with the ‘fit.

If you’ve got a dark streak and want to let your inner baddie out, grab these cheetah print nail wraps from Ulta, inspired by Kristin Wiig’s character in WW84. Complete the villain vibe with some truly dastardly deeds, like biting into a whole KitKat, or not giving a courtesy wave.

A leopard can’t change its spots, but you can with these chic nude and cheetah print press-ons available on Etsy. 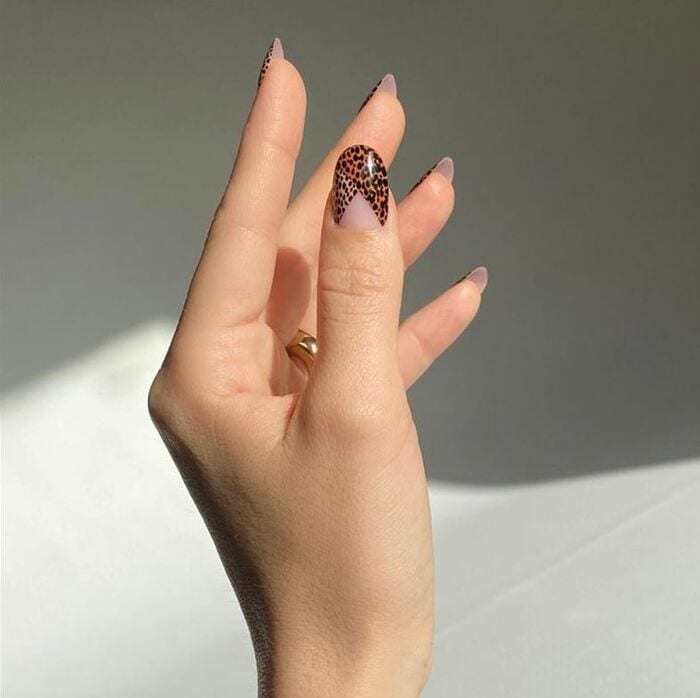 This nail art from @Bambi of Teddy Bar Nails reminds us of Wonder Woman’s motto, “only love will truly save the world.” Well, that and cutting down on our use of microplastics.

Latest posts by Marissa Rousseau (see all)
As an Amazon Associate we earn from qualifying purchases. This post may contain affiliate links from Amazon and other sites that we collect a share of sales from.
1.4K shares