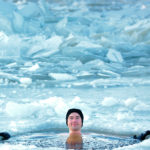 Early on in March, when we all went indoors, some of us lucky ones with cash to spare (not us) thought ahead (also not us) and ordered a Nintendo Switch and downloaded Animal Crossing. The game was cute, calming, and all ruled by the Tom Nook, who we’re pretty sure is the devil.

Earlier today, Nintendo announced that starting on July 3rd, you’ll be able to dive and swim in Animal Crossing. Mermaid furniture is also coming back in case you want to go full Ariel.

As usual, Twitter was silent. By which we mean, it erupted with a whole scuba tank full of tweets about the update. Sure, you can’t swim in a real pool or go to the beach, but hey, this is the next best thing, right?

Me wanting to dive into the museum’s aquarium tanks in animal crossing pic.twitter.com/nOMm4huiVf

2. Summers in Australia sure are rough.

3. Hold on a second. This sounds oddly familiar.

Animal Crossing in June: There’s all kinds of sharks in the ocean now!

Animal Crossing in July: You can swim now! pic.twitter.com/qrHSpKvO39

animal crossing fans finally waking up and seeing that they can go underwater #ACNH pic.twitter.com/Xb7VeKqcmy

5. According to Captain Marvel, hot girl summer isn’t cancelled after all!

So you’re saying we can become MERMAIDS 😱 https://t.co/TTOTrl5Ug1

Animal crossing: aren't you excited for our fun summer update where you can go swimming to cool down in the inviting cool ocean and escape that summer heat!

Everyone in the Southern hemisphere. pic.twitter.com/2Xx4789m77

If I can't be mauled by a shark I'm upset

Nintendo: Summer update with swimming and diving and snorkels and pirates perfectly fits the season!🏝️🏖️🏊☺️

Southern Hemisphere players: am i a joke to you pic.twitter.com/Yuo0QVt7WC

10. Gonna have some raging BBQs this summer. In the game. We mean in the game.

Nintendo: people are mad about Pokémon Unite what do we do help
📞📞📞
Nintendo: hey Aya is your water diving thingy with the pirate bird ready to go yet? pic.twitter.com/998qbK9OR0

Animal crossing said: sorry your summer is fucked but look at least you can swim in the game 🤗

14. Just add some mermaid furniture and you’ll be all set!

leaked screenshot of me diving in the next animal crossing update pic.twitter.com/BULnrLeXxU

everyone swimming in the southern hemisphere pic.twitter.com/aq9TMN8N6U

16. I wanna walk on the ocean… step on the stones…

/#ACNH
me: aw i wanna walk on the shore and swim in the ocean

17. Seriously, this guy is the worst.

I love that #ACNH reveals you can swim in the ocean now… just shortly after it revealed YOU COULD CATCH SHARKS. Tom Nook, is this you?! pic.twitter.com/BxHehkqrBI

people: we're getting bored of animal crossing, think we're just gonna play some other things until it-

nintendo: YOU CAN FUCKING SWIM NOW GET BACK HERE

When you find a cute guy on twitter and he has ‘Animal Crossing’ in his bio pic.twitter.com/D8q2Tt17lQ

Latest posts by Rebecca Swanner (see all)
As an Amazon Associate we earn from qualifying purchases. This post may contain affiliate links from Amazon and other sites that we collect a share of sales from.
257 shares