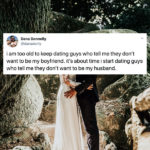 This week, our comedian spotlight is on Dana Donnelly — aka @danadonly on Twitter — who grew up in the Silicon Valley and now lives in LA. The self-proclaimed “crop top comedian” writes and acts and performs at clubs and theaters around LA. Shortly after graduating from college, HBOAccess selected her to develop a pilot for their Writing Fellowship. In it, the guy she likes texts her back.

convinced my 44 year old therapist to confront her husband about not liking her instagram posts and left the session feeling so empowered by the realization that while she can’t make me better, i can make us both worse.

sir i am a millennial and this is what happens when you don’t take rent via venmo pic.twitter.com/jWVTrb69gs

im dating someone who asks me when my 17 year old sister turns 18 every single time we hang out. i deserve better. this guy clearly has a hard time remembering birthdays, and i don’t wanna be disappointed on mine.

the tv show “the americans” in which keri russell plays a hot KGB agent inspired my bf to break up w me to join the CIA, now he’s undercover at his parents’ house in utah as a guy who dates a goth 19 year old.

6. Don’t start on our DIY facemasks.

7. Please. Tell me more about your TPS reports.

just found out the guy im dating is married. wild. i always just thought he was doing a bad borat impression.

9. Next you’re going to tell me we have to answer the door when Postmates arrives.

guys are like “i love my mom we’re so close” and then u tell them to download costar so u can see your exact astrological compatibility and suddenly it’s all “what? i can’t ask her for my birth time. that’s so weird”

hear me out. it’s the notebook, but instead of heartfelt letters every day for a year, they’re text messages that say “wyd” every other month for a year, and instead of them getting married in the end, she just learns that he never even saved her number in his phone.

12. Does he not know the half plus seven rule?

my ex who’s 30 just told me he’s dating a 21 year old. horrible. i was like “babe, you’re better than that. find someone more age appropriate. what about that 29 year old you cheated on me w? she seemed great.”

next time u see a couple at dinner sitting in silence on their phones and think “oh, how sad,” just know that he is looking at sports news and she is scrolling through his twitter likes looking for something to be mad about and this actually makes them both very happy.

16. Meanwhile, back on MySpace…

tried giving an older therapist a chance, but when she said “i think it’s unproductive to try to surpass the guy you’re dating’s ex in instagram friends” i was like, lol, they’re called followers, you clearly have no idea what you’re talking about.

when a man follows me on instagram and doesn’t immediately go like All my old swimsuit photos, just Most of them? im like, dam ok. looks like we got a personality guy on our hands.

you know a guy is your boyfriend if you are in a museum and you hear an employee ask him to “please tell your girlfriend to stop touching the paintings,” and he doesn’t scream “SHE’S NOT MY GIRLFRIEND!”

19. Maybe we shouldn’t leave him on read so often.

21. Thanks for coming to our TED talk.

crazy how some white guys are so scared of seeming racist that when i ask them if im their first non-white girlfriend they totally just avoid the question by reminding me that im not their girlfriend.

while i believe the pacsun cashier omitting the question “back to school shopping?” while ringing me up, despite asking the five girls in line before me, was likely an oversight, i will be making a botox appointment asap.

how hot a guy is 100% dictates how i expect to be treated. if you’re an actor on a CW show? fine. text me twice a year at 2 AM. if you’re 5’7” and you have a weird body? you better show up to our first date w an engagement ring, begging me to let you drive me to the airport.

24. You can always count on mom to say the right things.

when i am sad about a boy i like to facetime my mom and she tells me she loves me and not to get worked up about something so silly and also have i gained weight?

ok hear me out, handmaid’s tale, but the men are the handmaids, and the handmaids don’t exist to have babies but instead to like your instagram posts – does this sound good to anyone else?

Latest posts by Mac McCann (see all)
As an Amazon Associate we earn from qualifying purchases. This post may contain affiliate links from Amazon and other sites that we collect a share of sales from.
384 shares