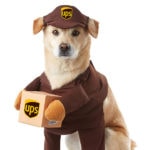 Dogs don’t know it’s Halloween. But dogs are amazing and they go along with our nutty traditions. Because, they know that the sooner they tolerate being outfitted in a funny dog costume for Dress Up Day, the sooner it will be Toddler Drops Bits of Turkey on the Floor Day — the holiest of canine holidays.

Funny dog costumes are a great excuse to fire up your Instagram machine and share your dog’s annoyed expressions, so we’ve gathered some of the most creative ones to delight your followers and confuse your beloved fur baby.

There is no shortage of Star Wars-themed pet costumes, but for those thinking outside the box, skip the obvious (yet adorable) AT-AT Walker costume and Ewok and go for the Bantha Rider. Robot dinosaurs are cool, but nothing screams “Halloween” like a giant elephant-goat demon. 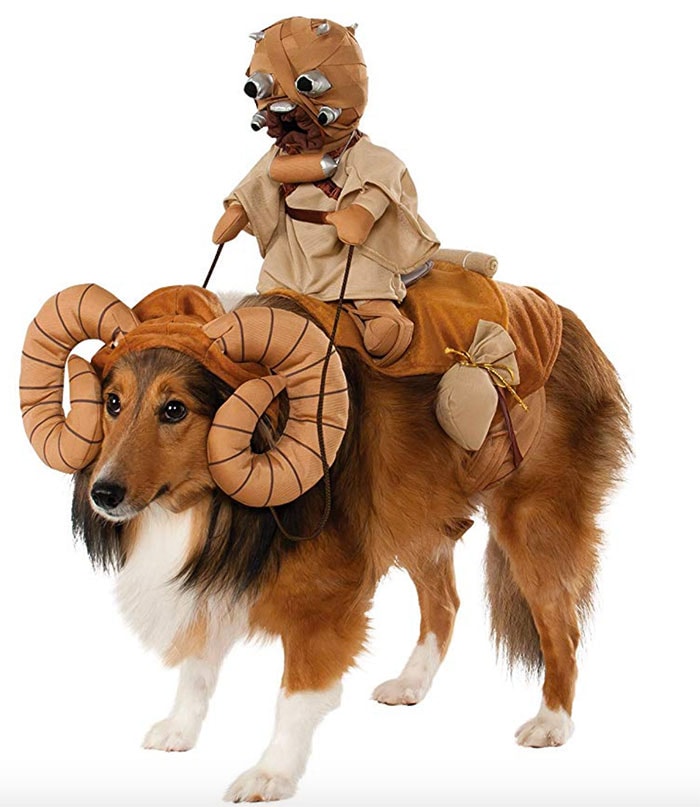 Haunted amusement parks? Criminal groundskeepers? Masked monsters? Free snacks? Forget Snoopy. The real animal all-star of the Halloween season is Scooby Doo. The show is the epitome of All Hallows’ Eve and when tucked safely into the Mystery Machine van, your pooch will have the confidence needed to finally solve The Mystery of the 13-hour Nap. 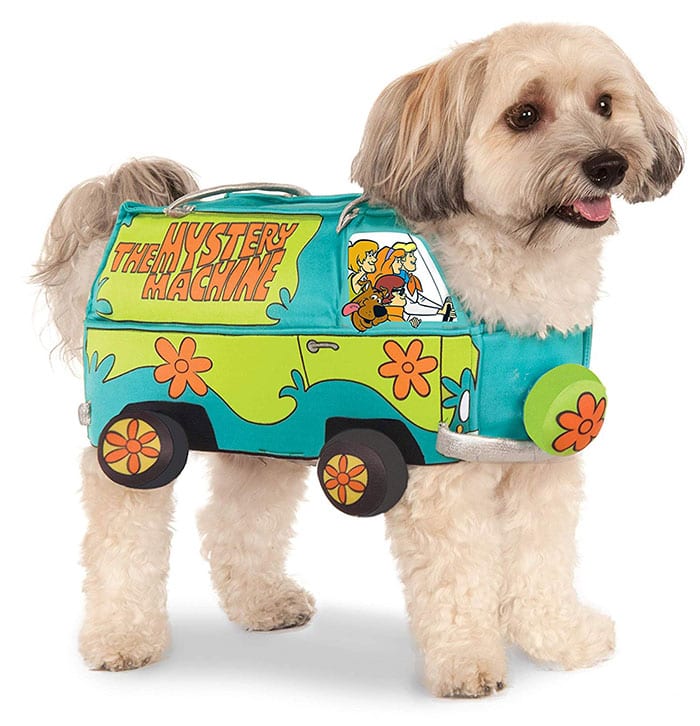 80s nostalgia is always welcome when it comes to picking a costume, and Beetlejuice is the perfect 80s Halloween movie. Dress your dog as the ghost with the most and if someone says his name three times, let him off the leash and watch him wreak havoc! Watch out for sandworms! 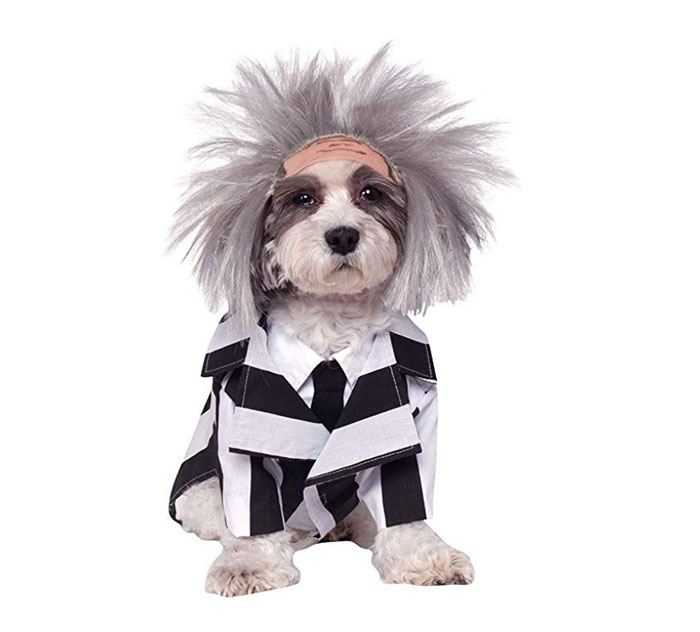 If you’re not sure about turning your dog into an eight-legged arachnid, watch the video below. Even the friendliest of furry friends turns into a hell beast when wearing a spider costume. There are several to choose from, but this one looks the most traumatic-stress-inducing. Did you just hear something outside?

One problem with pet costumes is that it may look like the character’s head is chewing on Fido. Turn that design flaw into a design dream by dressing your dog up as a dinosaur and suddenly it appears that a usually mild-mannered herbivore has swallowed your four-legged friend! We knew we couldn’t trust vegans! 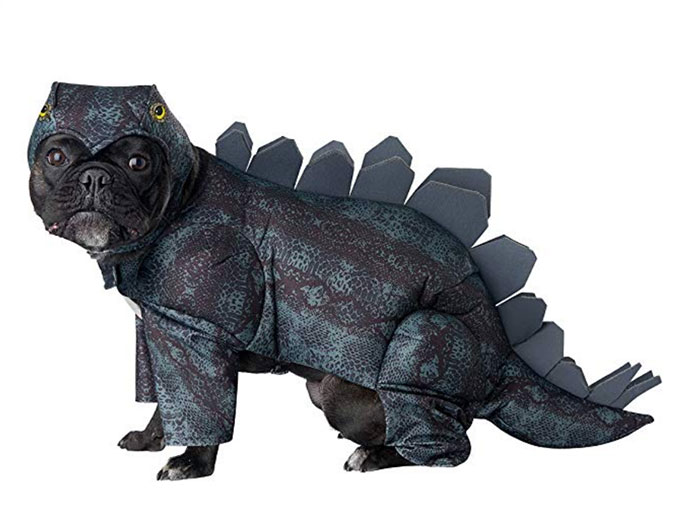 Some people dress up as animals, so why not let your animal dress up as people? If you’re looking for a large dog costume, a nice polo shirt looks sharp and yet is somehow disturbing, like the kid who always wore dress pants in gym class. He’ll fit right in at the yacht club. Get it here. 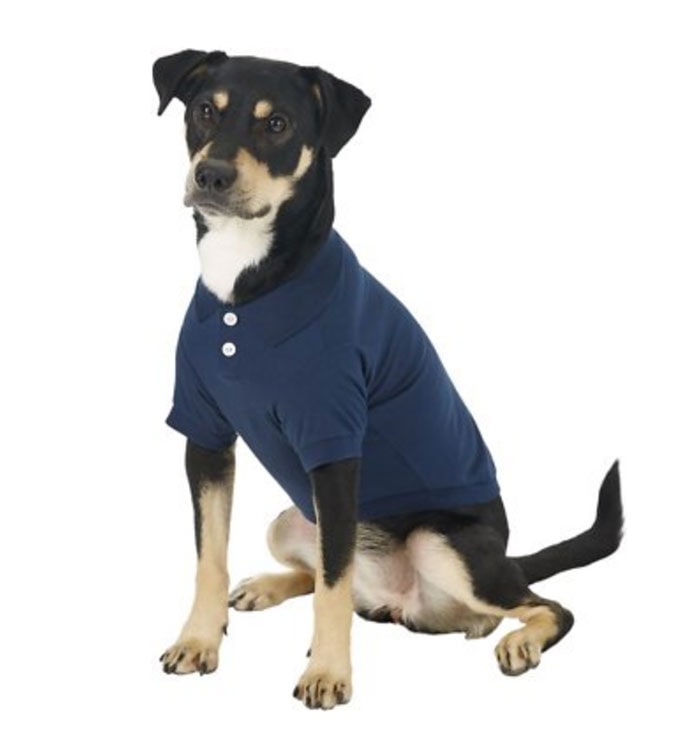 Truth be told, we love this costume mostly for the red wig. A dog in any wig is worthy of a ten-minute segment. But a red wig on a dog may be the pinnacle of comedic art. Tell us the dog is The Little Mermaid, or Jessica Rabbit, or Wendy roasting everyone on Twitter. We don’t care, we’re too busy laughing. 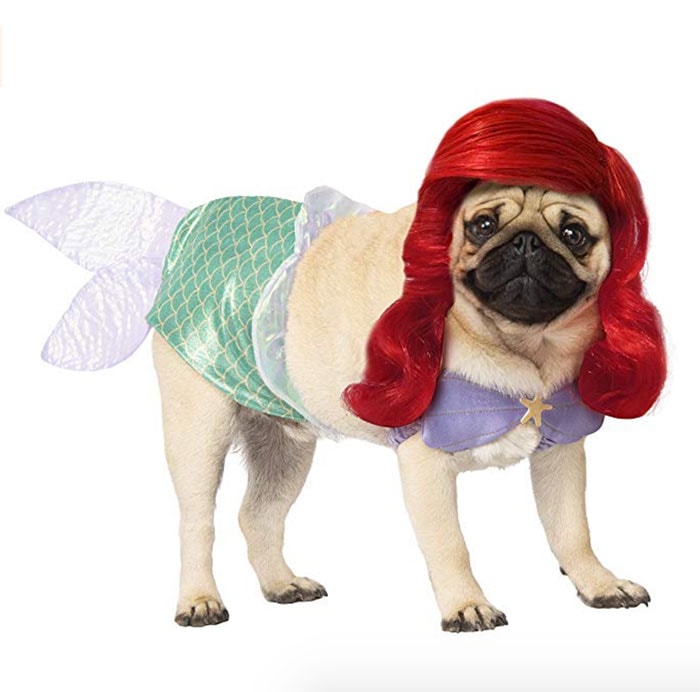 Speaking of red hair, this Child’s Play costume took the internet by storm this year and is already sold out this year on Amazon. We blame the French Bulldog and his killer-doll attitude. Best friends ‘til the end, right? Get it here.

Any day now, our collection of Beanie Babies will appreciate in value and we’ll be millionaires! While we’re waiting for the world to remember what Beanie Babies are, you can dress up your dog in one of the easiest and pet-friendly funny dog costumes on the list. Simple, cute and unique. (Warning: Some people may think your dog’s name is Ty.) 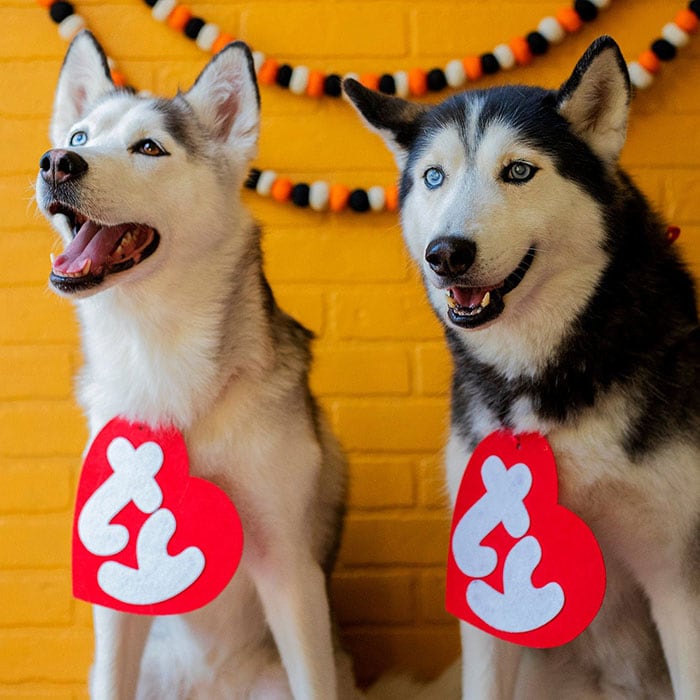 What better way to celebrate the season of asking strangers for candy than by dressing your dog up as a monster who kills teenagers in their nightmares? Oooh look, he has a little glove! 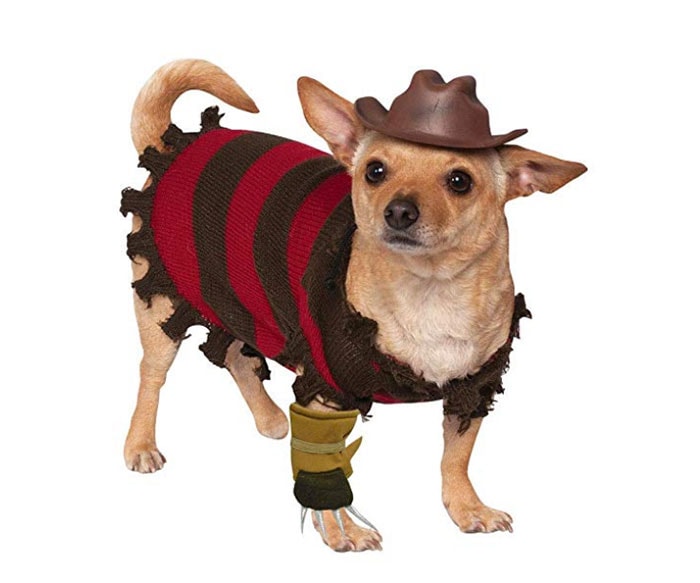 Until they make a pet costume that looks like a vacuum, this is the best way to dress up your dog as his worst enemy. 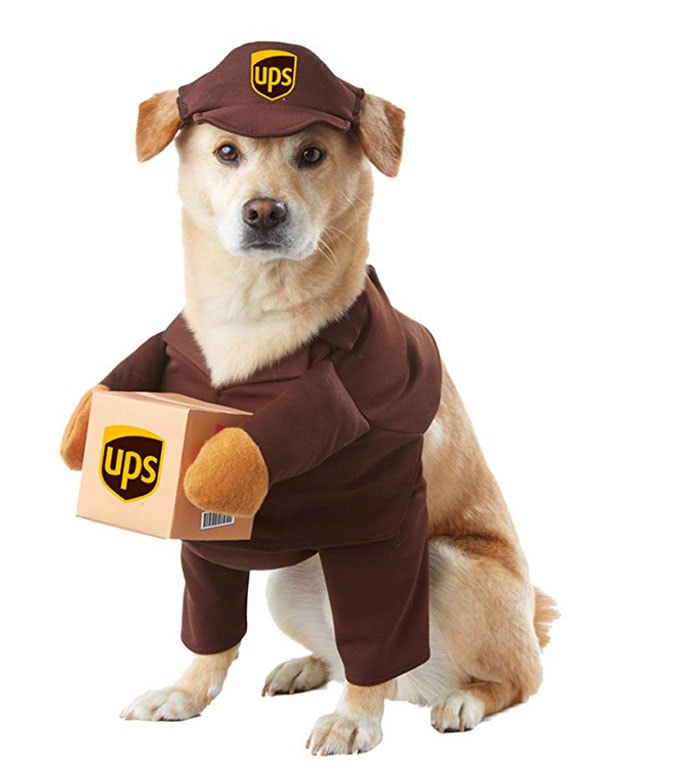 Does your dog need a $350, bespoke King George Halloween costume? Yes. How else will your October production of Dog Hamilton stand out from the rest of the dog-themed Broadway knockoffs? 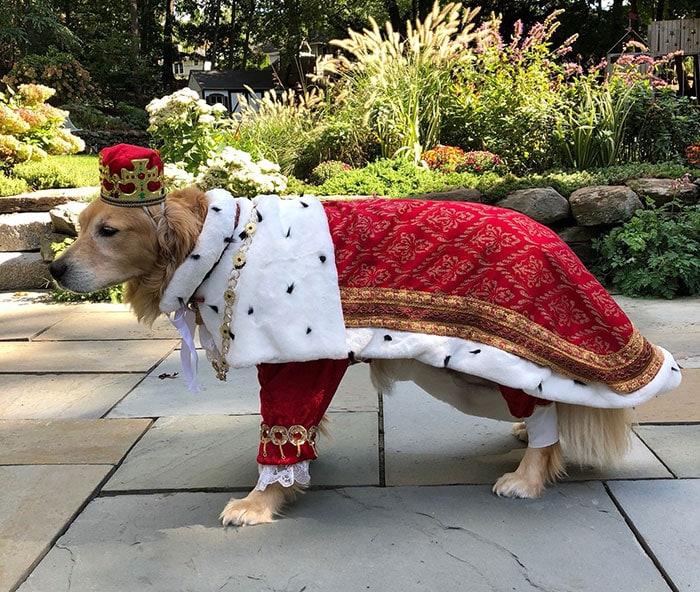 This Deadpool costume is probably self-aware that it’s a costume and so it becomes a meta-narrative that breaks the fourth (and fifth!) wall of the holiday. What’s real anymore?! 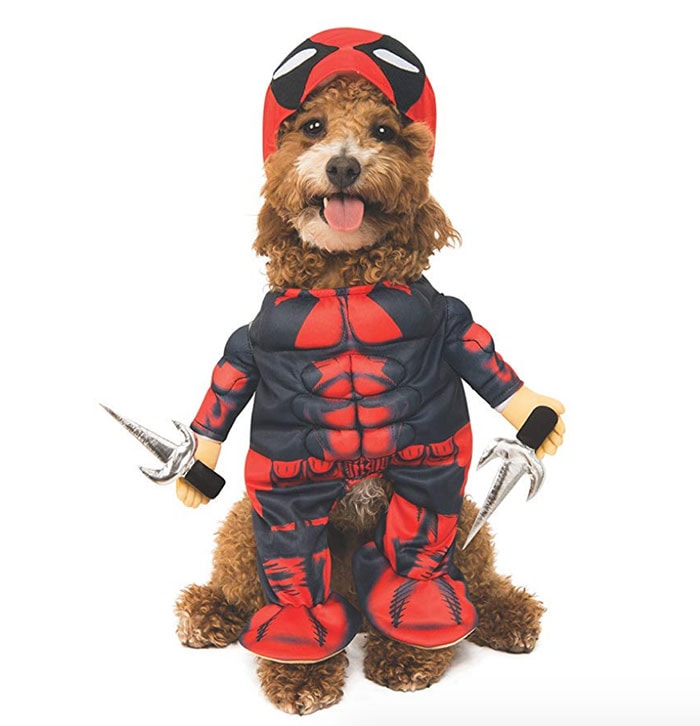 Friday the 13th purists will tell you that Jason never wore a hockey jersey with his own mask on it. They’ll also tell you he wasn’t a dog. We’re sure they’re still good people. 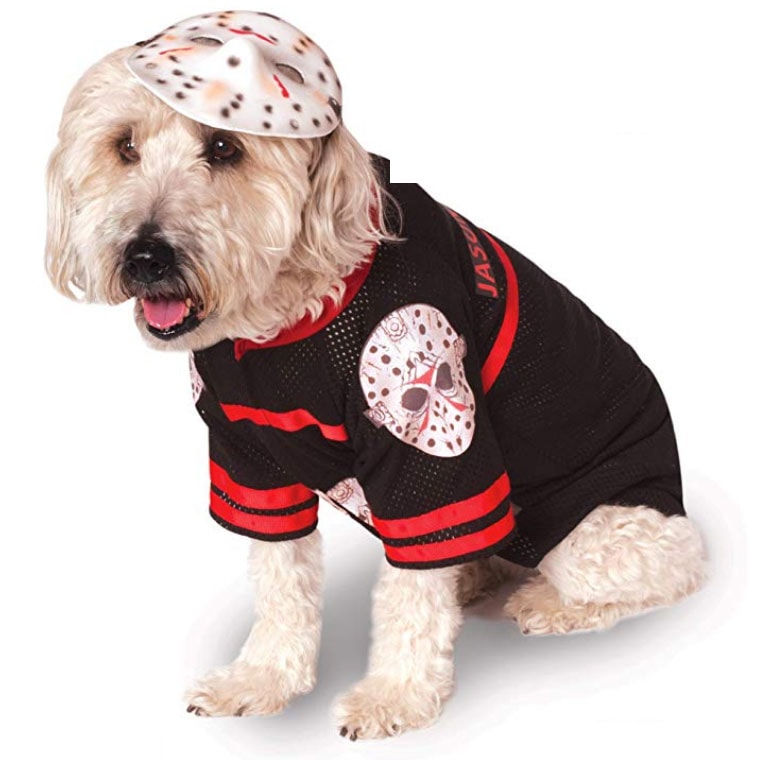 Watching your pet prance in this brilliantly designed costume from IT is more entertaining than the actual movie…and twice as horrifying. Some say Stephen King’s most terrifying canine is Cujo. We think it’s Pennywise carrying a red lollipop. 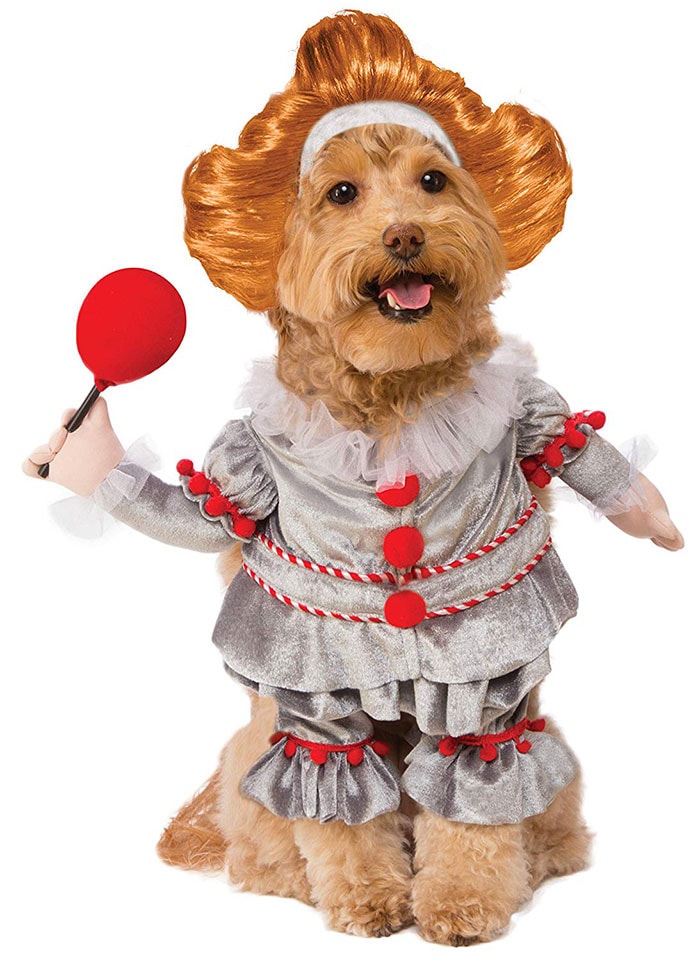 Latest posts by Dan Bergstein (see all)
As an Amazon Associate we earn from qualifying purchases. This post may contain affiliate links from Amazon and other sites that we collect a share of sales from.
713 shares