“Is it really a Pinterest recipe if you didn’t learn about the author’s Italian lineage and how she met her 2nd husband?”

This week, we’re shining a spotlight on Megan, a legal assistant, mom, and aspiring cult leader. Under her handle Sassparilla (or @Megatronic13), the Utahn consistently publishes some of the funniest tweets — ranging from flirting with peacocks and parenting (not with peacocks) to house hunting and just about everything else under the sun. 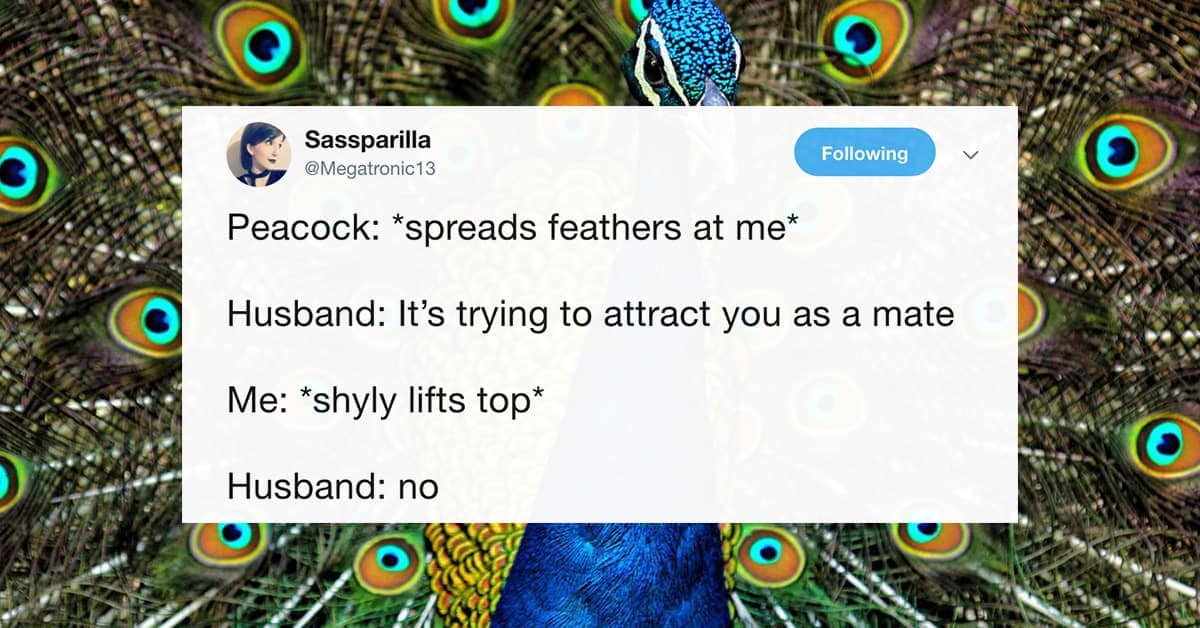 Me: but what if there’s a shark in there?

Shark: *popping head out of the water* I have an English degree and it’s improbable

2. How do they always manage to make such a mess?!

Me: it’s so nice my kid is playing so quietly

My child, nonchalantly walking out of the kitchen: pic.twitter.com/O2dZkS3Odm

3. I miss the freedom of youth.

I love how my kid can sleep like a twisted up pretzel and be just fine, but when I sleep on the wrong side I have to pray I won’t run over a pedestrian on the way to work because I can’t turn my neck to the right.

My 4-yr old just fell off her bike and said, “I fell and it hurt my vagina, but I got right back up.” New motto to live by, ladies.

Therapist: do you know why you have two ears, but only one mouth?

Therapist: so you can listen more than you talk.

Me: oooh, okay. Now explain why I have three nipples

One time a lady at my church told my class that once we had sex, we were essentially a chewed up piece of gum and that no one worthwhile would want us. I wanted so badly to say that Buddy the Elf loves chewed up gum, but I didn’t and that’s probably the biggest regret of my life.

Me: sshhhhh, the house is right there *loading shotgun*

Realtor: *steps on a twig that snaps loudly*

House: *picks up garage and runs into the forest*

Me: for a realtor, you really suck at house hunting

Coworker: I can’t believe the boss treated you like that, you should say something

Me: You’re right! Enough is enough!

Me: *apologizes for 15 mins straight*

9. And, that, kids, is why we don’t sparkle in the sunshine.

Me: look who came by for a little sucky sucky

Me: my therapist said that nostalgia is causing me to be delusional

Furby: me love you

All I’m saying is that way more people would go to church if the sacrament was pizza and soda.

🎶through despair and hope 🎶

🎶through faith and love🎶

13. Work deadlines, Mercury being in retrograde, long commutes… shall we go on?

I’ve got 99 problems, and being direct could solve most of them but the idea of confrontation is completely terrifying and makes me want to crawl in a hole and die. Anyways thanks for inviting me to this rap battle, I think it’s going really well.

My work makes me have different passwords for each 7 programs I use, and they all expire at different times. So I guess what I’m trying to say is, come at me, Satan. I’m already in hell.

15. Sound implausible until you actually try and feed one.

Me: I still think my name is better

Moderator: your word is, loser

Me (blinded by spotlight): L-O-

Moderator: as in, you’re a total loser

18. The level at which we’re listening is directly related to how hot you are.

Guy at party: and that’s how Bitcoin works

Me: *nudging my service parrot*

Is it really a Pinterest recipe if you didn’t learn about the author’s Italian lineage and how she met her 2nd husband?

A shark cage, but you use it to keep people you knew in high school from approaching you in public.

22. The Hoover Dam sure is pretty this time of year.

If you’re going on a vacation with a toddler, just know that half of your time will be spent keeping them from jumping into the nearest water source.

The cashier at the grocery store and I said “have a good one” to each other at the same time so I was all, “JINX!” and she just stared me and now I’m starting to think that she doesn’t really want me to “have a good one”.

Peacock: *spreads feathers at me*

Husband: It’s trying to attract you as a mate

Waiter: what if I add some frozen water to the glass?

Waiter: would a dirty lemon wedge seal the deal?

He’s not your man, he’s a manatee.

Latest posts by Mac McCann (see all)
As an Amazon Associate we earn from qualifying purchases. This post may contain affiliate links from Amazon and other sites that we collect a share of sales from.
9 shares