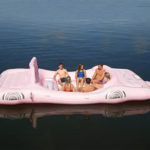 Summer is a mere few months away and it is time to start prepping by stocking up on cocktails and beach balls, not prepping the doomsday bunker with more cans. We see you eyeing those beans, Karen.

We can all agree, nothing says summer like hanging out by your body-of-water-of-preference. Ours is Chris Evans. He is 70% water after all.

Sam’s Club has just released this summer must-have, a 21-foot Retro Pink Limo Island so you and your friends can all lay back and relax together.

This big boy isn’t just long, it’s heavy duty. The floating limo is made from heavy-gauge PVC so you’ll want to use it forever, or at least until Elon Musk releases the Tesla: Pool. We hear that comes complete with Wi-Fi, phone chargers, and an escape hatch to Texas so you too can avoid paying taxes.

The floating limo comes with inflatable benches that fit up to six people, which means there is plenty of room for you and the few friends you have left after not being able to see the crew for a year.

The retro lounge also comes with cup holders and a built-in cooler to store a copious amount of watermelon-flavored White Claws. It’s no Yeti, but it actually floats, unlike our $300 cooler that’s now hanging out at the bottom of the river.

Ready for some Grease-level cruising? This limo has an inflatable windshield, side view mirrors, and is open-air, so Trevor can shout “party” as you float past everyone.

Ringing in at $199.98, the Retro Pink Limo Island is what we will be dreaming about until summer. Along with Chris Evans.

Latest posts by Katie Schindelheim (see all)
As an Amazon Associate we earn from qualifying purchases. This post may contain affiliate links from Amazon and other sites that we collect a share of sales from.
3.4K shares