Home » Recipes » Snacks
This post may contain affiliate links that we collect a share of sales from. Click here for more details.
4.8K shares
Jump to Recipe

If you’re looking for a (very) last minute Game Day recipe, these Maple Bourbon Pecans are it. They’re easy, have only a few ingredients, and addictive as all get out. As far as an easy, game day snack goes, these candied pecans are my new go-to snack. 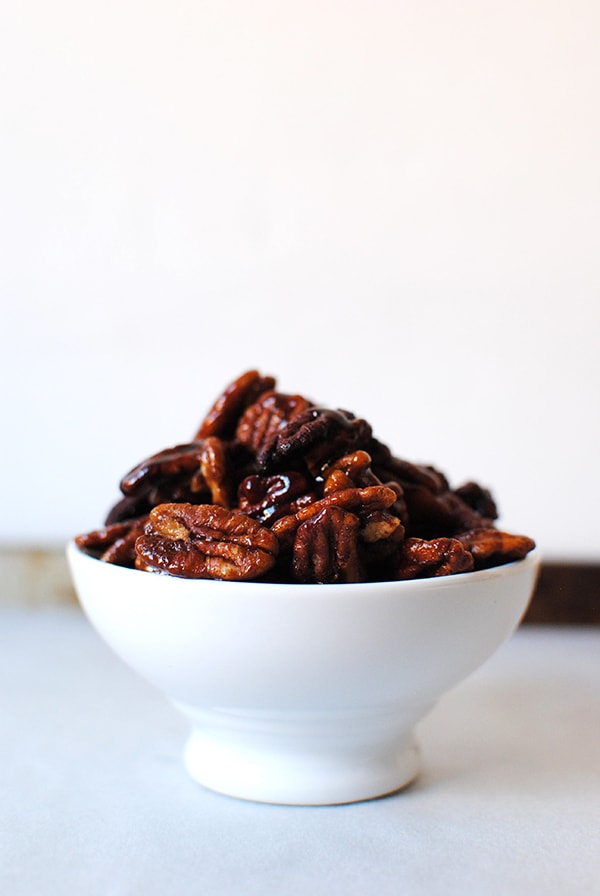 I blame Portland for my addiction to all things maple bourbon-flavored. While I was there, I did the obligatory tourist thing and stood in line for an hour at Voodoo Donuts. And, oh was it worth it. I tried a raised yeast doughnut topped chocolate frosting, peanut butter, and crushed Oreos that’s named after Wu Tang’s ODB.

But it was their Maple Bacon Donut that did me in. The sweet and salty combination was divine. The sugar didn’t overpower the maple flavor and the bacon wasn’t overdone. I’ve tried to find a comparable version since and have tasted many other maple bacon donuts, but none have come close.

I also haven’t been able to get over the flavor of that first bite. That love is what inspired this recipe for Maple Bourbon Pecans. It’s a slightly-sophisticated twist on that maple bacon flavor… and while it’s perfectly snackable on its own, you could add chopped bacon to take it to the next level. Since this candied pecan recipe is meant to help you get something to hungry guests as soon as possible, I skipped it in the version below.

What Is the Difference Between Bourbon and Whisky?

Before I dive in to the recipe, let me first help with some troubleshooting first. One of my favorite family recipes is Bourbon Hot Dogs. And it used to be that every time my parents and I made them, we’d fish through the cabinets looking for a bottle that would suffice. “Will whiskey do?” my Dad would call out from the back. How about rye?”

Whiskey (or Whisky)
Whisky is a distilled alcohol made from fermented grain mash (corn, barley, wheat, or rye) that must be distilled to no more than 190 proof and bottled at at least 80 proof. In America, whiskey is usually aged in oak casks (these oak casks are why whiskey looks brown). American Whiskey cannot contain any flavorings, coloring, or additives, which is why if you look closely, you’ll notice that Jack Daniels Tennessee Honey is a described as a “honey liqueur blended with Jack Daniels Tennessee Whiskey.” Bourbon, Rye, and Scotch are types of whiskey.

Bourbon is a type of whiskey and is, in fact, the most popular type of whiskey in America. To be classified as bourbon, a spirit must contain at least 51 percent corn, must be made in new charred-oak barrels, must be made in the United States, must be distilled to no more than 160 proof, barreled at no more than 125 proof, and bottled at at least 80 proof. It also may not contain any flavoring, coloring, or other additives. There is no minimum aging period for bourbon, except for straight bourbon.
Taste: Bourbon has a sweet, slightly smoky taste. Similar to Tennessee whiskey.
Labels You Might Know: Bulleit, Jim Beam, Maker’s Mark, Elijah Craig, Wild Turkey, Evan Williams, Buffalo Trace, Angel’s Envy, Pappy Van Winkle.

Scotch is a type of whisky made in Scotland. To be classified as Scotch, the spirit must be made in Scotland, must be produced from at least 51 percent malted barley, distilled at no more than 190 proof, bottled at at least 80 proof, and aged in oak barrels for at least three years.
Taste: Scotch has a flavor similar to bourbon but with more smokiness at the end.
Labels You Might Know: Johnnie Walker, Dalwhinnie, Glenmorangie, Laphroaig, Macallan, Dewar’s, Cutty Sark, J+B, Chivas, Glenlivet.

Rye is another type of whisky. To be considered rye whiskey, it must be must be produced from at least 51 percent rye, distilled to no more than 160 proof, barreled at no more than 125 proof, bottled at at least 80 proof, and aged in charred, new oak barrels for at least two years.
Taste: Rye has the spiciest, most intense flavor of the whiskey subsets.
Labels You Might Know: Hudson Manhattan Rye Whiskey, Whistlepig Straight Rye Whiskey, Redemption Rye Whiskey, Knob Creek Rye Whiskey, Sazerac 18 Year Rye.

This isn’t — by far — a comprehensive list. There are many other types of whiskey, including Irish Whiskey, Canadian Whisky, Japanese Whiskey, all with their own distinctions and flavors. But, hopefully this was a good primer and will help you if you need to substitute one for another in a recipe!

How to Make Maple Bourbon Pecans

Making maple bourbon pecans is easy. Just grab a bottle of your favorite bourbon (or swap it out based on the flavor profiles above) and begin!

Preheat your oven to 325°F. Place butter, cinnamon, and salt in a small microwave-safe bowl (or small saucepan) and heat until the butter is melted. Place pecans in a small bowl. Pour melted butter mixture on top. Add bourbon and maple syrup and mix together. Spread pecans onto single layer on parchment-lined baking sheet and bake for 10-15 minutes until browned but not burnt. 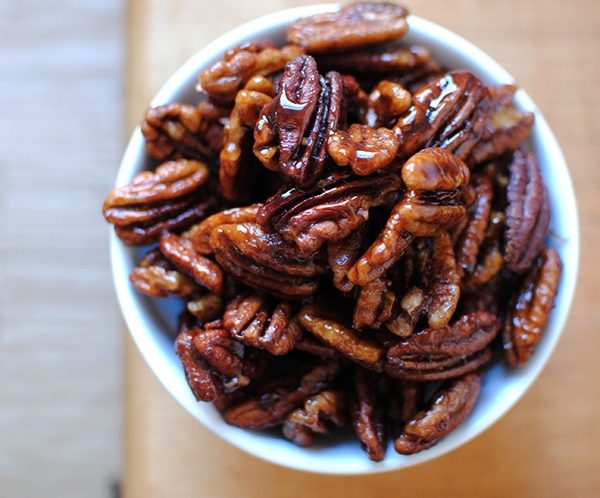 Nutrition Facts
Maple Bourbon Pecans
Amount Per Serving
Calories 239
* Percent Daily Values are based on a 2000 calorie diet.
Course: Snack
Cuisine: American
Author: Rebecca Swanner
Did you make this recipe?Leave a review below, then take a photo and tag @letseatcakeblog on Instagram so we can see it!

* If you’re curious about which bourbon I used, I went with Woodford Reserve.

This recipe was inspired by Sweet Paul’s Honey Rosemary Pecans. 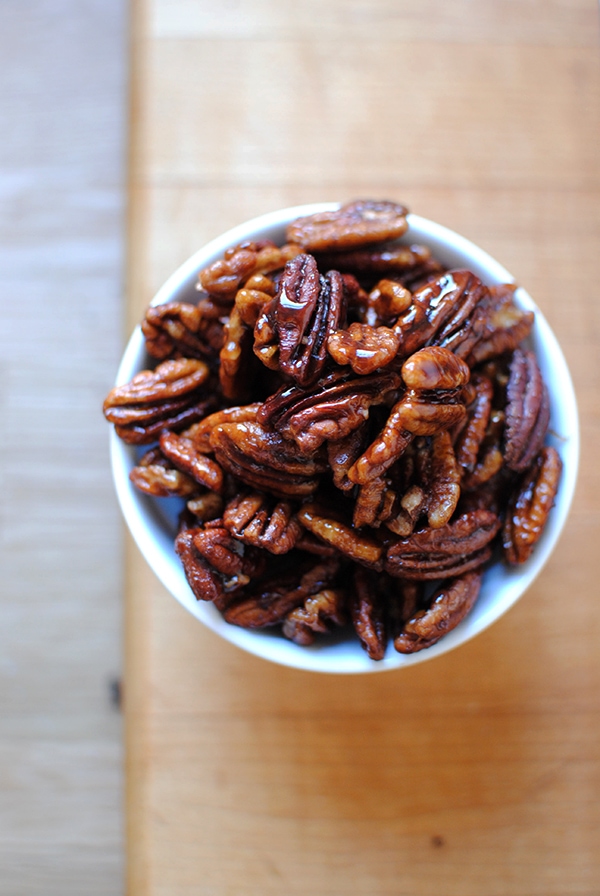 Latest posts by Rebecca Swanner (see all)
As an Amazon Associate we earn from qualifying purchases. This post may contain affiliate links from Amazon and other sites that we collect a share of sales from.
4.8K shares