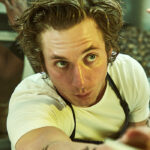 From the moment I started watching FX’s The Bear, I was hooked. Perhaps it’s because the first scene starts with one of my favorite songs, the Refused “New Noise,” or because the lead actor, Jeremy Allen White who plays Carmen, isn’t too hard on the eyes, or because Sydney (Ayo Edebiri) is a passionate, relatable, aspiring chef.

Probably all of the above. The show centers around a fine dining chef who inherits his late brother’s flailing Chicago sandwich restaurant. Not only is it riveting thanks to an impeccable script and brilliant, emotional performances, it feels true to what it’s like to work in a kitchen, all the way down to the kitchen terms.

From the speed and intensity that goes on behind the door (out of view of customers) to slang like behind, it immediately dropped me back into the time when I staged in the pastry department.

A lot of what those on the line say in kitchens is shorthand. It’s a way to let people know what’s going on quickly or to alert others to your location so no one gets burned, stabbed, or walked into.

Many of those kitchen terms — from 86 to hands to staging — were familiar to me, but if you’ve been watching The Bear and have no clue what they’re saying, here’s a glossary of the lingo they use.

Latest posts by Rebecca Swanner (see all)
As an Amazon Associate we earn from qualifying purchases. This post may contain affiliate links from Amazon and other sites that we collect a share of sales from.
92 shares