Home » Recipes » Desserts
This post may contain affiliate links that we collect a share of sales from. Click here for more details.
293 shares
Jump to Recipe 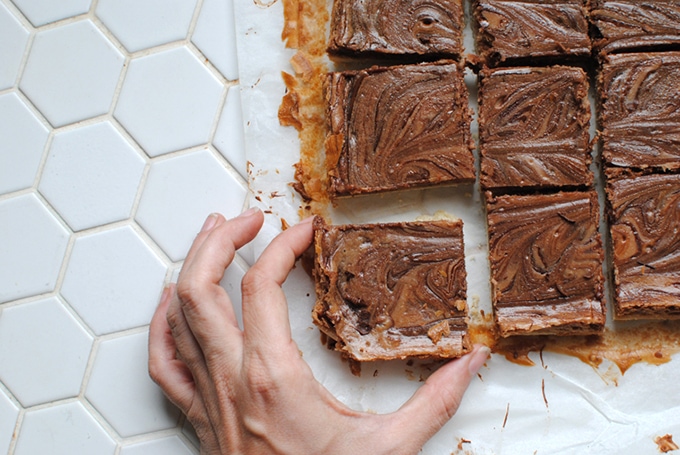 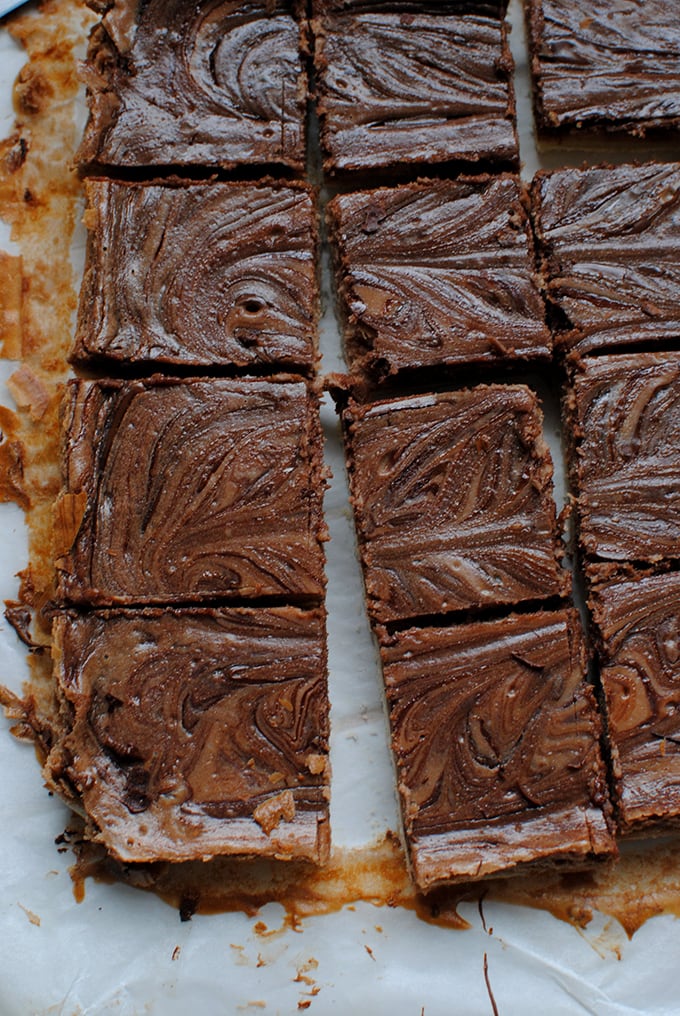 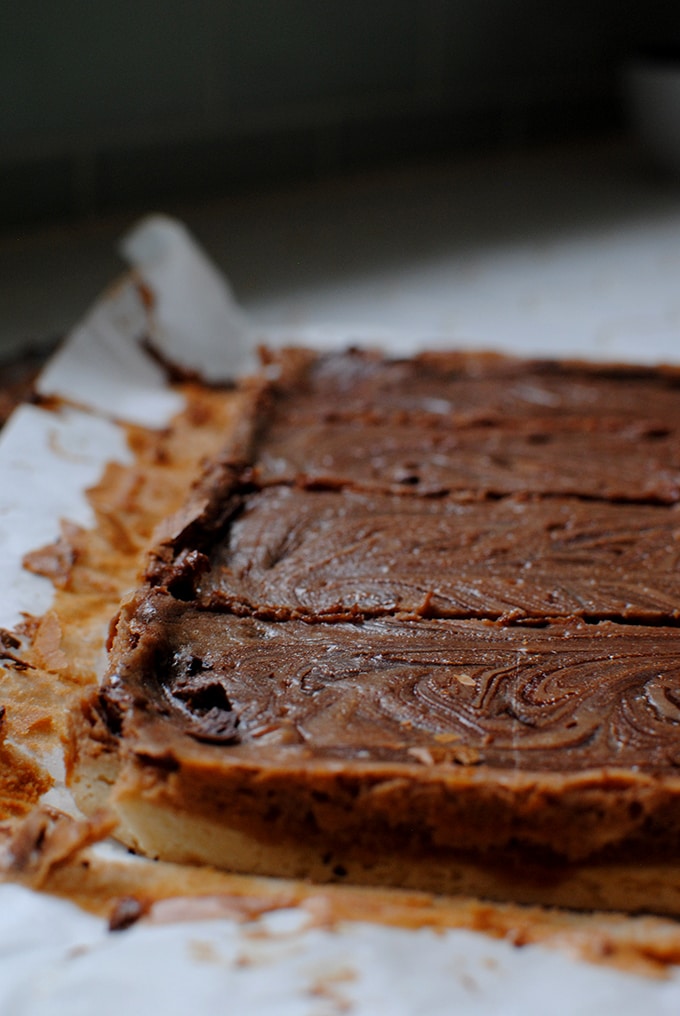 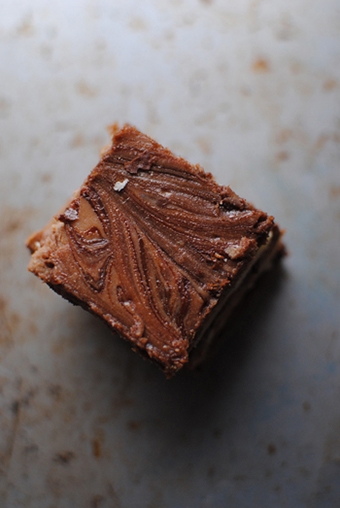 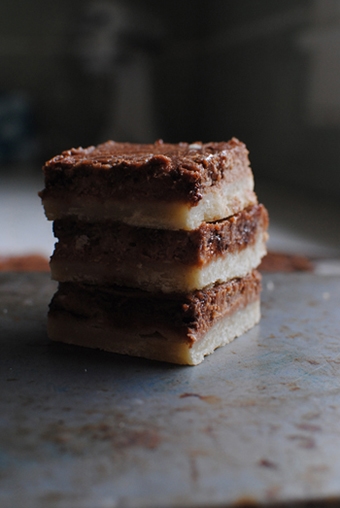 I have a confession to make.

You know last year, when everyone was going really bonkers over Daredevil? Well, I just couldn’t get into it. Sure the fight scenes felt like The Matrix on acid and the writing was solid and I wouldn’t kick Charlie Cox (who plays Daredevil) out of bed for eating crackers, but the show gave me nightmares. Am I a wimp?

This season, I’m hooked. Maybe it’s because Fisk isn’t [spoiler alert] smashing anyone’s head with a car door or because I’m more familiar with the [spoiler alert again] the other characters they’re bringing in, or because Cox is flashing that winsome smile more often, but for the past few days, it’s been my dinner entertainment.

Which brings me to another indulgence…these Nutella Cheesecake bars. They’re both dark and light, perfect for munching on while watching Daredevil (or Game of Thrones! Seriously, is Jon Snow dead? Is he alive? What’s going on?! Thankfully we only have a few more days to go until we all find out).

They’re not too sweet so the hazelnutty chocolately goodness of the Nutella is very front and center. Nom nom. And the shortbread base is simple as all good shortbread recipes should be. Once you whisk together the flour, sugar, salt, and butter for the cookie base, these bars are practically done. 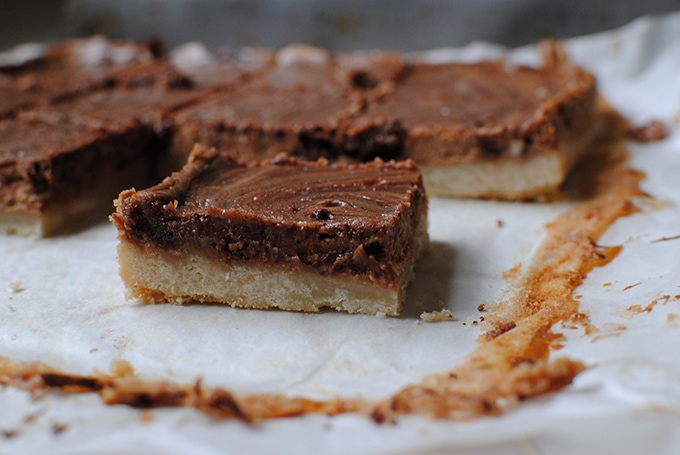 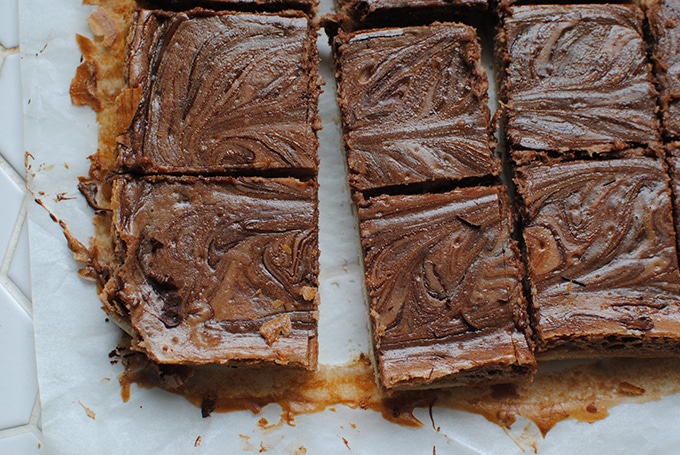 I love mixing. It’s one of my favorite things about baking. Like with making ganache, at first, it’s like oh my god, is anything ever going to happen?! And then it does. Patience is a virtue. Just not one I happen to have. Oopsy.

When you add the shortbread base it’s the same. Nothing seems to happen. At first, it’s like running your hands through snow. Snow with lumps of butter (which would seriously be the most delicious snow ever). You keep mixing and kneading, still nothing. More kneading. More mixing. Finally, something starts to happen! The texture begins to change and if you had given into temptation and just dumped the primordial crust into the pan and hoped for the best, it wouldn’t have magically formed into a cookie! Ok, well, it might have, but not a very tasty one. But then, voila! Shortbread!

Course: Dessert
Cuisine: American
Keyword: nutella cheesecake bars
Author: Rebecca Swanner
Did you make this recipe?Leave a review below, then take a photo and tag @letseatcakeblog on Instagram so we can see it!

Latest posts by Rebecca Swanner (see all)
As an Amazon Associate we earn from qualifying purchases. This post may contain affiliate links from Amazon and other sites that we collect a share of sales from.
293 shares