Home » Food + Drink » Trends + News
This post may contain affiliate links that we collect a share of sales from. Click here for more details.
1.3K shares 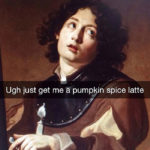 It’s that time of year to tell Becky to pull out her Uggs and scarves because Starbucks brought back the Pumpkin Spice Lattes on August 25th! Is it cliche? Yes. Is it basic? Yes. Are we literally standing in line at Starbucks right now? Yes, and we’ll take a venti with whipped cream, thank you very much.

So, here are some PSL memes and a little about how the little latte that could sparked a cult following so large we eventually ended up with Pumpkin Spice deodorant.

When Is the Starbucks Pumpkin Spice Latte Available?

August 25h is the earliest that Starbucks has ever officially released the PSL, and we are here for it. It may be 95 degrees outside, but it’s a crisp fall day in our hearts.

When did this PSL mania start in the first place?

Starbucks debuted the Pumpkin Spice Latte in 2003 at their stores in Vancouver and Washington D.C., and it didn’t take long to hit cult status. Now the PSL even has its own Twitter and Instagram accounts, and we spend our summers counting down to what John Oliver calls “that special time of year where we voluntarily imbibe pumpkin spice lattes, the coffee that tastes like a candle.”

Honestly, we’re just sharing this because we want you to understand how exciting it is that PSLs coming soon! Here are some of the previous Pumpkin Spice release dates:

What’s In a Pumpkin Spice Latte?

Mostly sugar. Some caffeine (not sugar), and magic (sugar).

Here are the real ingredients in a PSL:

We hear you asking, “What are diglycerides?!” Sorry, can’t answer you through this mouthful of pumpkin spice magic. 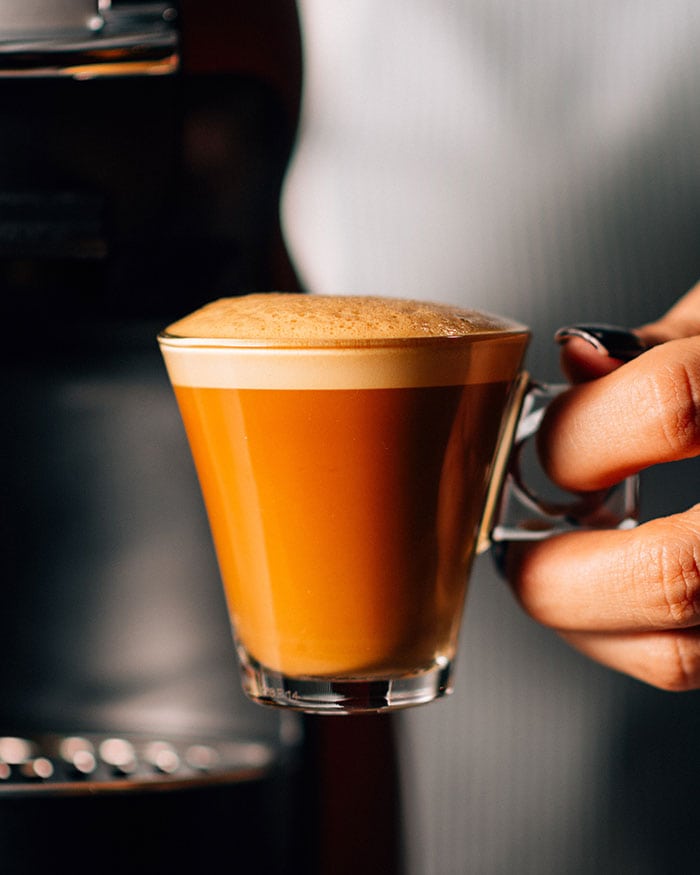 How Many Calories Are in a Pumpkin Spice Latte?

There are 420 calories in a PSL. Here are a few more nutrition facts:

(The stats above are for a Grande Whole Milk Pumpkin Spice Latte with Whipped Cream because that’s our preferred order. You can customize it to match your size and milk preferences here.)

How Can I Enjoy a Healthy Pumpkin Spice Latte?

Make one at home? Otherwise, for a skinny pumpkin spice latte, order a tall, skip the whipped cream, and ask the barista to use only half the pumps of syrup. Then weep. Softly. (That’ll cut the calories to around 270.)

Or… you could make your own at home like Wholesome Yum did with this Keto Pumpkin Spice Latte.

Is Starbucks’s Pumpkin Spice Latte the Only One?

No, apparently it doesn’t live in the same world as the Highlander. Every local coffee shop will have their own spin on the pumpkin spice latte.

Even nationwide brands are getting in on the action. Dunkin Donuts started selling their Cinnamon Sugar Pumpkin Signature Latte last week, along with some apple cider munchkins. And sometime between now and the end of September, Coca-Cola will be releasing Cinnamon Coke, because they got the message that you add Fireball to everything.

Of course, PSL season wouldn’t be complete without PSL memes, so we’ve rounded up some of our favorites for you! Enjoy!

25 Pumpkin Spice Memes You Should Retweet

My card was just declined at Starbucks and when I called VISA they told me I was 39 and to settle down about pumpkin spice lattes. 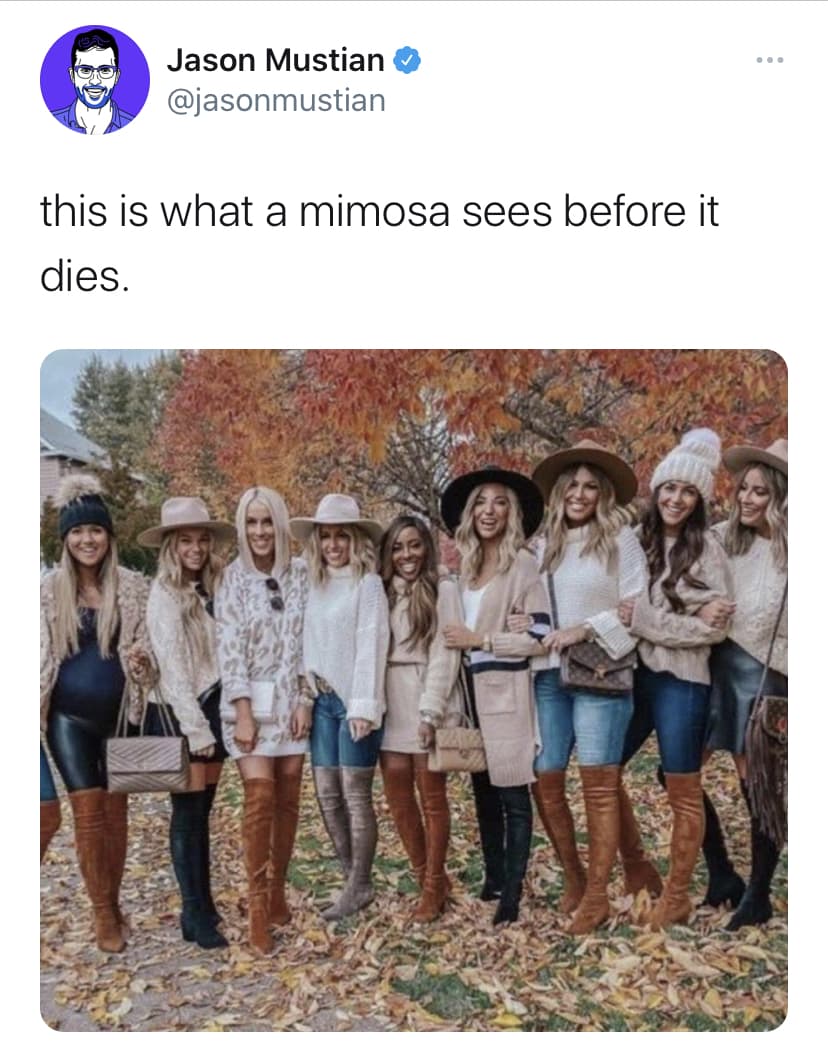 4. Someone order us a Bloody Mary. 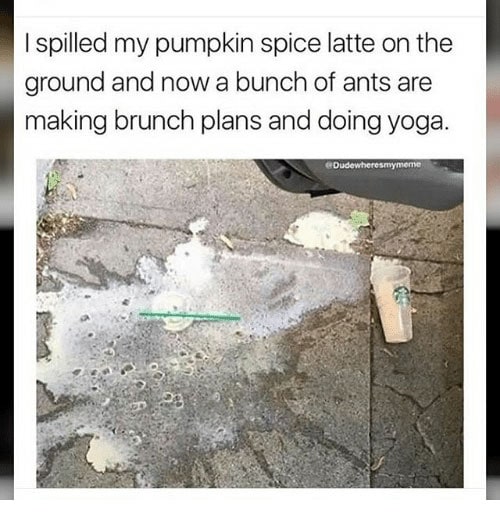 Me: That's pretty good. What is it?

Me: *falls to my knees because I've become everything I hate*

5. Can someone please help?

Planting some pumpkins. How do I get the spice in there? I'm thinking Injections. Maybe spicy water or a dry rub

*sees one leaf on the ground* pic.twitter.com/uouIm49yv9

7. Maybe we should see a doctor. 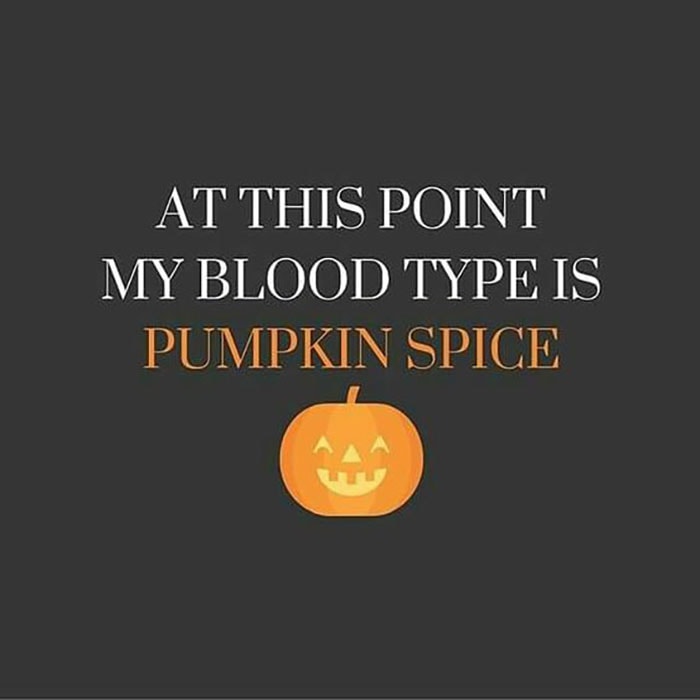 "Hi, welcome to Starbucks, how ca-"
Me: "PUMPKIN SPICE LATTE!"

Everyone named Becky today, rushing to get a #PumpkinSpiceLatte: pic.twitter.com/aIr070cHpG

My yoga pants and Uggs are a little hot in 90 degree weather but I want my #PumpkinSpiceLatte to know I’ll do anything for love.

me when people judge me for ordering a pumpkin spice latte pic.twitter.com/ZWJOCfEKGF

My spirit animal is a Pumpkin Spice Latte

Sorry you didn't know your hot pumpkin drink was really a scented candle.

Moment of silence for the senseless slaughter of pumpkin spice on today, the #FirstDayOfFall

22. You’ve got a braver stomach than ours, sir.

Well, it wasn't quite an enchilada, but nachos followed by a pumpkin spice latte hit the spot. It's fall already!

When will my pumpkin spice latte return from the war 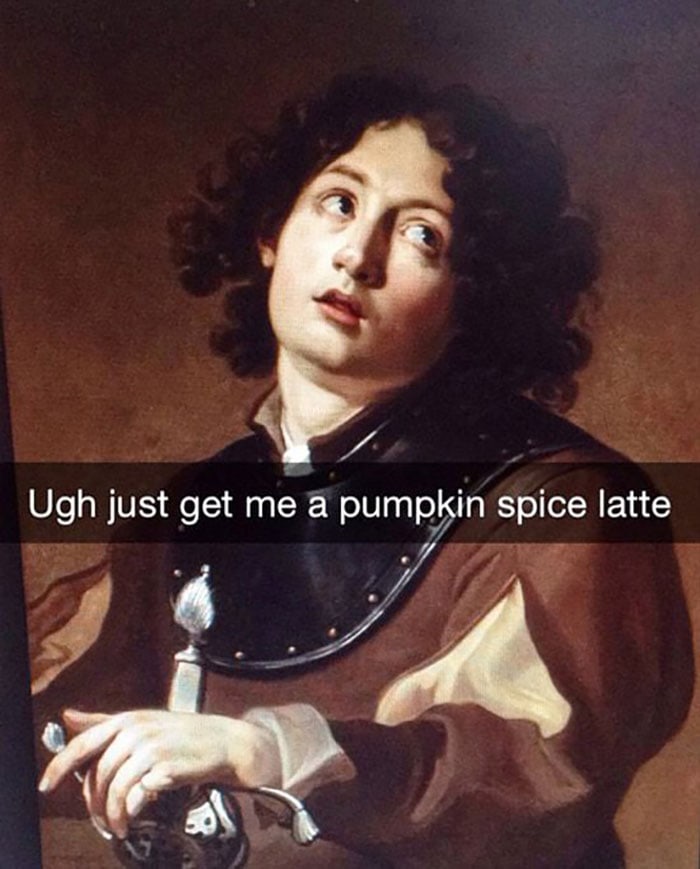 Latest posts by Mac McCann (see all)
As an Amazon Associate we earn from qualifying purchases. This post may contain affiliate links from Amazon and other sites that we collect a share of sales from.
1.3K shares