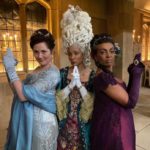 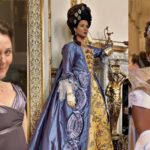 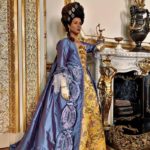 As if the eight potential Bridgerton seasons wouldn’t be enough to satisfy regency-era role play enthusiasts, the world is expanding even more. Netflix officially announced a Queen Charlotte Bridgerton spinoff show dedicated to her backstory.

The upcoming spinoff will air as a limited show of only one season. A little disappointing, as Queen C has become one of the most adored characters in the series. But luckily, the main series has already been renewed through season 4. 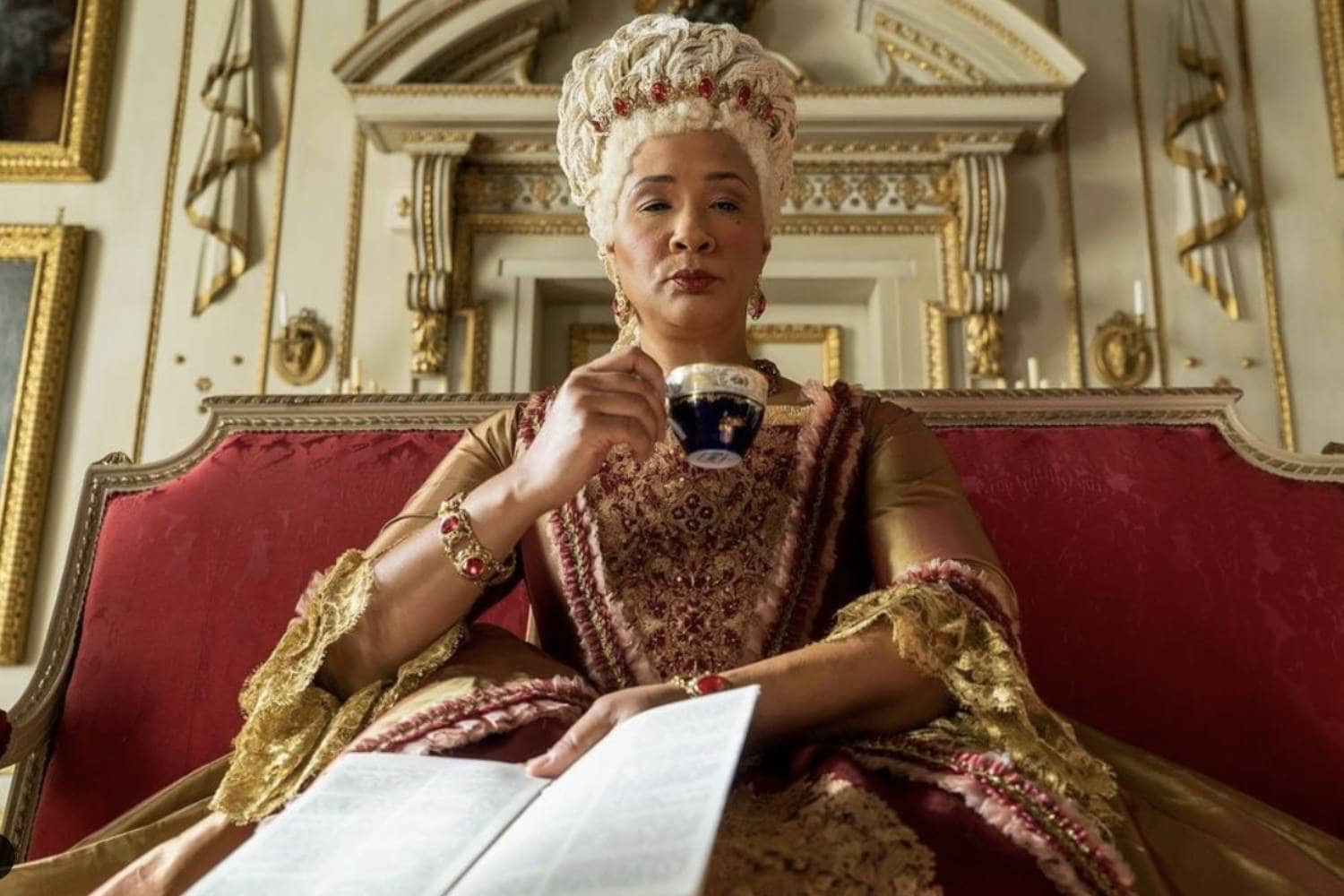 Here’s everything we know about the new show featuring the beloved queen of the court.

Everything We Know About The Queen Charlotte Bridgerton Spinoff

What will the spinoff be about?

Not much has been spilled yet, but we’ve been doing some digging. Much to the dismay of our newly manicured nails.

Golda Rosheuvel (who plays the Queen herself) and Adjoa Andoh (who plays Lady Danbury) recently told E! News that the series will serve as the origin prequel story for Queen C, and also Lady Danbury and Violet Bridgerton. 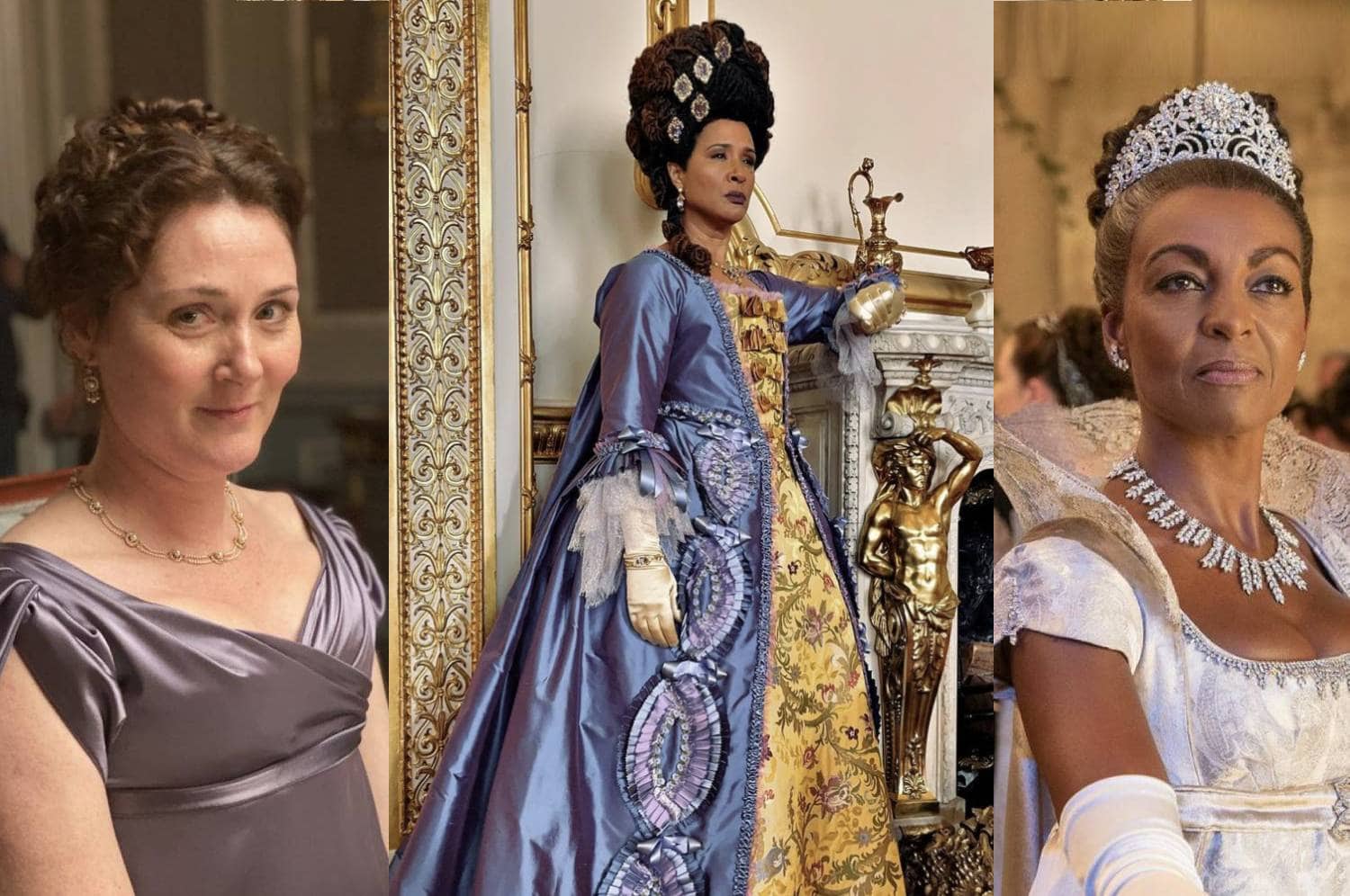 “These relationships are long-lived between [these women],” Andoh said. “That’s what the prequel is going to talk about.”

It sounds like the tea has had plenty of time to steep, and we can’t wait to sip it up.

But we know that so many Bridgerton fans are in it for heart-fluttering eye contact and steamy tension. So we can only assume – and desperately hope – that the Queen Charlotte Bridgerton spinoff will include some of that.

Ideally with some smaller wigs for the bedroom adventures. 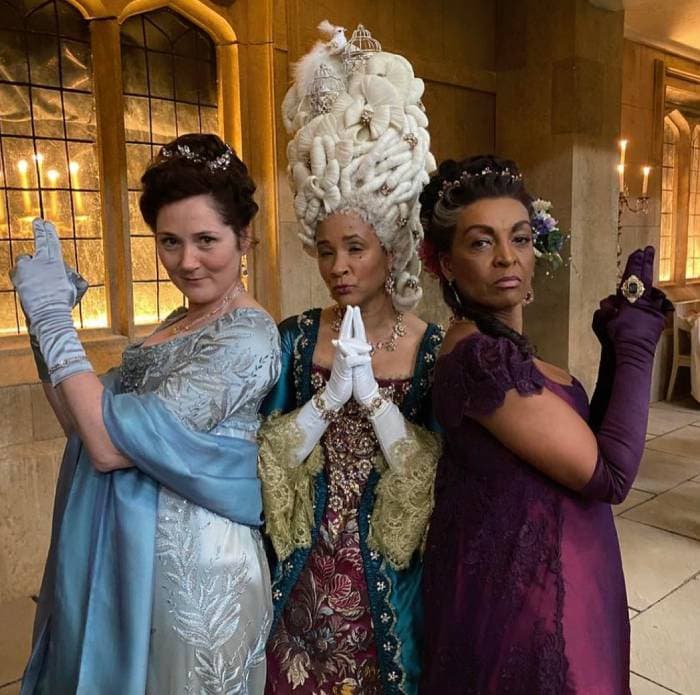 Bridgerton is based off of a book series by Julia Quinn, but Queen Charlotte doesn’t actually appear in them. So in a very low-scoring Scrabble word: no.

Queen Charlotte was specifically created for the Netflix series, and she’s actually based off of a real-life royal who was born in 1744. She married King George III, not to be confused with the 28 other King Georges. Or something like that. 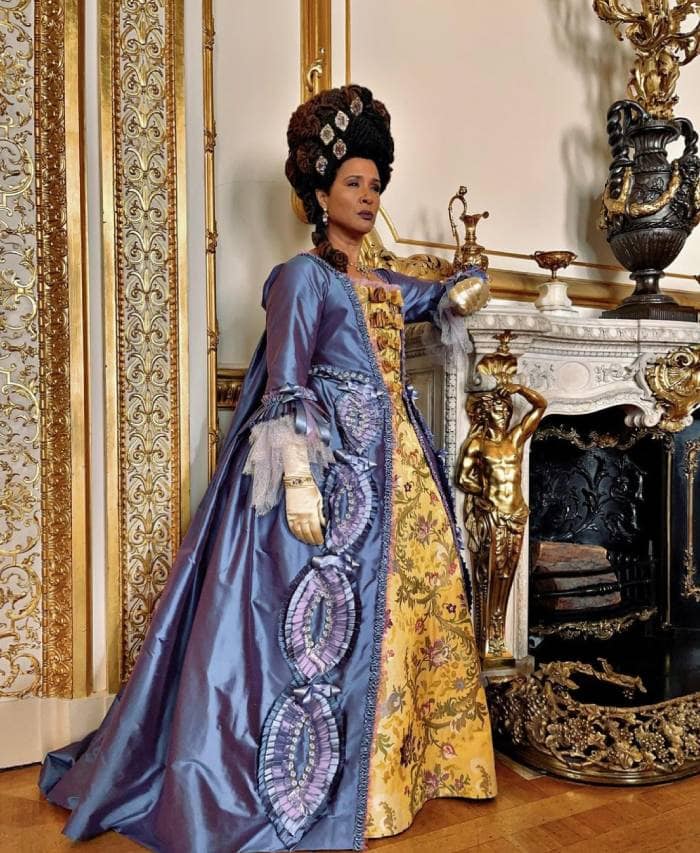 Ok, so what else can we expect from the story line?

Other than the confirmation that the spinoff will follow the early years of Queen Charlotte when she first arrives in London, her budding relationship with Lady Danbury, and something involving Violet Bridgerton, we don’t know much.

We do, however, know too much about reupholstering cat beds.

But since Queen Charlotte is based on a real-life royal, we might guess that the Bridgerton spinoff may pull some plot points from history. And the real Slim Charlotte has plenty of interesting points to pull from.

Married to King George III only 6 hours after meeting (couldn’t be us), Queen Charlotte was already familiar with the life of royalty as a Princess in Germany.

There has been a long-standing belief that Queen Charlotte was actually the first monarch of color in the UK. She loved the arts, and was even said to have discovered Mozart.

Can we sway a little into fiction and beg for a young Queen C matchmaking moment on this one? It’s giving us The Bachelor plus Love Is Blind vibes, where contestants can only express their love through music.

Don’t tell us you wouldn’t finish off a bag of Doritos while you watch that until 3AM. 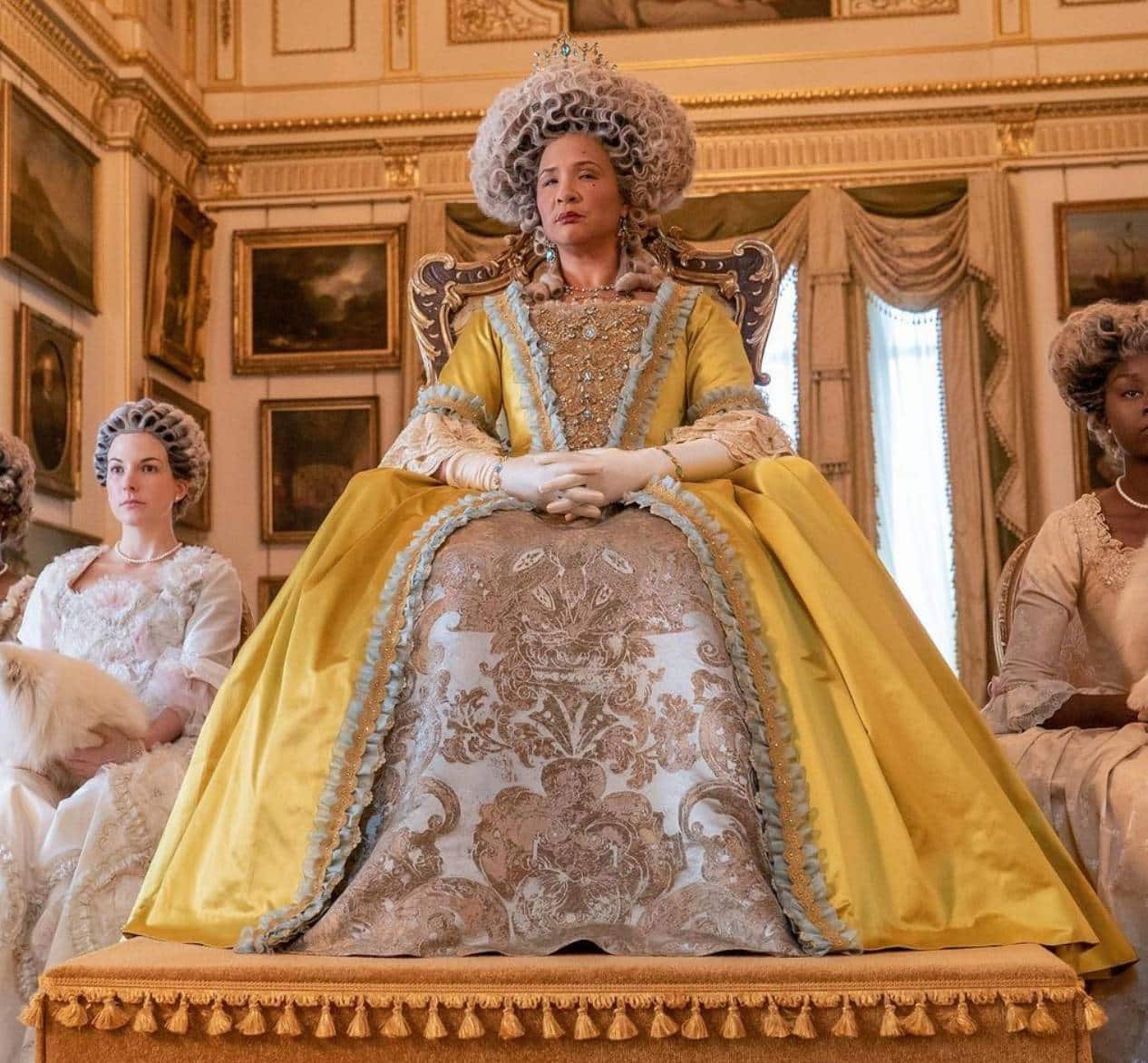 Who will be in the cast of the Bridgerton spinoff?

Although this spinoff will focus on the early years of Queen Charlotte, Rosheuvel has confirmed that she will make an appearance in the show, as will Andoh (Lady Danbury) and Ruth Gemmell (Lady Violet Bridgerton).

Will it be in a flash forward? As a narrating mechanism? In a time machine? We can only wait to see!

As for the younger versions of the characters, India Amarteifio (Sex Education) will play Young Queen Charlotte. According to her character description from Netflix, she comes to London, to wed the mysterious King of England. And here we thought our blind dates were stressful.

Newcomer Arsema Thomas will play Agatha, who we know as Lady Danbury. As per her description, we’ll see her with a much older husband (Cyril Nri as Lord Danbury) using Charlotte’s arrival to find her own way into society, and becoming a guiding light for the new Queen.

When will it be released?

If you’ve already binged Season 2 of Bridgerton and are dying for more, fret not. ProductionWeekly reported that filming for the spinoff began on February 6th and should be wrapped by May 2022.

The show has a few running titles – most notably fitting “Jewels.” So we’re fully expecting the wigs, the fits, the looks to serve.

From here, we’re just manifesting an end of year release date on this Friday’s new moon.

What else do we need to know?

Thanks to Shonda Rhimes’ expanded deal with Netflix, the possibilities are seemingly endless for the world of Bridgerton. Hello, more sexy rain scenes!

We have a feeling that the Queen Charlotte show will only be the start of the spinoffs and origin stories that this series will have to offer.

As of September 2021, the series was listed as the most-watched Netflix Original show. And we can only assume that Netflix feels the same way about views as our dating profile: it needs more.

So BRB while we our phones on Do Not Disturb to binge Bridgerton Season 2…again. We’ll talk soon when we have more Queen C tea to spill. 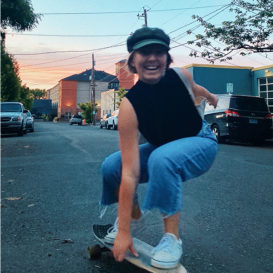 Emma Laurion
Emma is an anthropologically-focused world-traveling storyteller who believes in sustainable development and the power of doing good. You may find her running the streets of Portland or navigating the San Francisco airport on a quick layover.
Connect with her on Instagram or Linkedin.

Latest posts by Emma Laurion (see all)
As an Amazon Associate we earn from qualifying purchases. This post may contain affiliate links from Amazon and other sites that we collect a share of sales from.
986 shares