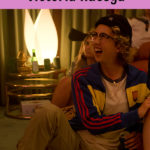 Let’s back up. Instant classic Booksmart is a hilarious Hangover-meets-Superbad-meets-Dazed-and-Confused romp directed by Olivia Wilde, in which overachievers Amy (Kaitlyn Dever) and Molly (Beanie Feldstein) find themselves determined to pack all the fun they never had in high school into the night before graduation. What could possibly go wrong?

In the film, 21 year old Victoria Ruesga plays Ryan, a cheery skateboarder and Amy’s crush. When we first meet Ryan, she skates onto screen through a confetti toss of potato chips in a Deathwish tee… just before skating right into Amy.

It would be the perfect meet cute… if Amy weren’t so shy.

We caught up with Ruesga on the eve of the film’s release to talk skating, how Booksmart became her first acting gig, and LA pizza. Take that, NYC! (Sorry we said that, please just send us some pizza. And maybe some bagels too? They’re awful out there.)

So, about that courthouse…

“I’m not in trouble, just skating. I’m here with one homie. We’ve got the camera out, and just wanted to get a couple clips before he had to go to work today.”

You’ve been skating since you were six and you’re used to skating in front of the camera. What was it like doing that on movie set?

Oh man. It was way different. You can film a trick on your phone like, for Instagram or whatever and that’s great. But, if you’re going to film a real thing, you want VX or a HD camera, like it’s a little bit more advanced.

But the movie camera? That’s a whole ‘nother level of things. Like, if some guy, came into the skate park with that everybody would feel awkward. There was really no comparison between that and skating in the film because out here at most you’d maybe have two cameras on you. But in the movie, there’s like seven.

That scene, they were very free with it. They asked my friend, Mikey Alfred to help out that day. He started out skating but now he works a lot in the movie industry and actually helped on Mid90s.

It was funny. Like, there were these big cameras, like these huge cameras and these super techy guys are just running around in circles chasing me on my skateboard. I thought that was the funniest thing. I probably just skated around for like 15-20 minutes while they chased me with the cameras. It was all whatever I wanted to do.

Is Mikey how you found out about Booksmart role?

Yeah, it was actually. Mikey texted me and I didn’t have his phone number saved at the time. I got a text from a random number that was like, “Hey, I got this audition for you. It’s at this time, at this place and I’m gonna email you script later.”

I was like “No. I’m not answering this text. I’m not going to that address, like they’re probably just gonna be waiting to butcher me there.” So, I just ignored it.

Two thumbs up on keeping both kidneys.

A couple days passed and I happened to check my email and I had an email from Mikey. It was a script. And of course, it was a half an hour before the audition.

I texted him and I was like, “Yo, dude,” just feeling super bad because, he’s like pretty well respected in the industry and I just felt like I trashed his name, you know I just ghosted this audition that he set up for me.

He told me that he screenshotted the text and sent it to casting director Allison Jones, And I guess my text left an impression on her, so she set up the audition for the next day. It was nerve wracking, but I also just thought I was doing a favor for my homie.

What was the most surprising part about being on a movie set?

How they made you feel like royalty. That’s the only thing that I think caught me by surprise. Like, “Do you need this? Do you need that? You want an iced coffee? You want a warm coffee?” That blew me away.

And the director’s chair. I thought that was kind of just like a joke, but there were these big tall chairs everywhere. You needed a seat, someone was there with one. I just thought that was gnarly.

Do you want to keep acting?

Yeah, man. I really love it. I think it’s such a different thing for me. I’d love to take it elsewhere. Maybe do something a little serious.

A few final serious questions. Favorite music to skate to?

It just depends on the mood really. Like, this morning I was just skating to KISS, but yesterday I was skating to Kid Cudi.

Baker 3. Up until Mid90s there wasn’t really a skateboard film that actually caught the culture of skating. There’s been little skate films here and there but they were really cheesy, you know? But, like skate movies? Probably Mid-90s is the best one that’s been made for sure.

And then skate films, like where they’re actually doing skateboarding and full street video parts? Baker 3 for sure, that captures what skateboarding is in its entirety.

Man, the little personal sized little pan pizzas or something from like PizzaRev. The, little small one, put some veggies on there.

Latest posts by Rebecca Swanner (see all)
As an Amazon Associate we earn from qualifying purchases. This post may contain affiliate links from Amazon and other sites that we collect a share of sales from.
158 shares