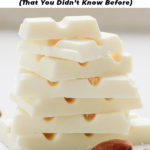 White chocolate is a sweet confection made is typically made by combining cocoa butter, sugar, milk solids, lecithin, and vanilla. Mmm. Delicious.

In our post about ruby chocolate, we mentioned that until 2002 the FDA wouldn’t allow white chocolate to be called “chocolate.” Apparently that raised a few questions — like, “what is white chocolate made of?” and “what makes chocolate chocolate?” and “why is my mouth so full of chocolate right now?” The answer to the last one is that’s what nature intended.

For the others, here’s what you need to know about white chocolate. (Other than it’s delicious in peppermint bark.) 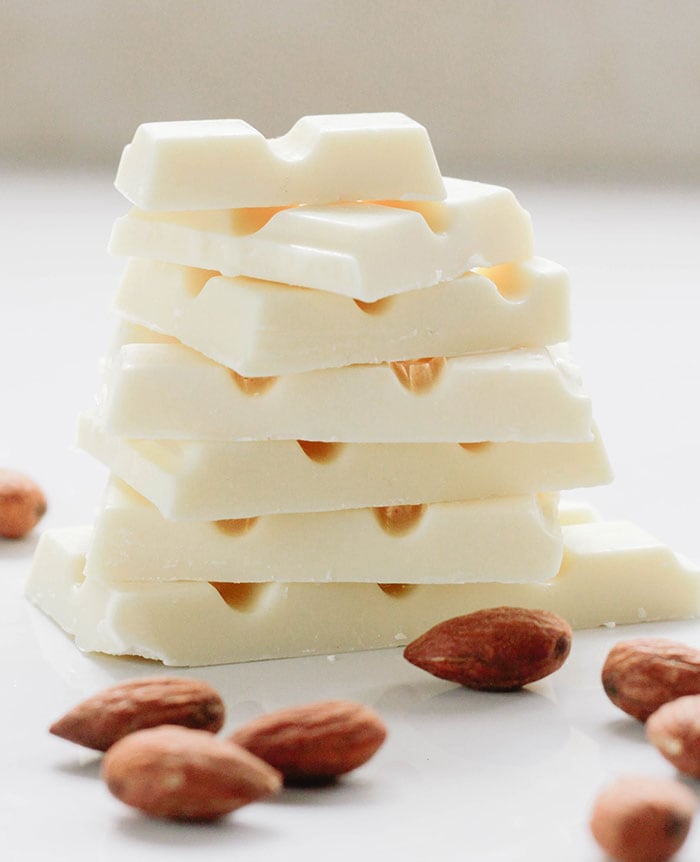 White chocolate is not made from the ghosts of milk chocolate bunnies, like we originally suspected. It is made from cocoa butter, sugar, milk solids, lecithin, and vanilla. And dead bunnies.

And, that’s why white chocolate doesn’t really taste like chocolate. Some people love the unique flavor of white chocolate. Others think it tastes like a mix of butter, old milk, that stick that comes with Fun Dip, and forgotten dreams.

Confused yet? Here’s a breakdown of some chocolate terminology:

WHAT IS THE POINT OF WHITE CHOCOLATE?! IT DOESN’T CONTAIN ANY CHOCOLATE!

Ok, first of all, stop screaming. Second, of all, the FDA agrees with you. Or, rather, it did until 2002 after Hershey and the Chocolate Manufacturers Association of America asked them kindly to change their ways. It’s like we always say, mo’ money mo’ power to rename things.

If you love white chocolate, you really need to try our White Chocolate Cranberry Scones.

Still skeptical? Science says it’s chocolate too: As professor Zaki Berk writes in Food Process Engineering and Technology, chocolate is “a dispersion of solid particles in a continuous matrix of cocoa butter,” with “melting in the mouth” as one of its key properties. White chocolate fits the description. Though, Keanu Reeves probably does too.

Fine. So Who Invented White Chocolate?

Nestlé invented white chocolate. When they were making Nestrovit, the children’s vitamin-enriched milk formula with the catchiest name we’ve ever heard, they added cocoa butter to the mixture to create a solid tablet and white chocolate was born! (National white chocolate day is September 22nd in case you want to get it something for its birthday.)

It wasn’t long until Nestlé realized there was money to be made by selling it without the vitamins, and they  introduced white chocolate candy to the world in 1936 as the Galak Bar or Milkybar. Both are still sold, though any moment now the Galak Bar is going to get yeeted off a cliff by Don Draper.

How Is White Chocolate Made?

The process for making white chocolate is similar to making milk chocolate, dark chocolate, or ruby chocolate — at least at first.

Cacao bean pods are harvested from cacao trees and must be harvested by humans, not machines, since they the beans don’t ripen at the same time.

Most chocolate comes from one of these cacao trees: 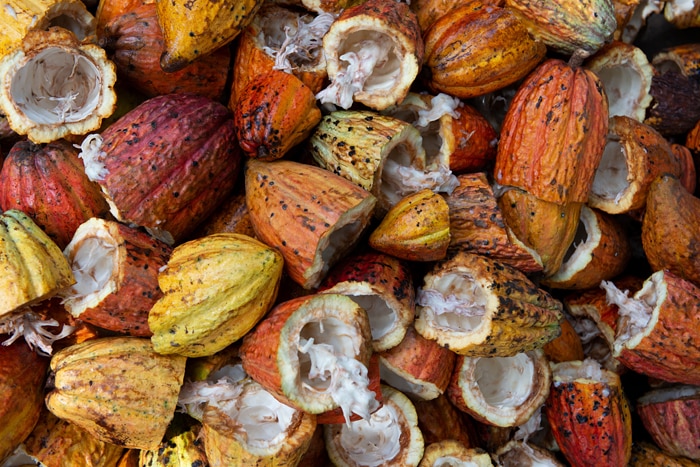 After harvesting the cocoa beans, farmers remove beans from the pods and let them ferment for five to seven days. During the fermentation process, the flavor develops and — through a combination of tropical air and a whole lot of chemistry — the sucrose (sugar) in the beans is converted into glucose and fructose (different types of sugar).

The beans are then dried in the sun and shipped to the chocolate maker.

Cacao beans are then roasted in much the same way coffee beans are, minus the waxed-mustachioed hipsters. Roasting makes it easier to crack open the bean and remove its papery shell, leaving only bits of cocoa bean called “nibs.” These unsweetened nibs can be eaten on their own if you like chocolate for “health reasons.”

The cocoa nibs are ground into a bitter-but-flavorful paste called chocolate liquor — also known as the “essence of the bean.” Cocoa butter can be extracted from the nibs at this stage using a press at this stage.

To make white chocolate, the extracted cocoa butter is then mixed with sugar, vanilla, milk, and lecithin. 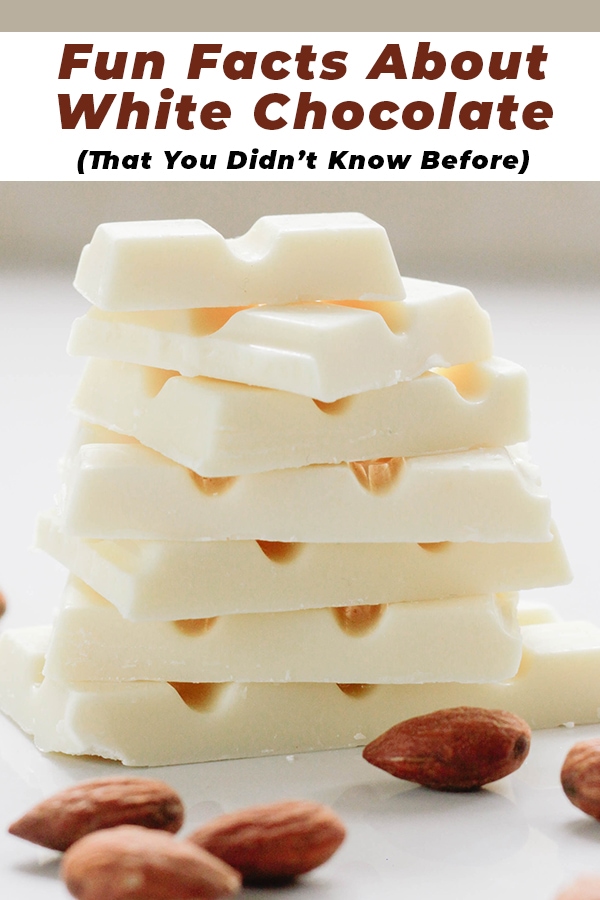 Allison Mick
Allison Mick is an Oakland-based comedian and writer originally from Rochester, NY. She draws from her upbringing and personal experiences to address topics like race, gender, and serial killers. Find her on Twitter as @allison_mick.

Allison's work has been featured in The Hard Times, Macaulay Culkin’s BunnyEars.com, and The Huffington Post. She’s performed at SF Sketchfest, Out of Bounds Fest, and Bird City Comedy Festival. In 1997, she was featured in the book “Humor Works” by Dr. John Morreall, the founder of the International Society for Humor Studies and has managed to stay very grounded despite this wild literary fame.

Latest posts by Allison Mick (see all)
As an Amazon Associate we earn from qualifying purchases. This post may contain affiliate links from Amazon and other sites that we collect a share of sales from.
98 shares