Home » Recipes » Donuts
This post may contain affiliate links that we collect a share of sales from. Click here for more details.
1.5K shares
Jump to Recipe

When it comes to fall flavors, chai is one of my favorites. And this year, it seems to be everywhere! I created these Chai Baked Donuts with a Vanilla Cinnamon Glaze. They’re a little bit savory, a little bit sweet, and oh so fall. I think you’ll love them! 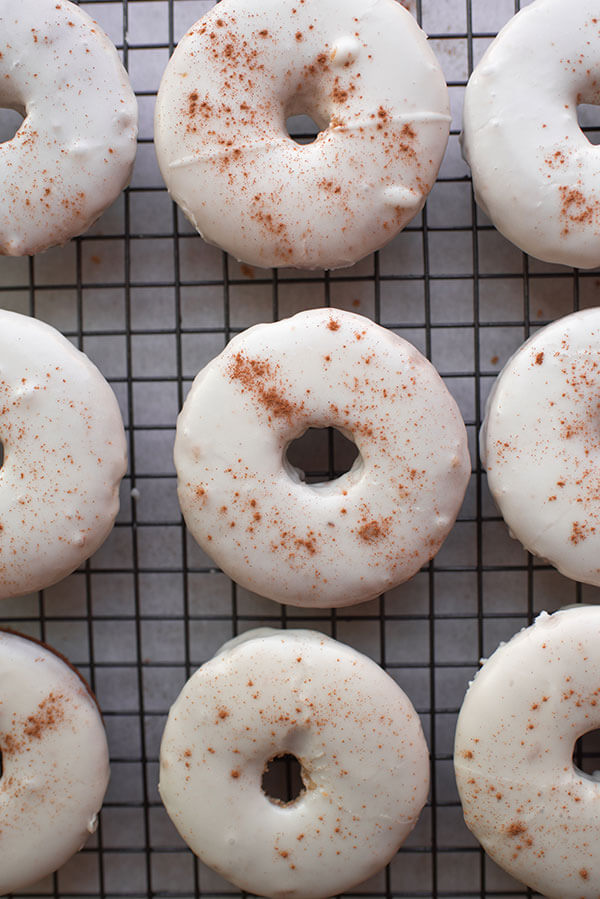 Chai, which to most Americans (and myself) conjures up this a sweet milky beverage flavored with warming cardamom and other spices, just means “tea” in Hindi. Yep, that means “Chai tea” means “tea tea.” The chai that we’re familiar with would be called masala chai in India, and there are many ways of making it!

And, while a chai latte is delicious on a cold day — in fact, I didn’t drink coffee until I was about 30, so when I’d go out with friends to coffeeshops, I’d usually get chai — but there’s so many other ways to enjoy chai flavor. Like in donuts.

Because it seems that chai is making a serious comeback. For years, coffee was all the buzz (and hey, for good reason!) but this year, it seems chai is making a run for the spotlight. Starbucks just launched a Pumpkin Spice Chai Latte — let me know what you think of it in the comments! — and Avery Brewing just launched their seasonal Chai High, a brown ale brewed with Bhakti Chai tea. Ready to make some Chai Baked Donuts and get in on the trend? Let’s do it!

How to Make Chai Donuts

I was having a bit of a stressful week and weekend (almost my entire family was somewhere in Hurricane Irma’s path), and I was looking for something to bake. The recipe for a Chai-Spiced Bundt Cake on the King Arthur Flour popped up on my Facebook wall, and I was like, yup, that’s it. So I made it. Well, sorta. Like every baker, I tweaked it a bit… and turned the recipe into Chai Baked Donuts with a vanilla cinnamon glaze.

What I love about this Chai Baked Donut recipe is that it’s involved enough to distract you from whatever else is going on outside the kitchen, but not involved enough so it’s stressful as a recipe itself. I find that a stand mixer always makes things easier (or at least less messy), but it’s not a must for this. As long as you have a mixer and two donut pans, you can make this recipe. Other tools (a round piping tip, a piping bag, and a fun spatula) will of course make it easier, but they’re not a must if you’re a MacGyver at doing that whole this isn’t a real piping bag but look how well I’m piping with it thing. For me, that just means the floor, myself, and probably the cat are all covered in icing. So, it’s all real piping bags for me. 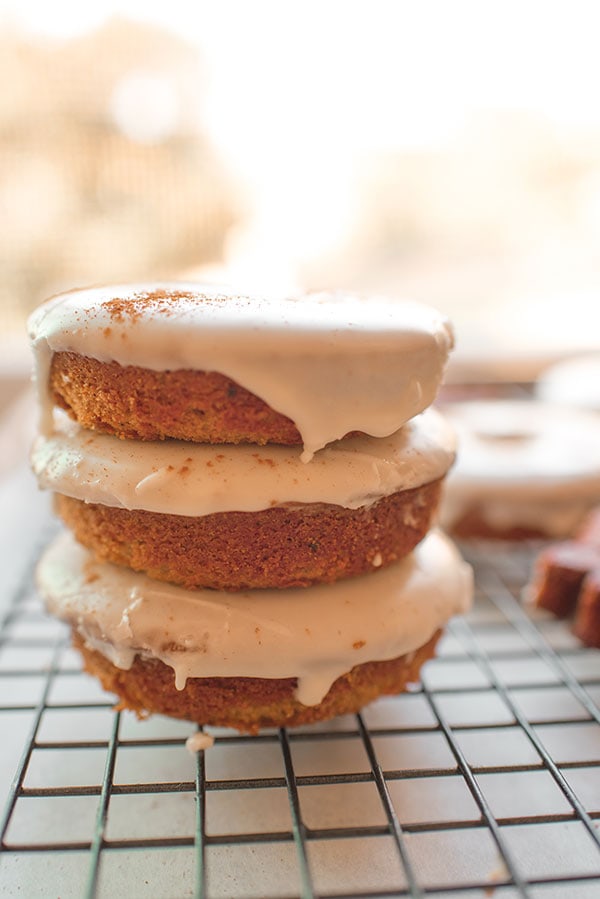 To make the Chai Donuts, preheat the oven to 350°F and create the chai spice mix. Adjust the spiced in the chai mix to your liking (add a little more ginger or cinnamon or even a pinch of cloves), and then add 3 tablespoons of the mixture to a small bowl. To this bowl stir in the flour, baking powder, baking soda, and salt. Set the bowl aside. In another small bowl, combine heavy cream, Greek yogurt, and vanilla. Set this bowl aside. Add butter, sugar, and honey to the bowl of your stand mixer and beat on medium speed until lighter in color. Add the first egg. Let the mixer run for about a minute before adding the second. Add the flour mixture and let this mix on low until combined.Then add the heavy cream mixture and mix on low until combined.

Once your Chai Baked Donut batter is ready, scrape down the sides and transfer the mixture to a piping bag fitted with a round piping tip. Pipe the mixture into a nonstick donut pan sprayed with nonstick spray and bake for 10-15 minutes or until it bounces back just a little. Let the pan of baked donuts cool on a baking rack for 5 minutes, then carefully remove and let cool fully on the baking rack. I found that they stuck a bit to the pan, so you might want to consider oiling and flouring the pan. I’m going to give them another go to see if I can figure out how to get them to not stick at all. If you find a way, let me know!

Also, the recipe makes 18 baked donuts, but I didn’t have three donut pans, so I baked maple leaf cakes by piping the batter into a fall-themed whoopie pie baking pan.

Once the baked Chai Donuts are fully cooled, top them with the Vanilla Cinnamon Glaze! Looking for more donuts? Try these S’mores Baked Donuts or these Red Velvet Donuts! 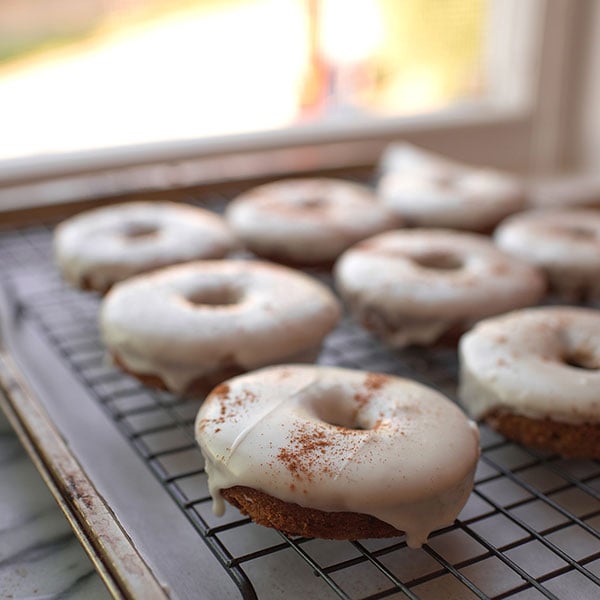 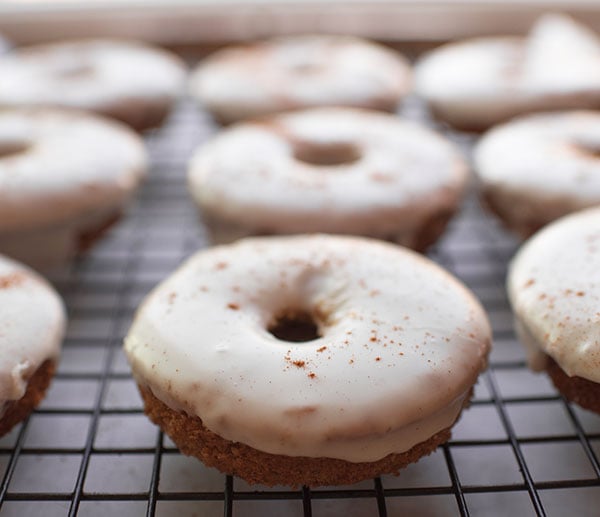 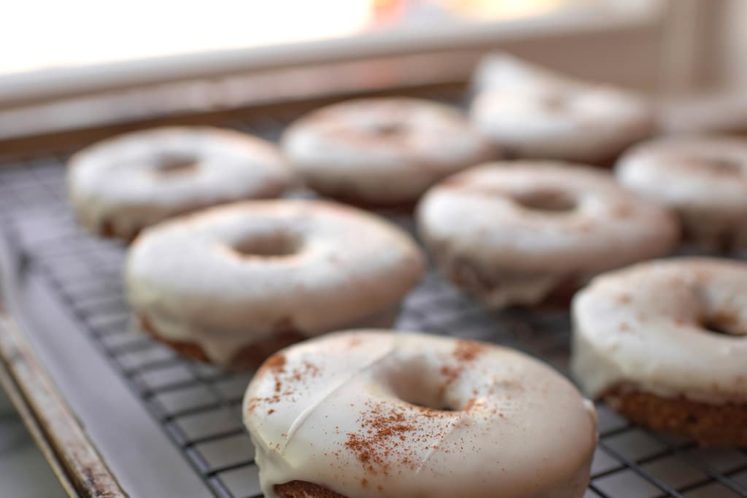