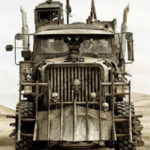 Everyone has that thing they spend money on but probably don’t need to. Maybe that’s a morning latte. Or avocado toast. Or movie props. Or, if you’re like me, all three.

So, when I saw that the cars from Mad Max: Fury Road are coming up for auction at Lloyds on September 26th, I had to take a look. Not that there’s room in my garage — or let’s be honest, budget — for the Sabre Tooth or the War Rig. But there might be at your Burning Man camp!

So here are my tips on how to buy movie props, plus a look at the 13 cars coming up at auction that will make the Furiosa inside of you jump for joy as you speed across town to the grocery store. What, you missed that post-credits scene? 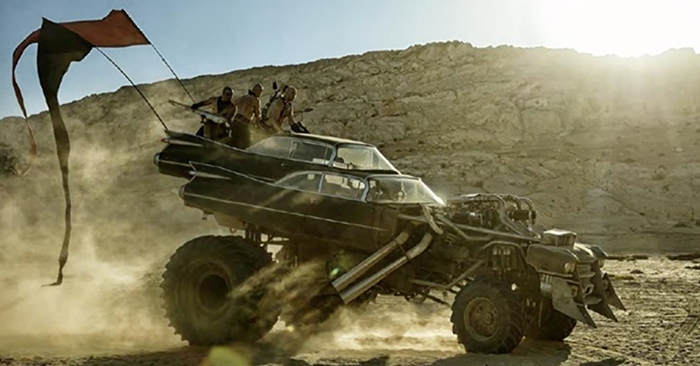 How Do I Buy Movie Props?

I first got into purchasing props when I was looking for a gift for my dad. He’s a big Star Trek fan, totally unlike all men who grew up in the ’60s.

I discovered that buying a portion of a ship or an actual prop from the TV show from one of the movies was not all that much more expensive than buying a well-made replica. If only the same could be said for lawn mowers.

1. Go to a Legitimate Auction House

I don’t recommend buying movie props off Craigslist. You could end up with the real deal, but the odds are not in your favor and your name isn’t Katniss. Instead, go to Prop Store, Premiere Props, iCollector, or one of the major houses like Sotheby’s or Christie’s.

2. Get Approved the Auction House

Before can bid, you need to be approved by the auction house. This happens pretty quickly, but they might not be able to approve you day of. So you’ll want to do some planning provide them with your payment method ahead of time. Don’t look at us like that. If you can pick out your brunch outfit three days in advance, you can do this.

3. Schedule Time to Bid or Place an Absentee Bid Ahead of Time

Auctions move very fast. Most items are only up on the block for a minute or two, sometimes less. So far, I’ve had the most luck bidding in real time, but that’s not always possible. Sometimes those afternoon naps really get away from you.

4. Be Prepared to Pay a Little Extra

When it comes to purchasing props (or anything else at auction), there’s one more thing to keep in mind. The markup. If you buy Kate Beckinsale’s stunt double’s Underworld costume for your next Halloween party or nephew’s christening, it’ll set you back:

How Do I Get One of the Mad Max: Fury Road Cars?

Essentially just follow the steps listed above. Although it looks like you’ll have to call or, for all of us allergic to talking on the phone, text Frank Cheney at Lloyds in Australia at 0498 MAD MAX (+61 498 623 629) instead of bidding online.

They haven’t yet disclosed the buyer premium for the cars, but they are taking cryptocurrency if you have a bunch of Doge you want to unload. Can’t imagine who would be in that situation…

Incredible. The cars from Mad Max: Fury Road are being auctioned off.

I want to pick up groceries in the War Rig. https://t.co/jqh6T69G4p pic.twitter.com/ljnPu62bLC

The Mad Max Cars Up for Auction

“A pair of 1959 Cadillac Coupe de Villes in flagrante delicto are split, widened and mounted one to the other, pitched at a rakish angle by huge double rear wheels and powered by twin V8’s slaved to a handmade gearbox capable of harnessing and harmonizing the ultimate power of the ultimate leader.”

“Beaten and polished, stripped and shining, straddling an extended rear diff and double rear wheels, the Buick is the standard bearer and personal guard for the The Gigahorse and Immortan Joe. A back up crew of trusted War Boys hunker close by to supply cover fire from a slew-ring turret and anti-aircraft gun, ever ready to make the leap as reinforcement or retaliation.”

“Mutant lovechild of semi-trailer and hot rod, twin V8’s end-to-end, 6 wheel-drive, eighteen-wheeled leviathan charged with the barter of fluids and firearms that binds the three city-states of the Wasteland in tenuous alliance. She (and ‘she’ she most definitely is) bestrides the Fury Road, a beast of war as much a beast of burden, piloted by the most trusted warrior and heralded driver of the Citadel, Furiosa.”

“Every army has a little drummer boy, to keep the beat and stir the heart, and the War Boys of the Wasteland are no exception. Here, mounted drummers pound a taiko beat on huge resonators built of aircon duct, while Coma The Doof Warrior, blind and disfigured, slung in a web of bungy and spread-eagled before a stack of speakers, hurtles across the desert landscape on a repurposed 8 x 8 M.A.N. missile-carrier.”

“Recently salvaged along with the full-life Max, the XB Interceptor has been resurrected in the crucible of the Citadel, jacked up on off-road rails and supersized wheels, double-aspirated V8 blower now topped by skull sucking air into Scott Hat as Slit sits atop the shiny-chrome assassin, jockeying hundreds of horsepower and a handful of hate down mankind’s final straight to a finishing line ever closer and ever more … final.” 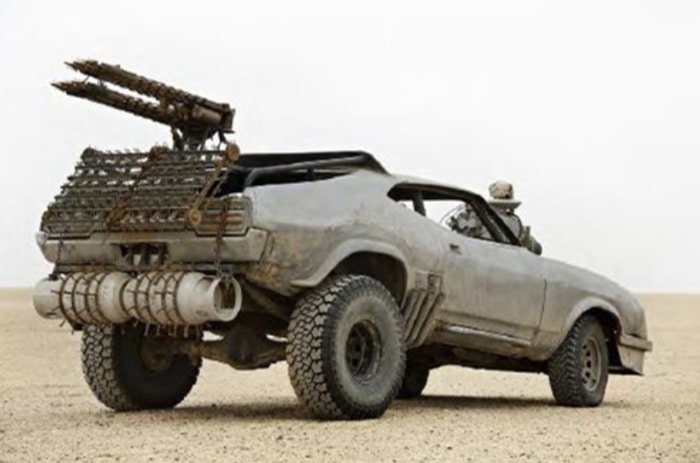 “A super-turbocharged, nitrous-boosted 5-window Deuce Coupe. This vehicle is every hotrodders’ dream and the perfect chariot for young Nux, a true believer and gun driver in the Citadel Armada who puts the fun back in fundamental and whose failing flesh fetishizes the fury and power of the V8 he hopes will lead him to Valhalla.”

“A pair of GMC 6’s slung end-to-end on the extended chassis rails of a 3-window Coupe make for the guttural rumbling of a V12. With nitrous injection and a single gunner keeping the power to weight ratio way down Elvis earns his place as the hi-speed outrider of the War Rig convoy, the heartbeat of barter on the Fury Road.”

“The sandblasted and shiny chassis speaks of construction once upon a time in GasTown, but it has now found fame as part of Furiosa’s convoy: such is recycling in the shifting sands of the Wasteland.” 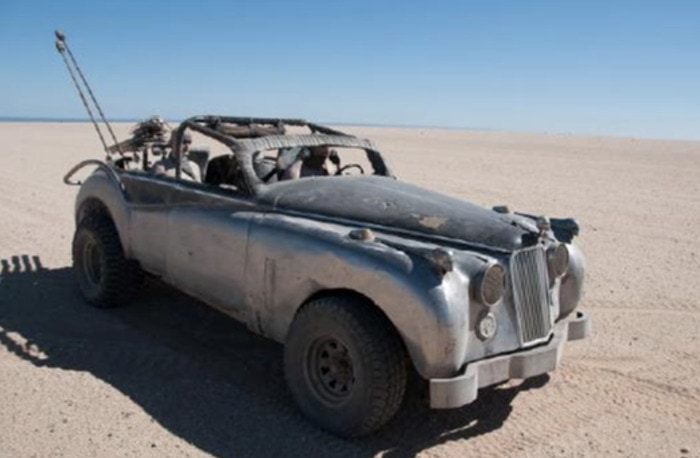 “A 1956 Pontiac Custom Safari 2-door wagon stripped and chop-topped to accommodate a 20’ pole welded to a V8 engine block as counterweight for aerial gymnastics.”

“A repurposed F250 tow truck, sporting a massive harpoon for lassoing quarry, and a vicious pair of steel ‘teeth’ to bite into the earth and slow a victim’s vehicle until the coup de grace could be delivered by the rest of the Bulletfarm alumni.” 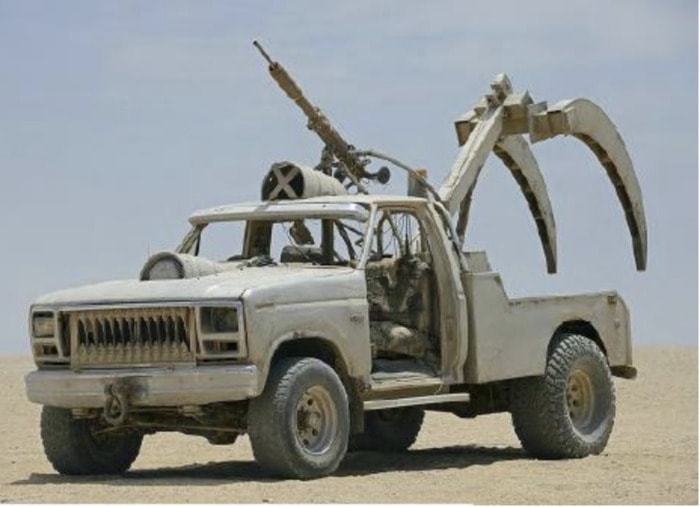 “The premier Fire Car of the Citadel, a flame-throwing attack dog ‘liberated’ from Gastown, pitched in the Citadel’s black livery and pressed into service in the great chase. An old school Hot Rod, aspirated a Roots blower mounted low ahead of the radiator, sucking in air and dust in near equal proportion and therefore sporting the second-to-last pair of pantyhose in Christendom as a filter.” 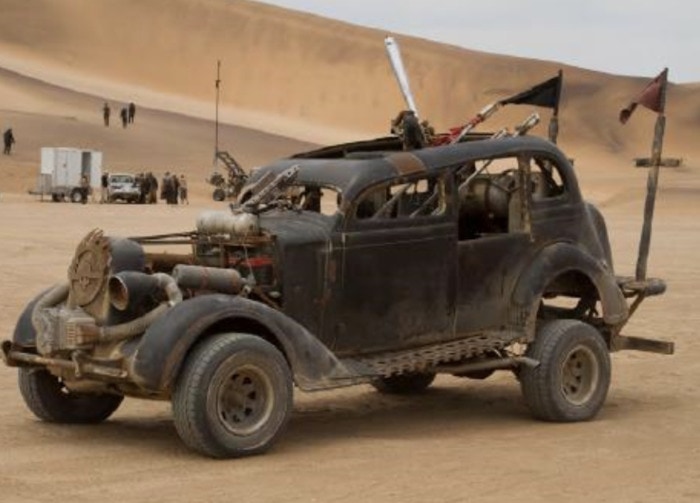 “This Gas-guzzling yank tank offers space aplenty as it carries a multitude of warriors into battle, caltrops and shotguns to the rear, mounted machine gun front and center; the bonnet sports a medieval bas-relief of dancing Death, the drivers’ door a scorecard of partners in that particular dance.”

“Just enough parts leftover from a real car to fashion this pint-sized but powerful pirate, a radically chop-topped, cut and shunted Chevrolet solo symphony for single driver and sub-machine gun.”

Latest posts by Rebecca Swanner (see all)
As an Amazon Associate we earn from qualifying purchases. This post may contain affiliate links from Amazon and other sites that we collect a share of sales from.
34 shares