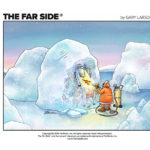 The Far Side comics are finally online! And, there might be new ones! And the world needs this now more than ever! And we need more coffee!

After 25 years of silence, Gary Larson, creator of The Far Side comic strip, poked his head into the Internet this week to let everyone know he’s still alive and he’s coming back (sort of). TheFarSide.com officially launched on December 17, giving old, new, and soon-to-be fans a reason to rejoice.

What Was the Far Side?

The Far Side was a single panel comic created by Gary Larson. It ran in newspapers from December 31, 1979 until January 1, 1995. It delivered a quick daily jolt of clever, absurdist humor that confused and delighted. The jokes were fast and often abstract, and you either “got it” or you didn’t. It was like an online meme – only original and better looking.

There was nothing else like it. While Garfield complained about Mondays and Dagwood took a nap, The Far Side made jokes about world annihilation, vegetarian cannibals and cows… so many cows.

So, while you might be all OK Boomer right now, it was actually a Boomer who created the first memes.

Larson’s art style was as baffling as the jokes. Everything about the comic screamed, “Something’s wrong!” Kind of like we do after we open  Twitter every morning.

Call it magical realism, call it weird, call it whatever you want, The Far Side’s brand of strange comedy paved the way for The Simpsons, Arrested Development, Rick and Morty, and 98% of all internet comedy.

It wasn’t political. It wasn’t topical. It was a pure escape from reality that involved cat fud. It was inspiring. It was wonderful.

And then it was gone.

Where Can I Read the Far Side Comics Online?

TheFarSide.com is the new digital home of Gary Larson’s creation. But why has it taken so long for Larson to warm up to the idea of online distribution?

Until now, if you wanted to legally read Far Side comics, you either had to buy the print collections, fix up the DeLorean in the garage, or visit any office cubicle to read the popular desk calendars. So why the change?

In a letter published on the site, the usually shy and quiet Larson explains, “My change of heart on this has been due not only to some evolution in my own thinking, but also in two areas I’ve always cared about when it comes to this computer/Internet ‘stuff’: security and graphics.”

Though he admits, “Russians could get inside this thing and start messing with my captions,” the website offers a safe place to post his own “stuff” and with a visual fidelity that makes even fine artists happy.

Another reason for the return is one of practically. The Internet is giving us everything, all the time and unless creators take control of their content, the online community will find “unofficial” ways to share things. (That’s lawyer speak for illegal!)

“Trying to exert some control over my cartoons has always been an uphill slog,” wrote Larson. “And I’ve sometimes wondered if my absence from the Web may have inadvertently fueled someone’s belief my cartoons were up for grabs. They’re not.”

Will There Be New Far Side Strips? More Cows?

Will this new site bring us new Far Side comic strips? Maybe.

While the main purpose of the new site is to release and curate the existing Far Side archive, the website hints that there may be brand new comics coming in 2020. And that’s enough for fans to shoot cereal milk out of their noses. (Full disclosure: we already did.)

It may be a slow process, but Larson is, understandably, taking things slowly. The thought of new strips in the New Year has us giggling already, but we don’t want to scare Larson back into his hole. Like a cat in a new home, give him time to feel things and when he’s comfortable he’ll leap into your lap.

We’ll be here knitting up a new afghan while we wait.

Latest posts by Dan Bergstein (see all)
As an Amazon Associate we earn from qualifying purchases. This post may contain affiliate links from Amazon and other sites that we collect a share of sales from.
407 shares