Home » Recipes » Cupcakes
This post may contain affiliate links that we collect a share of sales from. Click here for more details.
599 shares
Jump to Recipe 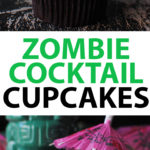 Scroll for the story and the zombie cocktail recipe or skip to the zombie cupcake recipe! 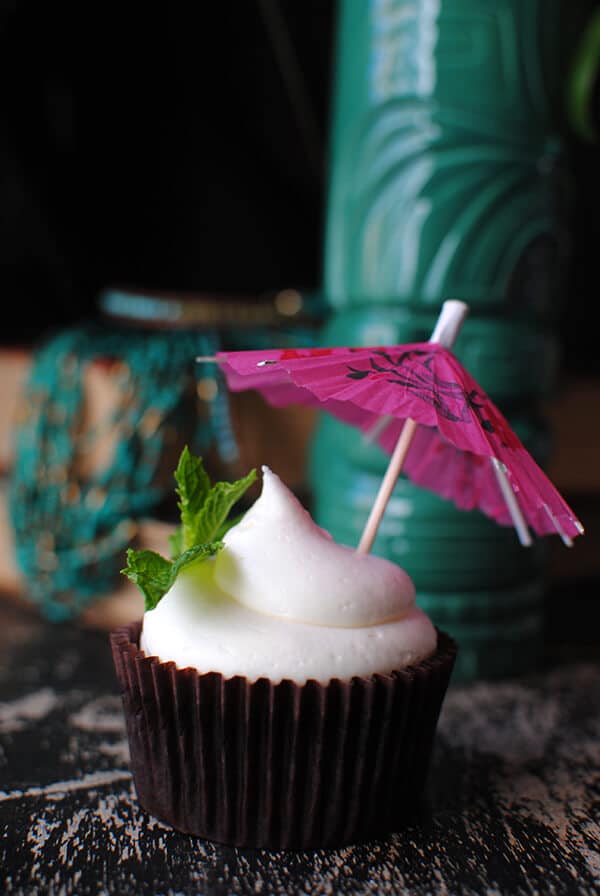 In 1934, at a Polynesian-themed restaurant in Los Angeles, a Texan by the name of Ernest Raymond Beaumont Gantt, invented the Zombie. Or, as the better known version of the story goes, in 1934 Donn Beach invented the Zombie cocktail at his Tiki restaurant Don the Beachcomber in Hollywood, California. Both versions are true. And, at least as far as history is concerned, Beach is also, reportedly, responsible for creating most of the tropical drinks we know today, including the Mai Tai.

I love a perfectly-made, subtle cocktail. And there are plenty of fantastic places here in LA where I can enjoy those (the Raymond 1886 in Pasadena, the Chestnut Club in Santa Monica, the Corner Door – and wherever Beau duBois goes after this as he’s a cocktail genius.). But, sometimes, an over-the-top rum cocktail fitted with all sorts of garnishes is just the thing. And then, I go to a tiki bar.

One of my all-time favorite tiki bars is the Zombie Hut in Brooklyn. But, I have to be honest, I really preferred it before they moved locations. Their original location in Carroll Gardens was dimly-lit, island-inspired, and atmospheric as all getout. Though you didn’t really want to sit on the couches for fear something might crawl on you. And that’s where I had my first Zombie. Their version came frozen with a shot of 151 in the straw. And you were only allowed two. (This is a general bartender rule with Zombie cocktails, but I don’t think I’d be able to stand after two anyway.) It was strong and tart and all sorts of delicious. Their new location had giant flatscreen TVs. Enough said.

I hear there’s a good zombie drink at Disneyland, though I don’t know which is better: the secret menu one at the Cove Bar or the one at Trader Sam’s Enchanted Tiki Bar. Let me know in the comments if you’ve tried either! I do know Trader Sam’s has a rad shrunken head Tiki mug for their Zombie drink. 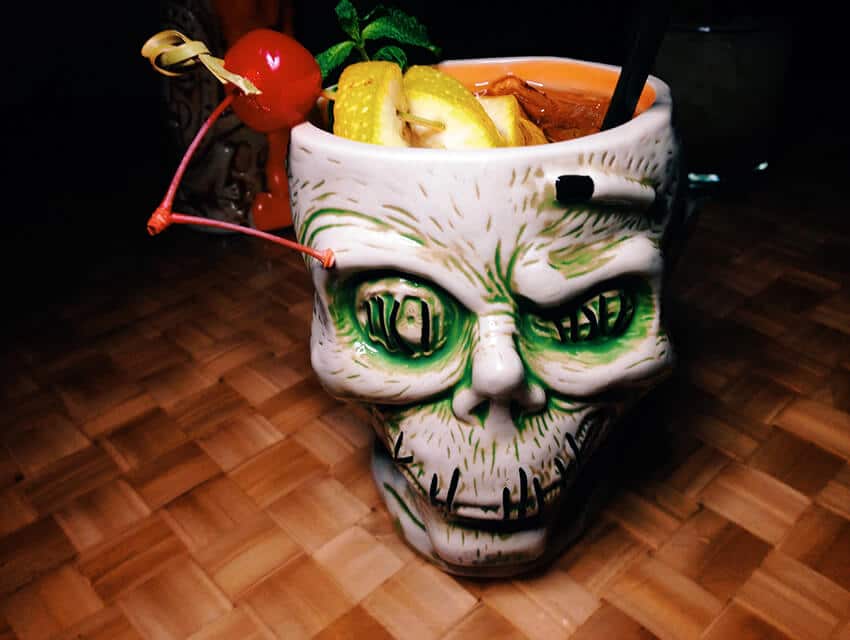 How to Make a Zombie Cocktail

This is where the creating the Zombie Cupcakes got fun. There are many different recipes for the Zombie drink out there and many zombie cocktails has different ingredients. That’s because Donn was super secretive about his cocktail recipes. So that his employees (or other bar owners posing as patrons) wouldn’t steal his recipes, he premixed his spices and mixes and numbered the bottles. According to an interview tiki expert and author Jeff “Beachbum” Berry did with the New York Times, “His recipes were all in code. So a recipe might say one half-ounce of number two, a dash of number four.”

But, thanks to the work Berry did uncovering the coveted, closely-guarded secret Zombie cocktail recipe, I was able to recreate it in Zombie cupcake form.

Blend with ice, pour into a mug, add ice, and garnish with mint. 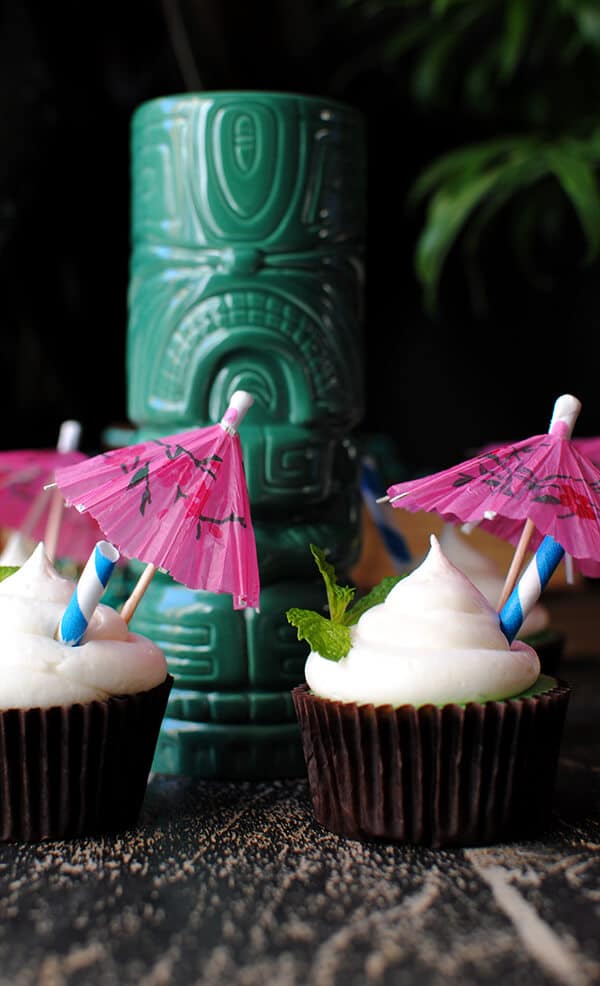 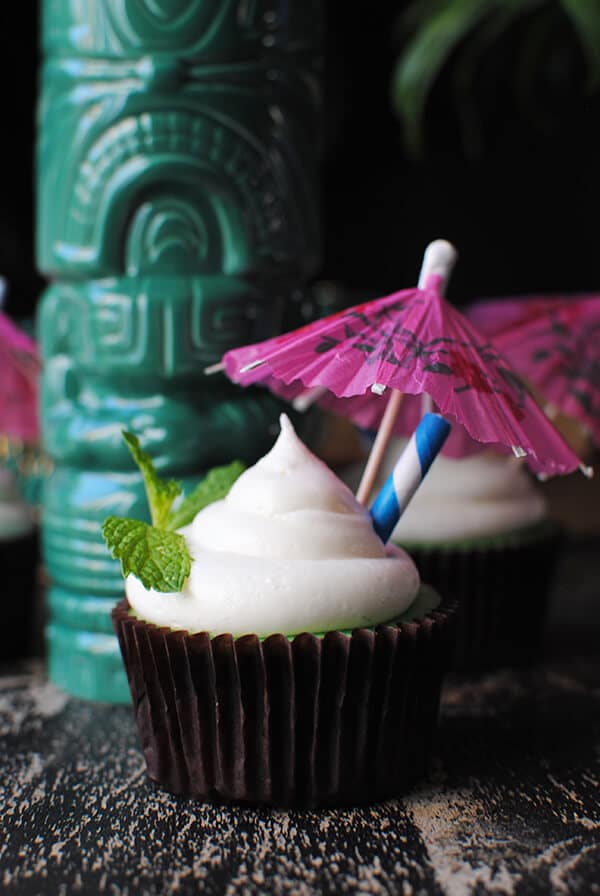 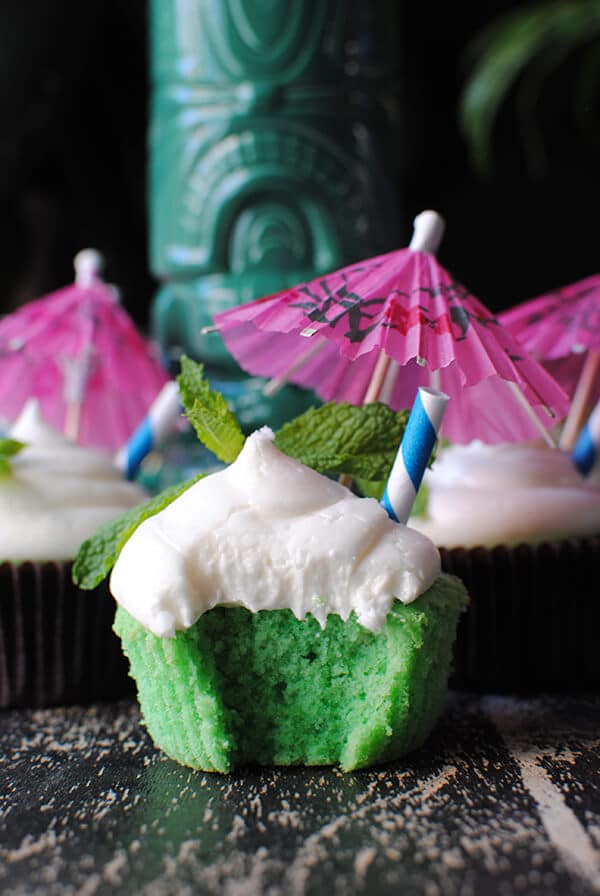 How to Make a Zombie Cupcake

Now that I had the recipe, I had to go about turning this zombie cocktail into a zombie cupcake. And not one that just tasted like rum. To create the cupcake, I first converted the non-rum ingredients (the grenadine, bitters, grapefruit, cinnamon syrup, lime juice, and falernum) into teaspoons to get a sense of how much liquid there was going to be in this cupcake.

I then combined all of the ingredients (swapping grenadine for maraschino cherry syrup since I had some leftover from the Pina Colada cupcakes) and added crushed fennel seeds in place of Pernod to give the mixture a hint of anise flavor and cinnamon instead of cinnamon syrup. I toned down the cinnamon so it wouldn’t overpower the other flavors and added a splash (1/2 tsp.) of gold rum.

I set the mixture aside and started mixing together my go-to cupcake recipe. After adding the wet and dry mixtures, I added the zombie liquid and tasted the batter. To help the zombie flavor come through, I added more bitters, lime, and grapefruit juice. Then I baked them, frosted them with a grapefruit and lime frosting (for that 151-in-the-straw zing!) and, voila! Sweet, tart, Zombie Cupcakes!

Enjoy them at your next tiki party or bake them for Halloween and add a fun scary frosting design on top!

5 from 3 votes
Print Recipe
If you love zombie cocktails, or just tiki drinks in general, bake up these zombie cupcakes! 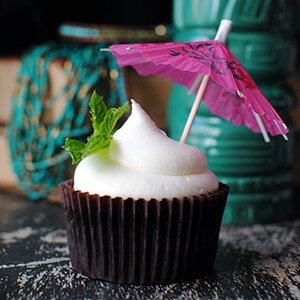 Nutrition Facts
Zombie Cupcakes
Amount Per Serving (1 cupcake)
Calories 333
* Percent Daily Values are based on a 2000 calorie diet.
Course: Dessert
Cuisine: American
Keyword: zombie cupcakes
Author: Let's Eat Cake
Did you make this recipe?Leave a review below, then take a photo and tag @letseatcakeblog on Instagram so we can see it!

Oh, and if you’re curious what things looked like behind-the-scenes for this shoot… 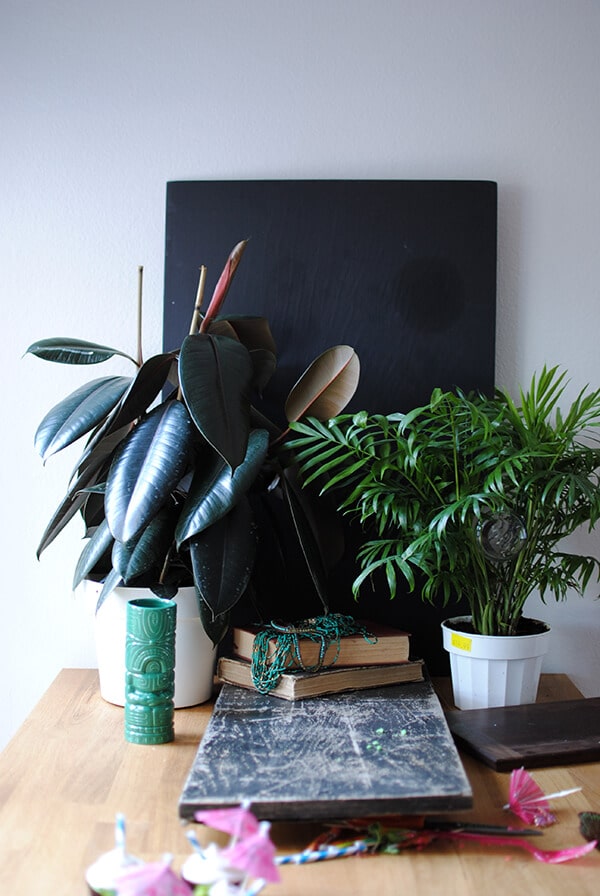 Latest posts by Rebecca Swanner (see all)
As an Amazon Associate we earn from qualifying purchases. This post may contain affiliate links from Amazon and other sites that we collect a share of sales from.
599 shares