Home » Food + Drink » Drinks
This post may contain affiliate links that we collect a share of sales from. Click here for more details.
97 shares
Jump to Recipe 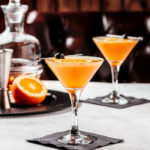 The Blood and Sand is a scotch-based cocktail that was invented in the 1920s.

The divisive drink is known for the reddish color it gets from Heering cherry liqueur — which we’re guessing is the “blood.” The “sand” is orange juice, which is all to say: things were pretty weird in the 1920’s. 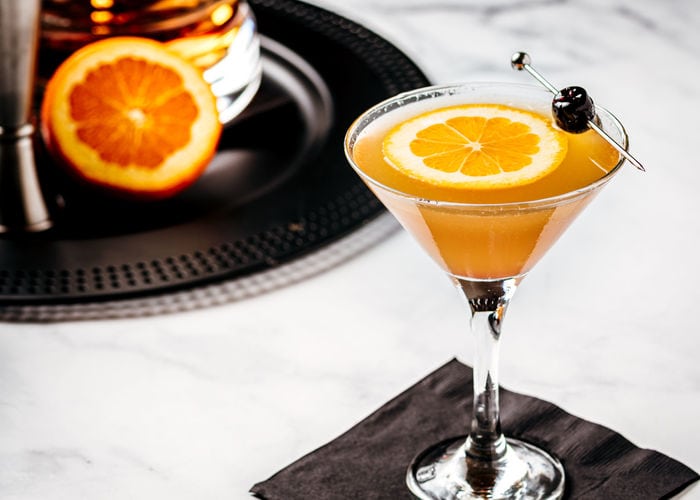 The drink is gets its name from the 1922 silent bullfighter movie Blood and Sand. The film stars Rudolph Valentino, the sultry romantic leading man of his day. Think Ryan Reynolds, but silent.

Fans of the cocktail say if you mix it correctly using the original cherry Heering, the ruby-toned cocktail is a fine blend of smoky and sweet. Haters say it’s a waste of single malt Scotch whiskey! The original recipe first appeared in the 1930 Savoy Cocktail Book. And now it’s also below so you can decide for yourself! 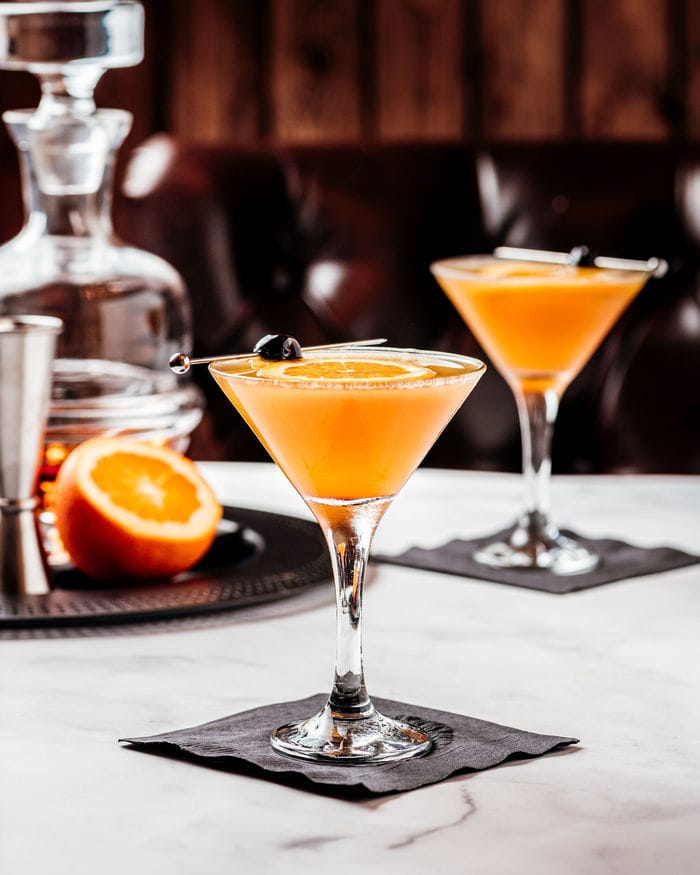 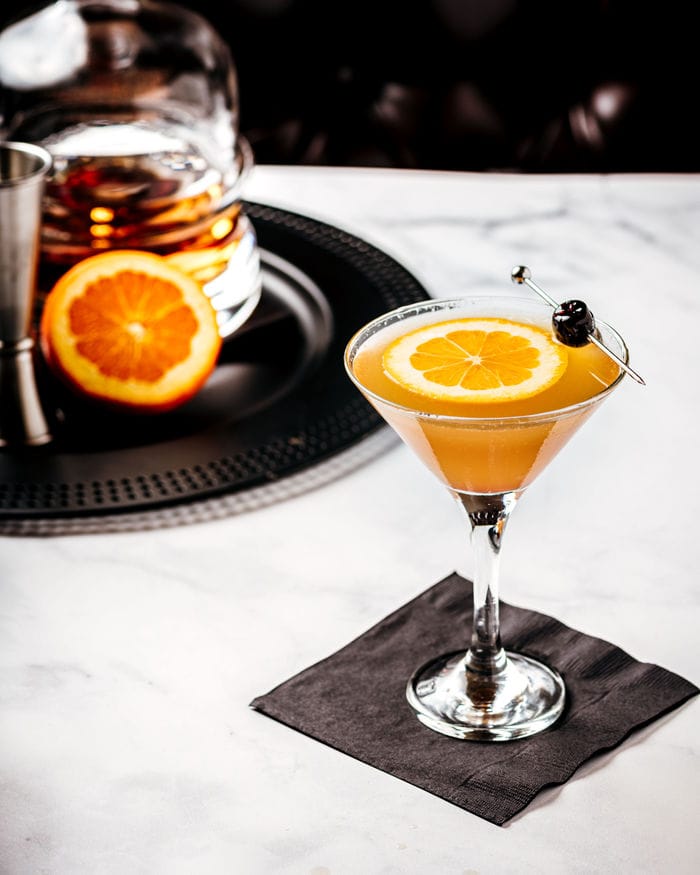 How to Make the Blood and Sand

Blood and Sand Variations You Could Try

You’ll either love it or hate this cocktail. Some say the Blood and Sand tastes too much like a screwdriver, blaming the equal parts everything in the drink and their college flashbacks. If you’re one of these people, drink something else or try one of the following variations: 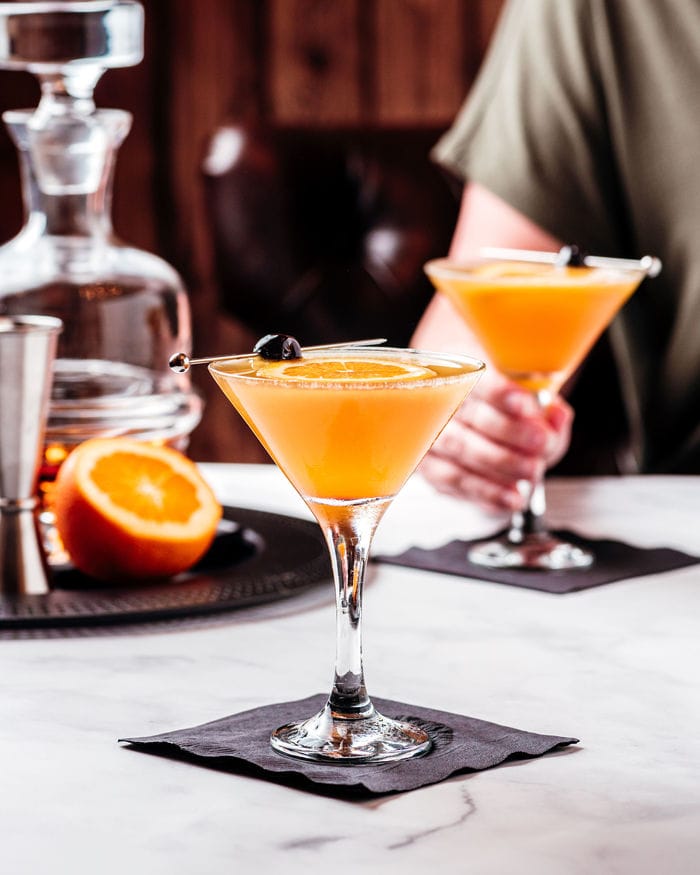 Just How Strong Is This Cocktail?

This drinks isn’t super strong, at least compared to other cocktails. Regardless of which substitute you use for the orange juice, according to this calculator, your Blood and Sand should come out to only about a shot and a half or 20% alcohol by volume (32 proof), which is about the same as a whiskey sour. That’s because while it has 2.25 ounces of alcohol, vermouth and cherry liqueur are relatively low in alcohol content.

How Long Should I Be Shaking This Thing?

The longer you shake, the better your Blood and Sand will taste. Shake it like your mama gave ya, or like a Polaroid picture, or like you’re waking the Valentino from the dead.

3.34 from 3 votes
Print Recipe
The Blood and Sand is a scotch-based cocktail that was invented in the 1920s. It’s known for the reddish color it gets from Heering cherry liqueur. 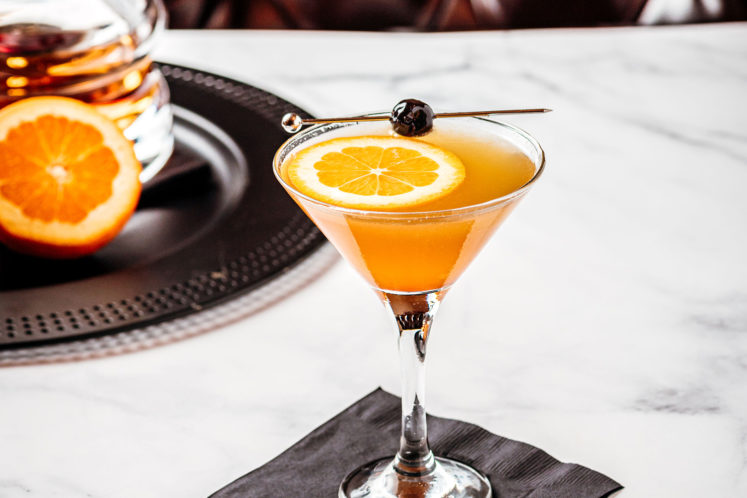 Nutrition Facts
Blood and Sand
Amount Per Serving (1 cocktail)
Calories 162
* Percent Daily Values are based on a 2000 calorie diet.
Course: Drinks
Cuisine: American
Keyword: blood and sand
Author: Katie Schindelheim
Did you make this recipe?Leave a review below, then take a photo and tag @letseatcakeblog on Instagram so we can see it!

Cocktail images by Angela Persicke of Cooking with Wine.

Latest posts by Katie Schindelheim (see all)
As an Amazon Associate we earn from qualifying purchases. This post may contain affiliate links from Amazon and other sites that we collect a share of sales from.
97 shares