Home » Recipes » No-Bake Desserts
This post may contain affiliate links that we collect a share of sales from. Click here for more details.
739 shares
Jump to Recipe 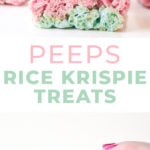 My favorite thing about Peeps is heating them up in the microwave until they almost pop. I don’t tend to do this with the bunny ones, but the duck ones? Oh yes, right in the microwave you go.

But, turns out they have one more use… making a great Rice Krispie Treats recipe! And, if you really don’t want to use the store-bought ones, you can swap them out for 10 ounces of mini marshmallows (that’s a little more than half the bag) or make your own Peeps, like Phillip of Southern Fatty does here. For better or worse, finding them shouldn’t be an issue as they marshmallows are now available in various figures year-round.

I used to love making Rice Krispie Treats as a kid and I even used to eat the cereal in college (yes, the one with the pre-formed treats) even though everyone thought it was gross. It was not. They were wrong.

Now the back-of-the-box recipe is good. But this is even better. To take this recipe to the next level, in addition to swapping out the regular mallows for sugar-coasted marshmallows, I browned the butter and added pure vanilla extract. It’s just as simple (trust me, browning butter isn’t tough), but the changes make this after-school snack simply amazing.

For another great Easter recipe, try my Italian Easter Bread!

After browning the butter, place half of your blue Peeps in a microwave-friendly bowl and heat them for 45 seconds. Let them rest, and heat them for another 30 seconds. Spray your spatula with cooking spray and pour half the butter and 1/2 tsp. vanilla on top. Mix until combined. 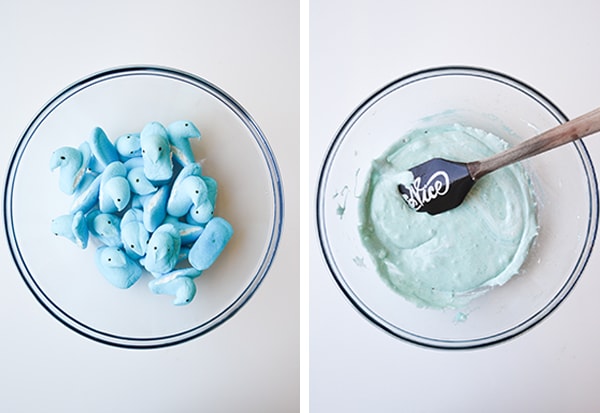 Add 3 cups of Rice Krispie cereal. Spray your spatula and stir until combined. Spray your hands and gently press them into the pan. 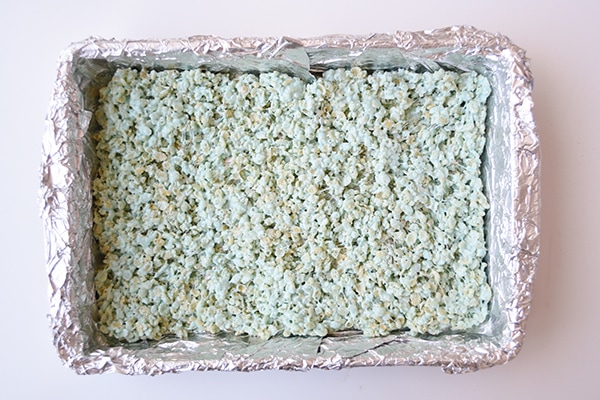 Repeat the process with the pink Peeps (you’ll notice some are a different color below – that’s because I was able to find COTTON CANDY ones!) 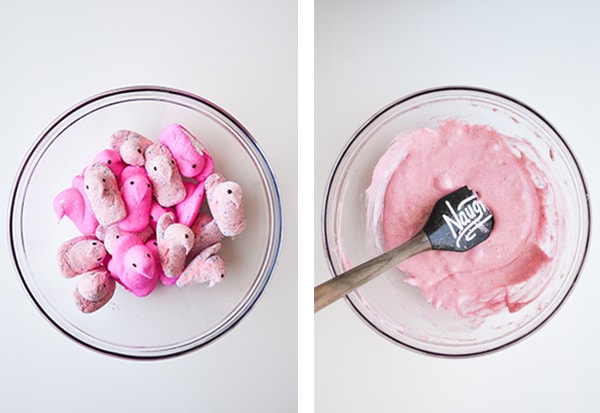 Let them fully cool and then cut into bars! 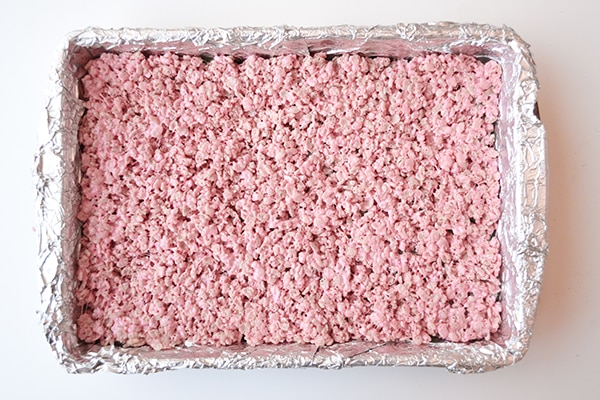 Did you make this recipe? Tag @letseatcakeblog on Instagram!

4.75 from 12 votes
Print Recipe
This Rice Krispie Treats recipe uses browned butter, vanilla, and Peeps to take the original recipe to the next level!

- If you don't have a 9" x 13" pan, you can use a 9x9 or an 8x8 pan. The bars will be taller, but just as tasty.
- If you want to use flavored marshmallows, go for it. I used one box of cotton candy ones for these.
- Recipe inspired by Yellow Bliss Road's layered Peeps Treats!

Nutrition Facts
Peeps Rice Krispie Treats Recipe
Amount Per Serving (1 bar)
Calories 91
* Percent Daily Values are based on a 2000 calorie diet.
Course: Bars, Dessert, Easter
Cuisine: American
Author: Rebecca Swanner
Did you make this recipe?Leave a review below, then take a photo and tag @letseatcakeblog on Instagram so we can see it!

What’s your secret to making the best Rice Krispie Treats? Tell me in a comment below!

Latest posts by Rebecca Swanner (see all)
As an Amazon Associate we earn from qualifying purchases. This post may contain affiliate links from Amazon and other sites that we collect a share of sales from.
739 shares